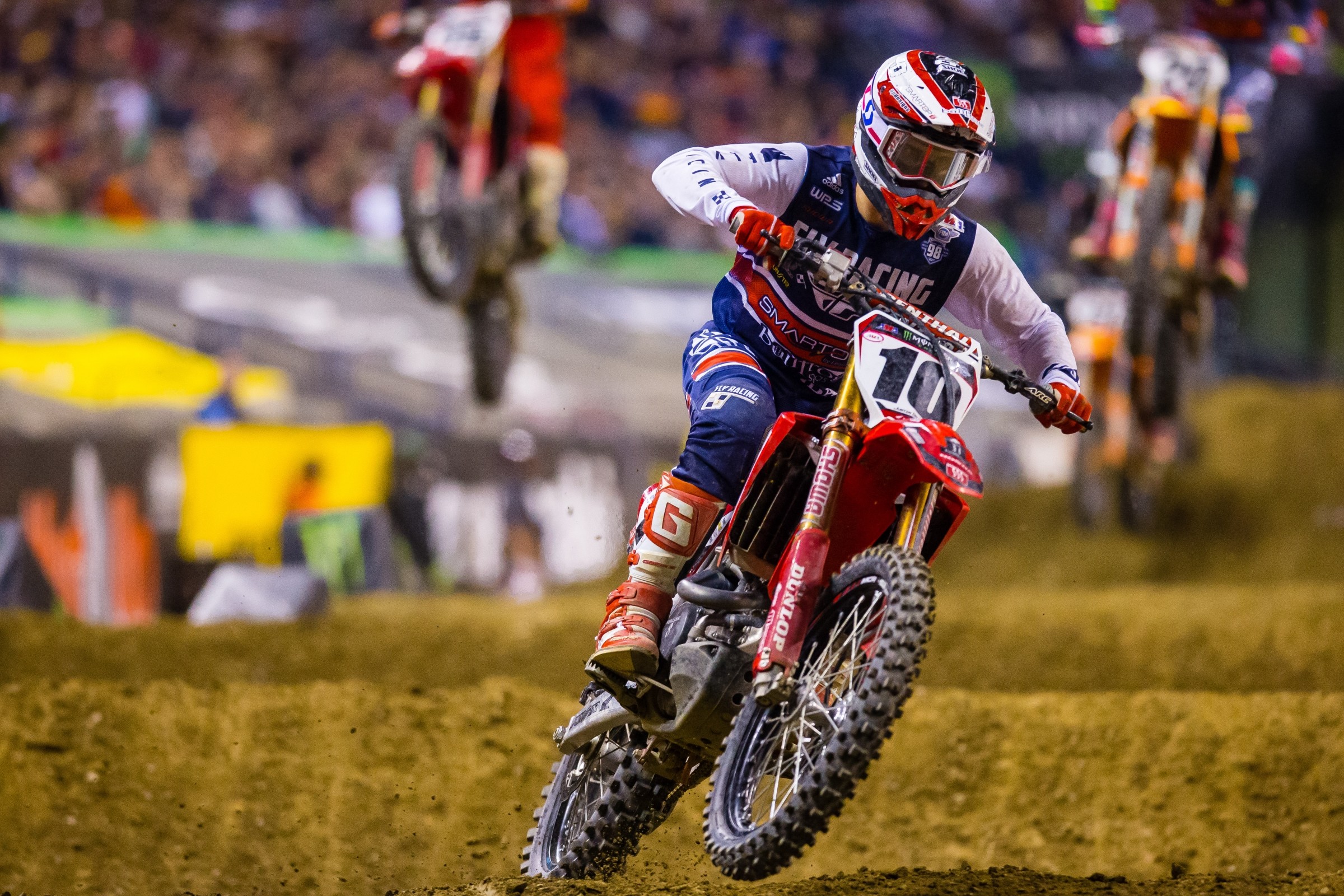 Justin Brayton’s been very good lately, and we’re not just talking about his first career 450SX win a few weeks ago in Daytona. He’s won every single heat race he’s been in since Daytona (three in a row!), he rode his way to a podium finish in Indianapolis, and in the last four races his average finishing position is third. That’s remarkable! If the current trend holds up, expect another podium ride from Brayton in Seattle. —Aaron Hansel

Racing hasn’t always been kind to Dean Wilson, who has seen his fair share of injuries throughout his career. This season hasn’t been any different, either—the Rockstar Energy Husqvarna rider hurt his shoulder at the very first race of the season, causing him to miss the first two main events of the year, and he’s been dealing with pretty severe shoulder pain since. He seems to be steadily improving, though, and even nabbed a career-best second in Indianapolis. And with the recent off-week to rest his shoulder, Wilson should be coming into Seattle feeling better than he’s felt since getting hurt at A1. —Hansel

Speaking of career bests, Broc Tickle was on his way to one in Indianapolis before Wilson came in hot and took him out in a corner. Tickle was able to get going again quickly, but the damage was done, and instead of possibly taking second, Tickle ended up fifth. The good news for Tickle is he’ll get another shot at it in Seattle. We’ll see if he can reclaim that podium finish this weekend. —Hansel

Any time Monster Energy Supercross heads to Seattle, there’s always a chance of rain, and right now that threat is looking pretty strong. Dealing with rain is nothing new for the track crew, who have almost always been able to deliver a fantastic racing surface despite heavy precipitation, but if the rain is coming down when racing is underway, things are going to get sloppy. Which, in addition to providing some pretty entertaining racing, has the potential to cause a substantial points shakeup in both classes. —Hansel

Right now, things are favorable for Aaron Plessinger, who holds a nine-point lead over Joey Savatgy in second and has 12 points on Adam Cianciarulo in third. That said, a nine-point gap isn’t exactly a huge margin, either, and depending how things play out in Seattle, Saturday could prove to be a pivotal night in Plessinger’s bid for a title. If he can put some more points between himself and Savatgy and Cianciarulo, it’s going to be extremely tough for either one to mount a championship challenge in the two remaining rounds. But if he gives up even five or six points to either rider, it’ll set the table for an extremely close fight down the stretch. —Hansel

Josh Hill Is Back

When Josh Hill hung up his boots following a brutal crash at Daytona in 2015 and later accepted a job with Monster Energy, I don’t think anyone thought they’d see him back on the starting gate of Monster Energy Supercross. Since his retirement, Hill has stayed active in the sport—racing Red Bull Straight Rhythm and more recently arenacross in Canada, and has also expanded his repertoire by racing snow bikes—but never hinted at a return to supercross until recently. Hill was going to race his hometown race on his own, but then factory Yamaha made the surprise announcement that Hill would fill in for the injured Justin Barcia this weekend. Hill, who began his career with factory Yamaha, told us earlier this week he’s just been focused on himself while preparing for the weekend. “I’ve seen [Aaron] Plessinger and the Star [Racing Yamaha] guys ride out here and they’re blazing fast. I don’t know where I stack up with those guys. I purposely didn’t pull out a stopwatch because they look so fast. I didn’t want to hurt my own feelings.” Let’s see how Hill performs in his first race back. —Chase Stallo

Speaking of returns, Blake Wharton came out of retirement at the 250SX East/West Showdown in Indianapolis and ran inside the top ten for much of the race before finishing 14th. Not bad for his first race in four years. “We knew that there’s only so much you can do without racing. It takes racing to get really that race shape back and that cardio,” Wharton told Steve Matthes after Indy. “We only had a month on supercross with the IB Corp guys to get ready, so that’s not a lot of time, either.” Remember, Wharton’s 14th came against a stacked East/West combined class. He’s back facing just the West Region this weekend, so we’ll see if he can put in a top-ten finish. —Stallo

If it seems like Jason Anderson has held a monster points lead in 450SX for forever, it’s because he has. Anderson has controlled the series since taking over the points lead following his win in Houston. With just five rounds remaining, Anderson holds a 35-point cushion over Marvin Musquin. If there is any cause for concern, it would be the weather at upcoming races like Seattle, Foxborough, and Salt Lake City. As Hansel mentioned above, it looks like Anderson’s first test will come this weekend. —Stallo

If you’re looking for a sneaky fantasy pick for the weekend, look no further than Monster Energy/Yamalube/Star Racing Yamaha’s Mitchell Oldenburg, who is expected to race Saturday for the first time since Oakland. Oldenburg began the year with 6-6-5 finishes and finished on the podium a year ago in Seattle. Speed is never a question with Oldenburg, but the long layoff could be. Monitor his performance in practice, but Oldenburg should be a solid pick for the weekend. —Stallo

Joey Savatgy let a huge opportunity to make up points on Plessinger slip through his fingers in Indianapolis. With the points leader down in the first turn, Savatgy had to smell a huge points gap coming. Instead, Plessinger charged all the way back and even picked up five points. “It was tough to not capitalize on the opportunity to make up valuable points in Indy, but that gives me even more motivation to come out swinging in Seattle,” Savatgy said in a team statement this week. Down nine points with just three rounds remaining in the championship, Savatgy needs to begin making up points this weekend. —Stallo