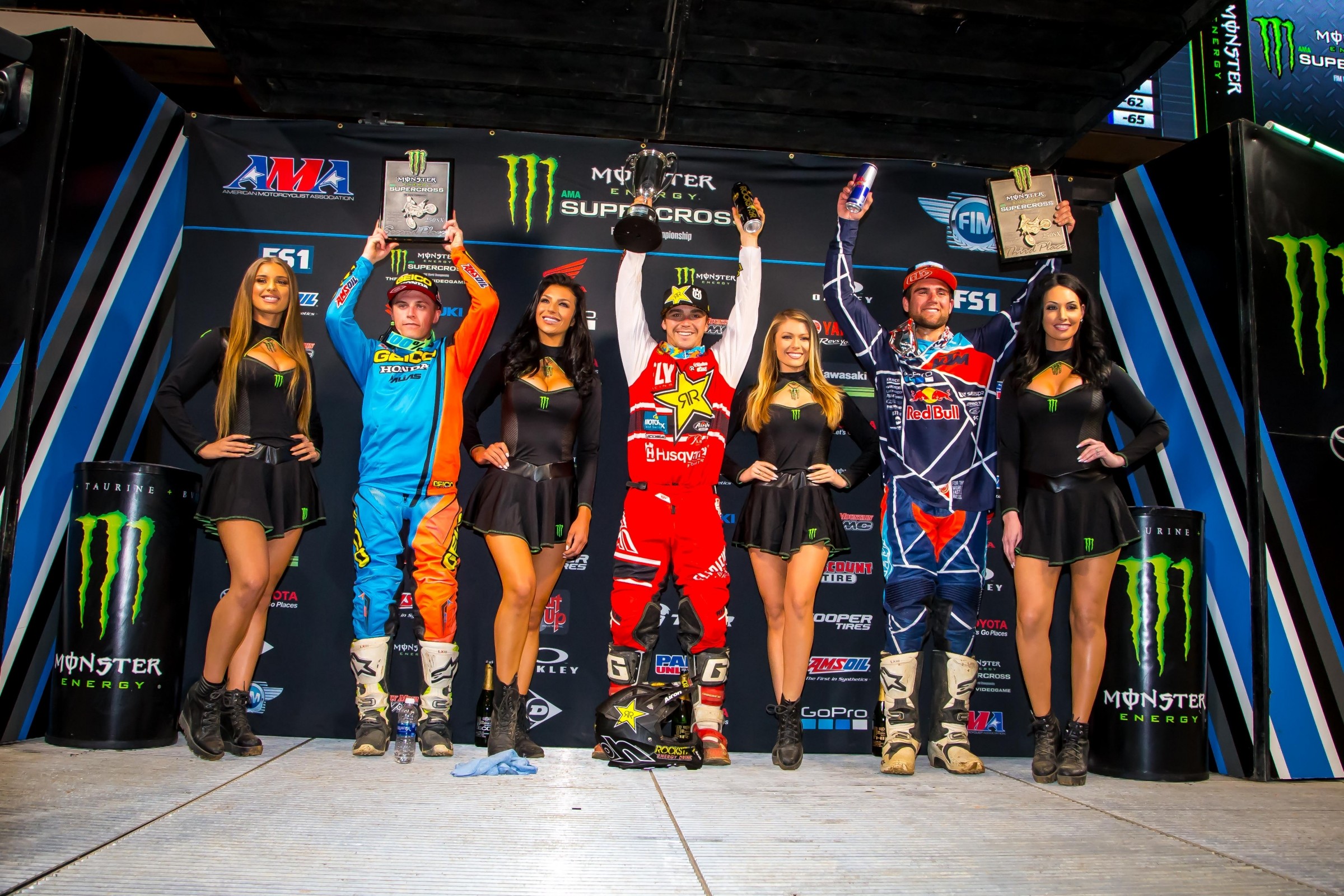 Racer X: Jordon, congratulations. Had a crash in that heat race that kind of set you back early, and then things didn’t really seem to rebound from there all the way. Was that part to do with it, or it was just one of those nights where things were a little off?
Jordon Smith: Yeah, I felt really good in practice all day. The best speed I’ve probably ever had at a race. Went down there in the second turn in the heat and was just really playing catchup for the rest of the night from there. With the tunnel being in between the starting gates, it was tough being on the outside. I was a really, really long ways out there. Didn’t get off to a very good start and just tried to salvage what I could.

Jeremy, congratulations. It looks like we got some momentum building now. Atlanta, we had that main event win in the Triple Crown. Daytona, and here again. Do you feel like things are coming around this season and we’re getting closer to a win?
Jeremy Martin: Yeah, we’re here fighting for it. These guys are good. I felt really good in practice and I was fifth fastest. I felt like I was going David Huckerchief, and these guys were still faster than me. I just put my head down, and every time I go out there I just try to fight the boys.

Zach, congratulations. Early in that main event, you got yourself behind Austin [Forkner] there. You guys were kind of pacing each other. Was there something on the track that you saw as maybe a spot you could pass? We know he went down, but were you kind of sizing things up and maybe seeing something that you could use to make a pass?
Zach Osborne: Yeah, I felt like he kind of gapped me a little bit three or four laps in, and then I was able to kind of find my feet and make some places where I felt like I could kind of hammer and get close to him. So, I knew that we were only sort of halfway in and I still had plenty of time. I was just trying to be a little bit patient and kind of let it come to me. Then obviously he went down, so it was a bummer for the race, but it made it better for me.

Jordon, last week’s win was great, but it seemed like it kind of got lost amid the tie in the championship standings between Zach and Austin. After that win, plus your third place tonight, you’re in the hunt again just like you were last year. What is it about finding these consistent rides midway through the season that you’ve been able to put together these last two years?
Smith: We’ve kind of got everything dialed in a little bit this year. Just bringing what I’m doing at the practice track to the race track and getting good starts again like I was last year. The first two races weren’t great starts, and I’m getting better at those. Just trying to put in solid rides. It sucks on a night like tonight where we lose points to the leader. That’s not what we want to do, especially in a short series. So, can’t have too many nights like tonight, but try and put it back on top of the box next weekend.

Jeremy, you just said that you were putting everything you had into it and the other guys seem like they were still a little bit faster. How do you mentally overcome that, and what do you work on to improve that for next week?
Martin: I can’t control these guys or what they’re doing or what they’re thinking. All I can do is focus on me and what’s going on. Zach and Forkner got away a little bit there. I was like, we’re settling in for the long haul. That’s what we did. We just kept fighting. I just did the best I could do.

Let’s talk about that quad. J-Mart, I didn’t see you do it at all. If you did, let me know. But you two guys, how was it? What’d you think about it? Were you looking at other guys to pull the trigger first? Or did you think during track walk, you could jump it?
Osborne: On track walk I was like, there is no way anybody is jumping quad out, and I bet JT five bucks that no one was going to go triple, triple, triple. So, I lost that five bucks and I ate my words on the quad. I saw Mookie jump it in the first timed session and then I went back to the truck and I watched my video from the first timed session and I thought that I should have jumped it. I was all antsy between practices wanting to go back out and do it because I just felt like it would make the track way better and flow way better than singling into that corner, and it did. It was huge. For me, it was wide open and I had to pretty much ice that triple before. It was tough. It’s probably the biggest quad I’ve ever jumped, but you got to do it.

Smith: Same thing. After I heard Mookie did it, I was not expecting any of us to do it. Then the B group went out and Osborne did it first lap. He didn’t even look at the track. He almost made it. I’m like, well, if he almost made it we’ll probably be able to make it. I did it pretty early in the practice, but I didn’t enjoy it very much, really. It was a pretty scary jump. In practice I actually came up a little bit short on it and almost ended up in the nets, but was able to just keep it in the Tuff Blox.

Zach, talk about that section after the finish line where Austin went down. It looked like it might have caught you a couple times also.
Osborne: That dragon was really strange. I wouldn’t even really call it a dragon. It was like two rollers into a big lip or something. I don’t know, it was just weird. Then in our main, it got a bunch of really soft, funky ruts in it. It caught me off guard two or three times where I was pretty nose-heavy and I wasn’t sure if I was going to pull it off. You’d come into that thing with so much speed off the finish line, and then you almost had to check up a little bit to go slow enough because you couldn't really just skim off of it. It was just a strange setup. It’s also pretty mellow, so you didn’t have to really respect it a lot. You could kind of hammer it, but at the same time you had to really pay attention. It was just a strange little section.

Next weekend we’re heading up to Indy. That’s going to be that showdown. I want all three of you guys’ thoughts about going back against the West Coast guys. You got two times this year you’re going to do that.
Osborne: For me, I can’t get too caught up in the East Coast/West Coast thing. I’m here to win a championship on the East Coast. I just need to focus on myself and not let any ego get in the way or in play. It’s pretty straightforward on my end.

Smith: For me, I feel like a lot of guys have gotten hurt on the East Coast now, and it’s a little bit harder to make up points. I think it gives me a good chance to put in a good main event next weekend and make up some good points on the championship and see what happens. But you really can’t worry too much about the West Coast guys. Just do our thing.

What about you, Jeremy? Your brother, you’re going to go up against him. You got any side bets?
Martin: No, he’s not racing, but even if he was here, I’d smoke him. It should be wild. Look at the East Coast guys. We’ve been KO’ing ourselves, it seems like, just in our series. Get the West Coast guys in there and get a little different flavor. It should be a good night of racing.

I want your thoughts on the split start today. We’ve seen it at the Monster Energy Cup with split starts and you kind of come around and you funnel down, but this was a little bit different. Did you like it?
Osborne: I liked it. I liked the over/under thing. I think that should be every weekend. If not over and under, at least over. Those things are cool and they’re fun to jump. I think it’s a really cool piece of the track that we should make almost mandatory. It’s just a good thing. The split start, as far as that goes, it’s a little bit strange because it seems unfair because it’s so far, but this start was really fair. I think he [Jeremy] was outside the box in the heat race and almost pulled the holeshot. It was pretty cool.

Martin: I thought the start was fine. Was there any first turn crashes today?

Not at all.
Martin: It was a nice, sweeping turn too. It wasn’t a 90 followed by a tight 180, like at Dallas. It was actually built right. I think it was fine.

Smith: It was tough for me having 14th gate pick. I was pretty far outside and felt like I was a little bit behind the eight ball before the gate even dropped. It was tough being way out there, but just had to make do with what you got.