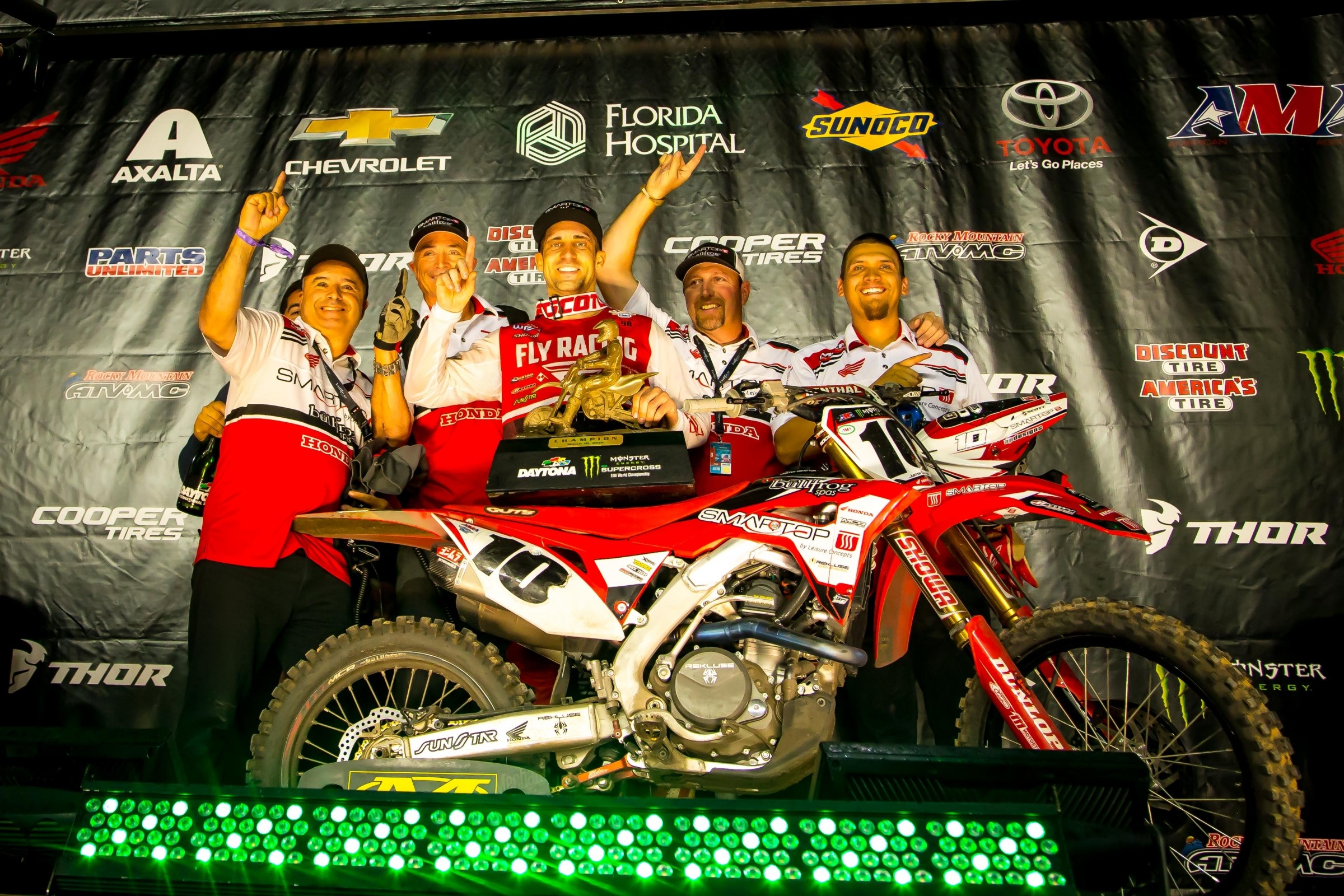 Justin Brayton’s win at Daytona Supercross on Saturday was not only the first win of his career, but the first for Smartop/Bullfrog Spas/MotoConcepts Honda.

After the race, we had the chance to talk with team manager Tony Alessi about the win, the team, and more.

Racer X: This one is hard to classify. You’re not a privateer effort, but it’s not a full factory effort. These types of wins don’t come along for these types of teams very often, though. It’s a pretty big deal.
Tony Alessi: Right. What we are, is we’re an American Honda supported team, which means that we build our own bikes. We do our program. They help us with OEM parts, obviously motorcycles, and intel. They don’t always go, “Here’s the part,” but they can clue us in on, “This is something that you should probably build.” We’ve been given diagrams and such, so there is support. A lot of their material is classified. You can’t have that.

So, they can just kind of nudge you to make your own version almost instead of handing you the thing?
That’s right. So, obviously, that’s helpful. So that, combined with us not having to race motocross, we have summers to develop material. Obviously, Justin [Brayton] is a big part of that. There’s no pressure of having to be rebuilding motors and everything that goes along with that. We got all that time.

You guys are working that whole time?
Yeah, we’re working that whole time. It’s basically just rebuilding our program from the year before and developing as much new stuff as we can develop based on what they’re telling us from the year before. I have things on my list right now that need to be worked on for this summer, for next year, based on what they’re telling me that they want. It’s not easy, but our job is to get them what they want, and, obviously, to strive always to make things better. So, that’s our opportunity and our window to do it without the distraction of still having to race every week and travel every week and kick stuff every week.

So, this shows how long it takes to make this stuff. They ask for it now and you’re not like, okay, we’ll have it by next weekend? It doesn’t work that way?
No. Right now I’m working on something for Justin and it’s a month in progress right now, and it’s still not where it needs to be. Realistically, it may not be there until the summer. These are things.

So, your team has won a supercross race in the premier class at the top level. What’s that like?
It’s amazing. To be honest with you, to win a supercross race at the top level, this is something that every team—not just ours, but every team—strives to accomplish. To beat major factories with huge budgets and tons of staff and for us, our little train to chug along and keep trying to work closer to those guys and to finally accomplish the ultimate goal, is amazing.

It all kind of started—you brought him over. It brought credibility to the team. He said you guys were solid to work with. That was probably even a factor in Jake Weimer coming over. Basically, in the pits now, you guys are highly respected, kind of starting with him saying, “I’ve been on a lot of teams. These guys are legit.”
Yeah. We worked on it four months before he was actually on the team. He was riding at Club and my son, Mike Alessi, was riding at Club. So, I had a chance to hang out with him a lot. I was pitching some ideas to him. I said, “Look, I think we can do something good for you and you for us.” He bought into it. My team owner bought into it. Honda factory bought into it, and here it is. This is the flower, I guess you could say, of something that we put together a couple of years ago.

You’re a team manager who's won races now. I told you, we’re going to forget that you had a kid that raced. You’re just going to be team manager Tony at some point.
It’s crazy.

You guys won a race!
It’s crazy. I always told Mike that we could win races—even though he never won a championship or anything, but he did win races. I felt like we had a lot to do with steering him in the right direction. Obviously, there’s a lot that’s learned from all of that, which I was able to apply to Justin, who is way more whatever you want to call it—adhesive to this. It’s harder when you’re dealing with your kid because it’s different. But when you’re dealing with a professional rider that’s not your kid and you present ideas for him especially cohesive, it sticks. Then he believes and I believe and we make it happen. It’s working good.