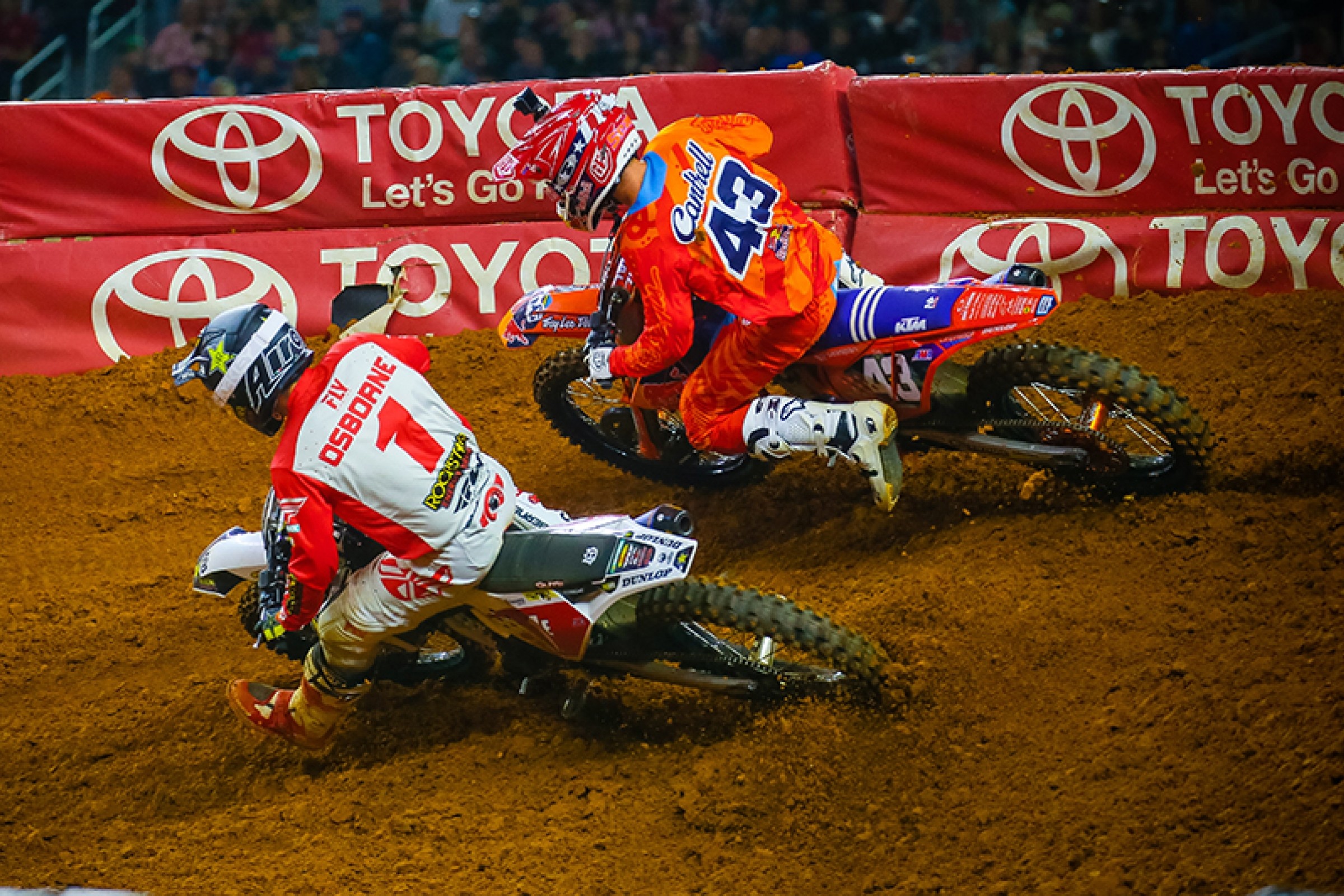 One race doesn’t make a champion, but the defending 250SX East Region Champion sure looked good on his way to winning the first race of the season. Even after a small crash early in the main event, Zach Osborne still ripped his way up to the front and won by a comfortable margin over Colt Nichols. Even scarier for the competition, Osborne said he didn’t feel that great afterward, describing his riding as mid-range. If that’s what happens when he’s not firing on all cylinders, what’s it going to look like when he’s in the zone? —Aaron Hansel

Thirteen laps. That’s how many went by with RJ Hampshire in the lead last Saturday in Arlington. Then, after Osborne was able to get by, things came apart. Hampshire crashed, lost several spots, and ended up in fourth. By itself it’s not a bad result, but not even being on the podium after leading over half the race has  to sting. Let’s see if Hampshire, born and raised about 30 minutes from Raymond James Stadium in Tampa, can wash the bad taste of Arlington out of his mouth with a podium ride at home. —Hansel

Things couldn’t have gone much better for Jimmy Decotis in Arlington—the Autotrader/Yoshimura Suzuki rider nailed third, his very first career podium, in the first race of the season. Even more impressive and inspirational, Decotis did all this after laying in bed for three months fighting Lyme disease last year. It’s crazy that he’s even racing a dirt bike again at a professional level already! If he keeps it up, this is going to develop into a fantastic storyline. —Hansel

Need more feel-good stories? The Colt Nichols one is pretty good too. Nichols, who’s had to deal with tough injuries several times already, broke his arm in December and wasn’t sure whether or not he’d even be able to race in Arlington. Coming into the weekend, he was simply hoping to put it in the top ten and salvage some points. Well, salvage points he did—23 of them, to be exact—by taking second place. Like Decotis’ situation, this is going to be a great story to follow if Nichols keeps it up. —Hansel

Things have been going very well for Blake Baggett lately, who logged his third straight third-place finish last week in Arlington. If you’re counting, Baggett’s already logged more 450SX podiums this season than in all of his previous seasons combined since jumping up to the 450 in 2015. The one thing he hasn’t done is finish higher than third, but he’s been close at times this season. With the kind of speed and consistency he’s shown lately, it’s hard to think he won’t take second, or even a win, sometime soon. —Hansel

Following San Diego, we made a graphic of Eli Tomac’s start to the season and it looked an awful lot like a graph of the stock market this year. It also took ANOTHER massive swing last weekend. After a 22nd-place DNF in San Diego (his second of the year), Tomac bounced back to win in Arlington (his third of the year). How has Tomac handled his strange start to the season? “It totally sucks, just because the amount of time you put into it,” he said in the post-race press conference. “We all put in that work, but it’s tough when you put in three months or whatever it is for getting ready for the season and you got your hopes high and then all of a sudden, you’re 70 points down out of the lead. It’s a place I never want to be in, but here we are. At least we’re back to winning races.” Can Tomac make it back-to-back wins for the second time this year? —Chase Stallo

Justin Hill will finally get his wish this weekend. The defending 250SX West Region Champion has never hidden the fact he prefers—and wants to ride—the 450. He’ll move up full-time next year, but in the meantime, he’ll get to race a few rounds this year while the West Region is on break. With Hill a longshot to defend his 250 title, the move makes sense, as the team and Hill can get an early jump on settings for 2019. “I don’t have to ride it like I’m in desperation mode. I get to ride this bike the way I feel like a bike should be ridden,” Hill told us earlier this week. “That’s how I want to ride, and that’s how I ride when I’m riding well.” Where to you think Hill will finish in his 450 debut this weekend? —Stallo

Bowers Gets the Call

With Josh Grant out for the foreseeable future due to a fracture in his right leg sustained in qualifying at Arlington, Monster Energy Kawasaki called on a familiar face to fill in—Tyler Bowers. The former Monster Energy/Pro Circuit Kawasaki rider also filled in for Grant back in Lucas Oil Pro Motocross in 2016, when the latter underwent ankle surgery. Bowers will certainly undergo an adjustment period, as the factory bike is much different than his privateer Kawi, but he’s familiar with the surroundings, which will go a long way. Will the move improve his results this weekend? —Stallo

Monster Energy AMA Supercross returns to Tampa for the first time since 1999, and it’s bringing a ton of sand with it. Check out this time lapse of the track build (via @RaymondJames Stadium) and you’ll see an entire section this weekend will be made up of sand. Will the section play a big part? —Stallo

No question: Martin Davalos was fast all day at the opener and was definitely a contender to win in 250SX last weekend. Alas, he and half the field were taken down off the start and he DNF’d, putting him in a 25-point hole just a round in. The team said Davalos will be a race-day decision (they did not specify why) for round two. “I’ve done everything I possibly can to try and be ready for round two, but we’ll just have to wait and see on Saturday morning how I feel,” he said in a statement. “If I have anything to say about it, I’ll be racing!” We’ll see if Davalos is able to line up tomorrow. —Stallo