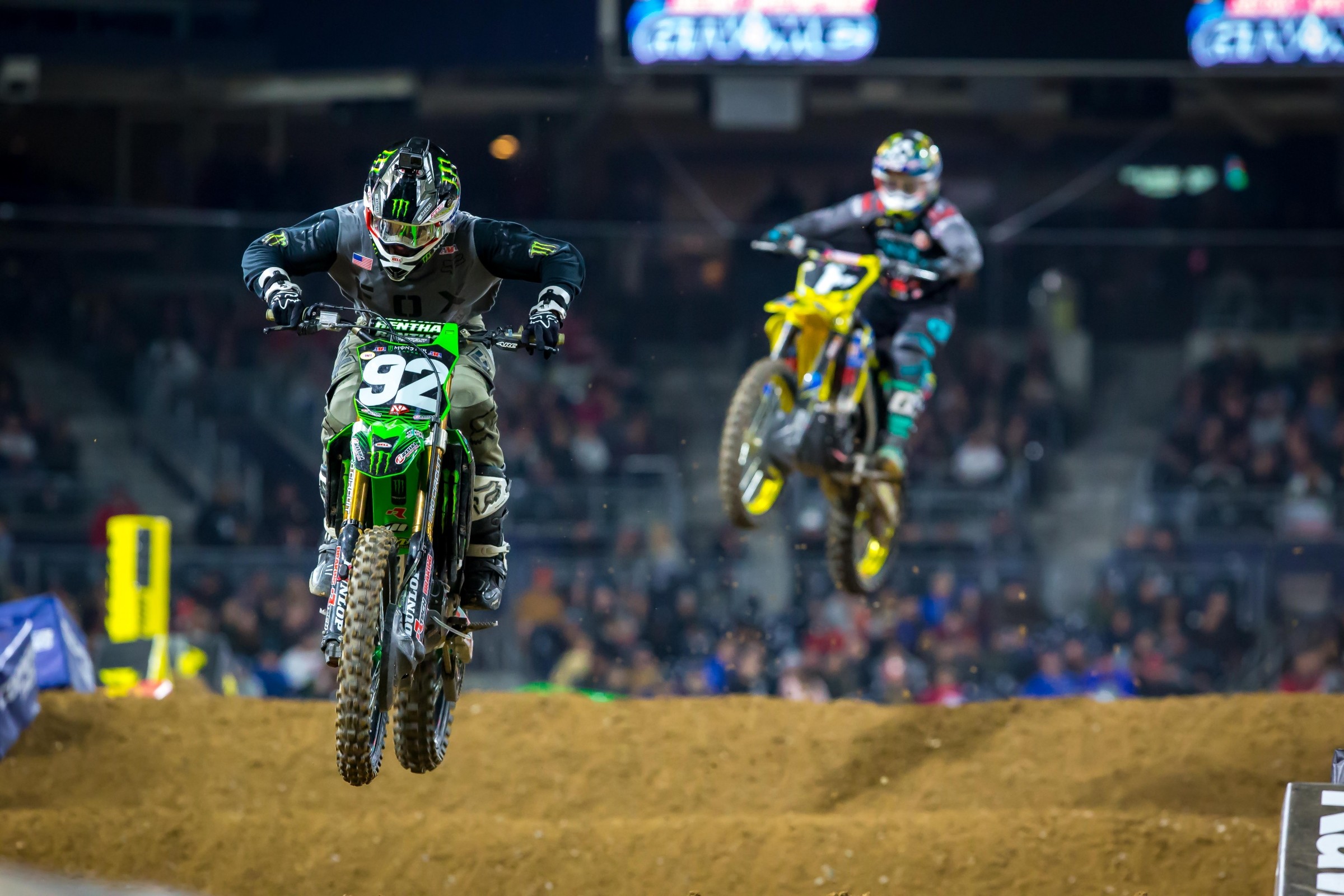 A lot happened at the sixth round of Monster Energy Supercross. Jason Anderson and Marvin Musquin continued the fireworks show from last weekend both on the track and in the press conference, Ken Roczen and Eli Tomac both crashed out of the main event, Justin Hill got his first win of the year, Joey Savatgy made up some ground in the championship, and Chad Reed got himself that much closer to  the all time starts record.

Let’s dive into the lap data from San Diego to figure out how these races were won and lost with this week’s Sign of the (Lap) Times. First, our traditional lap time charts.

After Musquin dropped like an anchor during his heat race, it wasn't a reach to say he wasn't going to be able to hang with Jason Anderson in the main event. And after Musquin took a shot at Anderson on the very first lap, it looked like he was going to fade toward the middle of the pack like he did in his heat race.

But around nine laps into the main event he found his groove and worked his way up to second and then inched himself toward Anderson. You can see Anderson had two laps in the high 53 second range, and this is where Musquin did most of his damage.

"On the far side there was three table single before the triple," said Anderson. "I think it was Mookie that crashed right there. I kept kind of hacking that section a little bit. These guys were riding good and they came up on me."

Take a look at their lap times below.

Adam Cianciarulo and Justin Hill put on a show for the fans in the 250 main event as both were looking for their first main event win of the year. AC looked to have it handled for the first half of the race, but then he started to make some little mistakes that cost him some time.

"I used a lot of energy in the beginning of the race and I got arm pump in my right arm a little bit," said Cianciarulo, who mentioned that Hill was able to ride more efficiently and use less energy to go fast. "I’m not going to say I wasn’t tired—it was a difficult race for me. I probably could have rode a little bit more efficient. I was a little bit out of control, but that’s what happens. This is the first time I’ve been up front all year, so I guess we’ll take it in stride."

Hill was able to stay more consistent when he got into the lead and it paid off. Take a look at their lap times below.

Because of all the craziness that went down inside Petco Park, Justin Barcia fading hard in the middle of the race because of a rear brake issue got overlooked. Barcia now sits second in the championship standings, 28 points behind Anderson, so losing these positions cost him some valuable points. Take a look at how far his lap times dropped off.

Eli Tomac is having a very strange start to the season. After coming in as the favorite to win the championship, he went 22nd-DNS and put himself in a huge hole. Then he started to climb his way out, winning two straight and reminding everyone of his five race win streak last year.

Now he's an even bigger hole as he finished 13th in Oakland and put up a DNF in San Diego after ripping a grip off in a crash off the start. We couldn't help but notice that his season finishes graphed out look an awful lot like a graph of the stock market this year. It's been volatile, lately. Check out the market results below, and then Tomac's results. The good news for those with a portfolio is there's been a bit of a rebound this week. Will Tomac get the same treatment?