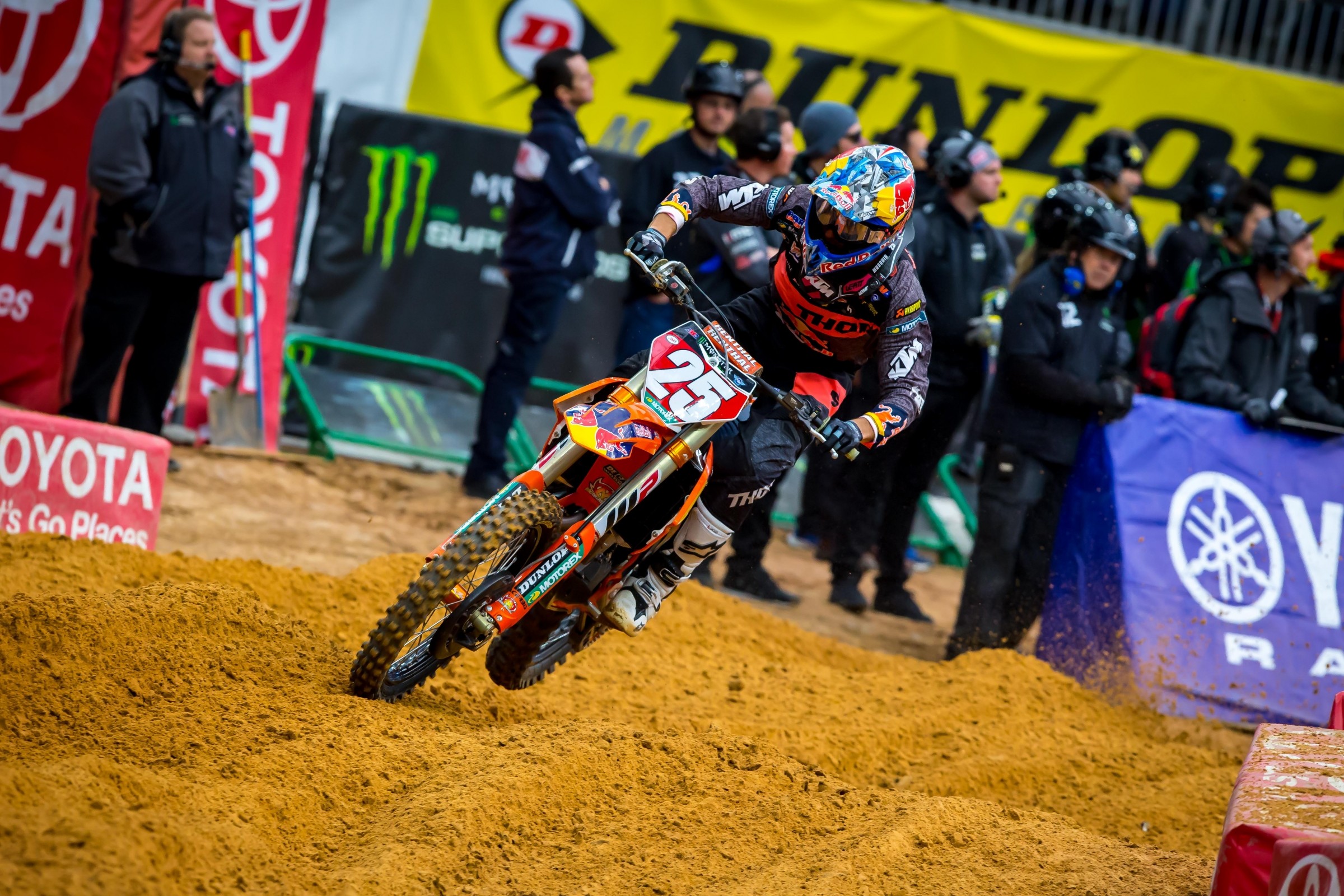 Comment: Bloss had a big crash at A1 and bruised his lungs and sustained a hairline fracture to his sternum. Amazingly, the team says Bloss is already back on the bike and is working toward getting back to racing. An exact return date is yet to be determined.

Comment: Bogle sustained a concussion at the 2017 Monster Energy Cup, then crashed again later during testing. Until he returns, Malcolm Stewart will fill in for him.

Comment: Hansen broke his foot during practice at the Monster Energy Cup. He was able to race Red Bull Straight Rhythm, but afterward was forced to take some time off. In an interview with Transworld Motocross, he said his goal was to be ready for A2.

Comment: Millsaps underwent surgery after fracturing his left elbow and suffering a concussion during practice before the Monster Energy Cup. He’ll miss at least the first six rounds of Monster Energy Supercross.

Comment: Musquin crashed in his heat race in Houston and was unable to race the main event due to a hurt shoulder. We have yet to receive official confirmation whether or not Musquin will be racing this weekend.

[Update: Marvin's plan is to be at A2, ride practice, and see how he feels from there.]

Comment: Noren will be back racing at A2 after having a broken collarbone plated before the season.

Comment: Tomac crashed at A1 and incurred a shoulder contusion. He tried to go out for practice and qualifying the following week in Houston, but wasn’t able to race the night show. At time of posting, his official status was still day-to-day.

[Update: Racer X has heard from multiple sources that Tomac will attempt to race this weekend at round three in Anaheim.]

Comment: Weimer fractured his right wrist, broke his left scapula and left elbow, bruised his ribs and right lung, and collapsed his left lung before the season. He’ll miss A2, but is “100 percent in for Glendale.”

Comment: Wilson had a rough crash at A1 in which he suffered a shoulder contusion, a strained rotator cuff, some bruising, and a sprained wrist. He missed Houston but is in for A2.

Comment: Cooper crashed in Houston and broke nine ribs, hurt his shoulder, and suffered a concussion. Right now, the team is expecting him to be out for at least four to six weeks.

Comment: GEICO Honda's Christian Craig sprained his ankle during practice before Houston, but was somehow still able to soldier his way to a fifth. Considering the extremely swollen state of his ankle, that’s pretty amazing. He’ll be back at it again at A2.

Comment: Forkner cased a rhythm in November and crashed, which resulted in a broken wrist and collarbone. He’s expected to be ready for the start of the 250SX East Region.

Comment: Martin incurred a hairline fracture to his collarbone at A1. At first it was thought to be an old break, but further inspection revealed it was indeed a new break. He’s out for A2.

Comment: Nicoletti crashed at A1 and got run over. He incurred a broken rib and two displaced ribs. He gutted out the pain in Houston and is in for A2.