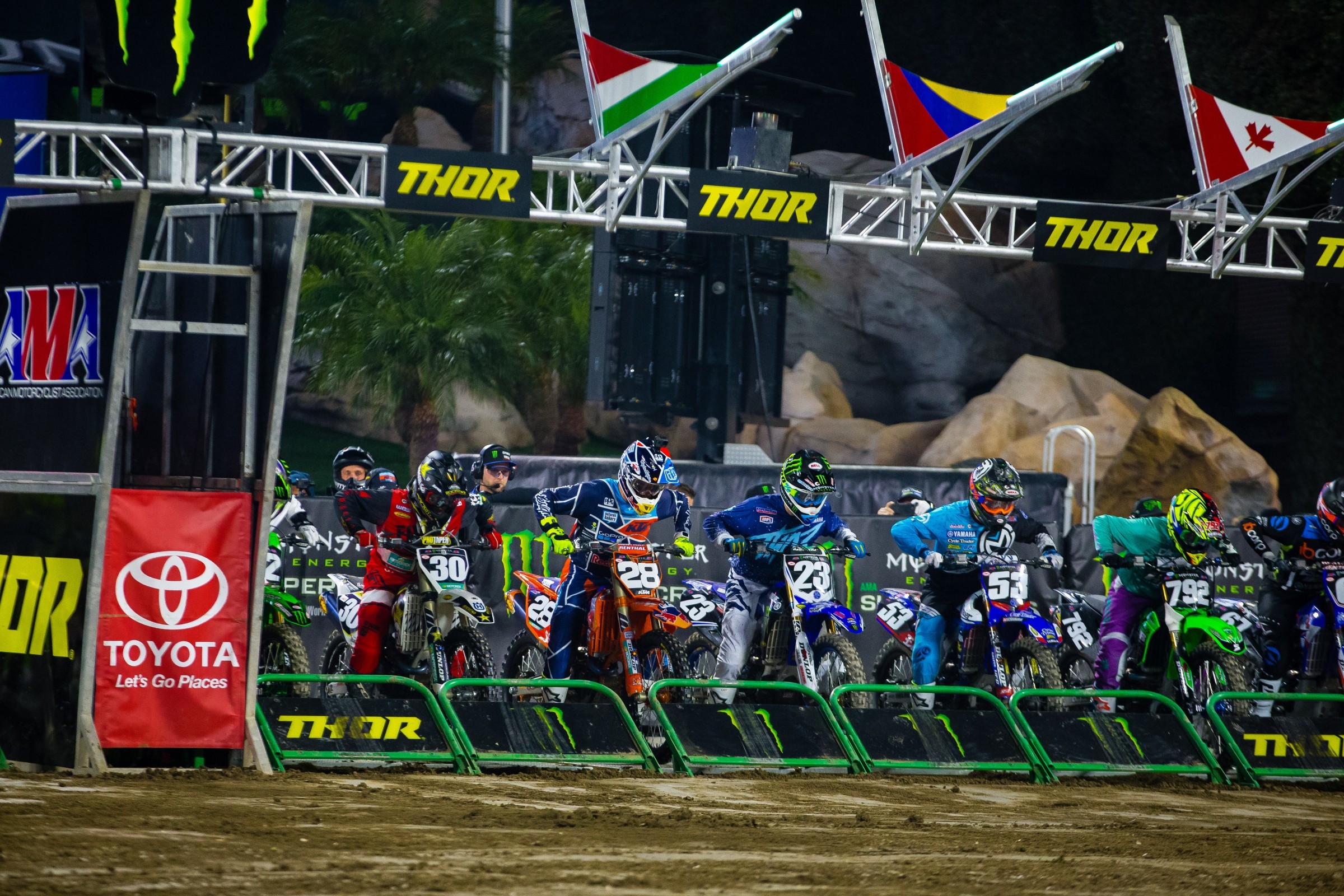 After winning round two in Houston, Jason Anderson now has the points lead. It’s not the first time he’s had it—he won the opener in 2016—but this time, the circumstances surrounding him are different. He doesn’t have to contend with the strangling pressure of Ryan Dungey’s never-ending podiums, and two of his biggest competitors, Eli Tomac and Marvin Musquin, have already suffered major setbacks. He also seems to be approaching this season with a renewed focus. After winning in Houston, he said it was time to start having good nights like that more often to be a championship contender. Anderson hasn’t always been ultra-consistent, but right now, it’s hard to think he’s not going to be in the hunt again at A2. —Aaron Hansel

As impressive as Anderson’s win was, Aaron Plessinger’s victory may have been just as remarkable. Plessinger was all the way back in tenth after one lap, forcing him to work his way through traffic on a tough track against some very fast competitors. But Plessinger somehow made it look easy, earning not only the win, but the points lead as well. If he rides as well at A2 as he did in Houston, he should be sporting an even bigger lead at the end of the night. —Hansel

If we didn’t know any better, we’d say Justin Hill is doing his best to try to lull the competition into a false sense of security. Sure, he’s not known for exploding into the season opener with dazzling speed, but he’s also not known for getting tenth at round two, either. He did have a crash during practice in Houston, so it’s possible he was dealing with some pain, but no matter how you look at it, he’s already 20 points back of Plessinger after just two rounds. Unless he wants his title defense to slip away, he’s got to bounce back and ride like the champ he is at A2. —Hansel

Any time a rookie finishes inside the top ten in his first supercross, like Chase Sexton did at A1 with an eighth, it’s a good result. It was even enough for us to write about in this very column last week, but even then, we didn’t see a podium coming for the GEICO Honda rider in Houston. It wasn’t exactly handed to him, either—Sexton was sixth for a long time until he started making passes late in the race and took advantage of Adam Cianciarulo’s crash on the second-to-last lap to take over third. It’s too early to start calling Sexton out for automatic podiums, but after Houston, he’s certainly making a larger blip on the radar. —Hansel

Jeremy Martin has got to feel pretty good about his ride at Houston. Not only did he improve his result (he was 11th at A1 and tenth in Houston), he didn’t go backward at the end of the race like he did a little at the opener. Just the opposite, in fact. Martin rounded the first lap in 18th place and gradually worked his way up to tenth behind Josh Grant. Now that he’s got a pair of consecutive 450SX races in the rearview, we’ll see how the GEICO Honda rider does in his final 450SX race of the season. —Hansel

For the first time since 1985, Monster Energy Supercross will feature a new format tomorrow night in Anaheim. The “Triple Crown” format, which will feature three main events per class (think Monster Energy Cup), will debut for the first time at round three. Earlier this week, Jason Weigandt explained the format in great detail, so read that. If you don’t feel like going through the trouble of clicking on a different link, we’ll break it down really quick here.

Eighteen riders—for each class—will come from timed qualifying. The remaining four will come from the LCQs, which will be held prior to the night show. Tie-breaker will be third main event, and only one overall winner will be crowned (think Lucas Oil Pro Motocross). There ya go. Enjoy, this should be good. —Chase Stallo

How Healthy is Tomac?

How strange is the fact that through two rounds, Eli Tomac, winner of nine main events last year, has scored just one point, and is 48 back of leader Jason Anderson? Tomac attempted to ride practice last weekend in Houston, but pulled out early of both sessions and did not line up for his heat race. According to the team, Tomac is dealing with a shoulder contusion he sustained in a crash at the opener while leading. We’ve heard from multiple sources that Tomac will attempt to race this weekend. How healthy is his shoulder? Like last week, we probably won’t know more until practice. —Stallo

How Healthy is Musquin?

As of Friday morning, Marvin Musquin is still uncertain if he’ll compete this weekend. Jason Weigandt spoke with his trainer, Aldo Baker, who said Marvin will ride Friday and then a decision will be made to see if it’s possible he’ll race tomorrow. So, as of now, we’ll have to play the waiting game on Musquin’s status. —Stallo

How Healthy is Wilson?

After riding press day in Houston, Dean Wilson made the decision to sit out the race on Saturday with a shoulder injury, writing on social media, “I Just don’t feel I have the strength to race and wouldn’t want to put myself or anyone else in danger.” Wilson will attempt to return this weekend at Anaheim 2, but as with Tomac and Musquin, we probably won’t know how healthy he is until practice. —Stallo

The Bear is Back

You probably noticed that Tyler Bowers was absent from Houston last weekend. No, the Bear was not injured. He had a prior engagement to race the ADAC Supercross Championship in Germany (which he won), so he decided to skip Houston. After a 14th at the opener, Bowers will return to Anaheim this weekend seeking a second straight top-15 finish. —Stallo