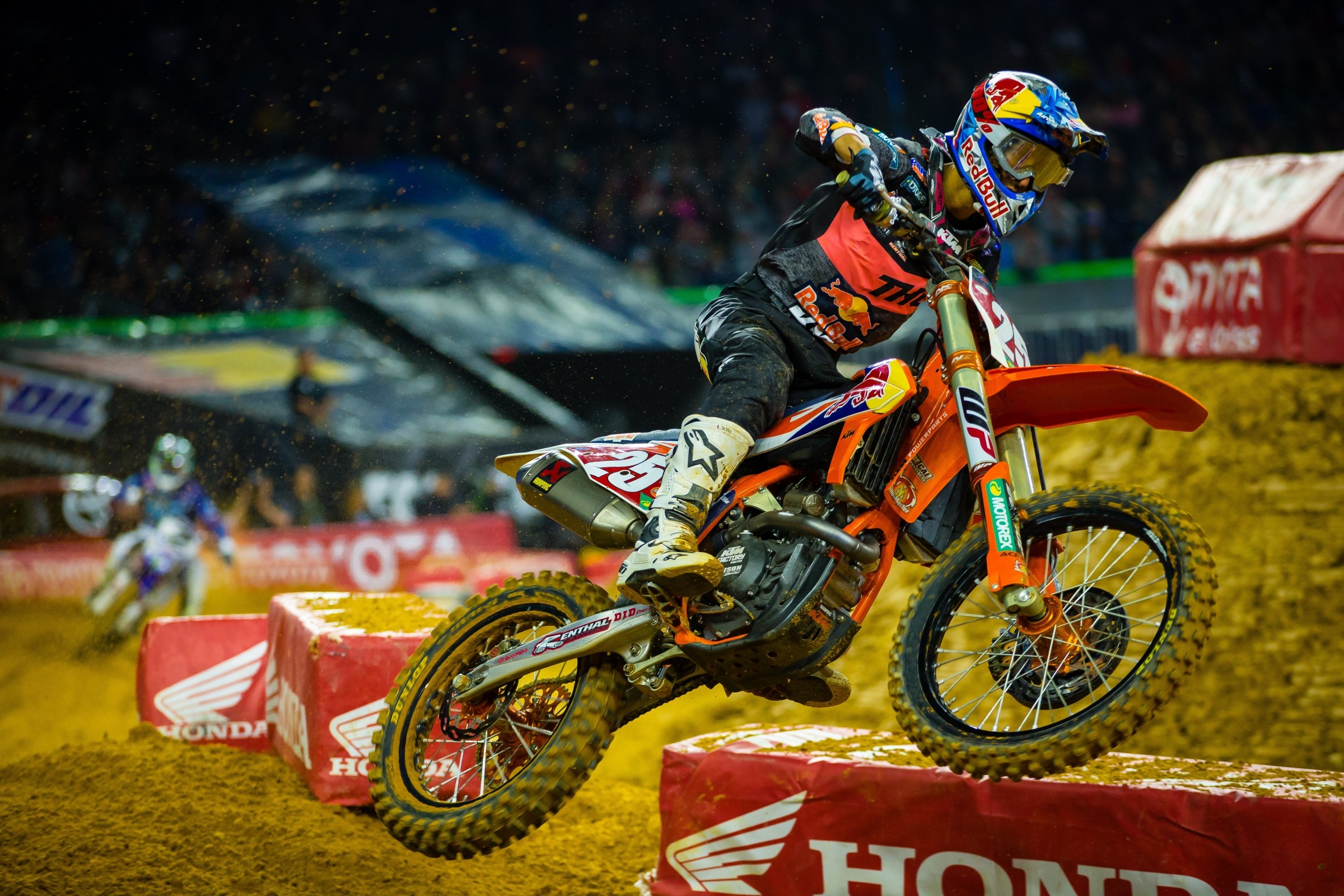 I was not good at blitzing whoops comparatively to where I would typically finish in main events. It would really stress me out, as my results were so dependent on the whoops that particular weekend. Had Dante ever been to a Roman round of supercross, he would have surely put “lasciate ogni speranza, voi ch’entrate” on the pit board for me as I entered the whoops. Sure, there were some cases where I was adequate. More often than not, though, I would have to find an alternate way to make it work.

Over the years as I watched Marvin Musquin’s successful career, I noticed several similarities in his approach. Those similarities were on full display in Houston on Saturday night.

For Marvin, the whoops are a hole in his otherwise incredibly strong skill set. He is incredibly good in the turns, an elite level starter, has a keen eye for determining the fastest way through a section, and has elite race savvy. Those skills have propelled him into championships and race wins over the past several years. The only weak spot I can detect is that if the whoops only allow elite-level blitzing, he doesn’t quite stack up to his championship rivals. I know this weakness well and can spot it a mile away. When you face a problem for 16 or 17 years—as I did—you know the symptoms and related problems. While Houston may not have been a perfect storm for his liability, it was certainly a dark cloud on the horizon.

[JT discussed Marvin’s potential liabilities in the whoops in our pre-season preview shows—start at 14:00 minutes to hear the discussion. The scenario already developed at the second race of the year. Have a look.]

The whoops in Houston were built in a worst-case scenario for a rider who wants to jump and find a rhythm. The bowl berm and straightaway leading into them built high speeds on the approach. For those who are good at blitzing, they simply got the front wheel light and carried all of that momentum right into the fray. For a rider wanting to jump like Marvin, instead of accelerating into the whoops, the opposite would have to happen. Coasting or even decelerating would be necessary to find the appropriate speed for jumping. As soon as the “jumper” decelerates, the “blitzer” will blow right past.

We saw that happen with Malcolm “Mookie” Stewart and Musquin in the early laps of that ill-fated heat race. Mookie was picking up speed on entry while Marvin was forced to check up. Halfway through the whoops, Mookie would ride right past the points leader and make the pass.

As this was unfolding, I was interested to see what Marvin would do in response. He was surely getting frustrated with having to pass and repass Mookie but he didn’t seem to have an answer in that long whoop section. By the halfway point, Marvin had been switching back and forth between blitzing and jumping, with neither really working. He was trying to triple through, but with the whoops having been rebuilt after practice, the bottoms of the whoops were still abrupt. That causes all sorts of issues for jumping whoops, and Marvin caught an edge and went down. He injured his shoulder and that was the last we saw of him for the night. Weirdly enough, his trusty and reliable jumping method is what bit him, but only because he felt forced to resort to it.

The elite riders he is capable of beating were all blitzing and making it work. He was struggling to match their speed and was being passed regularly in that spot (Justin Brayton and Mookie both made passes on Marvin in the whoops). The whoops just weren’t ready for jumping yet. That was the main problem. They hadn’t been rolled in by slower riders, and that’s what creates a smooth transition that allows jumping speed. He forced his fallback move a bit early and it bit him in the worst way.

The most agonizing part of this for Marvin had to be watching that main event. As the track continued to wear in, the whoops became a jumper’s dream. If you saw Aaron Plessinger doing his wheel tap-four-four, you saw how lethal it was. That is precisely what Marvin would excel at. He would have dominated that section, had he made it to the main event. As it played out, he crashed hard and now his entire season is in jeopardy. It just goes to show that timing can make all the difference in this sport.

Had Marvin be able to simply suffer through a tough heat race, he would have been all smiles during the main event parade lap. Whoop-jumpers (I consider myself an honorary board member of this club) can spot a jumping opportunity before most others will. We are always counting down the laps until the whoops are good and ready. It would have been open season for Marvin. Now it might be the end of his season. Supercross can just be that cruel sometimes.