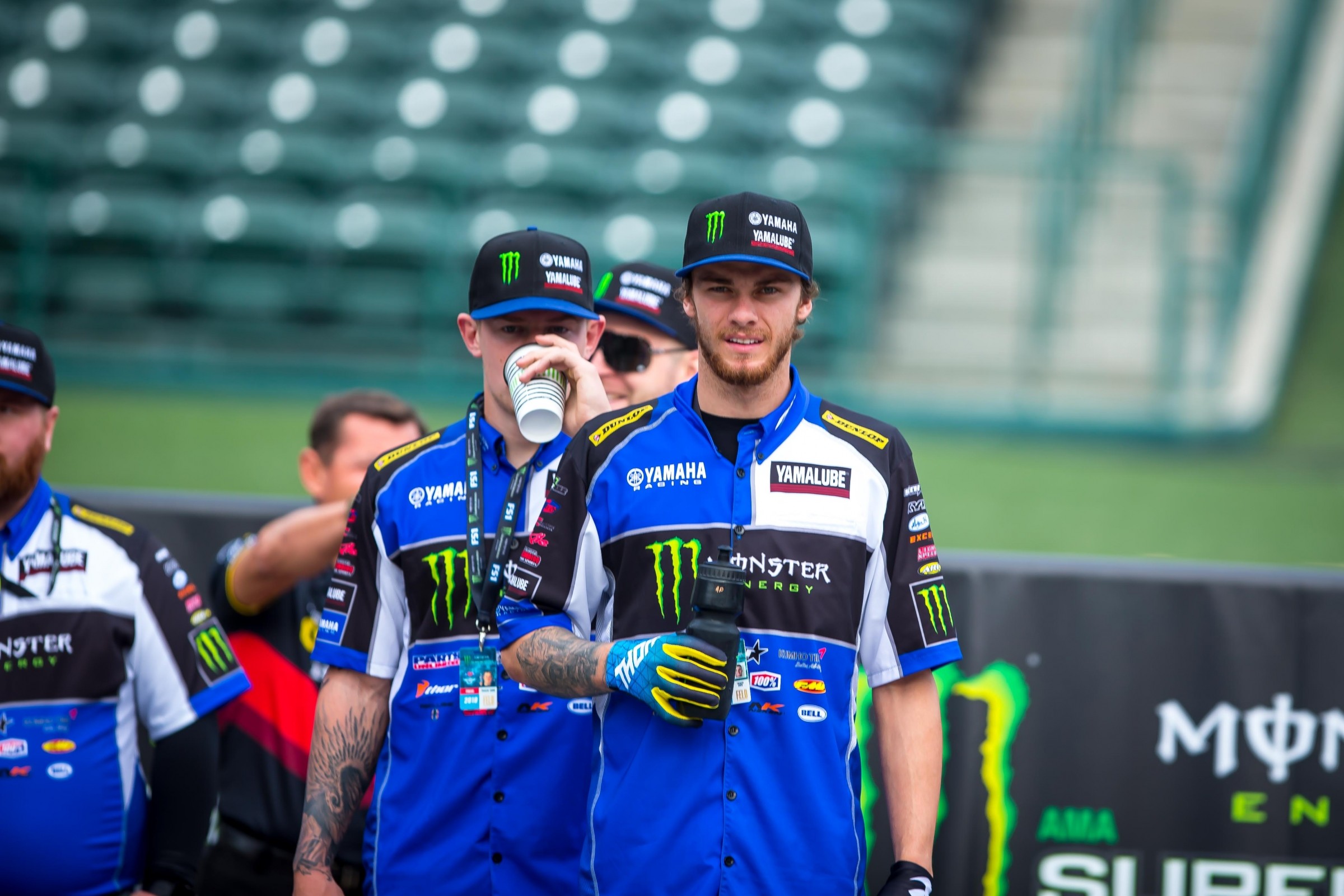 Three years ago, the 250SX West Region main event was playing itself out in Angel Stadium, when seven-time supercross champion Jeremy McGrath, standing beside me in the Knothole Club, pointed something out.

“That Plessinger kid out there,” offered McGrath, pointing down to the stadium floor at a rider who was running in third place aboard a blue Yamaha YZ250F, “he can really ride supercross.”

Yes, Showtime McGrath certainly had it right. Three years later, Aaron Plessinger is certainly one of the big hitters in the 2018 250SX West Region Championship fight, pointing that reality out last Saturday night on the base paths of Angel Stadium when he ran to a strong—and strong-closing—runner-up finish in what was an eventful 18-lap main event. His tenth career podium finish in supercross, the Monster Energy/Yamalube/Star Racing Yamaha is off to a strong, encouraging start in ’18, and he’ll look to back up his A1 result up this Saturday at NRG Stadium in Houston, Texas.

A personable racer who resonates well with the fans, Ohio’s Plessinger took a break from packing up his gear bag today to give Racer X a read on the one race that he’s run, as well as the one he’s about to run. Check it out.

Racer X: Aaron, how are you doing this Wednesday?
Aaron Plessinger: I’m doing pretty good. I just went to LA Fitness to swim in the pool and to do some indoor gym stuff. I kind of like the swimming a little bit. It’s all right.

I had a really good trackside vantage point for the 250SX West Region main event last Saturday night and watched you race your way into second place. You looked fast, strong, and confident all 18 laps. Were you happy with your performance?
Yeah, definitely. I was probably about fifth going into the first corner and then started making moves. I was able to triple into a corner and moved into fourth. From there I pushed forward and passed Alex Martin, and then I set my sites on Christian Craig. After I got by him, me and Adam [Cianciarulo] had out little cat and mouse game, and then he kind of dropped off a little bit. I felt really good. I felt really, really good about that race and I couldn’t have asked for more, except for a better start. I think if I would have got a better start, something might have happened with me and Shane [McElrath]. That might come this weekend.

Adam Cianciarulo pushed you hard the entire way, but you seemed to clear off from him a bit at around the 14-lap mark. Furthermore, you appeared to grind down McElrath’s lead a bit in the twilight stage of the race. Thoughts?
Yeah, I was definitely keeping an eye on both of them. And, yeah, like you said, Adam was really pushing hard trying to get me, but I kept my composure and just kept a level head and tried not to freak out about anything. I just tried to keep my lines going right and keep smooth, and that’s what I did. I was watching Shane and I would catch him one lap, and then he would pull away for one lap. Overall, I think I was catching him a little bit by little bit. That puts a lot of confidence in my corner just because not a lot of people can wear down Adam Cianciarulo and start catching the leader of the race like that. That put a lot of confidence in my corner, and I know where I stand now and I know what I can do. With a better start, I’ll be up there battling for the win.

A host of 250 guys told me on Saturday that the track wasn’t all that difficult, and there weren’t really any sections or obstacles built into it to separate you guys. Is that how you saw the circuit?
Yeah, definitely. It was more of a wide-open track, if you can feel me on that. It was more of an outdoor-style supercross track and you had to push really hard, and I think that’s where most people kind of messed up. You had to keep your breathing on point and you had to keep your heart rate leveled out. I think most riders went wide open and then their heat rate spiked, and they were kind of done for the rest of the main. I just tried to breathe and push forward. It was definitely a weird track, but you know A1 is always a little off compared to the other tracks. It was definitely a wide-open kind of race, and you had to push 100 percent the whole time and charge forward.

Did you and McElrath get to talk afterward at all?
[Laughs] I didn’t actually say anything to him, but he said after the race on the podium that he was just watching me every lap. He was like, “Man, you’re not catching me. Not this time!” Yeah, I saw a few little mistakes by him out there and I think if I can keep this up, I might be able to rattle him a little bit and steal that red plate away.

How was the team with you afterward? Everyone stoked on your performance?
Yeah, they were definitely pumped. They were really happy with the way I rode and the way I kept consistent throughout the night. I didn’t get to see everybody because I was busy running around trying to load stuff up and get ready for the press conference. Everybody that I saw down at the podium and at the truck, they were all pretty stoked on how I did.

Did any of the racers throughout the day or during the night program really impress you or not impress you? It was certainly a mixed bag of results on Saturday.
I thought Christian Craig was going to be a little better. I mean, he definitely rode good, but I thought he was going to be a little harder to pass and get by and pull away. But he still rode good and I think he ended up fifth. Everybody rode pretty solid, especially Shane. He’s been pretty good at the first round the past few years. Yeah, everybody rode good and I think it was just a pretty good race track that we were on, and nobody was really faster than anyone else to make a big difference. The way we started was the way we finished, pretty much.

Houston will run Saturday at NRG Stadium. Have you raced there before?
I actually did. I actually raced there in 2015 (Plessinger placed fourth). It’s pretty cool over there; I kind of like it over there. The last time I was there, I think it was a little bit more of a sandier-based dirt. That could play a little bit into the track deteriorating. I’m going to do press day on Friday, so I’ll know what the dirt is then and maybe have a little edge on these guys.

They Yamaha YZ250Fs looked and sounded fast on Saturday night. Are you pumped on your race bike?
We’re all pumped on the bikes over at Star. I don’t think they can get any faster than they are. I was pumped, and the team is pumped. The bikes are so fast this year, it’s unreal. Brad [Hoffman] and Jeremy [Coker] over there work so hard to come up with a fast bike, and they’ve done it. They’ve put in the work and figured out how that bike can go as fast as it possibly can. For a guy like me, I really appreciate that because [I’m] 6’1” and 160 lbs. racing against all these little guys. We’re all pumped with the bikes and the suspension is working amazingly well. We’ve got everything dialed in, and it’s a great atmosphere over there right now.

Do you think your height and weight hinder you at all on the 250cc motorcycle?
I think it definitely does on the starts. That’s the biggest thing. In supercross, I don’t think it’s too, too much of a disadvantage because I can counteract in the whoops a lot, but outdoors, it kind of hinders me a little bit just trying to ride the bike so hard. Once I get the start in the outdoors, it’s not so bad. Yeah, it’s not too bad in supercross.

You can’t really underestimate a real strong result coming out of the opening round of the series, can you? I mean, coming out of Anaheim 1 with a real strong result has to help, doesn’t it?
Oh, definitely. Your confidence shoots high every time. Every time you do good, your confidence is a little bit higher. I think everyone has nerves at that first race, but the season is starting, you know? The season has already started and that good finish could mean that one point you could lose a championship by. You have to go for it every round. You just have to plug away and do your best in the first round just like you’re going to do your best at the rest of the rounds.

And you’re going to be a dad, huh?
Oh yeah. I’m having a baby with my girlfriend in July. I think the due date is July 30. Come then, I’m going to be a dad. It was a surprise, for sure, but I’m really happy about it. I was a little nervous at first, but that’ll come with having a baby. I’m real excited now and I honestly can’t wait for it, and I think it’s a good thing just to have something to push forward for and keep my head on straight and know what I’m fighting for when I hit that spot where I’m tired and I don’t want to push anymore. Now I have to think, “Wow, I’ve really got to do this now!"