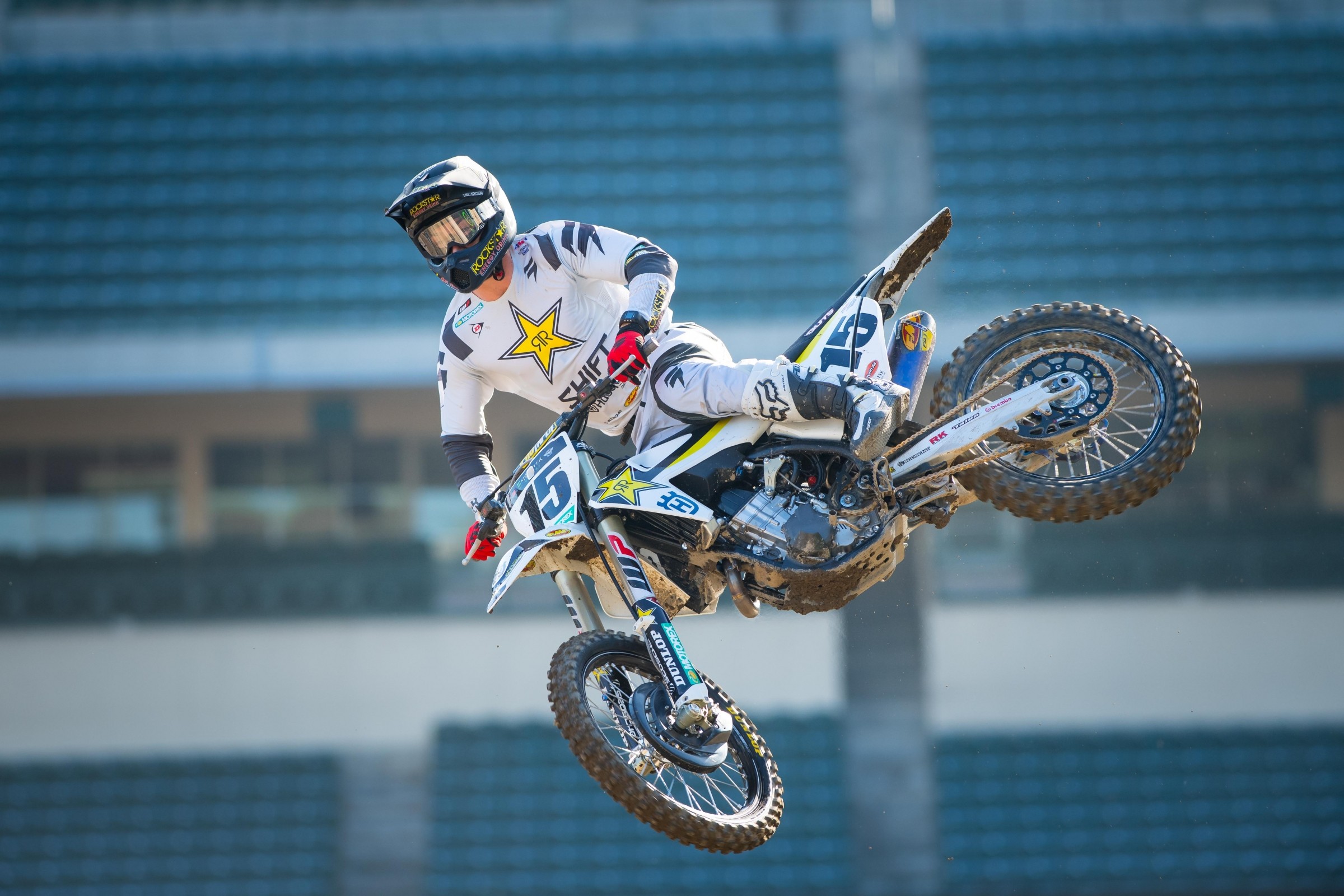 Comment: Bloss had a brutal crash at A1, in which he bruised his lungs and sustained a hairline fracture to his sternum. The team says they expect recovery time to be quick and to look for un update on his condition on Friday.

After @bbloss60 had a get off in the Anahiem 1 LCQ, he is already back home on the couch resting up. Aside from being pretty banged up and sore, he suffered two bruised lungs and a hairline fracture to his Sternum. Though the prognosis sounds rough, recovery time should be quick and the team will issue an update on Benny's progress this coming Friday. Thank you very much to all our fans, friends and family for all of your questions, concerns and support for Benny. It means a great deal to all of us here @teamrmatvmc ! @rmatvmc @ktmusa @flyracingusa #babygiraffe #SUPERCROSS #TeamRMATVMC

Comment: Bogle sustained a concussion at the 2017 Monster Energy Cup, then crashed again later during testing. He’s been off the bike and still isn’t quite ready to return. In the meantime, Malcolm Stewart will fill in for him.

Comment: Millsaps underwent surgery after fracturing his left elbow and suffering a concussion during practice before the Monster Energy Cup. He’s scheduled to miss the first six rounds of Monster Energy Supercross.

Comment: Noren crashed before the start of the season, breaking his collarbone in the process. He got it plated, but will miss Houston. He hopes to be back for either Phoenix or A2.

Three straight posts lol. To update better, I’m just on outdoors for now until I heal and strengthen up more from the collarbone surgery. I will be back for A2 or Phoenix Supercross racing 450??

Comment: Tomac crashed while leading the main event at A1 and sustained a serious shoulder contusion (bruise). He tried to gut out the remainder of the race but ended up exiting early. It’s likely he’ll race Houston, but we’ve yet to receive official word.

[Update: Tomac will race this weekend.]

Comment: Weimer had a bad crash while practicing during the off-season, which resulted in a fractured right wrist, broken left scapula, broken left elbow, bruised ribs, a bruised right lung, and a collapsed left lung. He’s hoping to be ready to go for A2.

Comment: Wilson went over the bars and slammed into the face of a jump during his heat at A1, incurring a shoulder contusion, strained rotator cuff, bone bruising, and a sprained wrist. Fortunately, nothing is torn. In an Instagram post earlier this week, Wilson said he still can’t lift his arm, and that it’s unlikely he’ll be racing in Houston.

[Update: Wilson is out for Houston.]

Comment: GEICO Honda's Christian Craig said on Instagram today that he sustained a sprained ankle in a practice crash yesterday, but will race in Houston.

"Houston, we have a problem. Landed on my ankle weird yesterday, didn’t even crash but ended up with a sprain. Lucky it’s not worse. Don’t worry- we are still going racing just might have a pimp limp. Could try to hide it from you guys but nahhh. Thanks to @teamdrg for all the help!"

Comment: Forkner cased a rhythm in November and crashed, which resulted in a broken wrist and collarbone. He’s expected to be ready for the start of the 250SX East Region.

Comment: Martin went over a berm in the main at A1 and hurt his shoulder. Initially it was thought he’d incurred a broken collarbone, but it was later determined the initial X-ray had detected an old break. Martin is expected to make a decision later today (Thursday) on whether or not he’ll be racing Houston this weekend.

[Update: Martin is out for this weekend.]