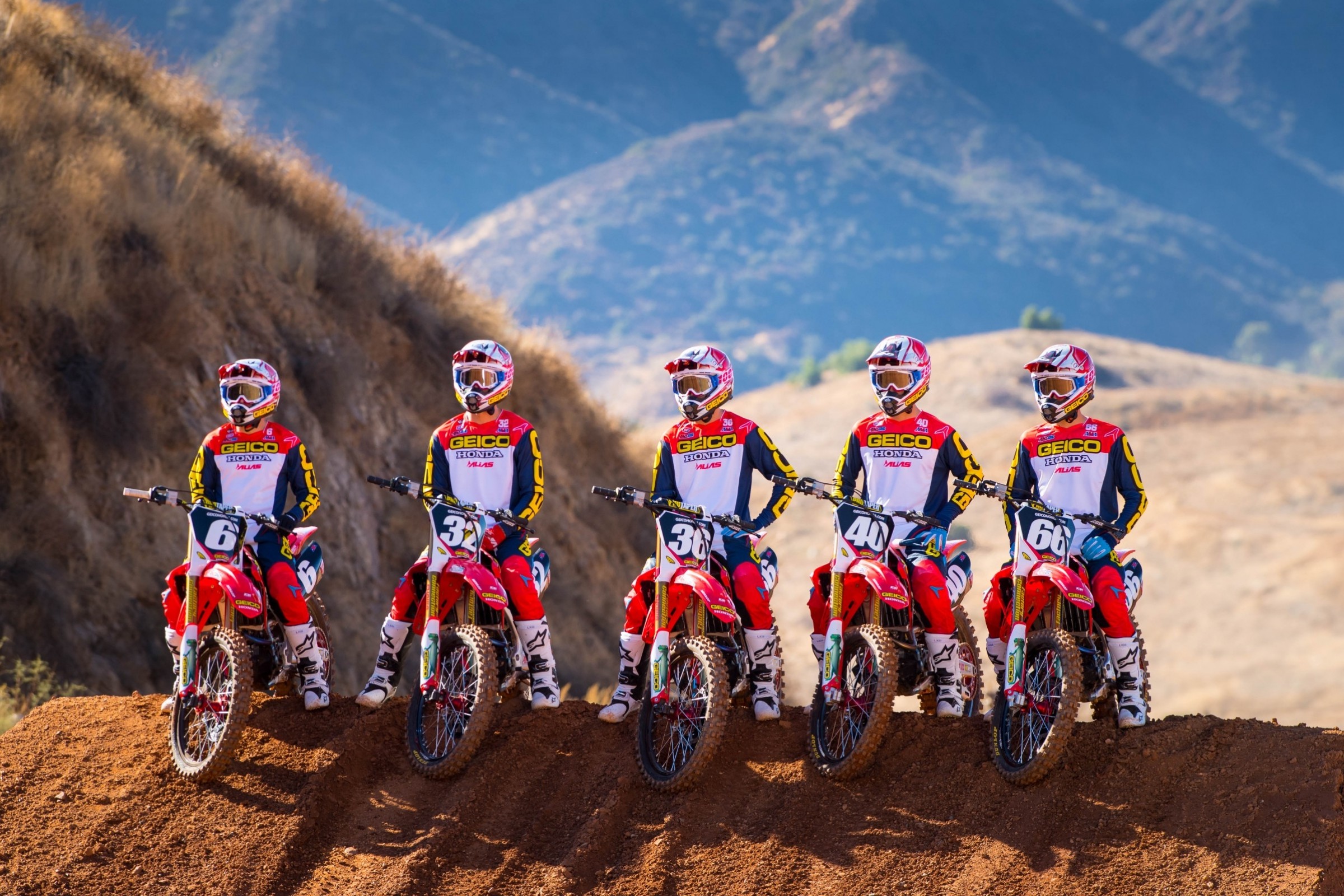 Note: Savatgy was one of the riders saved by the new 250 pointing out rule the AMA adopted earlier this year. Instead of being forced to move to the 450 class, Savatgy is back with Monster Energy/Pro Circuit Kawasaki, a team he’s been with since 2015. The last two years, Savatgy has lost out on the title in heartbreaking fashion. Will this be his year? We’ll find out on the East Coast.

Note: The 250 class veteran is back for a second go-round with Pro Circuit. Davalos raced for the team from 2013-’14 and nearly won a title. He’s expected to race the West Region next year.

Note: Forkner sustained a wrist injury this off-season, which will force him to the East Region. As a rookie in 2017, he finished sixth in the 250SX West Region.

Note: AC signed a multi-year extension with the team this past summer. After missing two straight SX seasons due to injury, he finished runner-up in the 250SX East Region in 2017. He’s expected to race West Region in 2018.

Note: Martin agreed to an extension with the team in July that will see him stay with the team through 2019. Although he won’t be moving to the 450 class full-time in 2018, as the original plan indicated, Martin will race the first three rounds of 2018 in 450SX. He’ll transition to the 250 for the East Region.

Note: After a sub-par year on the East Region, Craig will return to the West Region, where he battled for the title in 2016.

Note: The 2014 AMA Horizon Award recipient returns for his fourth year with the team. He recently signed a two-year extension with the team. Hampshire dealt with injuries during the 2017 250SX East Region and finished 19th overall. He’s expected to ride the East Region.

Note: Next year will serve as Sexton’s rookie year in supercross. He missed all of 2017 after breaking his femur in practice in Atlanta. Look for him on the West Region with Craig.

Note: The Iowa native began his rookie year with Smartop/MotoConcepts, but was released from his contract so he could join GEICO Honda on a two-year deal. Next year will be his first full season in supercross with the team.

Note: In his first year with the team in 2017, Martin missed most of the East Region due to injury. In five rounds raced, he secured two top five finishes, including a career-high second in Atlanta. Its expected he’ll race West Region in 2018.

Note: McElrath won three races on the West Coast last year and was in the fight for the points lead before his bike broke in Arlington. He finished a distant second to eventual champion Justin Hill, but it was closer than the points indicate. He’s back in the West Region in 2018.

Notes: Cantrell made his pro debut with the team in Lucas Oil Pro Motocross. He had an up-and-down year, finishing 14th in points. The East Region opener in Arlington will mark his supercross debut.

Note: Smith was thisclose to winning the East Region in 2017 before crashing out of the season finale in Las Vegas. He’s back on the East Region and hoping to lock down his first career title.

Note: Alix scored a fill-in ride for the team in 2017 after Benny Bloss went down with injury. He’s got a full-time ride this year and will race the West Region.

Note: The former Yamalube/Star Racing Yamaha rider was signed to an SX-only deal for 2018 after spending 2017 as a privateer. He’ll race the East Region next year.

Note: The defending East Region champion will move to the 450 Class for Lucas Oil Pro Motocross, but not before defending his supercross championship.

Note: Mosiman made his debut for the team in Lucas Oil Pro Motocross, but missed much of the season due to a shoulder injury. He’ll debut in supercross on the East Coast alongside Osborne.

Note: The defending 250SX West Region Champion signed a two-year deal with AutoTrader.com/Yoshimura Suzuki (JGR) this off-season, which will see him move to the 450 in 2019. He will defend his title out west.

Note: Jimmy D landed a spot on the expanded JGR team after spending the last two years with GEICO Honda.

Note: After missing much of last year with a dislocated ankle, shattered heel, and fractured lower fibula, Filthy Phil is back to contest the West Region. He’s currently on a SX-only deal.

Note: After bouncing around smaller teams in the U.S. and racing in Australia, the former Yamalube/Star Racing Yamaha ride lands a SX-only deal with JGR. He will be paired with Decotis on the East Region.

Note: Despite some rumors that Plessinger would jump to the 450 class, the former Rookie of the Year is back with the only team he’s ridden for in his pro career. Looks like AP will race the West Region.

Note: The former Grand Prix race-winner is back for a second year with the team. Currently recovering from a wrist injury sustained at the end of Lucas Oil Pro Motocross, Ferrandis will race the East Region for a second-straight year.

Note: Nichols is heading into his second year with the team. He recently sustained a broken upper arm in a practice crash which will force him to the East Region.

Note: Oldenburg makes the jump from Troy Lee Designs/Red Bull KTM. Despite a broken collarbone limiting him to just four races in supercross in 2017, Oldenburg collected two podiums, and finished in the top five at every round. He’ll race the West Region again.

Note: The 2017 Nicky Hayden AMA Horizon Award winner made his debut with the team at Unadilla earlier this year and rode to an improbable second place moto finish. Most expect for the New Yorker to make his supercross debut in the East Region.

Note: The New Jersey native is back for a second year with the team and will race the East Region.

Note: Pennington raced the final three rounds of Lucas Oil Pro Motocross with the team after finishing his amateur career at Loretta Lynn’s. He sustained a broken scaphoid (non-displaced) in a recent practice crash at Georgia Practice Facility, but the team hopes he’ll be ready for the East Region.

Note: Taft missed most of his rookie supercross year due to a serious head injury. He is back with the team for a second year.

Note: The New Jersey native will make his pro debut with the team in 2018.

Note: Hoeft raced four rounds with the team last year, his rookie season in supercross. His best finish was a tenth in Seattle. He’s back for a second season in 2018.

Note: Castelo is back for a second year with the team.

Note: The veteran was the recipient of the $100,000 dollar sponsorship the team awarded after a series of tryouts.