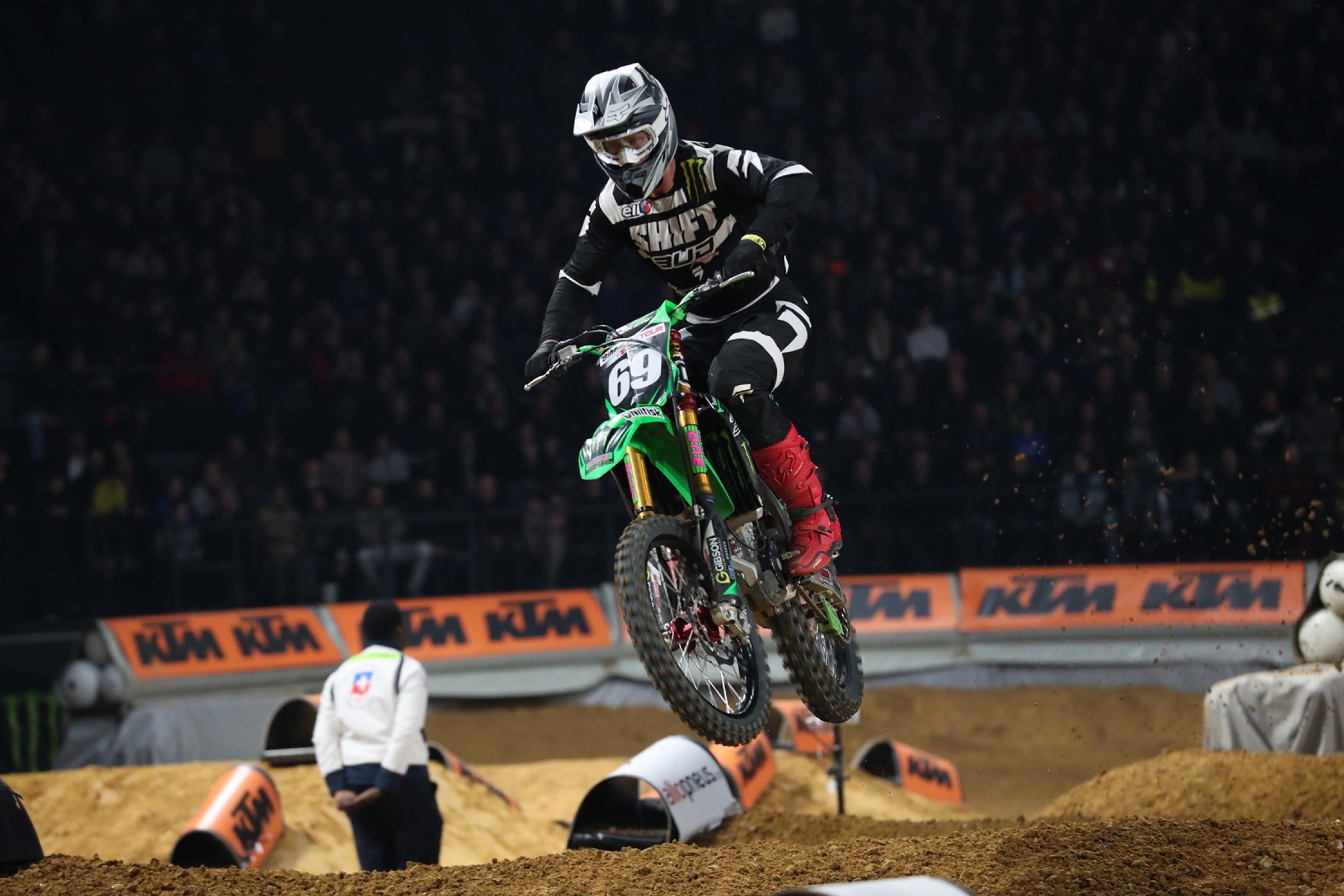 Over the weekend at the Paris Supercross in the new U Arena, Tyler Bowers won the second night of racing in the SX2 Class and finished third overall in the Prince of Paris standings after a fourth place finish the opening night.

A late edition to the lineup, Bowers missed press day due to travel issues and wasn’t able to ride his Bud Racing Kawasaki until racing on Saturday. Still, it was a productive weekend for the four-time Amsoil Arenacross champion.

Racer X’s Steve Matthes talked with him after the race on Sunday.

Racer X: Travel difficulties yesterday [Saturday]. It wasn’t your greatest, but nice job today [Sunday] taking the win. First of all, though, on the red flag lap, did you not see it? Then you parked [Thomas] Do and he was not happy. Did you not see that it was going to be red-flagged?
Tyler Bowers: I had no clue it was going to be red-flagged, but, like, a turn before the red flag, I parked Tommy.

He was not pumped.
He hit me first over there. When we talked he was like, “I’m in the championship!” I said, “That’s cool. If you want to win, just don’t mess with me and then we’re cool.” He said, “Okay, okay, we’re cool. No problems after this.” I said, “If you want to win tonight, go for it if you’re faster, but just don’t come near me.” So, in the main, he was leading and I was kind of just like, okay, I’m going to get second.

You were lucky on that red flag. Your start wasn’t where it needed to be. Great job on the second start.
Yeah, absolutely. We made some changes with the bike. That was kind of the hard part about yesterday. I got here and I’d never ridden the bike before. I was supposed to be here for press day and kind of shake the thing down. I haven’t been on the 250 for a year, and I haven’t been on the new style Kawasaki for longer than that. The Ohlins suspension I’ve never ran. I’ve never worked with the team. And then there’s the language barrier, too, with the team and me. They speak some English, but it was definitely hard. So, all day yesterday was basically just trying to get the bike right, trying to get the bike right. I’m a big guy and a lot of teams aren’t used to a big guy like me on their bike, so trying to get the suspension right was pretty hard. We got it figured out today. The main event tonight, we changed some clutch springs. I guess they run a little bit lighter clutch springs because all their guys are tiny. We changed some clutch springs and the thing grabbed like crazy on the first lap, almost looped out. When they did the restart, it was definitely way better for me. I came out, I think, third on the restart. Just tried to ride a smart race from there.

Do took off a little bit. You caught him, not shockingly. Good speed in the whoops. I guess you were seeing that you were catching him.
Yeah, absolutely. That was the big thing. We changed those clutch springs and it helped out a lot in the whoops. Before, I was just spinning on each whoop. So, we changed the clutch springs and I finally could hit the whoops like I know how to hit whoops. I caught up to Do a little bit. He made some mistakes and I caught him. I wasn’t really planning on passing him, and then he made another mistake and I was able to get by him in the whoops. It was pretty easy from there.

Last night’s main event, again, you were tired a little bit. You probably didn’t ride as well as you wanted to, but you did provide a highlight with the one guy who was looking around trying to slow-play you, slow-block you. It’s a bad idea.
I have nothing to say. Don’t do it with me. If you don’t start anything, I’m not going to do anything, but if you start it, I’m going to finish it. Especially last night in the main event, I was not feeling good. I was feeling horrible. I was just kind of trying to survive, and then somebody’s messing with me. I’m like, no, just go away. Please, just go away. It wasn’t very smart of him. I think he was actually a little bit faster, so if he would have just put his head on straight and just rode, he would have beaten me.

Overall, even with travel difficulties, you had fun? You enjoyed it?
Yeah, absolutely. The event here with [Eric] Peronnard and everybody here putting on the event, it’s always good. It’s always great working with them. Everything that they’ve ever done that I’ve raced has been great. So yeah, I had a good time here. The travel difficulties are just part of it. It adds a little adventure to it. Working with the team, Bud Racing, was just amazing. Like I said, we got here and we just tried to work on the bike, work on the bike. Every time I told them to change something, they didn’t complain. They didn’t tell me no. They went ahead and changed it, and we finally got it working for us.