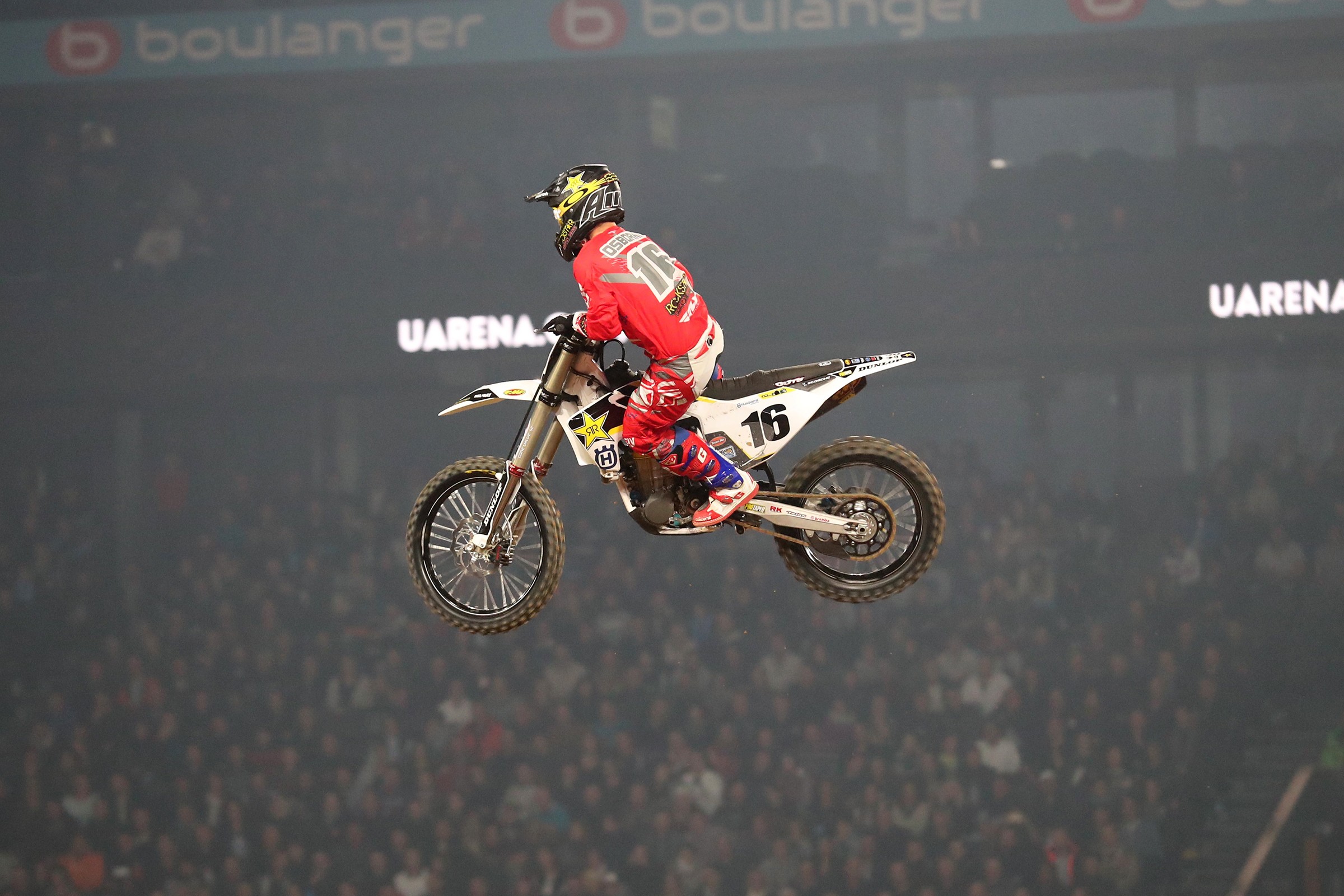 Racer X: Hey, today [Sunday], really bad starts. You had your work cut out for you.
Zach Osborne: Tonight, in the first main, I got a really good start; almost pulled the holeshot. In the second two, maybe I was trying to time the gate too perfect, and it was just bad. In the last one, I almost went down going down the straightaway and I was literally last. Just kind of battled my way to fourth. It was a big disappointment because I felt like my race craft was good, maybe better than my one-lap speed. But yeah, for only riding the bike a couple of times and just coming here to enjoy myself and do some racing, it was a good weekend.

The Superpole results determined your gate pick. How hard were you trying to get top two or whatever?
Trying hard, but that’s where I think I need more time on that bike [450] to learn how to push that edge. I feel like I could have waxed my time on my 250, had I been on it, compared to what I did on a 450. It’s just hours—hours and hours and hours on the bike, to get that supreme feeling with the bike. It takes a long time. So, I’m not disappointed at all. I’m leaving healthy, and no major kinks in the weekend. I feel like I showed some decent speed and fitness and stuff.

You got some good practice in passing. There was not much room and a lot of guys in front of you.
Yeah, in that last one I was like, “Dangit! Now I have to work through these guys.” I started working through and a couple of them were pretty hard on me. I was like, “Man, come on, it’s the last race of the weekend, guys, let’s just take it in.” But it is what it is. I can’t be too disappointed; it was my own fault. I got a terrible start.

You haven’t been here a number of years; you raced it back in the day. I think the track provided good racing.
Yeah, I think when the whoops are bigger and the track is more mellow, I think it makes for better racing because everyone is closer. I think you see the same thing in the States. We should learn from that, really, I feel like. The dirt was really good for a European Supercross. It was pretty tacky, not all rutty and gooey. It was pretty realistic for what we have at home. So I’m really happy that I got to come. It was a pretty positive weekend. There’s a lot of things I can improve on and also a lot of things I can take away and say, “You know, that was pretty good.”

Like maybe stay away from the inside of the whoops like I told you.
Yeah, I already told you, but you, being the narcissist you are, is that the right word? Adam [Wheeler, On Track Off Road] would know…

You just couldn’t sweep the turn and I didn’t like it.
Yeah, but it was just a comfort thing. If I had a couple hundred hours on the bike, I would expect to go down the left side, too. But when I’m not as comfortable, I’m going to play it safe.

What do you think Marvin was doing out there to basically shine through all week?
He was really good just kind of situationally sorting out the track quicker than everyone else, or, at least to me, that was the biggest difference. I wanted to kind of find the track every time where he was just on point as soon as we hit it. I think that was the biggest difference. He’s really good at these tight little things where he can take some sneaky little French lines. Yeah, that was kind of expected. He was motivated coming here, and I knew that.

Racer X: Crashed in the whoops in practice, we weren’t even sure you were going to race. You skipped the first night, all things considered then, that last race, fifth place, salvages what could have been a shitty weekend?
Jeremy Martin: Yeah, I was pumped. Obviously, it was, what, an 11-hour flight? I didn’t come here just to hang out and watch; I wanted to race. I think riding with Eli [Tomac, in Colorado] has been really beneficial for me, but you can’t mimic this. This is race conditions, and you’re getting a feel for it breaking down. The whoops weren’t massive, but they were cupped. I resorted to jumping, that was my go-to. So, I’m just pumped the wrist was good enough to ride today.

It bug you a bit?
Yeah, it was hurting. I had to wait on some stuff and be patient due to my wrist.

These guys had a whole day on you on the track.
Yeah, for sure. Those guys got to race and be in race intensity and get the track figured out, and I was at the hospital getting X-rays. All in all, it was a great weekend and I’m pumped with the fifth.

Whoops looked tough. Nice quad a big triple and the dragon’s back; looked like a good fun flowy track.
It was good. This was my first supercross overseas. I don’t think I had many French fans. They love Marv and he was killing it. No hard feelings. Just to hang out with everyone, it’s unique. In the U.S. everyone sticks to their own little groups, and I think here, everyone was kind of mingling together and it was a good time.

Racer X: Maybe not the weekend you wanted. You came from Australia, you had a bit of a weirdo suspension setup, but you got some track time, and there’s no practicing like racing.
RJ Hampshire: Yeah, exactly. That’s what happened last night, too. [Cole] Seely and I crashed in the first turn and then we hit again and it took my whole front end. I came in and straightened it out, and I said, “It really can’t get any better than this, race-like.” We just kind of finished it off. These bikes, there really wasn’t much I could do. It was just good to get the experience.

Your starts were bad all weekend.
I honestly don’t think I wanted to get up there. [Laughs]

Okay, so I guess they were okay then.
Sometimes I was fast through the whoops, and other times I was sketchy.

Back in the pack, a lot of weird stuff going on. Some really aggressive dudes.
Yeah, and I was just riding with them. It was cool. I got hit a couple of times, but it was fun, this whole experience these last two weeks. Never been overseas to race before. We got these calls last-minute, we didn’t have time to do anything to the bikes. We threw 250 suspension on and went with it.

You were supposed to ride a 250 but it didn’t work out. 250 suspension on the 450. How soft was it? Where you messing with clickers?
We were messing with clickers and we got to the point where clickers aren’t going to do anything here. So, we just ran it. Same thing in Australia. I haven’t been scared on a dirt bike in a while, and I was scared! Jeff [Majkrzak, GEICO Honda team owner] texted me before these last two races, saying “Just checking to make sure you’re safe.” I decided not to text him back; I didn’t want to jinx it. I hit him with a text when we were finally done. I want to have this opportunity again, then, and I think with a little time to go set it up, we could actually race and not just ride. You always want to go overseas to race, and I got hit with this opportunity. I told myself I was not doing it. Right after outdoors I said I was not doing it, so that was what kind of scared me, because I had already made up my mind that I wasn’t going to do it. But it was like, “Let’s go have some fun.” I need a little more time to get set up, or just give me a 250!