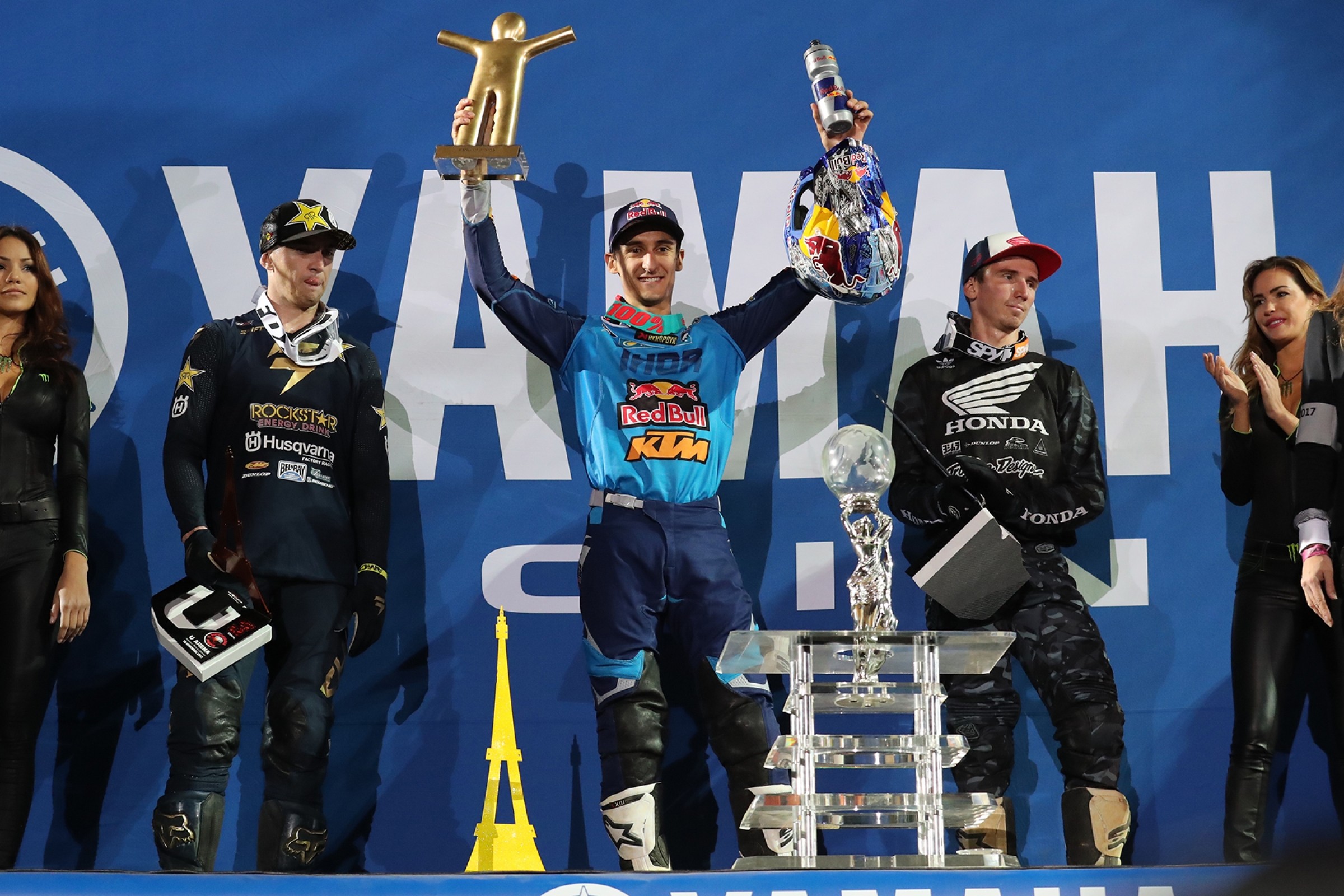 Marvin Musquin finally lost something during this 2017 off-season run. Dean Wilson and Cole Seely each beat him in one sprint race over the weekend in Paris. That’s it. Marvin won everything else over the weekend to score King of Paris honors, earning more trophies and cash to put alongside his perfect nights at the Monster Energy Cup and Red Bull Straight Rhythm. Steve Matthes talked to the Red Bull KTM rider after the race.

Racer X: Man, what a weekend for you, what an off-season. I was really impressed tonight. In the Sprint race where Cole caught and passed you, you were struggling a bit at that point, but you figured out where you were weak and picked it up. I feel like your race craft this week was great.
Marvin Musquin: Yeah, thank you. I feel like the race track was very tough. Those berms were definitely blown out, loose dirt, no ruts. That turn before the whoops, it was super open and wide, so I went inside and outside. I didn’t want to get passed here, so I went outside, so I had no speed going into the whoops and Cole was better than me and he got me in that Sprint race. He was better than me in that race.

But you picked it up. You learned some things for that last main event. He was behind you there and you pulled away.
Yeah, the starts were great and he was behind. I skimmed the whoops from the outside and was a little bit faster. I didn’t want to just send it and risk to crash, but no excuses. I was a little bit slower, but hey, I got better in the main and I started going inside again in the main and was consistent and safe.

Seemed like there were six or eight ways to do them [the whoops], and you tried all of them.
Yeah, exactly, but that’s good. Yesterday was only one line, outside, and before the dragon’s back we were able to go inside. We need to see that. We don’t want to see everyone using the same line, outside.

And your starts, they were on point. Was there anything different or special that you were doing?
No, I like the metal gate. The traction is super consistent and the bike was working great. The starts were really important this weekend.

You’ve raced this race before, but in Lille. Now we’re back in Paris. Talk a little about the differences.
Well, this race was in Paris for many, many, many years. For reasons, they went to a different city, but now we’re back and that’s where it should be, in Paris. We had a great weekend, brand-new stadium, and the fans were here, 24,000 people, and that’s really good for a stadium here in France. Great new stadium, so I’m very happy to be here.

I was talking to JMB [Jean Michel-Bayle, former supercross champion from France] about you a little bit. It’s different the position you’re in now. You’re the man here, pressure is on you, everyone wants you to win everything. You almost did, but did you feel that a little bit?
Yeah, for sure. I was disappointed when I got second. For sure, the crowd, they expect me to win, but this weekend the track made it super challenging and difficult, and those guys were sometimes better. I’m glad I got the Superpole both nights. That was a tough exercise, but we got it done.

What an off-season for you. Monster Cup, Straight Rhythm, and now this. Man, it’s pretty nice.
Yeah, it is, and it’s good for the confidence, but at the end I know this is not Anaheim. This weekend we had great riders—Seely, Osborne, Wilson—but I know Anaheim will be different. Last year was a good off-season too and it built confidence. I’m just looking forward to doing the same thing.

Little different engine design with the new bike, a little different frame. What do you like about it?
You know what? We’re still learning it. We’ve raced Monster Cup and Red Bull Straight Rhythm and now Paris, we’ve done some testing, but I think we’re going to do more. I think we’re not ready for Anaheim yet, we’re still working on the bike and that’s what we’re going to do until January. We’re still learning that new frame and all that.