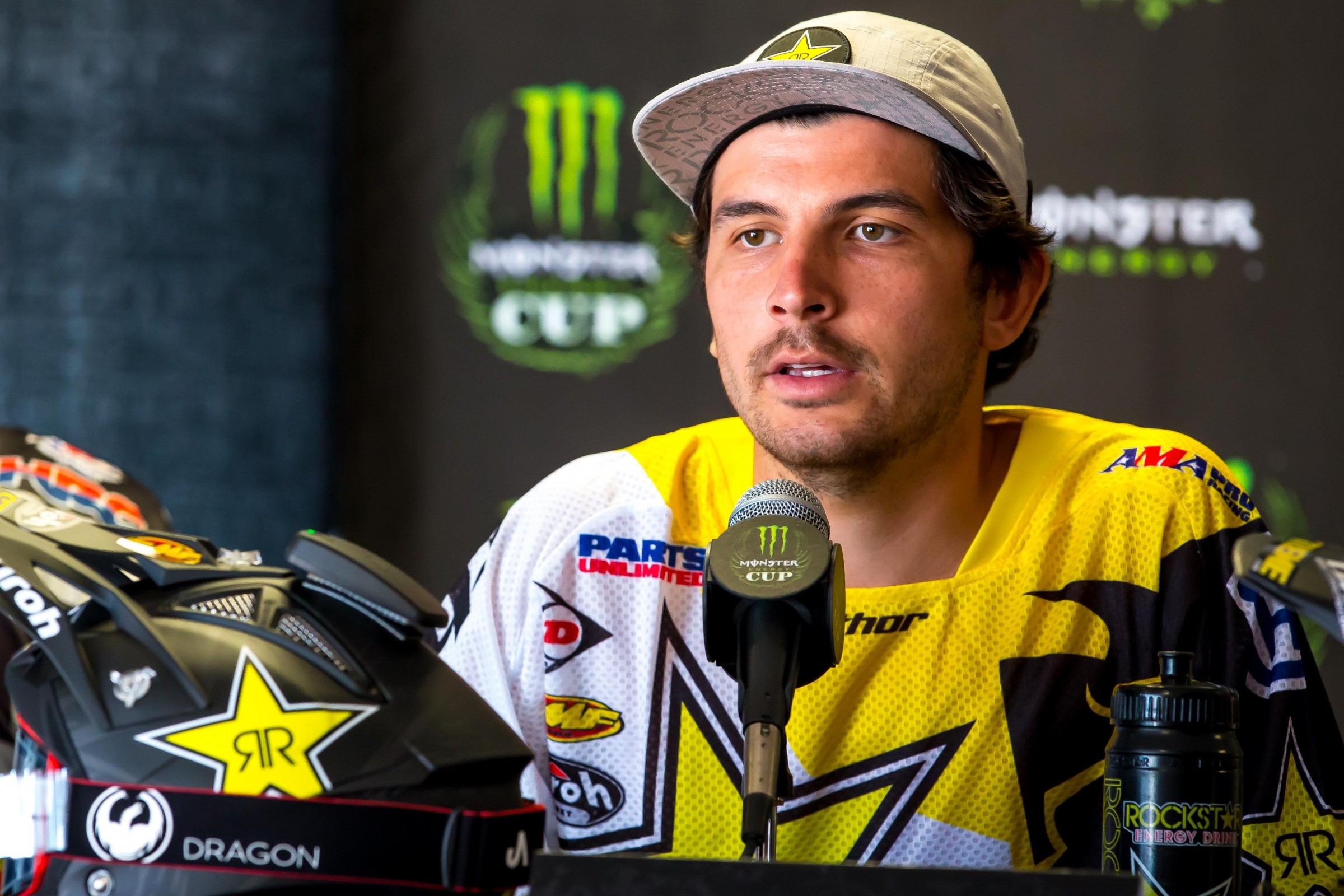 There’s never been a thrill of victory/agony of defeat moment quite like Jason Anderson’s moto triumph at last year’s Motocross of Nations. Despite riding with a broken foot suffered in his qualifying race, Anderson logged the race of his life and won the second moto of the day, the first ‘Nations moto he had ever competed in. Moments later, as he rolled the finish line jump with his fist in the air, a lapped rider landed on him. Hero to hurt, just like that. He was unable to line up for the final moto, and Team USA snatched defeat from the jaws of victory.

His escape from getting landed on was miraculous—he was only battered and bruised but not seriously injured. Another inch in a different direction, and it would have been much different. The foot injury from Saturday, though, ended up much worse than expected.

“It’s kind of a hard thing, because I feel like people talk bad on people who don’t race Motocross des Nations and stuff, but I’ve lived through a situation where things went south and it affected your next year, and it’s not that fun,” explained Anderson to us a few weeks ago. “It makes it hard for me to say bad things about anyone who turns it down, because I’ve lived through an injury that affects the next year.”

Anderson started the 2016 Monster Energy Supercross by winning the Anaheim 1 opener. He started the 2017 season with a fourth. He was good but not spectacular for most of the indoor season.

“I think last year I was dealing with a couple things,” he says. “I got hurt at des Nations and hurt my foot, and at the beginning of the season, it didn’t hurt a lot but it was just holding me back a little bit. It turns out the bone didn’t really heal, it was just the plate in there holding it together. As the year went on, we did some therapy and it finally healed. I don’t think it hindered my riding, I think it was actually just in my head a little bit. It was a pain in the butt to deal with, but we went through it. So that kind of slowed me down at the beginning, and as the series went on I started feeling better, then outdoors I was having my best season to date, that’s for sure.”

Anderson’s strong outdoor season, which saw him vying for 450MX overall wins in Lucas Oil Pro Motocross each week, ended early due to a slew of mid-season injuries. He’s seen the good and bad of racing during the off-season, but he’s diving back in this year. He returned to action at the Monster Energy Cup, where he finished second, and this weekend he will headline the AUS-X Open in Sydney, Australia. He’ll also battle his training partner and friend Marvin Musquin at the Geneva Supercross next month. He thinks the timing of these off-season international supercross races actually works well for him.

“These races work better [than des Nations] because they’re a little bit later,” Anderson says. “They kind of recharge the batteries. That break after outdoors, you really need that to be rejuvenated. If you don’t have that, it’s hard. I think these supercrosses, like Australia, they’re later, so you can still get that break.”

Anderson admits that his trainer Aldon Baker is “not the biggest fan of these races” but he thinks it might benefit him. “I’ve never really done a bunch of them and I want to explore it a little bit,” he says. “I don’t think it will hurt me this time as far as my training because I’ve done four years with him and I’ve built up a very good base. I feel like I’m not going to lose a bunch. I actually almost want to back it off a bit—I don’t want to be at my training peak in October anyway. I still have to do my training over there, but you still get a little bit of a break, too.”

Anderson says he’ll still have to follow strict training orders while Down Under, so he’ll be in the gym each morning. But this Australian weekend will be as much about fun as it is winning—and you can expect the rabid Australian fans will appreciate a free spirit like Anderson. He even plans on reconnecting with a few of his Aussie friends while there.

The off-season racing question will rage forever. There are risks and rewards. Spending a weekend overseas can be fun, but it also impedes on those rare weekends when you don’t actually have a race, which will be hard to come by once January rolls around. This year, Anderson will give the internationals a try. We’ll see how it works out this weekend, and also come Anaheim 1 in January.