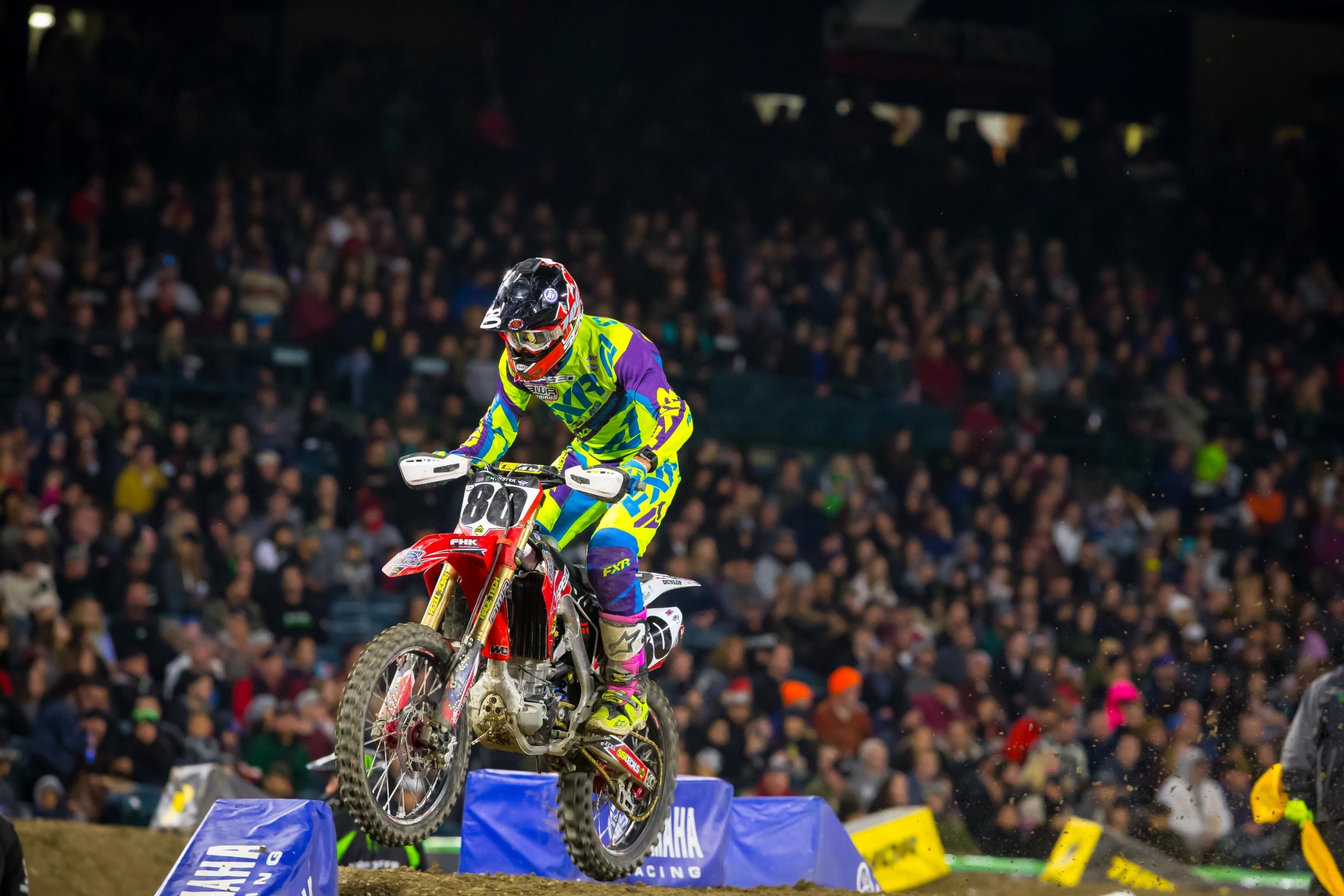 Remember Cade Clason? The privateer rider that tested positive for an amphetamine near the end of last year’s Monster Energy AMA Supercross? By the time the test results came out, Clason was contesting the Canadian Nationals, and was able to continue racing. But what about supercross in 2018? Well, there’s not much to report on his status and as of now, Cade’s not planning on racing anywhere in 2018 and cannot, even four months later, find out when he’s allowed to earn a living in the sport he’s been working in for nearly his entire life.

There’s no question that our sport needs drug testing; anyone who thinks otherwise is living in a distorted reality. There’s millions of dollars at stake for the top riders in a sport that’s incredibly hard and physically demanding. Having an advantage in strength or endurance or recovery (or all three) is huge and if we didn’t have someone watching our athletes, who knows what would be going on. Drug testing is a good thing, no doubt about it. Let’s get that straight.

But like a lot of things, we just can’t seem to get this right. Monster Energy Supercross is sanctioned by the FIM, which uses WADA (World Anti-Drug Administration) while the Lucas Oil Pro Motocross Championship is sanctioned by AMA Pro Racing and uses USADA (United States Anti-Drug Administration). USADA falls under the WADA umbrella and both are set up to test and monitor athletes. They also punish athletes in a matter built around the Olympics: a first offense can cost you four years, or one full Olympic cycle.

James Stewart was removed from racing for a year and a half after testing positive for Adderall (the same substance that Clason tested positive for) and to some that was the equivalent of killing a mosquito with a shotgun. Stewart’s exact situation of filling out a TUE (Therapeutic Use Exemption) is unclear, while Clason, it appears, did everything by the book—to a point. He was diagnosed with ADHD and prescribed Adderall, then tried to do the right thing and send his TUE to the Switzerland-based FIM.

“Basically when I started taking (Adderall) I got all the forms online for the TUE,” explains Clason.  “I took them to my doctor. The doctor filled them out, and I submitted them to the FIM. I just scanned and emailed it to them, which is how it said to do it. I got a notice back and it said it (the TUE) wasn’t correct and that I had to do it again. So I went back, had them do it again the way they said to, and I sent it back to them. Then I never heard anything from them.”

Here’s where the trouble happens. Unlike the first time, when WADA told Clason he had not filled the forms out correctly, Clason never heard back when he submitted the form the second time. So Clason figured everything was filled out correctly and went about racing the 2017 Monster Energy AMA Supercross season. Then he was chosen for a random drug test at the East Rutherford SX and Clason happily went in and took the test.

“It’s funny because I was kind of stressing because a few days before [the race] I had had a wisdom tooth pulled and then I was on some antibiotics because it got infected,” he explains. “I was like, We’re two races from the end of the year. I’m not submitting paperwork for this stuff. I don’t even think I need to… Then I got drug tested and literally on my way home from that race I drove straight to the dentist and I was like, ‘Can any of this stuff get me in trouble?’ He’s like, ‘No. An antibiotic is perfectly fine for any type of sport,’ and that’s all I was on, so I was like, ‘Okay, cool. It is what it is.”

Then around mid-July, Clason received a letter indicating he had been provisionally suspended. He went into full panic mode, sending emails and calling the FIM. He got no response. Two days later the press release went out and his life has not been the same since.

So what about that revised TUE Clason had sent in? Well, when he finally tracked someone down at the FIM, “They acknowledged that they have it, that it just was never processed correctly. The forms still weren’t right.”

Clason, a privateer, lacks the thousands of dollars needed to hire lawyers and appeal his case over in Switzerland. He’s been in limbo with very limited interaction with the sanctioning body that punished him. To add to his problems, in one of the communiqué’s the FIM mentioned that since Stewart’s penalty the rules have changed and Clason can be suspended for four years—an “Olympic” penalty. At 22 years old, his peak earning years may be over before they even begin. And all because no one communicated any problems with his revised paperwork nor did they tell him he had passed/failed the approval process.

“Right now we’re going back and getting stuff from a doctor when I was younger just to prove that I was taking it when I was younger,” says Clason. “They (the FIM) said that could help the fact to lower the suspension. It’s not a guarantee but it’s a possibility. So, we’re working on that and trying to figure that out. “

This sport is growing. The numbers of TV viewers are up and over and over I’m told by people in positions of importance that the sport is stealing some of the disengaged NASCAR fans as we try—a little too obviously, in my opinion—to grab some of that crowd. But, if we’re trying to be a little more NASCAR-like, why not follow the stock car association’s lead and do our own testing with appropriate penalties and not ones that are better suited for the four-year cycle that Olympic athletes face? Sure, we have a bit of an alphabet soup governing the sport right now, between two sanctioning bodies for supercross (AMA and FIM) and a third (AMA Pro Racing) for outdoors, but surely they could work together to maybe form a drug-testing and punishing regimen that makes more sense for motorsports’ athletes than it does track-and-field athletes. Because WADA and USADA seem to be inflexible and way too harsh for our athletes and sport. A runner or long-jumper or Tour de France cyclist taking PEDs is one thing—it’s true that in those sports, suspending someone for a few events, a few months of even a year may not be detrimental enough. For a dirt bike rider who races in a championship that pays points each week, it would be. Not to mention that we’re discussing an athlete with ADHD taking prescribed medication—not full-on steroids here.

Clason is trying to see the bright side. “Everybody in the U.S. has been so helpful and trying to guide me in the right direction, but as far as the guys overseas, that’s where the lack of communication comes in,” he says. “Obviously, nobody answers phone calls. They don’t return emails. It’s not like I send an email and in a day or two I get a response. I send an email and like a month later they finally get back to me.”

Think about how frustrating it must be for an athlete trying to be proactive in his career. For the record, Clason 100 percent believes that he should be punished for not following up and making sure his second submitted TUE was approved but right now. But now he’s facing a four-year suspension for something that his doctor prescribed, that WADA acknowledges he submitted two forms for, and has been exempted for more than a couple of his fellow racers. Pardon the pun, but it’s all a bitter pill to swallow.

Last week Clason underwent shoulder surgery to fix a lingering issue, while also facing the daunting question if he’s even allowed to race anywhere in 2018. He’s worked something out with his 2017 gear sponsor FXR to do some rider support and preparing to take some online business courses to better himself, but the rest if truly up in the air.

“FXR basically offered me a part-time job to go to a lot of the supercrosses, a couple of outdoors and a bunch of big amateur events basically to just help out the riders,” he says. “(They want me to) basically be like a rider support guy but with less to do. I’m cool with that. I think it will be really fun to get to go to the races and get to help out my friends and just get to be at the races.”

As for Cade Clason as an actual racer, the wait continues and his career hangs in the balance with some apparently hard-to-reach folks in Switzerland that don’t seem to be deeply concerned with letting one young American know exactly what he’s done wrong, what he can do to fix the problem, and when he can get back to racing his dirt bike for a living. Facing four years, Clason knows that this could be it for him.

“I’d love to just try and get it straightened out with them. If I get suspended, maybe that’s the way it is,” says Clason. “I’ve kind of accepted the fact that I’m going to get suspended. I understand that I messed up with the paperwork and stuff, but in no way do I think I deserve to be suspended for four years.”