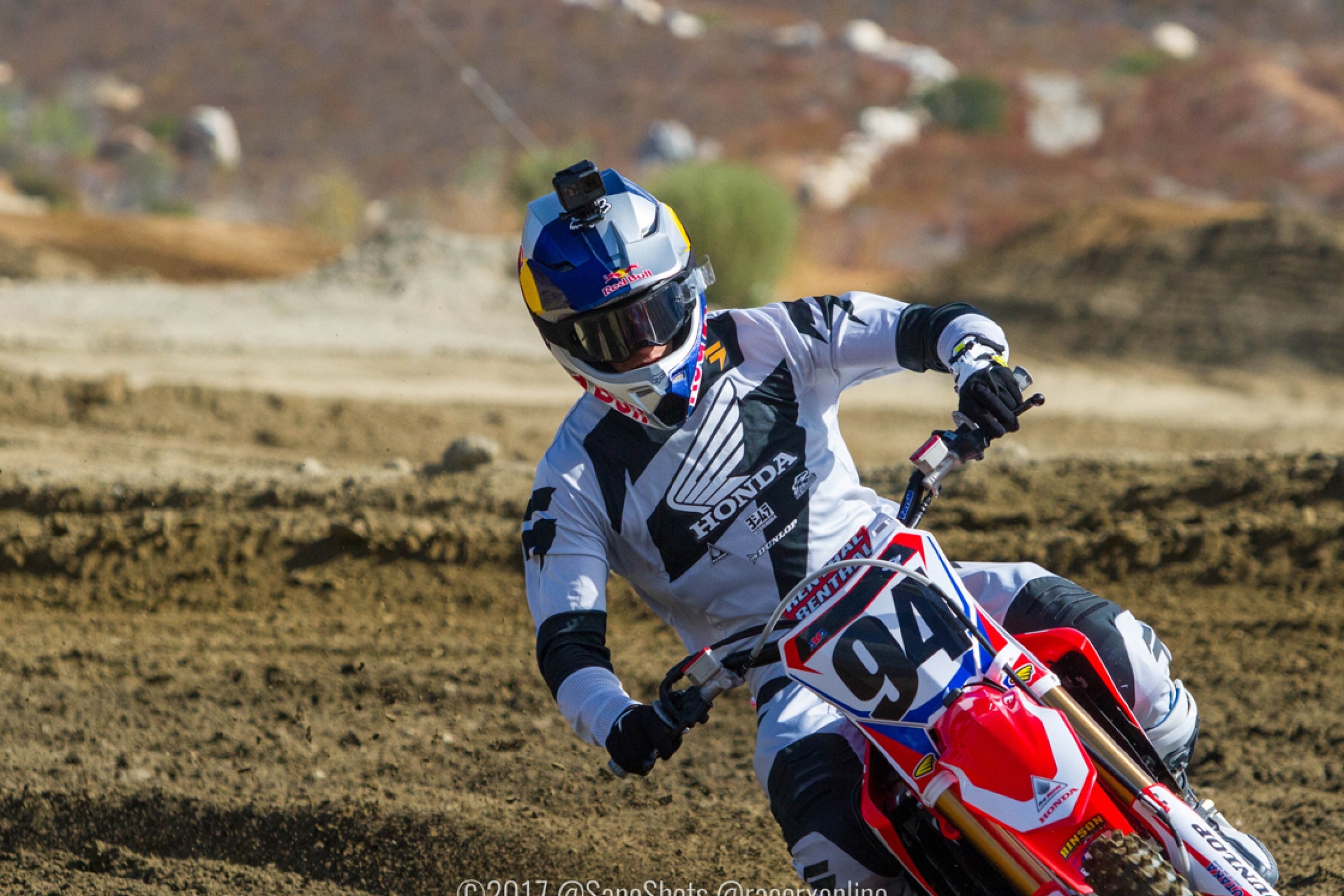 Honda HRC’s Ken Roczen told us recently that he’s on track to return to racing at the 2018 Monster Energy Supercross season opener at Anaheim. Sidelined since a career-threatening injury last January, Roczen has returned to riding in the last couple months.  We caught up with him recently for a Racer X Films segment on his return to riding. Below of the transcription of the interview conducted that day.

Racer X: It’s good to see you out riding today, Kenny. How are you feeling?
Ken Roczen: Overall I’m feeling really good, actually. Today is a little bit one of those days. I’ve had two days of riding this week. It’s the third day and it’s a constant rollercoaster up and down. Today’s a little bit of a downer. I’ve had two upper days though. This is just something that comes with the injury and coming back to the sport, really.

Just soreness from riding three days?
Honestly, it’s not even that I have soreness in my wrist or elbow. It’s more so that I have a baby hand going right now. I have no callouses on my hand. I have a way different grip because my wrist doesn’t really bend. My arm was constantly straight so it’s almost like my skin is slightly folding up and it gets super raw. I don’t get blisters, but underneath the little bit of callouses that I have it just gets super painful and raw. So, this is currently what I’m struggling with right now. But all in all, you got to take the bad with the good, the good with the bad—however you want to say it. I’m glad that I’m even out here riding in general.

How many days are you typically getting in per week right now?
This is the first time in a long time that I’m getting in three days of riding this week. Before I got kind of screwed over a little bit the hurricane that we had in Florida, so I had a week of not riding at all, which I can’t really deal with right now at all. I need seat time, bottom line. There were just little bits and pieces here and there that I couldn’t really ride, so it was twice a week. Then I had surgery not too long ago. I took a little bit to get going from that. So, it’s definitely not been easy, but I’m sitting on the bike. That’s really all that matters.

I saw you were riding while you still had stiches in your hand. You’re ready to go.
Yeah, I was. When you get the metal out, the doctor pretty much said that I could do whatever I want to pretty much the day afterwards. There was no way possible because I was again in massive pain. It was quite a big procedure again. I couldn’t really do anything for quite a while. It was at least two weeks. Overall I had stitches in there. It wasn’t really a big deal. He said as long as I cover it up really good and keep it clean I can do whatever I want.

How is the grip strength in your hand?
My grip strength is fine. I don’t think for riding dirt bikes you don’t really need a whole lot of grip strength, to be honest. So, that feels completely normal. I don’t have full range of motion in my elbow, but that doesn’t really bother me either. The biggest problem that I’m struggling with at the moment is mainly the wrist just because it is very stiff and I don’t have a whole lot of mobility in it, but it’s something I’m adjusting to right now.

It’s just kind of a range of motion thing?
Yeah, the extension. Pretty much when I’m standing instead of having the wrist bent like this, I can’t do that on my left so it’s constantly straight. That is a little bit weird. I got to take what I get and just deal with it, adjust it, whatever I have to do.

How is the adjusting to that? Is it just kind of getting used to it?
Yeah. Like I said, I need time on the bike to get better and better. I actually feel pretty good. I’ve done a couple of days of testing this week with the team. That went very well. Overall, in the end I know it seems like I’ve been riding for a while now, but I haven’t really put that many hours on the bike. The first bit of riding that I did when I started, you couldn’t even really call it riding. It was bits and pieces here and there just because I was so sore.

When do you plan on hopping on a supercross track?
Hopping on a supercross will probably be around mid-October. That’s what we’re planning on right now. I probably could right now, but I need more finesse. It’s hard for me a little bit to judge some of the jumps, so that’s just something after being off for six, seven, eight months, whatever it was, that’s the only thing that I have to get used to a little bit.

I think you said before this injury, you’d never been off the bike more than six weeks before, right?
Yeah, six to eight weeks or so. So, this was definitely one of the bigger breaks that I’ve had in my life, that’s for sure.

Overall how are you feeling with everything? Are you happy with where you’re at right now?
Yeah. I’m a perfectionist and I want to be right now where I left off, which obviously is really hard. So, when I have a day like today I get a little down on myself, mainly because I expect myself to get better, but at the same time nobody would ever thought that I would be back by now. So, again I got to be glad that I’m able to do what I’m doing right now. This is just something I have to remind myself every once in a while.

This might be hard to gauge, but how would you say percentage-wise you are to where you were before?
I’m far away from being 100 percent, as in being strong, having my speed, being consistent, so that’s something that I’m just working on. Percentage-wise it’s really hard to say. Every day I kind of don’t know what to expect when I go to the track, if that makes sense. I’m still dealing with soreness here and there. The shoulder is hurting because my arm was hanging dead for months and months at a time. So, there’s a lot of muscles that are not there that stabilized certain things. Every day is a new adventure.

Do you feel like your shoulder is a little overcompensating for the other muscles?
Yeah, exactly. Some muscles on the back part of my shoulder, they’re not really firing so I overuse other ones. Honestly, the actual injury that I had, that’s not even giving me the biggest problem right now.

What would you say the biggest problem is?
Just my shoulder, hands … no callouses. Wrist is sore but the elbow doesn’t bother me at all.

Still on track for A1?
Yes, on track for A1 for sure. We have some time, but I have absolutely no time to waste, so I got to make it count every time I go to the track.