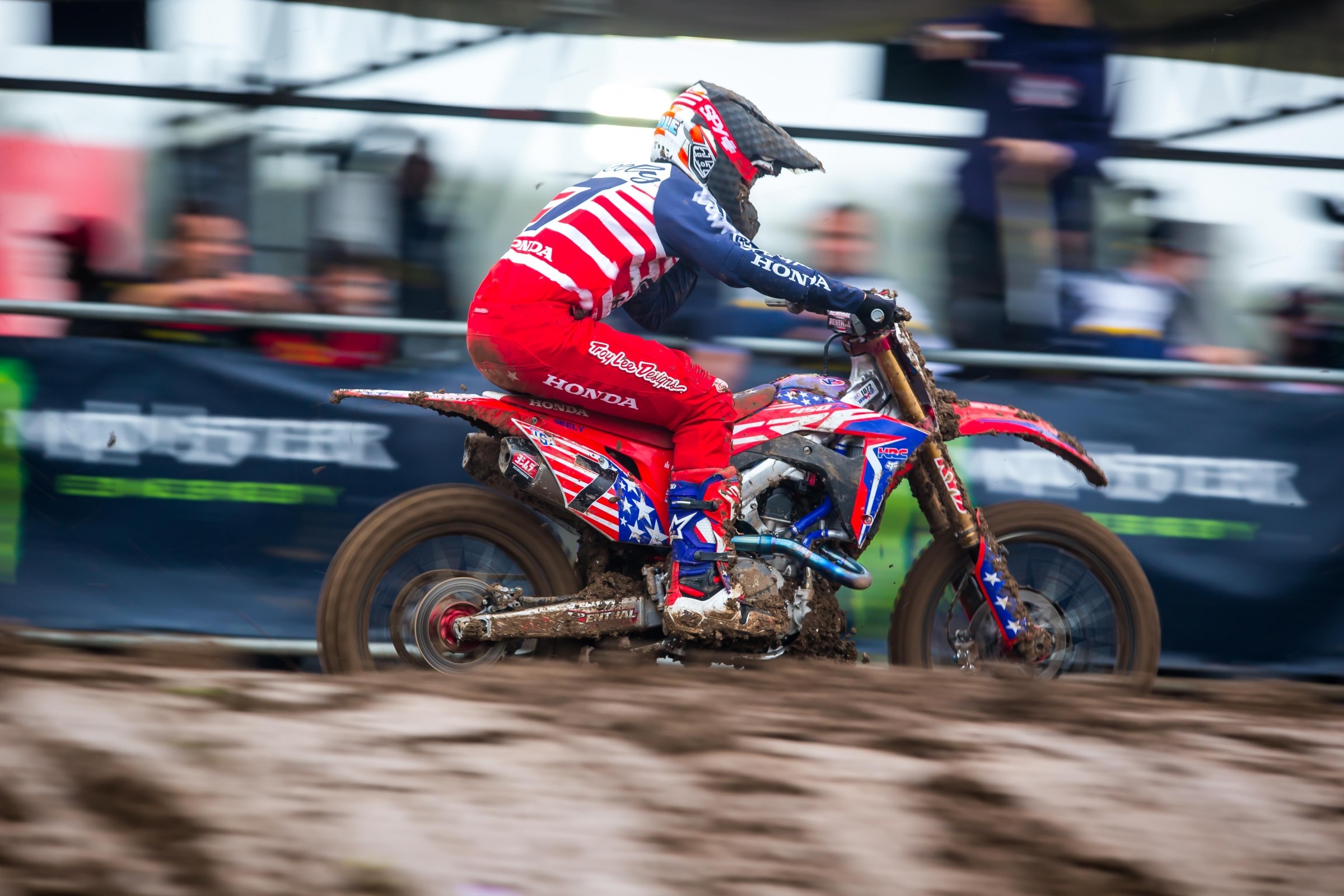 While Team USA didn’t look to be in line to win the Motocross of Nations on Sunday anyway, there were no doubt some hurt feelings and tense moments over at the Honda HRC camp on Sunday, since Cole Seely’s factory CRF450R broke in the exact same way in both motos. The double DNFs not only made it impossible for the Americans to contend for a podium, it also led to a final finish of ninth place, which is about as low as the team has ever finished.

Kudos to the team for explaining what went wrong, in a press release today. Read on for Honda’s inside track.

Team Honda HRC today confirmed that the double DNFs by Cole Seely during the Motocross of Nations at Matterley Basin in Winchester, England, last Sunday were caused by identical shock-absorber failures on his CRF450R. Seely was forced to withdraw from the muddy first and third motos after the spring holder on his factory KYB shock became dislodged, allowing the spring to drop.

“Clearly, we’re very disappointed by what happened at the Motocross of Nations,” said Takashi “Sam” Mishima, Manager of Motorcycle Sports at American Honda. “The factory KYB shock on our bike uses a cup-shaped spring collar with a slot where it slides over the shaft, and when the mud packed on the bottoming bumper during the first moto, enough force built up to shift the collar out of place. We used this same setup the entire AMA Pro Motocross season, including at muddy races like Unadilla, but this was the first time we experienced this issue. We replaced the entire shock for Cole’s final moto, but the same problem occurred again. Normally with issues like this, it’s difficult to even recreate them again, so the fact that this problem occurred twice on the same day suggests there was something particular about the Matterley Basin track layout and/or the consistency of the mud that created the perfect conditions for the problem. Honda customers should know that the retaining system on the production Showa CRF450R shock is different; in fact, the system is the same as that on the factory Showa shock used by our MXGP counterparts at Team HRC, whose bikes didn’t experience this issue at the Motocross of Nations. Obviously, we’ll look into this along with KYB and address it for next season, but in the meantime, we offer our sincere apologies to Cole, and to American motocross fans for the fact that Team USA’s results were so significantly impacted by this issue.”

KYB would also like to acknowledge the impact the failure had on the U.S. effort and offer their apologies to the MX community. Countermeasures and design updates are currently being instituted to insure this type of situation does not happen again. KYB adds that only factory KYB-issued parts for HRC factory bikes and race teams are affected.