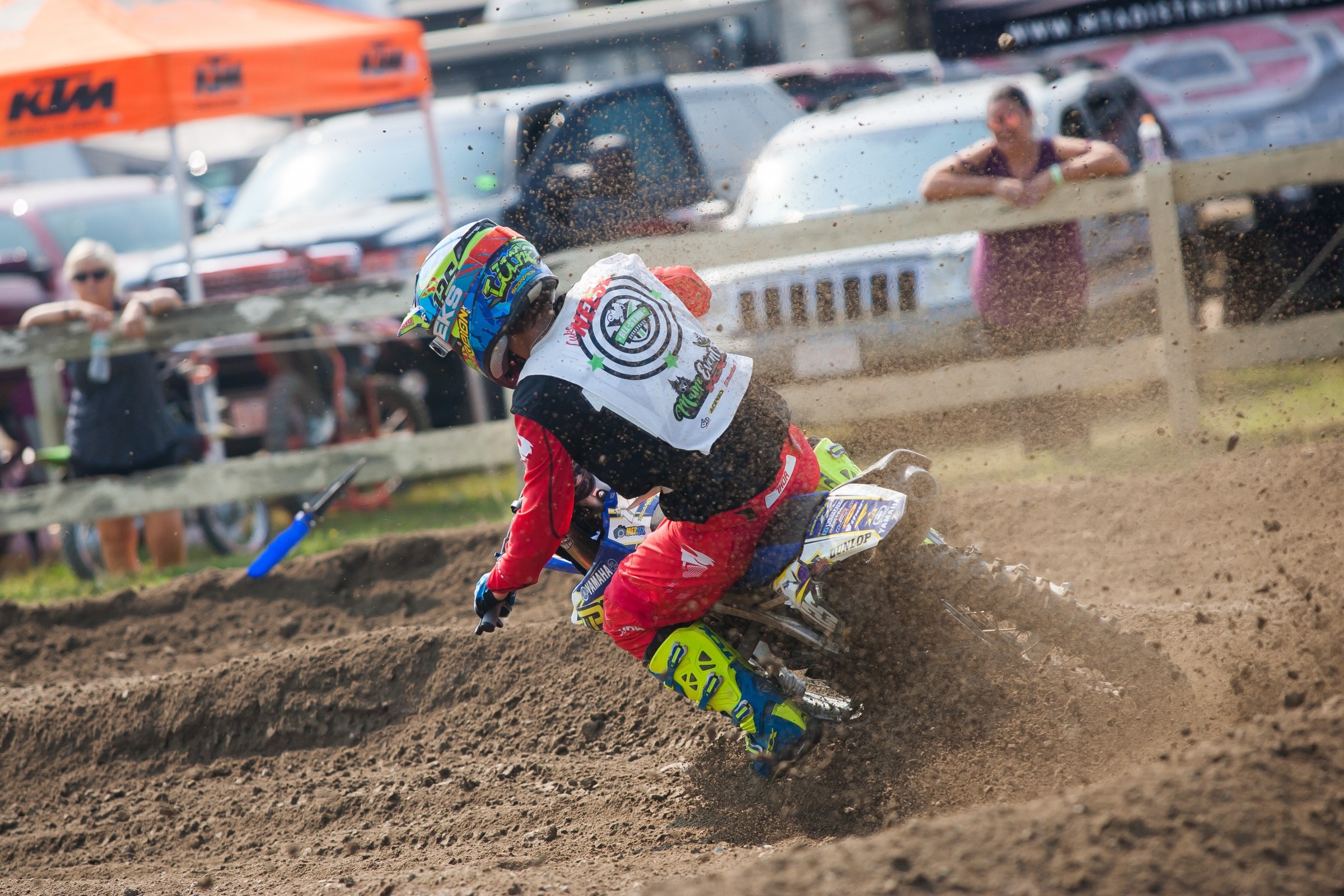 Luke Neese got some big billing coming into the Racer X Maine Event over the weekend, garnering the All-Star bib as the man to beat in the Schoolboy Class. He was also signed up for 250 and 450 B, and ended up not only grabbing the Schoolboy championship, but was unbeatable in 250B as well. He added in a moto win in 450B, but a crash in moto one dropped him out of title contention there.

Two championships makes him a bad dude, and maybe one you’ll be seeing up front as a pro before long. Luke, who rides for Triangle Cycles Yamaha, is the son of former AMA Arenacross contender Jim Neese, and he spent the summer training with Gareth Swanepoel, which meant motos alongside Cooper Webb and most of the Yamalube/Star Racing Yamaha guys. That’s some good company!

As one of the best riders of the weekend, we grabbed him for a quick interview after he visited the podium.

Racer X: Okay rate this. How did it feel?
Luke Neese: Great. Came out with two overall wins in the end. 250 B and Schoolboy. Awesome. Super excited for that.

How was the track?
It was perfect. Track stayed rough all weekend and got really technical at the end. I liked it.

Explain your background. Your dad was well-known from his arenacross days as a guy who could win races, and also had some success in supercross and motocross.
Yeah, he hasn’t been doing too much riding now, but we actually did a pit bike race together last year at Mini Os. I think that was his last gate drop in four years, and we actually won the pit bike race! It was a good deal.

A team race?
Yeah! We even had to get off the bike and switch granny panties and everything! I was a little worried going into that one, but I was excited to see him do well—we won! I’m actually trying to get him to race the Greensboro Arenacross with me next year, since I plan on doing arenacross as a pro. Maybe we can both race it.

So potentially a year from now, you’re pro and getting ready for supercross in 2019?
Yeah.

So compare racing indoors and out. I’m assuming you’ve done some amateur arenacross?
Yeah I’ve done some Sunday arenacross stuff and all that, and last year I had kind of a supercross setup and rode supercross a lot. I like it a lot, and especially my dad being an arenacross champ, that helps out a lot, too.

Yeah, so how did that all work? Was he just dying for his kid to get on a bike and go fast or did you get into this on your own?
He definitely never pressured me or anything like that. It was always just kind of my thing and what I wanted to do, and I actually played baseball and things like that a little bit. When I started to get on 80s is when I started to see things a little more seriously, and then, yeah, after that I was just kind of all over it like I am now.

So in the early days, it was just for fun?
Yeah, I went to Mini Os when I was on 60s, but that was just playing around. I tried for Loretta’s and all that, but I wasn’t there at the time like I am now.

So you’re a little newer on the scene, really?
Yeah. 125s I kind of got my name out there a little bit with the Vurb Classics and Mini Os.

Loretta’s hasn’t worked out so far?
No it hasn’t. Loretta’s, I’ve gotten tight with arm pump and just bad luck, really, so I haven’t been able to prove myself.

So you’ve told me you ride with Cooper Webb and his gang there in North Carolina?
Yeah Cooper, [Aaron] Plessinger, the whole Swanny [Gareth Swanepoel] team. I rode with them before Loretta’s, it was cool. Now I’ve kind of taken a few months off now, but I’m hoping to get back with them before Mini Os.

How gnarly is it?
It’s pretty gnarly. Those guys are fast! No doubt about that. Pretty impressive to see what they do.

Do you do the same type of training they do?
Right before Loretta’s, since I was training and doing motos for that anyway, I did the same stuff they did. Whether it was motos, sprints, whatever it was. We were pretty much always riding, so yeah, everything I was doing was similar to them. I wasn’t on the food diet they were, but working out and riding, it was pretty much the same.

Whole new respect level?
Oh yeah, it’s pretty hard what they do. I wasn’t quite ready for that when I first got there, but I liked it. I want to do more.

Now you have a long drive home? Mom has to get back to work?
Yup, she has to work Monday morning. Someone has to pay the bills around here!