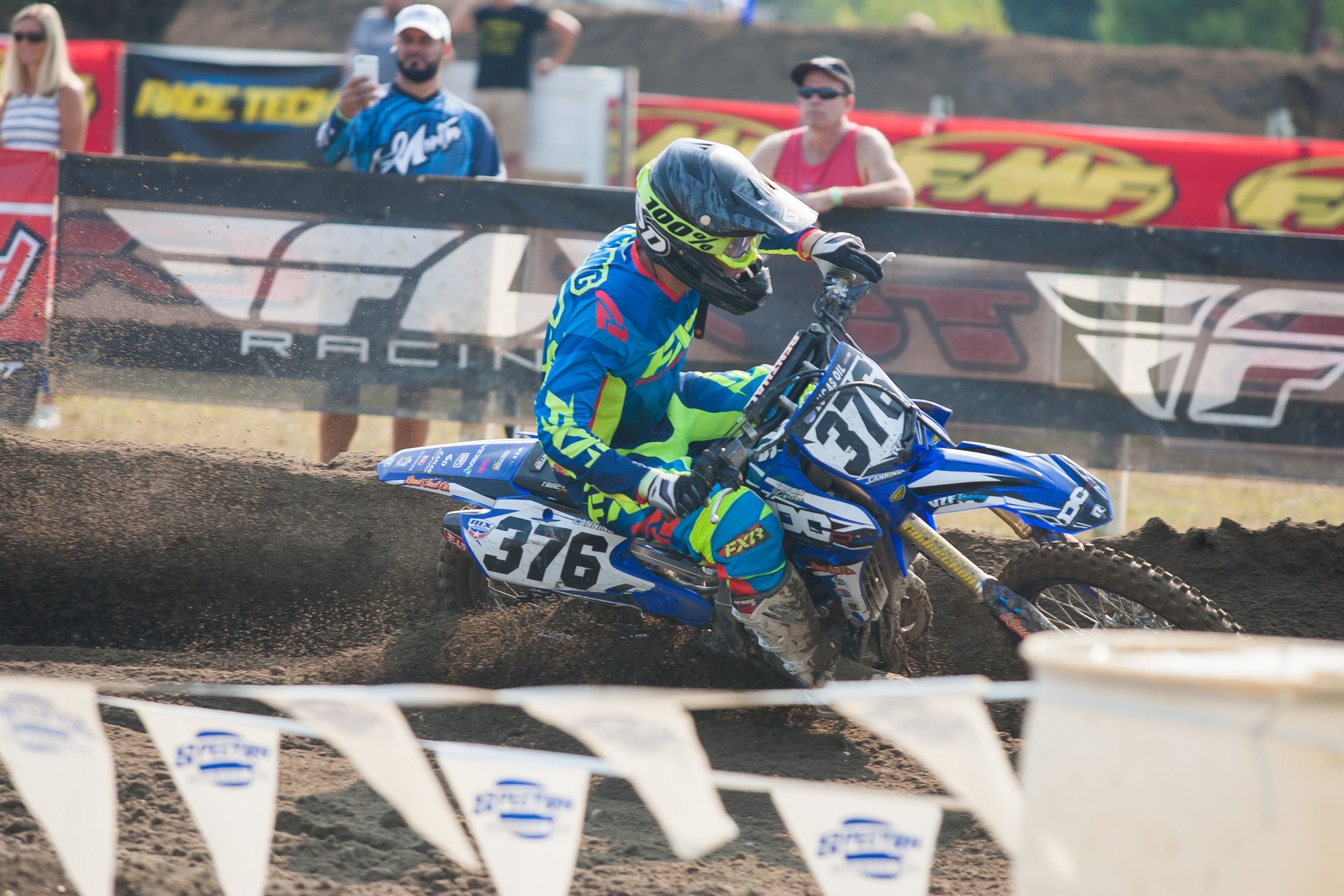 450 Words As Tough as They Come

Chris Canning is the kind of grizzled, no-frills, blue-collar, tough SOB you picture when you think New England motocross. They build work horses up there, and at one of New England’s biggest races—our Racer X Maine Event presented by TCX over the weekend—Canning repped the home folks well by winning the 450 A class and finishing second in 250 A. It was would really be a toss-up between Canning and Florida’s Ramyller Alves if you were trying to decide who was the fastest rider throughout the weekend.

Where Alves is all youth and scrubs and style, Canning is just all grit. He practically lives out of his haggard, old Sprinter van; he was riding through pain after a major shoulder injury last winter; and his bikes were basically stock. He does not care. Canning races the local NESC series, which routinely packs full gates for long, gnarly motos for what feels like a 100-race series. They just race all the time up there—no practice facilities or “waiting to just race the major amateur races” up there.

Canning has done his share of major races, chasing Lucas Oil Pro Motocross for a while, and doing it the hard way. He spent two years straight up living out of his van—for real. One year his van broke down in Utah, and he was so broke he didn’t have the money to fix it. So he called U-Haul and rented a box van for the weekend (which was cheaper than fixing his van) so he could race the Thunder Valley National. He also told the U-Haul guy he would take a few hundred bucks for the left over carcass of his old van. The U-Haul guy took the deal, so Canning had enough money to make it all the way home. Then he bought a new (used) Sprinter, but it had been previously used by a medical supply company, and he got pulled over once for not having a license to carry hazardous materials—even though he wasn’t actually carry medical supplies. The solution? He spray painted the van flat black, covering the old logos.

Canning also chased Road to Supercross points in Amsoil Arenacross, even racing with a broken wrist to make mains and get the points he needed. He earned his supercross points, but got hurt the day before he was going to head out for the races. Also, one time he was racing the Millville National and busted the transmission on his bike. He drove all the way back to his base in Coventry, Connecticut, got the bike working, then drove all the way back out to Washougal. Then he drove to Loretta’s to help coach some kids down there, and then back up to New York for the Unadilla National. That’s one lap of America in about three weeks.

“I do a lot of driving,” says Canning.

He explains all this with a smile—broken and stock bikes, no money, no home, injuries, and bad luck, it does not faze him. He’s a motocross racer’s motocross racer. This is what he does.

“Even when I’m hurt, it’s really hard to tell myself to not just get back on the bike,” he explains.

This winter he tore himself up badly, breaking the ball off of the top of his humorous, and also tearing his rotator cuff. Even right now he has very little range of motion and strength in his right shoulder, but he says now it usually only hurts after the races, not during them. That’s good enough to get back out there. For his efforts at the Racer X Maine Event, he picked up about $2,500 in purse money, which goes a long way.

We talked to him after his 450 A victory.

Racer X: So we had some fast kids come up here just for this race, then we have some fast guys from the area. How would you classify yourself? Work horse New England guy?
Chris Canning: Yeah, I race the local NESC series; I even raced the race they had here [MX207] last weekend. So, yeah, that’s how I’d classify myself.

So what motivates you as a racer? Is it chasing points up here? Contingency? What keeps you going.
I got injured down in Florida over the winter and it was pretty bad—I was off for almost eight months. I showed up for the Southwick National pretty much straight off the couch on the two-stroke. So right now I’m trying to get back into the flow of things, make a little money and have fun racing.

I notice in the New England area, people actually race—they don’t just ride and practice, you guys take gate drops every weekend.
Oh yeah, NESC we have full gates for both pro classes, and you’re talking four 20-minute motos every weekend. So that’s a lot of racing.

Take me through the motos here. Obviously 450A, for starters, was a good one.
Yeah 450s, I have power on those bikes. Those kids are on full-mod motors and A-kit suspension and my bike is stock…

You’re talking 250 class?
No, 450s too. But in the 450 class the bikes are faster so I can kind of get away with it being stock a little more. The 250 class, I’m definitely out powered, so that one is always tough. I do what I can.

So 450 moto 1 Ronnie Stewart got you for the win. You were struggling with a bike problem?
Yeah I started behind him and kind of settled in right there and then four or five laps to go I was going to put a push in. I was ready to pass him, I had it, I think, but then I got a flat tire. So I just kind of rode it out.

Next few motos were good.
Yeah ended up winning the last three motos.

So 250s, your bike is like stock, stock?
Yeah, bone stock. Factory Connection did the suspension. That’s it.

Not even an exhaust?
Nothing. Stock exhaust.

Big disadvantage in the 250s, I’d think.
Yeah, especially here. I love this place but it’s pretty high speed. It’s a horsepower track. Some of the tighter turns in here I could catch back up, but we get to these back straightaways and they’d just pull me 50 feet. But the track was awesome this weekend, they do a great job up here. Had a lot of sand and got really rough.

That third moto in 250 A was one of the best I’d ever seen. You, Alves, and Pinhancos passed each other over and over.
Yeah that was a good one, we went back and forth. We were going at it hard. I started about sixth and ended up coming through for the lead, had a couple bike issues that caused me to make some mistakes, I lost the lead but then Pinhancos went down, I ended up finishing second. But no excuses, those guys were riding fast, but I felt like I had that one.

So explain the deal with actually living in the van. You really just live in that thing?
Yeah. I travel in that thing and when I did all the Nationals I lived in it basically for like two years. Now it’s kind of half and half; I own a house with my brother.

But there was a time you literally didn’t have a place of your own?
Yup, I didn’t have nothing.

Where’d you get your mail?
Had it sent to my brother’s house. I traveled a lot. The van I have has been in every state except Alaska and Hawaii. All 48 states.

This is just full love of moto here?
Oh yeah. Even when I’m hurt it’s hard to keep myself from getting back on the bike.