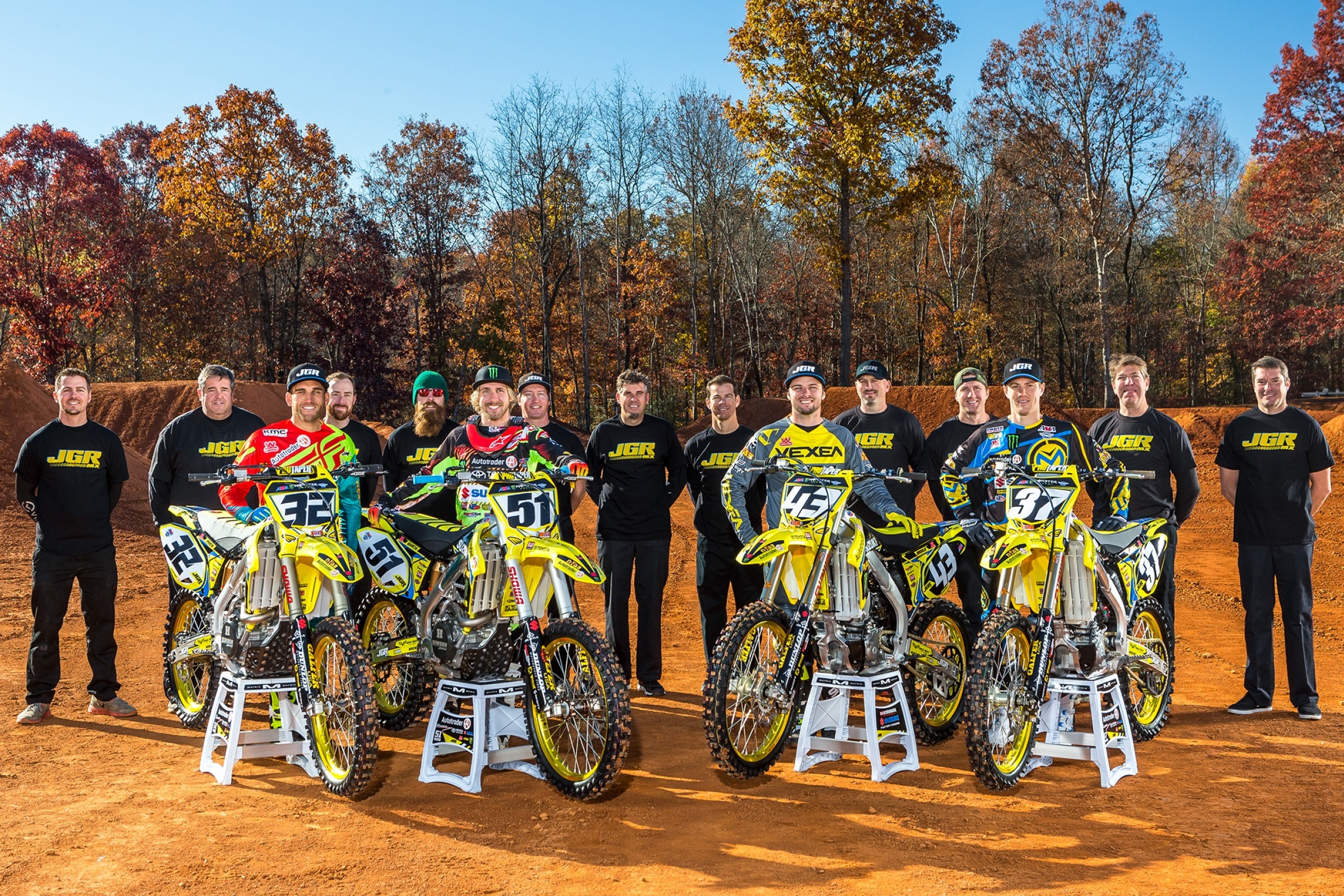 With the announcement last week that RCH and Suzuki had mutually agreed to parts ways at the end of the 2017 Lucas Oil Pro Motocross season—at which time RCH will shut down—the focus turned to AutoTrader.com/JGR Suzuki, as they are expected to take over the factory operations. Team manager Jeremy Albrecht told us after Washougal that a deal is not in place at the moment, but that they hope to reach an agreement soon.

Team rider Justin Barcia went down hard in the second qualifying session, and was taken to the local hospital for precautionary reasons. Fortunately, he was released that same day and returned to the track. We caught up with Albrecht for an update on Barcia, the future with Suzuki, and more.

Racer X: How did it go? For [Justin] Barcia, what’s the update?
Jeremy Albrecht: Barcia actually went to the hospital. They had him go. He did get a concussion. He said he had a sore neck, so that’s why they put him on the board. He was kind of laying there, kind of more of a shock that he crashed because it happened so quick, that he was still laying there trying to figure out what happened. Then he said his neck hurt, and as soon as you say that they stop you, which is good. So, he really went just to make sure. Checked everything, X-rays, had a CAT scan. Everything came back good, so he got released. He came here. He came back to the track in-between motos. I was happy to see him. He seems good.

Was he out-out [knocked out] forever? We see him not moving, but I don't know if he’s out for five minutes or if he was just laying there.
When I got there, he seemed fine.

He was already awake by the time you got there?
Yeah, whoever saw him first said they thought he was out, but I don't know how long he was out. When I got there, he was up. He was good.

It wasn’t like the full 15 minutes?
No, not that long. When he said he hurt, they didn’t want him to move. So, that’s why he laid there longer. Then they put the board and everything. He was in the middle of the track, so it’s better to be safe, for sure. Obviously, I’m glad they do that. Alpinestars [Mobile Medical Unit] guys are awesome to help us. That’s why they’re here. That was a bummer because he just got his good lap time, too. He went into second right then. Felt great. That was the bummer—he finally was feeling really good, and just did the whoops so good that he shot off that thing in a big whip, and didn’t land it.

Even for Barcia, that was a little too sideways.
[Laughs] Yeah, even he couldn’t bring it back.

[Weston] Peick rode good.
Yeah, first moto was really good. Second moto he had a little brake fade, so he had a hard time the second one. But he rode solid. He passed a lot of guys. We just need better starts with him. Obviously, [Justin] Bogle’s got his starts figured out on his Suzuki, so we need to do the same. I think Peick would have a top five ride no problem with some starts. We need to work on that this little break.

"We just all try to do the best job we can and it’s up to them in the end. It’s their budget. We’re just happy to be riding Suzukis this year."

You shouldn’t have mentioned an RCH guy. Everyone’s assuming now that you’re taking all the Suzuki support. Can you update us?
We don’t know yet. That all just happened. Obviously, we are working out with Suzuki, trying to get a deal together, but it is not done yet. We’ve been working on it since Anaheim 2. We were going to be with Suzuki with or without RCH. It just is a matter of what the real plans are for the future. But we were planning on being Suzuki anyway. This obviously changes things for everybody, but it’s Suzuki’s decision on what the real future is for what their plans are really. It’s not up to me.

It seems like it’s been a really good relationship between you and RCH the one year you had together, including loaning out [Matt] Bisceglia.
Yeah, it’s been actually really great to work with Suzuki honestly. They treat us with respect. They’re happy with what we’re doing. We’re happy with what they’re doing. The RCH guys have been really helpful as well. Really, I think that they paved the way to make this relationship better for all of us. When I talked to Suzuki in 2012, we weren’t allowed to do anything, it was going to be the factory team’s deal. So now, it’s a little more open that we all can help each other. So actually, RCH guys are using a head that we developed. So we share all that stuff. We did a piston together. Dean [Baker, of JGR] and Aaron [Johnson, of RCH] worked together on a piston. Then this rider thing popped up. [Broc] Tickle got hurt. Bisceglia’s been getting ready. I was already trying to figure out how I was going to get five bikes to the races because Phil’s [Nicoletti] coming back. So, it was already going to be a mess. They already offered before Tickle got hurt that they would take a guy for me. So, they were already offering first.

They were going to put one of your bikes in their truck and then roll it over here for the race or something like that?
Yeah. The way I look at it, the 250 thing, Suzuki is technically paying Bisceglia anyway, so that’s a Suzuki team. It doesn’t really matter. It’s all the same.

But it doesn’t always work that way with some brands.
It doesn’t always. There’s definitely usually … I guess you want to be the top guy or whatever or you don’t want that team to do good, but I don’t feel like that at all. Our thing has nothing to do with what RCH does, and they don’t feel like anything that we’re doing—it doesn’t affect each other’s deal. We could talk crap about them or help them, teams have done it all ways, but it doesn’t matter. Because in the end the big plan, whatever it’s going to be, if I like them or don’t like them, it doesn’t change anything. It’s not my decision. It’s Suzuki’s decision. So why not just try to be cool and help them and let them help us? We just all try to do the best job we can and it’s up to them in the end. It’s their budget. We’re just happy to be riding Suzukis this year. I do feel like it’s going to be a long-term deal anyway. When we did this, we were talking 10 years. We’re not trying to do it for one year. We did a one-year deal to get started with them because we did it so late that there was no budget. That’s why we’ve been talking about it since Anaheim 2, is trying to figure out where we fit.

You got the new bike launch [2018 RM-Z450] at your track coming up.
New bike launch next week, so that’s exciting. Been working pretty hard to spruce our track up, make it look cool. So, we’re excited to have all the people there. Really the funny part is nobody from Suzuki has been to our shop except for Lee [McCollum, Cunningham’s mechanic] and a few other technicians. But Chris Wheeler’s [Suzuki’s new motocross manager] has never been there. The president, vice president … nobody’s been there. So, that will be kind of cool to show them. It’s just going to be a bonus, really, because they’ve never seen our track, never seen the shop. So they’re all coming. I hear that they’re going to Loretta Lynn’s actually, which they’ve never been. They’ve only seen pictures. So, them coming to our shop and coming east lets them go to Loretta’s and see what that’s all about. So, this is all good stuff for Suzuki getting excited for the future really is what I like about it.