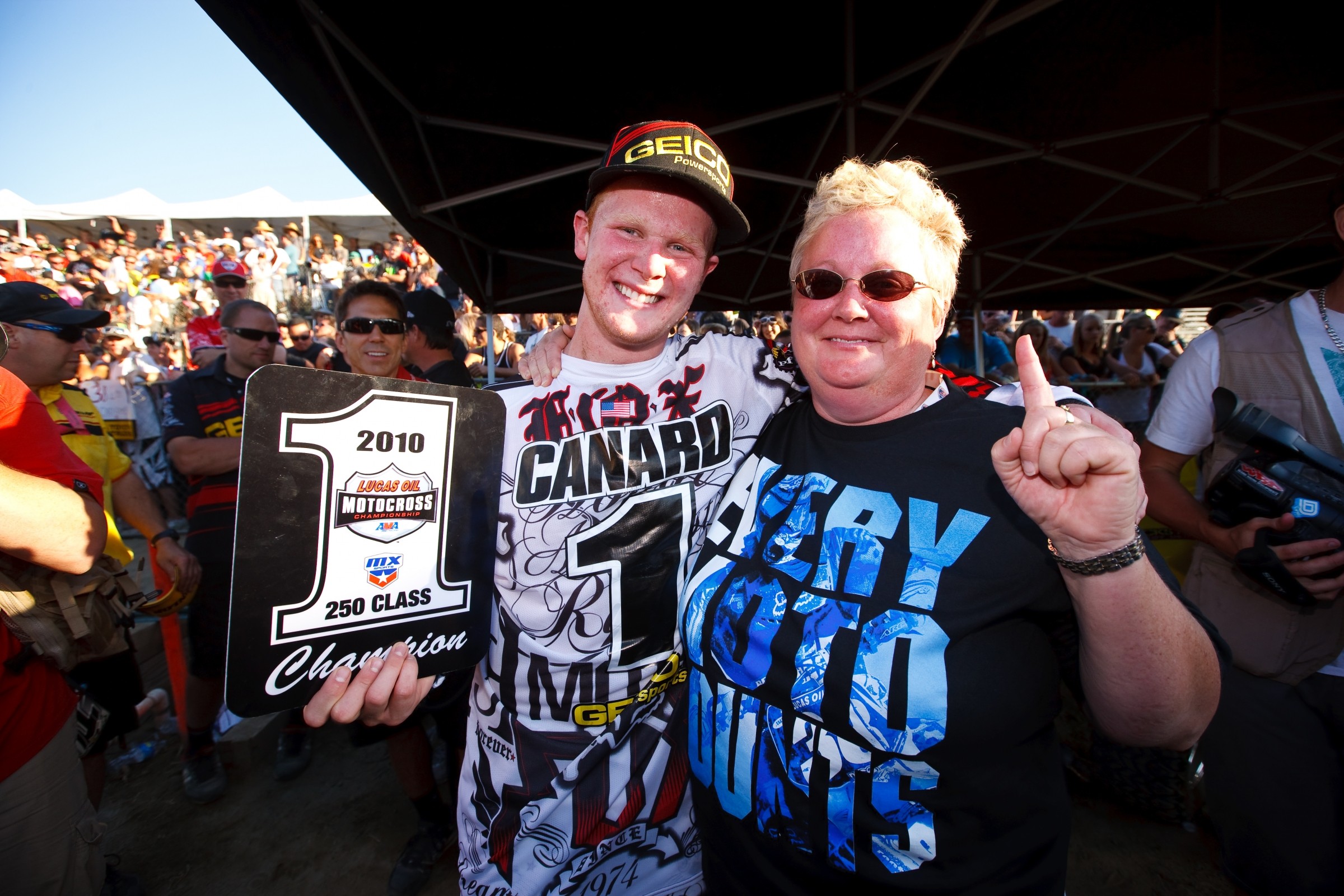 There might not be a better rider to dissect through The List than Trey Canard, who specialized not in consistent excellence, but rather a series of high marks. When Canard had a hot hand, he could beat anyone anywhere, on 450s or 250s. The valleys that would sometimes follow those peaks just made his next comeback all the more emotional, dramatic, and impressive.

You never knew when the next big Canard win was coming, but you also knew never to bet against it.

Here are some of the highlights.

Canard wins the first supercross he ever enters—Atlanta in 2008.

The next weekend in Indianapolis, 250SX East Region favorite Ryan Villopoto catches Canard for the lead, they collide, and Villopoto goes down. Trey is two-for-two as a pro, and has also led every single lap of his first two races!

Hellacious rain descends on Daytona, where Canard again fights off Villopoto to win one of the wettest supercrosses ever, making it a three-for-three start to his pro career.

The Battle of St. Louis

One of the most famous title bouts ever. Canard cools off a bit after his hot start, Villopoto gets the points lead within reach, and the 250SX East Region finale becomes a winner-take-all showdown. Villopoto catches and passes Canard for the lead, but Trey responds, hanging it out, getting inside, and then …Villopoto ends up in the finish line scaffolding. Dirty? Just a mistake while riding on the edge? Just doing what has to be done for a title? Opinions vary, but Trey, as a champion in his rookie season against the mighty RV, has made his mark.

In 2010, Team Honda needs a fill-in rider for 450SX when Andrew Short goes down with injury. They grab Canard, but he crashes out of his debut in Indianapolis. The very next week, he finishes second in Atlanta! Then puts in four-straight third-place finishes, giving him five podiums in six attempts on the 450.

Canard’s 250MX days featured some good races, but also some bruising injuries, like a broken femur while batting Ryan Dungey and Ryan Villopoto at Washougal in ’08, and a broken wrist while leading High Point in ’09. He started the 2010 campaign by holeshotting the first moto and fading back to seventh, hardly a championship-style beginning. A podium and some laps led at Thunder Valley signaled a turnaround. That’s where the comeback begins.

Many experienced race watchers will tell you a rider almost needs to luck into a win to get that final bit of confidence—you have to believe you can win, but you can’t get that belief until you get that win. Canard’s breakthrough happens at RedBud, where he finishes fourth in moto one, but wins moto two, and takes a surprise overall win once Christophe Pourcel fades back to 1-5 scores. Canard doesn’t even realize the overall is his until his team tells him after the moto. But once he gets it, he knows how to do it again.

He followed it with overalls at Spring Creek, Washougal, and Unadilla, building a four-race win streak after previously having zero career 250MX overalls. He gets third at Southwick, then, in one of the finest races of his career, beats Pourcel straight up for a 1-1 at Steel City putting the title within reach. Pourcel crashes out of the finale at Pala Raceway in California, and Trey’s Cinderella championship comeback is complete.

Canard’s 250 title makes him an easy choice to ride for Team USA in a Motocross of Nations home race at Thunder Valley in Colorado. Crashes and bad starts hold him back in the individual motos, but he’s consistent enough to help the team win the Chamberlain Trophy.

In a season preview show for Monster Energy Supercross, six-time AMA National Champion Jeff Stanton predicts Canard, a rookie, will win the 2011 450SX Championship. Home cooking for the long-time Honda man, or did Stanton just know something special was brewing?

It appeared to be the latter, because against a field of Villopoto, Dungey, Chad Reed, and James Stewart, Canard is in the mix the whole way, wining Houston, Jacksonville, and Arlington, leaving him just 16 points out of the lead after 13 races. A few weeks later, he breaks his femur when his bike breaks while motocross testing.

Canard returns for Millville and promptly puts it on the podium for the day in his first-ever 450MX race. Unfortunately, he would re-break his femur the next weekend at Washougal—yes, the same track where he broke his femur three years earlier.

In one of the most horrific incidents in supercross history, Canard gets landed on by Ryan Morias on the first lap of the 2012 Los Angeles Supercross. The crash isn’t anyone’s fault, but the damage is devastating. Canard breaks his back, ending his season and possibly his career. Morias suffers a concussion that ends his professional career.

Canard sets his comeback date for Anaheim 1, 2013, and lo and behold, in his first race in 50 weeks, he leads the main event down to the last lap, with the fans going crazy. Davi Millsaps stays close and passes Trey to get the win, but even Trey’s second-place finish is awe-inspiring, since his career looked to be over the previous January.

Through most of 2013 and 2014, Trey is good but can’t quite get back to his Anaheim 1 2013 form. After the final off-weekend of the 2014 season, Canard shows up at Unadilla with new suspension on his Honda, switching from Showa to KYB. He suddenly becomes a new rider, winning the second moto that day, and then finishing the season with a 1-1 sweep of the 450 Class at the Indiana finale. Trey is back!

Canard is still hot entering the 2014 Monster Energy Cup, and he wins the first two races going away. One more win nets him the Monster Million payday, but he crashes while stalking Millsaps for the lead. He loses the $1 Million (and even the event overall), but serves notice he’ll be a contender in 2015 supercross.

Anaheim 2, 2015, marks the famous “Black Flag Gate” when Canard crashes into Chad Reed, then Reed gets up and punts Trey off the track. The AMA/FIM then black flag Reed. A week later, they’re battling for the lead in Oakland, and Trey takes off with the victory, his first 450SX triumph since that magical 2011 rookie season.

Trey’s hot again, and two weeks after his Oakland win he beats Ken Roczen is a scintillating 20-lap duel to win the San Diego Supercross. It’s the last race win of his pro career, but it proves one last time what so many people already knew: when he’s on, Trey Canard has all-time ability.