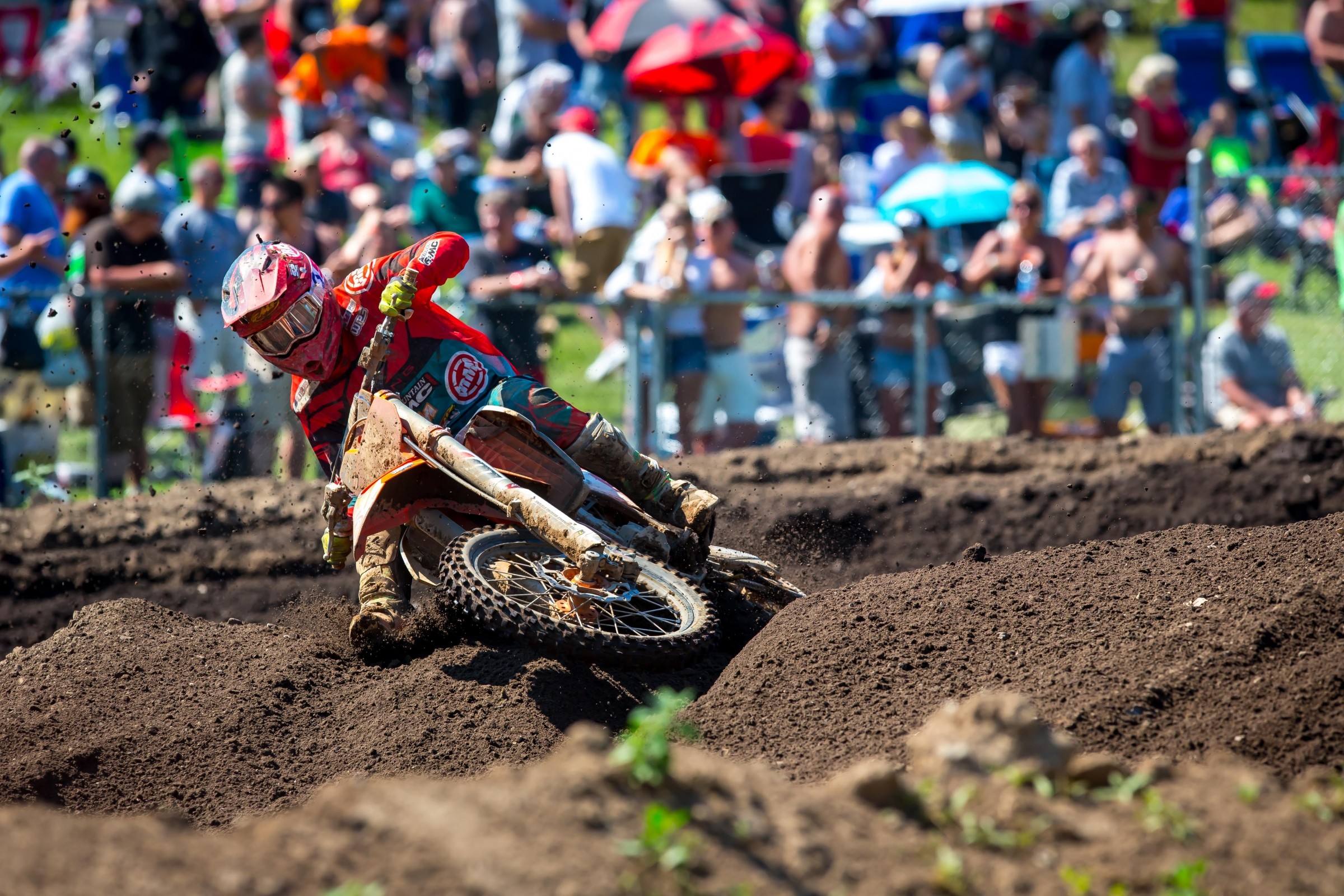 Things went from bad to worse for Blake Baggett in the second 450 moto on Saturday. After going down on the first lap following an incident with Jason Anderson, Baggett wasn’t able to make his customary charge through the pack like we saw at Thunder Valley and Muddy Creek. While he made a late charge to work past Trey Canard and Christian Craig to salvage 10th, something appeared a little off. After the race we found out that Baggett injured his thumb in the crash and was expected to undergo an MRI on Monday. His team told us that X-rays taken at the track by the Alpinestars Mobile Medical Center were negative, but that his thumb is at least sprained. Baggett, who entered the weekend with a four-point lead in the championship, is now 13 points back of Eli Tomac as we head to arguably Tomac’s best track, Southwick, this weekend.

It was just two years ago that Justin Barcia went 2-1 at the RedBud National to capture the 450 overall. On Saturday, Barcia once again found himself in the lead and was able to hold off a hard charging Tomac and Jason Anderson for seven laps before losing the rear and going down. Barcia would remount to finish sixth in the moto and fifth overall on the day—his best finish on the year. Since missing High Point with a concussion, Barcia has gone 5-10-7-6 and looked much more comfortable than he did earlier this season.

Late last week it appeared Josh Grant would miss RedBud due to a forearm injury sustained in practice at Muddy Creek. The team announced that Grant was out after attempting to ride earlier in the week. Apparently Grant rode on Thursday as well and felt much better so he decided to race. Despite the injury, Grant logged solid 10-5 moto scores to finish seventh overall.

“I think I made the right decision to race this weekend after all,” said Grant in a statement. “Although my forearm is sore, I’m just pumped I was able to race today. I wasn’t too happy about getting caught up in the opening crash in moto one, but I feel like I rode well today and I’m ready to take this momentum into next weekend.”

Honda HRC got Christian Craig back for RedBud after he sustained a boxer’s fracture in a crash at Glen Helen. Craig attempted to race at High Point, but made it just a few laps before pulling out of the moto. He missed Muddy Creek as well. In the first moto Craig got the holeshot and led three laps before finishing fifth. A 12th in the second moto dropped him to 11th overall on the day.

“It was a decent day after a couple weeks off with a broken hand, so I’m glad to be back at the races,” he said in a statement. “Qualifying went okay and I tried to go into the motos open-minded. I wanted to come back where I left off at Glen Helen, potentially in a podium position. I got the holeshot, which was awesome; my starts have been on point this whole season. I led some laps, but then tightened up and got arm pump around lap five or six. I stayed in fourth most of the race and just focused on clicking off consistent laps but unfortunately, Blake [Baggett] got me toward the end so I finished fifth. I felt good though. In moto two, I flinched at the gate and got a terrible start. I focused on making some quick passes early in the race but once I got into 13th, I was kind of alone most of the time. I made a few more passes toward the end, but I just didn’t have a lot left in the tank after the first moto. Overall, I’m happy with the first moto, so we’ll build on that and work on getting stronger in the second moto.”

Craig’s HRC teammate Cole Seely said he also mistimed the gate in the second moto and got a terrible start. He finished the moto in ninth, to capture seventh overall. “The first moto was good. I got a decent start and worked my way up to fourth but tipped over,” he said. “I got back up in eighth and made my way back up to sixth by the end. We made a few more bike changes before the second moto, which I was pretty happy with. I mistimed the gate and got a terrible start and definitely suffered from that. I felt good riding though and think I’m getting stronger, but it’s frustrating. I’m making some big changes to my program to do better, but there are some things I’m still struggling with. Like I said, I feel like I’m getting stronger, so with a little more time it should come full-circle.”

A number of riders, including Weston Peick and Broc Tickle, were caught up in a first turn pileup when Cooper Webb tucked the front end and ejected into the trackside banners. Webb wasn’t able to continue the moto. Peick came back to 14th in the moto and finished 10th overall on the day after a fourth in moto two. As we reported yesterday, Tickle struggled all day after dislocating his shoulder in practice. In a statement, Tickle said he hopes to race Southwick this weekend. Privateer Henry Miller, who finished 15th overall on the day, had an up-close view of the crash.

RCH/Yoshimura Suzuki’s Justin Bogle said he hurt his wrist in a first moto crash while running fourth on Saturday. Bogle was able to finish both motos, finishing eighth overall, but he said his wrist did bother him throughout the day.

“This weekend at RedBud was not too great and not too bad,” he said. “The first moto was good. I was running a good pace in fourth and I felt like I had that position locked down but I ended up going down in a sweeper and landed funny on my wrist. I struggled with that for the rest of the moto and the rest of the day. Second moto, I got a good start but I made a handful of mistakes during the first lap and kind of shot myself in the foot. Once I settled in I was able to make a couple of passes. Unfortunately, I was pretty far back to do anything with it. I ended up eighth overall. I’ll keep working and get back up there in the top five. I feel like I should be there every week so that’s the goal.”

From nearby Lansing, Michigan, Yamalube/Star Racing Yamaha’s Mitchell Harrison had a career day at RedBud. He led three laps in the second 250 moto, held off a valiant charge by Alex Martin and Dylan Ferrandis late, and even pushed Zach Osborne all the way to the finish to lock up his first career moto podium. While he’d miss out on the overall podium by two points, his fourth overall finish was a career high.

Another surprise rider at the front of the 250 pack in the second moto was Traders Racing Yamaha’s Luke Renzland. The third-year pro from New Jersey ran third for a majority of the moto before dropping back to sixth late in the race. He finished 14th overall on the day.

“RedBud was awesome... Ran 3rd for about 25 minutes of the second moto, let a couple dudes sneak by at the end but I ended up 6th at the checkered flag,” he wrote on Instagram. “One hell of an experience running up there for so long. Now I know I can do it, and I know I have what it takes... that start makes all the difference! Bummed I had a crash in the first moto and couldn't start my bike which made for a crappy result, but that second moto turned it all around for me. Let's carry the momentum into southwick.”

For a second straight week, GEICO Honda’s RJ Hampshire experienced bike problems. In the first moto, Hampshire was running inside the top 10 when his bike let go. He returned for the second moto but made it just two corners before he experienced another mechanical.  “We are in a way better place than I have been before,” he said in a statement. “DJ [practice mechanic] and I do our own thing back home and a lot of people may not agree with it, but I'm loving every minute of it. I believe in my team and know we will be battling for a podium here soon. Considering I was sick all week and could barely make a 20-minute moto on Thursday, I was happy to make it that far in the first moto. We will give it another go next weekend!”

Cameron McAdoo, who missed the last three rounds due to a shoulder injury, reinjured the shoulder in a first moto crash and was unable to line up for moto two. He’ll be revaluated this week. His status for Southwick is unknown at this time. “I was really excited to get back to racing at RedBud,” he said. “I got off to a pretty good start in moto one and was running with the front group, which I was happy with, but unfortunately my day was ended early with a small crash that resulted in re-injuring my shoulder.”

After a fourth-place finish in moto one, Austin Forkner wasn’t able to get the start in the second moto and finished 14th. On the day, he finished seventh overall. “The pace again was really fast and unless you’re up front at the start it’s hard to make up positions,” said Forkner about his second moto. “The track actually held up really well, but there were spots that were still challenging. I just tried to make up as many positions possible, but it was hard after being so far behind from the start. We’ll look to make Southwick a great race next weekend!”

Another solid day for rookie Chase Sexton. Besides being one of the first 250F riders to jump LaRocco's Leap in practice, the GEICO Honda rider finished ninth overall in his third race back from injury. “Overall the day was good!” said Sexton. “I was actually just having a lot of fun being back in the Midwest and riding RedBud! First moto got an awful start and fell in the third turn but came back from almost last to 12th. Second moto was fourth or fifth off the start and then when Jeremy fell I ran over his bike and got passed by a few people but was able to make some passes back and just put in some solid laps to get seventh. Overall happy with the weekend and looking forward to getting back to work!”

Prior to the start of the day, Justin Hill told Georgia Albertson that he really needed a start. Well, he finally got one in the second 250 moto and rode to his best finish of the year—fifth place. He finished 12th overall on the day. “Things definitely felt great in that second moto,” said Hill. “When you’re able to get a good start and race up front, it feels amazing. I am hoping this will be the boost I needed to put in solid motos in the remainder of the season.”