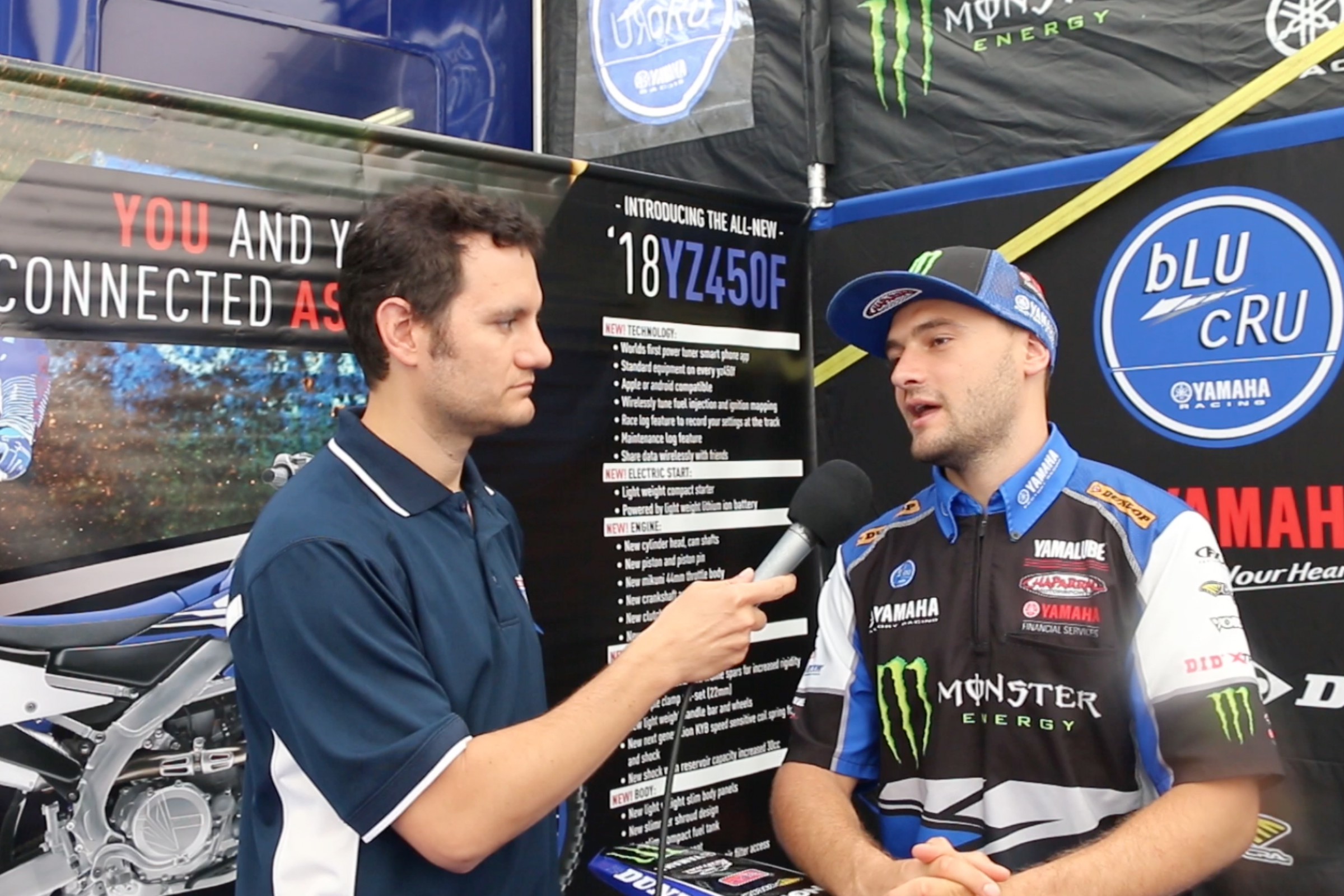 Muddy Creek was a complete waste of my time. On Thursday, I went there for press day and even lugged my 2-year-old son on a three-hour-each-way drive so he could see some dirt bikes and I could do some interviews during press day. The interviews worked despite his attempts to wreck them. (My favorite moment was interviewing Cooper Webb, and my little guy is running around yelling, so the Yamaha guys offer him a candy bar to distract him, and he then runs up to me during the interview to say “Look what I got for you, daddy! A candy bar!” which completely ruined the plan.)

Unfortunately, you folks weren’t able to see these interviews. Not the Cooper Webb one. Not the Marvin Musquin one. Not the Zach Osborne, Shane McElrath, or Martin Davalos interviews. Or the Alex Martin interview.

We loaded the Alex interview up first, then the YouTube comments started rolling in.

Notice how YouTube comments must always be the lowest of the low?

But here’s the thing. If you were on a computer and watched the video on YouTube, everything sounded fine. But if you tried to watch it on a phone, there was no sound at all! Same file, same upload, same everything, the sound worked on YouTube on a laptop/desktop but not on mobile. That makes NO SENSE AT ALL.

Our staff spent the rest of Friday trying to fix the problem, re-editing, re-exporting, re-uploading, trying new settings, trying new everything. Audio kept working on a computer, but it never worked on a phone. I tried searching for a fix on Google. You know how normally you type in half of your question and Google automatically fills in the rest because someone has asked before? Not the case this time—I couldn’t find one example of a person producing a YouTube video that can be heard on a laptop but not on a phone.

I was furious, knowing that all of my Thursday work was washing away, especially the Musquin interview, where we got the latest on the former series leaders’ injured knee. His explanation sounded great on desktop, but it was silent on a phone.

Alex Martin joking about punching Zach Osborne in the face for blocking passing him last week.

Osborne saying “that’s fake news” when I asked him about the punch from Martin.

Osborne explaining that he has a black eye not from a punch, but from the rock that smashed him in the goggles at High Point. He said the black eye gets worse when his heart rate goes up. Who knew?

Alex saying High Point’s second moto was one of the most embarrassing of his life, because his brother passed him for the lead.

Shane McElrath explaining his sub-par results at the first few Nationals. He said he was “riding as hard as he could but going five seconds a lap slower” than the leaders. Why? Because he was still hurt from a Seattle SX crash, but no one realized that because the week after Seattle, he won in Salt Lake City!

Martin Davalos talked about a $100 bet with his team owner Bobby Hewitt to make the top 10 in Colorado. Marty crashed three times that day but dug super deep late to salvage—tenth overall. Bobby had $100 in crash ready as Marty came off the track.

Cooper Webb saying he’s had to learn to be content with whatever finish he gets right now. Normally, all he wants to do is win, but now he’s realized it’s just a learning year and he has to be content if he comes off the track in seventh—for now. He added: “We’re gonna figure it out.”

I also joked with Cooper that Yamaha keeps ruining him by hanging posters of the all-new 2018 YZ450F in the pits, which he has to look at each time he hops on his 2017. Cooper said he’s ridden the new bike and it’s amazing. But for now, he has to focus on the ’17. He said some other stuff, but then I got distracted by the candy bars.

So all of Friday was spent trying to fix the videos from Thursday. We tried everything, but nothing worked. Finally time was up, I had to make another three hour drive to the track. On the way, I picked up our West Coast editor Kyle Scott at the Charlotte airport, and we road tripped together. Kyle’s a video guy, so I picked his brain. He’d never heard of this particular audio problem, though.

We rolled into Blountville, Tennessee, super late. At midnight, though, I thought of another way to salvage the audio—export the audio only and put it back into the video as if it were a separate file, like a song. [Ed note: We also tried that earlier in the day. Didn’t work.] So I woke up and I re-edited. Started the upload. Went back to bed at 1 am. Back up at 6 to get ready to go to the track. By then, the video was uploaded. I opened YouTube on my phone, and there was Marvin, talking. With no sound. It wasn’t going to work.

At the track on Saturday I asked members of the TV crew—professionals in the field—if they had ever heard of such a thing. A video you can hear on YouTube on a laptop, but not on a phone. No one had ever heard of such a thing. Ever. No one had any solutions. Time was running out. If the gate dropped for the first moto, the videos would be old news. So I uploaded a file for my right hand man Chase Stallo to load onto Facebook. Maybe the audio would work there? Chase got the file during Saturday morning practice, posted them on Facebook—and again the audio didn’t work. The project was officially dead. I had wasted a Thursday shooting, and wasted a Friday trying to fix.

Audio issues are quite the theme this year. The post-race press conferences, streamed to Facebook Live by MX Sports, often have choppy audio. Outdoors, you have a magical combination of internet service at the track combined with Facebook Live’s spotty reliability record, tons of background noise, and a PA system that’s only somewhat loud even at full volume.

After the race, I was patrolling the pits, and the Monster Energy Kawasaki dudes wanted to talk about the presser. The Kawi guys had become huge Jason Anderson fans since he rebuffed some of Blake Baggett’s bold comments. They were happy because they had won the race, too. But they said they had not been able to hear everything that was said, due to the low volume, and all the background noise. “I couldn’t even hear what the riders were saying,” said Mike Williamson.

Yeah. I know the feeling.