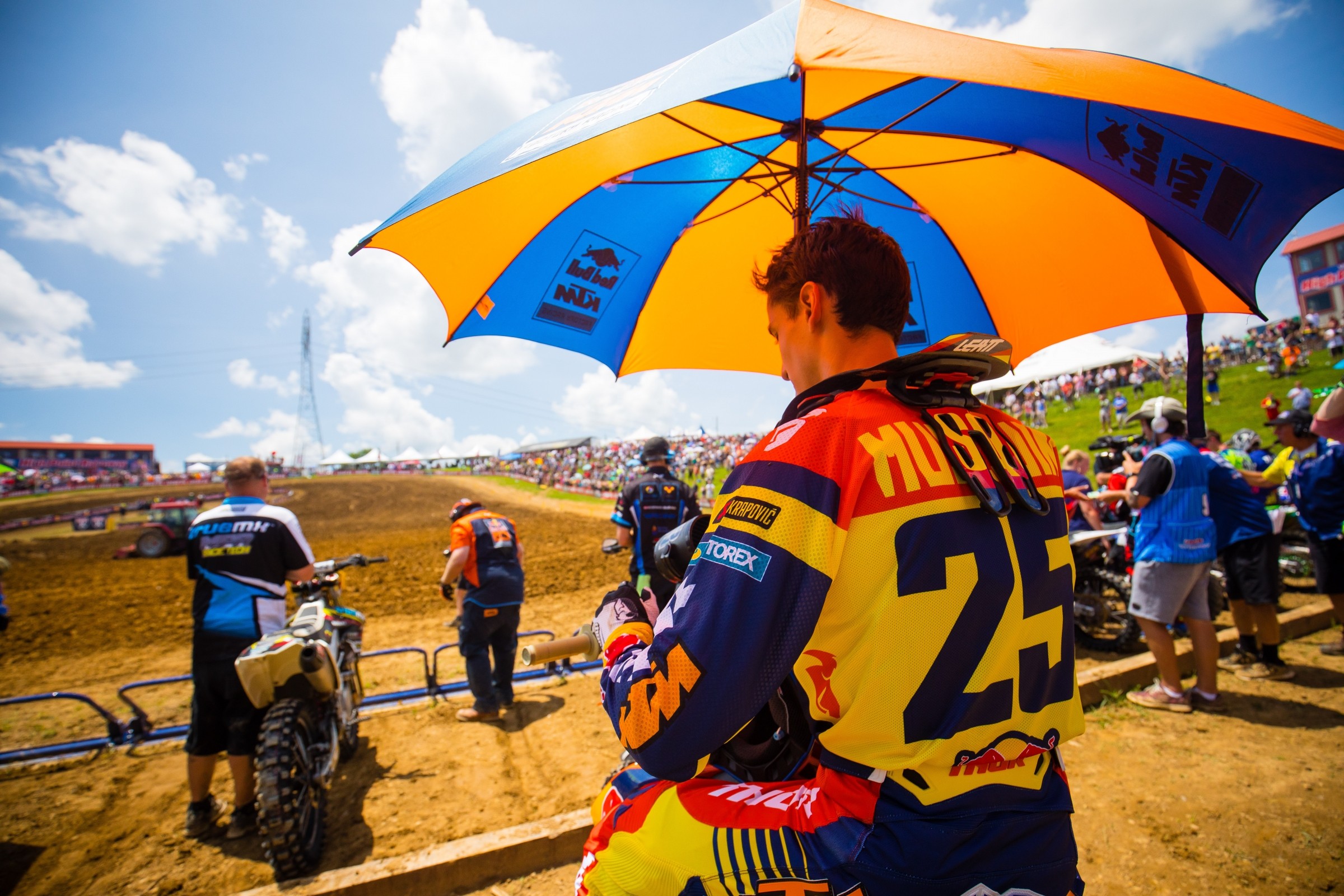 3 on 3 Questions for Muddy Creek

1.) What do you think of Blake Baggett's bold words as of late?

David Pingree: Blake was a little spicy on the mic after his Thunder Valley and High Point rides. The thing with Baggett is that he has always had a very straight-forward way of looking at things and he speaks the same way. He admitted in a recent interview that you have to be a little bit cocky if you want to win. I think Ryan Dungey and his truck load of titles would disagree, but that’s neither here nor there. Confidence is the magic ingredient at this level and it reacts differently with different riders. It is typical for a rider to seem cocky when they first start winning. Once they get some backlash for acting like a dick they tone it down, in public at least. Blake is saying the things that he thinks he needs to hear himself say right now, if that makes any sense. Some of his rhetoric about not caring about what Eli’s dad has done is just to reaffirm that Tomac is human and beatable. He needs to believe that if he wants to win this title. And I believe that is a very real possibility.

Steve Matthes: I probably wouldn't have said them when Eli Tomac can look up at the 450SX/MX scoreboard and it says "A ton of SX and MX wins" for Eli and "two" for Baggett but hey, that's just me. The last time they raced in 250MX in 2012, yes Blake Baggett got the title over Eli Tomac but in the 12 race series, Blake beat him six times on the way to the title and Tomac beat him, you guessed it, six times. But whatever, I don't have a dog in this fight, so it's great. I’ve heard Eli was a bit tired from a gnarly workout before Thunder Valley, and at High Point we didn’t see them get out 1-2 so we don’t know what is going to happen when they start together. Each guy has made some mistakes this year but the battle is coming and when it does, it will be great. I'm not sure what Tomac and his "famous" father have done to Baggett along the line but fire up the popcorn, I'll be watching.

Jason Thomas: I think we are seeing Baggett back at his peak confidence. We haven't really seen this version of him since his title winning season of 2012. It has been a bumpy road since then and we haven't heard a whole lot from him in recent years. More than anything, I think we are just getting a look at how he truly sees the landscape when he is at 100 percent. I don't think he is intimidated by Tomac outdoors when things are clicking but to be fair, Eli has had the upper hand for a long while now. I think we are hearing Blake's inner thoughts vocalized and in a world where everyone is scared to say anything controversial, I think it's a welcome change. Whether it's wise to do so is debatable and I have no idea whether or not he is right or wrong in his opinions. We will learn that truth as the summer grows long. For a pure entertainment factor, though, this is spectacular fun.

2.) What's it going to be like for Musquin over the next eight rounds? (Due to his KNEE INJURY.)

Ping: Well, since I just had surgery three weeks ago to remove some torn meniscus I can speak to this with some experience. I also have three ACL replacements to my credit, so, if knee injuries were championships I might be headed to the Hall of Fame. Anyway, the short version is that it’s going to be painful and frustrating for Marv. Depending on the location and severity of the injury, your knee simply doesn’t work the way it’s supposed to. Clicking, popping, tenderness, and sharp pain are all very common symptoms with a torn meniscus. The worst part as a racer is that you lose confidence entering turns and in ruts. You are constantly thinking about keeping your foot from getting caught in a rut or twisting in a turn. Those distractions aren’t conducive to good results on the weekend. I haven’t heard how severe his injury is, but it could mean an early end to his summer if it’s bad. If it is more of a contusion he could be 100 percent in a few weeks.

Matthes: Well, he hurt his meniscus on Thursday before the race according to people I spoke with so it's was as tender as it's going to be at High Point. In theory, it should be a bit better for this weekend but with a meniscus it's always going to be there floating around in your knee and causing pain. Sometimes, it causes your knee to lock up even. Marv's second moto was okay, maybe he can do that again and salvage some points then on the next break, go in and get it clipped out. However if he does poorly this weekend (on a track he's normally very good at) then I bet he misses a race or two while he gets it fixed.

JT: Meniscus tears are no fun. I’ve done this to each knee and it's all about pain in most cases. Functionally, he could be okay if it doesn't "catch" during extension. In that scenario, he is just going to deal with a lot of pain and how that translates to results, we will have to wait and see. The untimely part was that this injury happened on Thursday before High Point, leaving no time to react. He was surely still dealing with inflammation and the recoil of an injury as the gate dropped on Saturday. Had this happened on Monday after Thunder Valley, he would have had an outside chance to have his meniscus surgically trimmed and still made the gate last Saturday. It would have been a quick turnaround, painful, and ill-advised, but that's nothing new for moto. Losing those 10 days of downtime was a tough blow as he faced four races in a row entering High Point. Where he goes from here will be a week-by-week ordeal. Meniscus injuries don't heal on their own, but he might be able to manage the pain if he can get the inflammation down and heavily tapes it. The big problem, though, is that just because he can race doesn't mean he can compete with Tomac or Baggett if he isn't 100 percent. Riding without extending one of your legs basically eliminates the potential for him to win I would assume. He suffered through a 16-6 score at High Point but that kind of result isn't going to win a title. If he is only able to muster top-10 results, don't be surprised to see him headed to the operating room sooner than later.

Ping: I certainly wouldn’t count him out. Webb has had a very inconsistent year, but he’s been very good at times. He seems to be coming on lately and if he can continue to build momentum I could definitely see him win one. As far as the 2018 bike goes, I think it’s premature to suggest that it would help him win. Nobody has ridden it yet! Either way, I think Coop has a win in him.

Matthes: Well, I'm not sure. Sorry, man, I can't decide. He's been better lately, right? We've seen in the past, with Grant Langston and Ryan Villopoto, a new bike can help a rider out but with Webb we’re specifically asking about a win and when I see how fast Baggett, Tomac, and Jason Anderson are going, for example, I'm thinking eeeehhhhh. Podiums, though? Yes, I'll take that for Cooper ONCE he gets the 2018.

JT: According to Ken Roczen on Instagram, this is not going to happen. I am a bit more optimistic, though. I don't think he is going to string wins together, but there is opportunity at the top. With Anderson and Musquin both winning their first 450 motos this season, why wouldn't we think it's possible? Dean Ferris came in and almost won the first moto at High Point, too! Tomac and Baggett are setting the pace out front but they are beatable on a given day. It seems that Muddy Creek has been the catalyst for Webb each year so maybe he takes a big step forward on Saturday. I don't know if he will win this year, but it's absolutely possible.