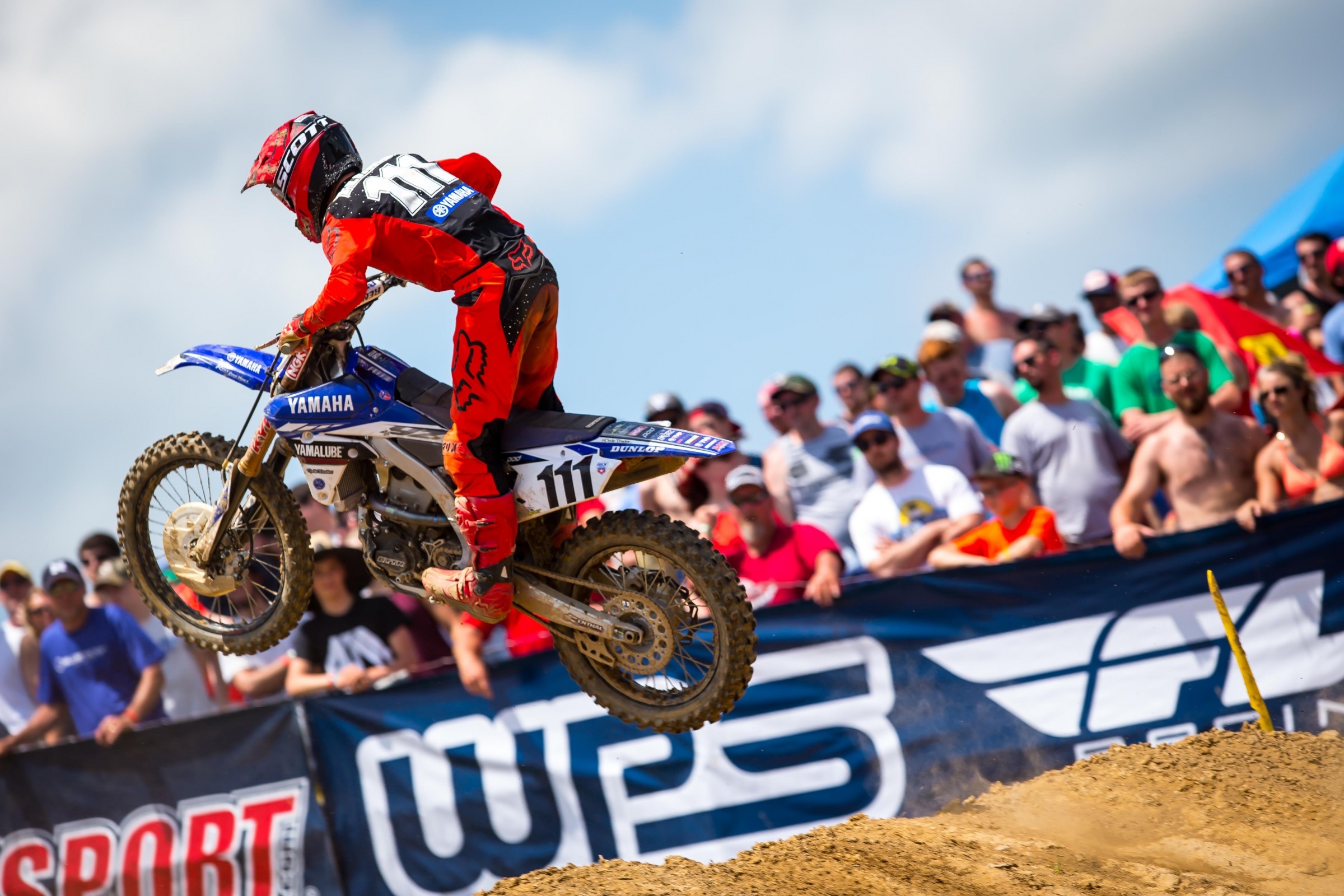 Racer X: Nice qualifying. First moto was great, but honestly that second moto was fantastic too. You were down for a long time. You had to be pretty excited about coming through the pack.
Dean Ferris: Yeah. I went down in the second corner. I had a lot of momentum, a lot of speed, and I was coming through. Then I had another crash like five laps later. Just kind of hit a guy in a rut. Then the momentum was kind of gone. In all honestly, I was spent after moto one because it’s winter in Australia right now, so coming here, this hot race, it was hard. At that point I wanted to come home safe, and all those things. I have a championship back home.

Second place though first moto, you had to have been stoked with that. Riding pretty well and pulling away from guys. It was a really, really great ride.
It was good. I got in the lead, so that was pretty cool.  [Blake] Baggett come through. He was riding good, taking a lot of risky lines that I didn’t want to do today. But yeah, I put it in and I pulled away from some guys behind me. But the last laps are hard. It’s been cold at home. Really happy with it, definitely.

Did you surprise yourself a little bit?
Not in my riding. I’ve been riding good all year and I just rode like I was riding and even a little bit slower in the end because I got tired. I didn’t want to come in and say I’m going to do this or do that. I really wanted to do well. Big smile on my face after moto one.

I didn’t realize when you were here for KTM you never rode any outdoors. I didn’t even think about that.
So, what happened is a spot came up in Europe on the factory Husqvarna to fill in for [Tyla] Rattray. Roger Decoster said, “Look, man, we’re happy to have you,” and I was ready to go for the outdoors. It was halfway through the championship. He goes, “But this is there if you want to go back to Grand Prix.” I took that option.

What about the track itself? What’d you think of it?
It was awesome. We don’t have anything this scale in Australia. It was cool. We came here for press day. It was just awesome. It’s huge. Rutted, rough, technical. It was cool.

How close is your bike: what did you bring over? How close was your bike to what you ride with Craig [Dack, in Australia]?
We brought almost everything. Just not the wheels and not a tank, but that’s it. That’s what I race in Australia. It’s production-based. No titanium or anything. Bu we’ve got factory suspension. Dunlop supported us here. So, it felt like my bike at home.

So it was really no adaption for you at all?
No.

We keep seeing you pop up with these rides, whether it’s Motocross des Nations, whether it’s GPs or here. Everyone’s like, Dean Ferris is really fast.
Yeah. That is cool to hear people say that. I went home to Australia for a couple years because I wanted to ride for CDR Yamaha, really solid, well-cast solid team. I knew that I could rebuild myself pretty much, because I had a couple of mediocre years, I reckon. I won the championship last year. I’m leading this year—actually dominating. I built myself back up with the team and CDR has helped me do that. Now it’s time for me to spread my wings. Ideally I’d like to come back here next year and race the AMA. That’s what this was all about, just to see where I’m at as well. I was at the front, so I was stoked.

No doubt. The track looked brutal that second moto, man.
Yeah, it was. It’s rough. All the tracks are rough here.

We prep them exactly the same. We put sawdust down, then we rip it and it’s the same thing.
That’s cool. I like it.

Racer X: We’ve been waiting to see you ride. Nice second moto. What’d you think of your day overall?
Chase Sexton: First moto wasn’t what I wanted. I went down with A-Mart in the first turn and I couldn’t get up. I was probably 30 seconds behind everybody else. I was probably 16th or something and I fell over and I ended up 19th. Then second moto was better. I think I started off 16th or something and came to 10th, so it’s all right. I want to be top 10. I think I can be there for sure. I just have to get the starts and be up there.

What was the biggest surprise for you today?
Biggest surprise was probably I wasn’t surprised with the speed. I think my speed’s fine. The starts, it’s chaos in the first couple of laps. Probably the first turn and the second turn. They go for it, for sure. I just got to learn that. I haven’t raced in eight months or something, so it just feels nice to race and get a race in.

How frustrating has it been for you? We’ve kind of been waiting and waiting for you to debut. These guys [team] have, too. I imagine you’ve been so depressed probably at times.
Yeah. After Atlanta when I crashed in practice I was pretty bummed for a while. I think all of that honestly has made me stronger. I think this is good. I feel good on the bike. I’ve been riding for two months. I think we’ll build from here and be better every weekend. So, that’s my goal.

I think we’ll see you in top 10 both motos in not too long.
Yeah, that’s my goal, top 10 next weekend both motos. I think with a good start I could do that pretty comfortably.

Welcome to the pros. Laying on the ground in the second turn!
Yeah. It’s chaos those first couple turns. Hopefully Tennessee will be a little better.

Racer X: I didn’t even know this until right now—you were on a 350?
Ryan Sipes: Yeah. I have a 450 at home, but I race the 350 mainly. I’m only doing one this year and didn’t really train a lot for it. But I figured I’d have more fun on my 350 and I’m more used to it. I knew I’d get smoked on the start. It actually wasn’t that bad. I was top 15 both times. First moto first turn somebody slid broadside and I had to stop. Second moto Ferris went down in front of me in the second corner. So, it ended up not the best of starts but I had fun. I’m not mad where I finished for what preparation I did for it.

It seemed like you were between 13th and 16th all moto long, both motos, and no dropping off as far as your fitness or anything. So, you’ve got to take that.
Yeah, it was all right. The intensity of moto, I’m losing that fitness now because I do GNCC. We don’t ever ride that hard. We do, but in the woods you can only ride so hard. You never get the heart rates that you do here. So, I’m losing a little bit of that. But as long as I can keep finishing right around top 10, top 20 I’ll keep coming out here. It’s fun for me. Kind of back to my roots and get out there and have some fun.

Did you think there was anywhere the 350 worked better than the guys you were racing against?
For me, just being that I ride it all the time. I never really ride a 450. I think it was easier for me in the really rough stuff. The ruts were gnarly out there. Keeping it in the ruts and not getting squirrelly and stuff. I think probably better in the middle of the track some tight stuff I think maybe the 350 was a little better. But definitely not as good on the start and on some of the hills.

You’ve ridden High Point 8,000 times. What’d you think of the new design?
I like it better than two years ago, which was the last time I raced here. I still think I like the design before that a little bit better, but this one’s not bad. The two tight corners that I thought were going to be pretty one-lined they still were a little, but not as bad as I thought. I think it’s better than it was. It’s not bad.