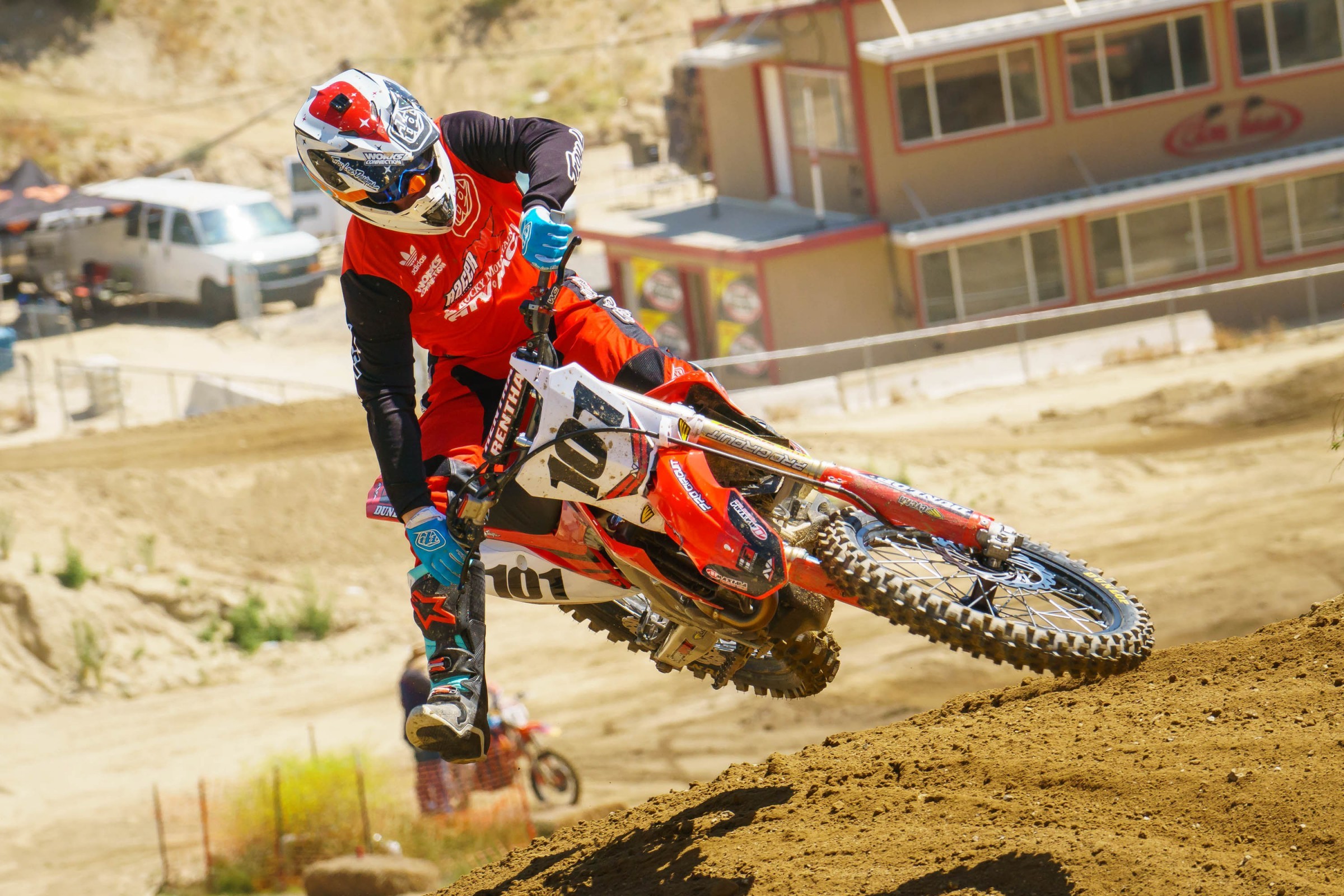 Big fan of your humour, specifically the complaint image last week. Hopefully this one can cut the mustard to be a feature for Ask Ping next week. I understand that writers, just like fans, have the riders they cheer for and want to see succeed. However, there is one thing I have come to notice about Jason Weigandt’s (and a few other writers) take on Eli Tomac.

It seems to me that there is this notion that Eli Tomac didn't get the win in the first moto at Glen Helen because he was backing it down and bringing it home for points rather than going all out. As was written in Racerhead last Friday he "settled" for second, pulling a Dungey as some would say and bringing it home safe (which I think is BS but that’s for another rant). Almost as if he didn't win because he didn't want to… Seems a little bit fanboyish to me.

Another side was the Vegas supercross. It seemed they couldn't conceive that Dungey, whenever he got passed, may not have wanted to even try and check out. It was just look how easy Tomac can pass Dungey. Dungey knew being close to Tomac meant a championship. Why try to push it when you get by and make a quick mistake when the heart rate is elevated?

Anyways I could find more instances but I value my time unlike some keyboard warriors. Your thoughts?

I can see where you would pick up on some favoritism toward Tomac in the past six months, given his results near the end of supercross. Let’s face it: Eli was easily the quickest rider from Phoenix to Vegas, with the strange exception of New Jersey where he struggled. Tomac has shown flashes of blazing speed outdoors so many folks, myself included, expected him to absolutely dominate this summer. So far he has been met with crashes, mechanicals, and riders like Marvin Musquin and Blake Baggett who are riding great, and he finds himself down in the points once again. For better or worse, announcers and pundits don’t take races one at a time—we like to look at trends as the year progresses and draw conclusions about what is likely to happen. We’re like weather forecasters and, just like those overpaid kooks, we’re wrong pretty often. In Weege’s defense, Tomac seemed to be able to pass Dungey at will in Las Vegas. However, Eli has only won two motos out of six since the Nationals started. Maybe we all got it wrong and this summer will be a fight to the finish in Indiana. And maybe Phoenix will have the wettest summer on record with flooding in the streets all summer. If those things don’t happen, I’m blaming Weege.

I caught a pretty funny line coming from Grant Langston during the GH moto.  I wonder if many people got it.  As we all can imagine and (you know) the debate regarding who has the “trick” parts on a race team has gone on forever. Now obviously if the availability of the “Factory” parts is limited it would be the team manager’s job to get the sweetest stuff to the guy with the best chance of putting them to use  (i.e. winning). You obviously know Mitch Payton better than most of us out here so tell us straight… On Mitch’s team does everyone have the trickest parts available and essentially the same bikes?  The line that made me think of all this was after three of four Pro Circuit bikes broke on Saturday at Glen Helen, Grant said, “Well, at least they all know they are getting the same parts.” Dang funny to me for some reason.

As GL knows, there are times when a team will develop a part/piece that is better and until they have enough for everybody, the rider most likely to win a title will get it. That happens and has happened for as long as I’ve been around. I remember when Mike Hooker, our engine development manager, would build a new cone pipe that worked really well. Those things took a full day to weld up and build so depending on the day of the week we tested it, only one rider got to use it. In different seasons I was the guy with the good stuff and the guy not getting the good stuff. It is what it is. When you can’t manage a top-five finish outdoors and you spend the entire race day battling with three digit local riders it’s tough to argue that a set of magnesium hubs would help you win. Man, the summer of 1995 was rough for me. It’s been a while since Monster Energy/Pro Circuit Kawasaki has had a day with multiple meltdowns like they did at Glen Helen and while Grant may have been making jokes in the booth, we all know the poop was hitting the fan under the team awning. Mitch likes losing almost as much as getting a colonoscopy by a large-fingered man. And losing is like a Quinceanera with pinatas and Chupa Chups compared to blowing up three bikes in one weekend. I would say the pizza party after Thunder Valley would ease the pain, but I’m pretty sure they smoked another motor there. Stay strong, Pro Circuit employees … daddy isn’t mad at you, he just had a hard day at work.

Why is the TV package for pro motocross the worst in pro sports? How can we get all the SX races for 18-19 weeks straight with Fox, then mx comes around and first moto are on a channel 1/4 of the country doesn't get(mavtv), and if you do want to see all motos, it's 50 bucks for a app? I do understand moto seems longer than SX, but not really.... whoever came up with the 2 channel thing needs fired..... In this modern day with social media and internet, why not put it on TV too? Just doesn't make sense to loyal fans. Then they wonder why they can't land outside the industry sponsors, who's gonna shell out millions to sponsor a bike or team the may or may not be on TV. I know MX might not have the wow factor of supercross, but there are fans out here and not knowing if the race is going to be on, on Saturday, Sunday, or 4am on Tuesday is a bit frustrating to the regular fans. Thanks for your time, keep up the good work.

There are some real issues with televising Lucas Oil Pro Motocross that not all folks realize. First of all, a four-hour schedule, with four individual races, all counting as championship motos, makes it hard to fit on one network. Even NFL games are only three hours long. So, in order to show all four motos, MX Sports got creative and split it up between two networks, the first of which is owned by Lucas Oil, and the second, NBCSN, is the series production partner. I know it’s a pain in the butt to have to switch the channel in-between some motos, and not everyone gets MAVTV, and not everyone wants to pay $50 to see it all commercial-free, and, God forbid we have to simply check our local listings.  The bottom line is they either make the extra effort or cut it down to one moto. They chose to make to make the extra effort.

Also, supercross has the advantage of running in the winter when there are fewer sports to compete with. During the winter, most motorsports and traditional sports are in the off-season, so a three-hour Saturday night block at 7 p.m. in January isn’t so hard to find. By contrast, starting in May and June, nearly every motorsport is running full-steam, as is baseball, and the NBA and NHL playoffs. You can look at NBCSN’s programming, for example. During the summer the network covers NASCAR, IndyCar, Formula One and the Tour de France (as well as the Summer Olympics every four years) with each often racing or qualifying at the same time. It would be nearly impossible to convince any top-tier network to give motocross a four-hour live block every Saturday against all of that competition for time slots. Fox Sports 1 also covers NASCAR, but that season doesn’t start until mid-February, and there aren’t many Saturday night races until late in the year when the weather gets warmer. Weekends in the summer are jam packed with motorsports, and motocross is just part of the mix.

And while we are past the days of having to pay networks to put motorcycle racing on the air, our sport is still down a ways on the priority list. So, while it isn’t perfect, the current setup is better than it’s ever been. Those committed to watching the races will make it work. Between live streaming, television, and social media you can damn near get roosted from the comfort of your couch.