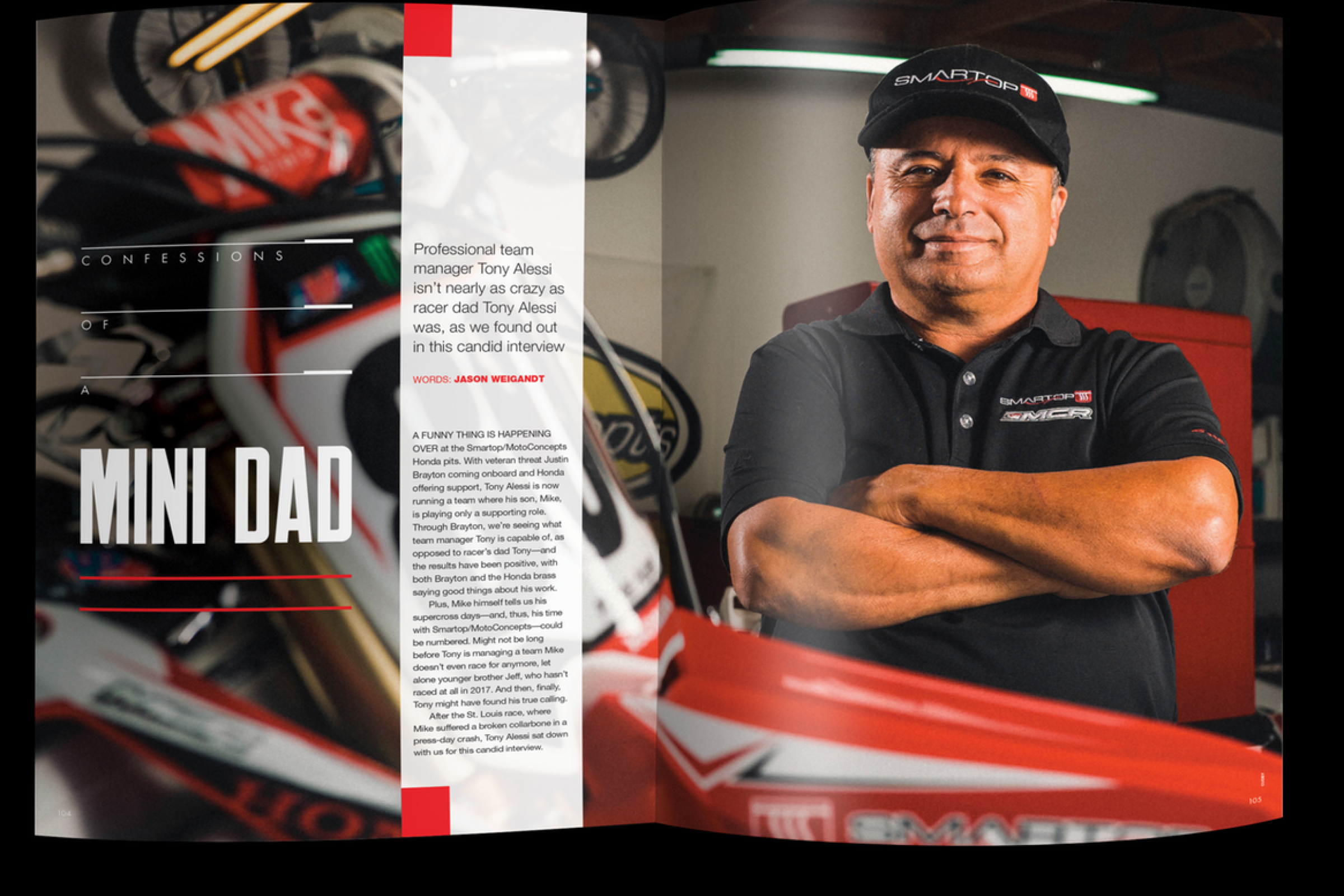 In the Mag, Confessions of a Mini Dad

Jason Weigandt’s “Mini Dad” story ran in the July issue of Racer X Illustrated. Subscribe today to read the full feature and for in-depth stories about the Rockstar Energy Husqvarna team, the 1984 Supercross Season, and more. Here's Weege to tell you how his story came together.

When the 2016 off-season began in earnest, it was easy to count the number of available rides, and available riders, and realize the numbers didn’t match. Someone was going to be left off of a factory team for 2017.

Tough situation for the riders, but a great one for an opportunistic private team like Smartop/MotoConcepts Racing (MCR). Long in the search for respect and support in the pro pits, the Mike Genova-owned team was poised to make a splash. It added Justin Brayton to its usual lineup of Mike Alessi and Vince Friese. With Brayton came support from Honda, which wanted another test bed for its brand-new 2017 CRF450R. Also, with Brayton and Honda, though, came scrutiny. Brayton had ridden a variety of factory bikes on factory teams. He knows how a team should operate. So everyone started waiting. When would Brayton or someone at Honda start bagging on the team?

That still hasn’t happened. Conversations throughout the year with Brayton, in fact, only further supported the team. Specifically, Brayton heaped praise on team manager Tony Alessi. He said Tony was hard working, low drama, and great to work with.

So I started going to the source. Over the course of a few weeks, I chatted with Tony during each supercross track walk. What I began to realize is that as he and his son Mike begin to separate, Tony is also beginning to find a comfortable place within the industry. As a moto dad, he always tried too hard and came on too strong. But Mike is getting on in his racing years, and MotoConcepts is no longer Team Alessi. The MCR goal, now, is to become a Honda 450 B team, more like Team Brayton or Team Honda 2.

It’s in that role that Tony is finding himself the perfect fit. Of all the things said about him, no one has ever doubted his work ethic, his dedication, or his love of the sport. Now that he’s beginning to see what life can be like when you remove family drama from racing, everything is changing.

A few weeks back, I finally interviewed Tony about all these subjects, and his answers were startling. Here’s Tony, who tried harder than any amateur moto dad every tried, admitting he made mistakes along the way, and wishing he would have done things differently. Perspective has a funny way of providing clarity. In this interview, Tony makes it all clear.

You can read the full story about Tony in the newest issue of Racer X Illustrated available now.