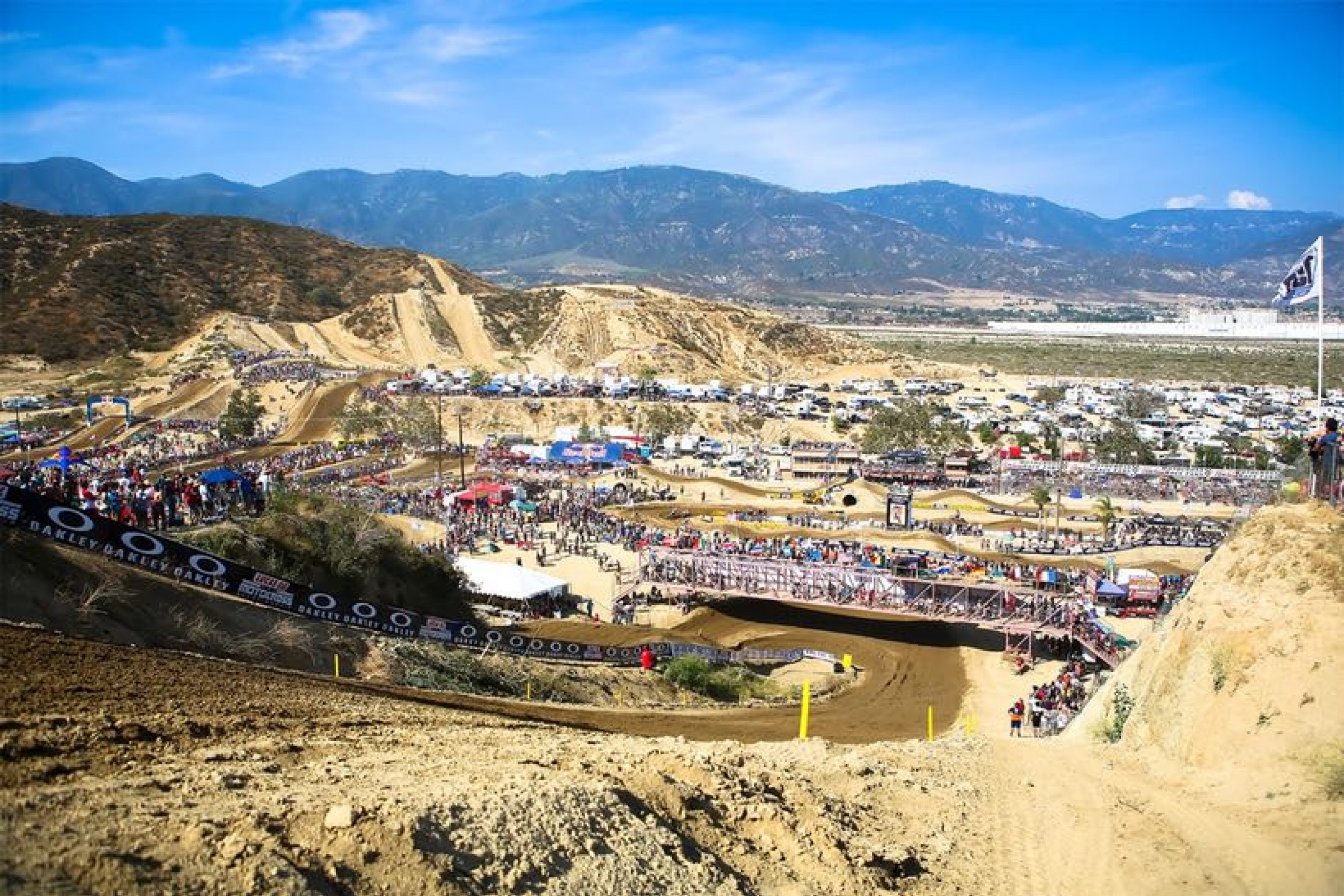 Glen Helen is round two and serves as a home race for most of the racing world. While several of the riders will move east for the summer, Glen Helen is still the home of testing and preparation during the months of April and May. Every Thursday morning, the racing elite will make the trek north to San Bernardino for moto galore. While the track may be a bit different on national weekend, the overall feel is the same. From lap one until the checkered flag flies, riders will feel more at home at Glen Helen than any other track on the circuit.

Glen Helen is located about an hour northeast of L.A., set in the sprawling suburbs of San Bernardino County. It’s the on the northern precipice of the 215 freeway and going further north on the 15 will take you into the high desert. It butts up against the mountains to the north and that means one thing—smog. As the air pushes out of L.A., it often gets trapped by the mountains and sits ominously over the Glen Helen area. As summer heats up, this can be a nasty variable for this track, but luckily this weekend is calling for sub 80-degree temperatures. I’ve raced Glen Helen at 100-plus degrees and everyone suffers, but 2017 looks to be dodging that bullet. As temps will be lower, I look for many of those DNFs at Hangtown to disappear. There won’t be as many riders pulling off simply because they can’t continue. It won’t really matter for the leaders, but it should make for better and more intense racing throughout the field.

Glen Helen’s track is always demanding. Jody Weisel waves his wand over the course and turns the difficulty up to an 11. I have broken multiple wheels due to the massive jumps that Glen Helen presents, so this weekend could have an impact on title implications. Last year’s course had a particularly nasty set of whoops that riders definitely didn’t appreciate, as well as a huge uphill triple that was a bit much in my opinion. I don’t expect to see those return for 2017 but make no mistake, Glen Helen will always have some of the most death defying obstacles on the calendar. The uphill triple in the back section pushes 70 MPH, the start is the fastest of the year, the hills are the steepest of the season, and there is even a straightaway that is intentionally flooded to create ruts. Glen Helen is truly a track of extremes.

For the fans, Glen Helen is the moto mecca of Southern California. The majority of the moto industry is based within an hour of the track and almost every rider who has ever been to California will make the jaunt up to San Bernardino. It’s an iconic venue that Californians hold dearly.

Is this the new normal for Zach Osborne?

Can Josh Grant steal a moto win at his home track?

Will Blake Baggett bounce back from a challenging opening weekend?

Who will have the big crash, or near crash, down Mount Saint Helens?  There’s always one.

With mild temperatures, will the results vary from Hangtown’s heat wave?

Zach Osborne was a title contender coming into Hangtown. We all knew that. Running away with 1-1 moto finishes was a big statement, though.

Eli Tomac is a runaway train for this 450 title. He won’t win every moto, but he will dominate the majority.

Josh Grant gave a strong performance at Hangtown. If he was a little stronger, he could have won that second moto. Either way, he was on the podium and has two of his best tracks ahead of him.

Adam Cianciarulo had a tough second moto, but he proved he has the speed to be a podium guy. He will win a moto or three this year.

Alex Martin’s moto scores may have only been 4-4, but that was good for second overall. “Troll” is solid and super fit, making Hangtown a perfect race for him. He will be around the box all summer.

Jason Anderson’s results may not have shown it but he was very, very fast at Hangtown. He will be up front soon.

Dylan Ferrandis was picked by many to be a front-runner for this championship. His crash in the first moto gave him zero points on the day and left him in doubt for Glen Helen.

Shane McElrath was expected to be well inside the top 10, but struggled at round one. He is typically fast at Glen Helen so look for a bounce back ride.

Joey Savatgy grabbed a great start in moto one, but was unable to hold on to the leaders. He’s had a rough few weeks and after going 1-1 at Hangtown last year, he is looking for anything to regain his mojo.

Steve Matthes is fired from MXA after a verbal showdown with the Glen Helen staff.

Monster Energy/Pro Circuit Kawasaki has three riders inside the top five on lap one of the first moto.

Blake Baggett puts his KTM inside the top five overall.

Jason Weigandt goes all in, eating a four course meal during 450 moto two.

Someone complains that two dollars a moto is too expensive for commercial free racing.