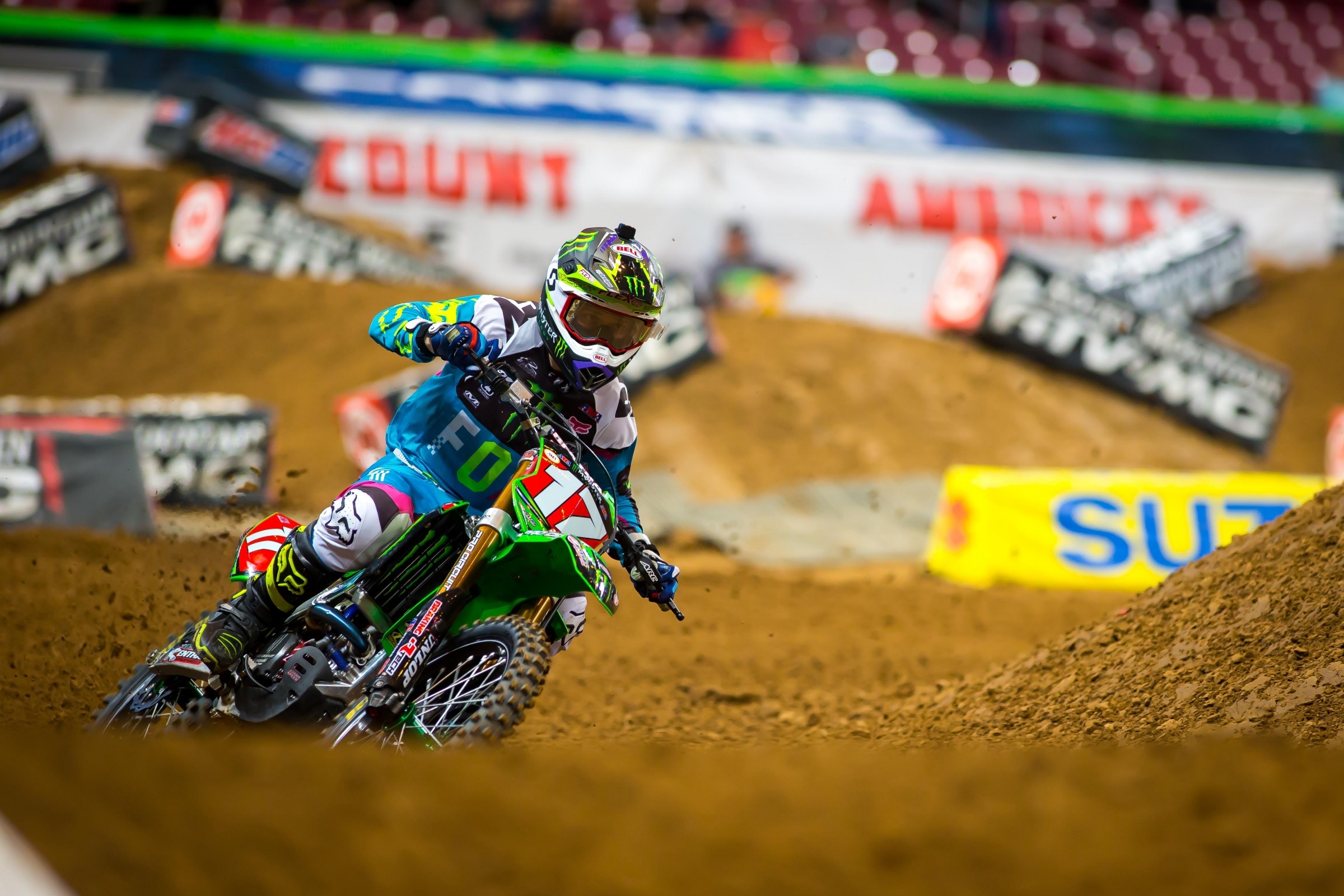 3 on 3 Questions After SLC

Steve Matthes: Yeah, it was all-time great for sure. It was very Stew-ish to be honest. You literally held your breath as he was out there because the speed he was going seemed to be just too fast for the track, for the bike, for the competition (as in, he might rear-end them) and for gravity. The ability of Eli to grab traction while leaned over and on the gas was amazing. I watched him the whole time, I couldn't take my eyes off him ripping through the pack. It was chilling. I'm serious. Wow.

David Pingree: It reminded me of something you would see Damon Bradshaw or Jeremy McGrath or James Stewart do. I was actually excited because I thought there was no way he would catch Dungey and it would set up a great final two rounds. And then … he just kept coming. Eli has found that next level that very few riders get to, like motocross Zen, or something. Eli has achieved the highest level of enlightenment and, much like the great Carl Spackler, he will receive total consciousness on his death bed. So, you know, he has that going for him. Tomac actually found this mojo in Lucas Oil Pro Motocross several years back but when he snapped his wings into that Colorado rut, he lost it. But it’s back and it’s unreal to watch. I don’t see this title going to any other rider even though one other guy has a mathematical chance.

Jason Thomas: I hesitate to say greatest ever because I hate being a victim of the moment, but it was fantastic by any measure. As Matthes said, Stew put in rides that mirrored this level of superiority back in his prime. The 2007 Indianapolis Supercross was most reminiscent as Stew figured out a rhythm section before anyone else and used it in an epic comeback. Reed jumped out front a la Dungey, but Stew's speed in that one section was overwhelming, just like Tomac's speed in the whoops on Saturday. Regardless of any comparisons or opinions, there is no denying that Eli created an instant classic on Saturday.

2.) Back to the East Region. Who you got for this title now?

Matthes: Yeah, I think Savatgy does enough to hold onto this thing. He's just got the one win, but the weeks off probably helped him reset and everything's back to zero now with no momentum for any rider. I think Joey's got past experience of title hunts to help him and I think he'll do enough to hold on and win this thing. Jordon Smith though ... he's been something else on that east side, as has Zacho. Great series, right?

Pingree: I’d like to see Jordon Smith win this thing. He’s been incredibly consistent this year and with a couple big wins he finds himself in his first title fight. I think this championship is going to come down to the finale in Las Vegas and with both coasts banging bars for points there could be some big swings in the standings. The key is going to be to stay in the hunt and keep it close through East Rutherford so you have a chance in Vegas. Osborne has to win and Savatgy needs to stay off the ground. This will be fun to watch.

Thomas: I have been all over the map with this series, starting with Savatgy as my favorite but then switching to Osborne. Zacho was just so much faster than anyone else that I assumed he would do enough winning to offset any mistakes. His crash in Daytona coupled with a front end problem at Detroit [due to a first turn crash] have completely changed the 250SX East Region landscape, though. Savatgy has two rounds to manage here and seeing as he won Las Vegas last year, I think he has to be the odds on favorite. I have Osborne snagging a win this weekend but in the end, it won't be enough to overcome the issues he had a few weeks ago.

3.) 250SX eligibility rules have been changed. Your thoughts?

Matthes: Well, to put it bluntly, it's garbage. It's like being half-pregnant. As I've written before on this site, the 250SX Class needs to figure out what it wants to be because right now, the rules for advancing are a joke. Make this class just like 250MX and let anyone race it for as long as they want, or get these guys out of here and open rides up for the kids that need them. As it is right now, succeeding in the 250SX Class is the worst thing you can do for your career, so the guys definitely don't want to do that. All they've done with the rules is push things off without having any balls to make a decision about the future of the class. You get to defend a title and you now need four years of 135 points instead of three. All you did was push the same situation one year further down the road. Yay for the 250SX lifers, they win again!

And on top of all this, you get national number points for it! Yup, race half the competition—because it’s split into coasts-but get the same points for your number that a 450 dude gets. So, just to hammer home the fact that you can continue to be an underachiever in the class every year and make tons of money for not winning, you ACTUALLY get a lower national number! Ping's gonna love it, him and Barry Carsten see no problem with all of this I'm sure.

Ping: Yup, I think this is a good move. There are only so many rides open in the 450 class and forcing guys out prematurely only puts them out of a job. Last year the East Region Champion couldn’t find a ride; that’s an indicator that they are pushing riders out too quickly. You have to trust that riders will move up when given a chance; that’s the goal of every good rider. The 250 class is still a good place to learn, but it often provides some of the best racing. The promoters and the manufacturers shouldn’t be punished for the value that those riders have. This is a good move.

Thomas: I don't think it's that big of a deal. Looking at the list of jobs and riders available, I think the timing is good if this change was inevitable. Last year saw riders like Dean Wilson, Malcolm Stewart, Jake Weimer, and others without a solid ride, and adding two to three more 250 riders to the mix certainly won't help. With the longevity we are seeing out the 450 riders these days, we can't just pour more 250 riders into the mix without reaching an unsustainable level. The 250 class has long been a class that has seen several riders leave after winning back-to-back titles (McGrath, Swink, Huffman, Tedesco, etc) so to think there is some necessary push to get these riders to the 450 class seems short sighted. The 250 class is in a good place with a mix of veterans and kids and the 450 class has more riders than it does jobs. I am good with keeping the rule the same or changing it, too. I don't think it changes too much in the big picture, long term anyway. I definitely don't think it will really change things enough to call it garbage.