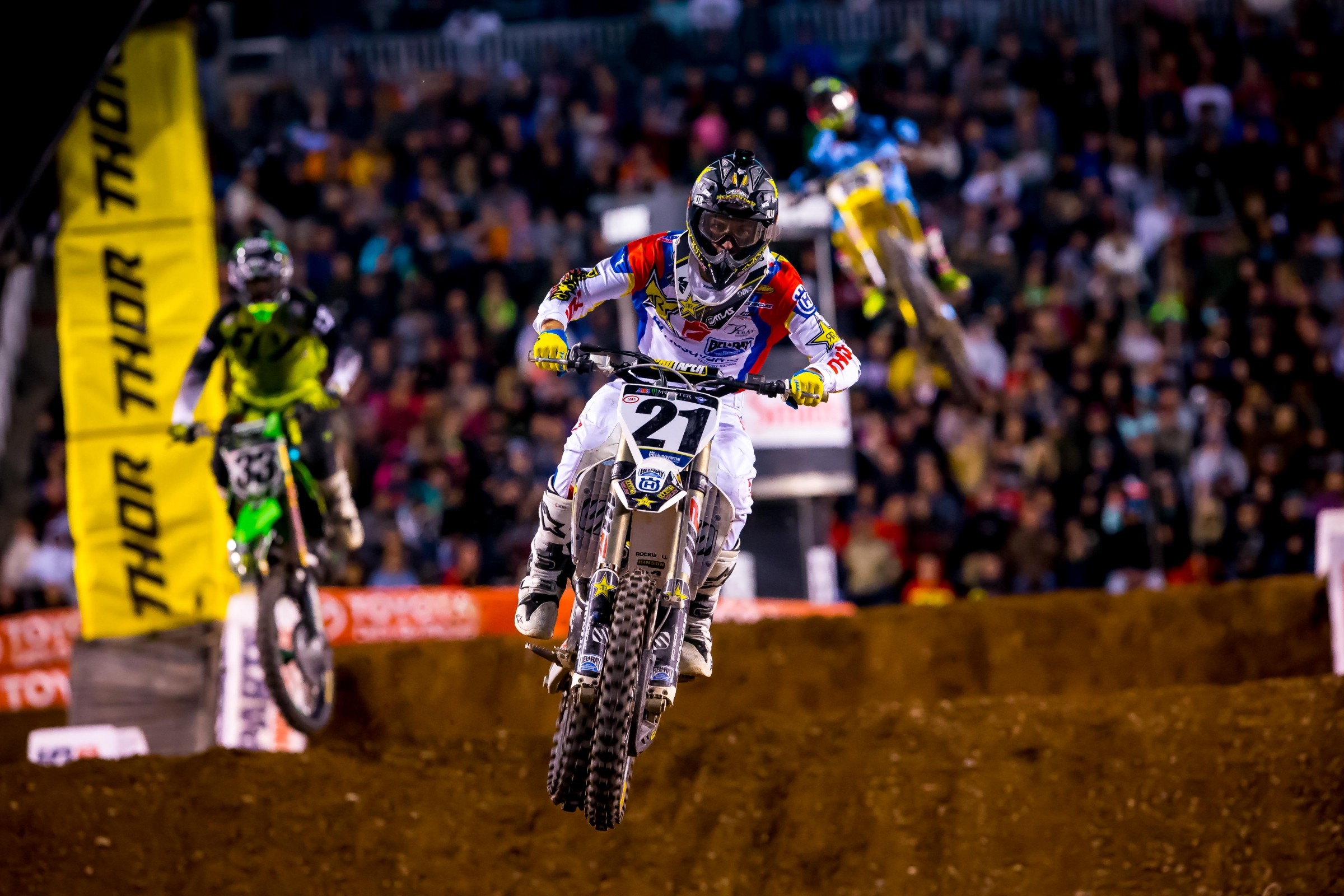 In his second 450SX season, Red Bull KTM’s Marvin Musquin has put together a remarkably consistent season, easing any concerns that he can be a title contender in the future. Musquin is currently third behind Eli Tomac and Ryan Dungey in laps led with 49; he’s third in average finish with a 4.9 (Tomac is at 3.1; Dungey at 2.5); and is tied with Dungey and Ken Roczen for second with two wins (Tomac has nine). After recovering from an illness prior to Indianapolis, Musquin has gone 2-2-3-1-4 over the last five rounds (for an average finish of 2.4, bettered only by Tomac’s incredible 1.2 average finish in that span; Dungey is at 2.8). No matter what Ryan Dungey decides—no official announcement has been made—after the season, KTM should be in good hands with the Frenchman.

“I was struggling with my starts in the heat race and in the main event,” Musquin said about his fourth on Saturday in a KTM press release. “I had a really bad start in the main and it put me in a really bad position but we put our head down and came back to fourth place, which is good on a track like that. With the conditions that aren’t my favorite—hard-packed and slippery—I was able to make some good passes and showed good speed so I’m happy with my riding.”

Rockstar Energy Husqvarna’s Jason Anderson finished third on Saturday night, but did not show up to the post-race press conference. We asked someone close to the team, and they said Anderson tries to get in and out of high altitude (Salt Lake City is at an average elevation of 4,327 feet) as quickly as possible due to previous incidents where he has suffered altitude sickness. Anderson flew into Salt Lake City on Saturday morning and flew out on Saturday night. Altitude sickness can cause a variety of symptoms including: fatigue, insomnia, headache, nausea, vomiting, rapid heart rate and shortness of breath in milder forms. More serious forms can include chest tightness, coughing, decreased consciousness, and more. According to the person we spoke with, it just isn’t worth the risk for Anderson to spend longer periods of time at high altitude.

Speaking on the Pulpmx Show last night, Rocky Mountain ATV/MC-WPS-KTM’s Davi Millsaps said he is dealing with separate wrist injuries that could require surgery. According to Davi, his right wrist has a little bit of a torn ligament, but mostly broken bones. He said the injury will heal on its own, so it’s not a major concern. The left wrist, according to Davi, is the concern right now. He is dealing with ligaments that are completely torn and the bones have separated. Millsaps said he is still trying to make a decision on how to proceed.

Millsaps had a scary moment halfway through the main event in Salt Lake City.

“I’m still trying to narrow that whole thing down,” he said. “I’ve had about six different opinions now on what to do. It’s not really a cut and dry case—I wish it was.”

The injury initially began last year during the Canadian Nationals (where Millsaps won the MX1 title) and he aggravated it in Atlanta this year. Millsaps is dealing with some pain while riding and hasn’t been able to train like he would like this season, which makes his performance all the more impressive. Millsaps finished seventh in Salt Lake City on Saturday and is currently tied for sixth in points with teammate Blake Baggett.

With Cole Seely and Ken Roczen sidelined, Honda HRC called up Christian Craig from the GEICO Honda team for the weekend. Craig, who will fill-in for Roczen for the entire Lucas Oil Pro Motocross Championship, had never previously ridden 450SX in a points paying race. He showed great speed in qualifying, finishing sixth, but said the nerves of his first 450 race got the best of him in his heat. He finished the main event in 11th.

“Today was a great experience,” he said in a team statement. “I didn't have huge expectations for tonight because I wasn't sure where I'd stack up to all these guys with it being my first 450 Supercross race other than Monster Energy Cup, but I had honestly hoped for a top 10. I qualified sixth in practice, which I was pretty happy with. I went into the heat and just rode tight the first couple laps, made some mistakes, and I think the nerves just got the best of me. I transferred out of the semi with a fourth. In the main, I got a bad start and just tried to make little passes here and there and take advantage of people's mistakes. With minimal time on the bike, I wasn't too far off my goal by finishing 11th. This was a good preview of what I can expect leading into the summer. I'm excited for the opportunity that Honda has given me.”

Justin Bogle’s holeshot in the 450 main event was washed away when he went down in the whoops on lap seven. Bogle remounted but only completed five more laps and finished 21st.

“I just made a mistake in the whoops and it ended up costing us,” explained Bogle in a Yoshimura/RCH Suzuki statement. “We had a great night going right up until that point. I qualified straight out of the heat, drilled the holeshot in the main event, and was running with the leaders until I went down. That’s just kind of how our season has gone. It’s a tough pill to swallow and I’m not making any excuses. We’ll just keep working hard and hope our luck swings back the other way.”

Yamalube/Star Racing Yamaha’s Aaron Plessinger nearly pushed the series to Vegas, as he jumped out to an early lead on Saturday. But he was bitten by a tough whoops section and went down hard. He got up holding his wrist and wasn’t able to finish the race. A source close to the team told us Plessinger was fine after the race. Justin Hill, who clinched the championship on Saturday, had this to say about Plessinger earlier this week:

“He was just sending it. He was riding like he had nothing to lose, which he didn’t. I respect him beyond words for that winning or die trying approach. He went for it and I love the guy for that. I respect that he gave that to the championship. He gave it all to try and win. That being said, the position I was in I had to take the precautions that I took and that ended up being the right thing for me to do. I couldn’t be more happy with the decisions that I made.”

Monster Energy/Pro Circuit Kawasaki got Austin Forkner back after the rookie missed Seattle due to a sore right hip. Due to the 250SX West Region break, this was actually his first race in more than two months. Forkner was in second with about five mintues plus a lap to go, when he also got bit by the whoops. He remounted to finish sixth.

“If I can take away anything from tonight I am really happy with how I rode overall,” said Forkner. “I made a small mistake that led to a bigger get off, but it could have definitely been worse because those whoops were eating up a lot of people. I’ll take the sixth and am looking forward to my first race in Vegas in two weeks.”

Following his fifth on Saturday, Jimmy Decotis now has three top fives in eight rounds. Entering the season, Decotis had only garnered six career top fives since his rookie year in 2010. While it’s been a career year for the New England fan favorite, he said he didn’t ride that well at Salt Lake City.

“Salt Lake City was a tough day for me,” he said in a GEICO Honda team statement. “I struggled all day in practice with the track. My team did such a great job keeping me positive and on track. I got a bad start in the heat and finished sixth. The main event I put myself into a great position starting in the top five, and I ran fourth for a while and eventually ended up in fifth. It wasn't my best race of the year but I was happy with my execution of the main event and that I made positive changes after the heat race. I can't wait for Vegas to mix it up with the East Coast boys!”

Tyler Bowers returned to action just 84 days after fracturing his femur in Glendale. The 51Fifty Energy Drink Yamaha rider finished 10th, just his second top 10 of the season. "I've really missed being back at the races," said Bowers in a team press release. "I don't think I rode to my full potential; however, I know top 10 is pretty strong after this much time off. I've got that race under my belt and I'll work my butt off for the next two weeks and be ready for Vegas."

In just his second full season in supercross, Bowers’ teammate Hayden Mellross continues to be a consistent top 10 threat. In Salt Lake City, Mellross grabbed eighth, his fourth top 10 in six races this year. "Even though this wasn't a career best finish for me, I still feel it was the best I have rode all season," he said. "I was able to ride strong for the entirety of the race and set some of the fastest times of the night."

Autotrader.com/JGR Suzuki’s Cade Autenrieth had a tough go in his professional debut at the Seattle Supercross (he is the fill-in for the injured Phil Nicoletti), getting just one 10-minute practice during Seattle’s shortened schedule. He also suffered through bike problems and crashes, and failed to make the main event there. His second shot came in Salt Lake City and it went much better, as he made the main and finished 13th.