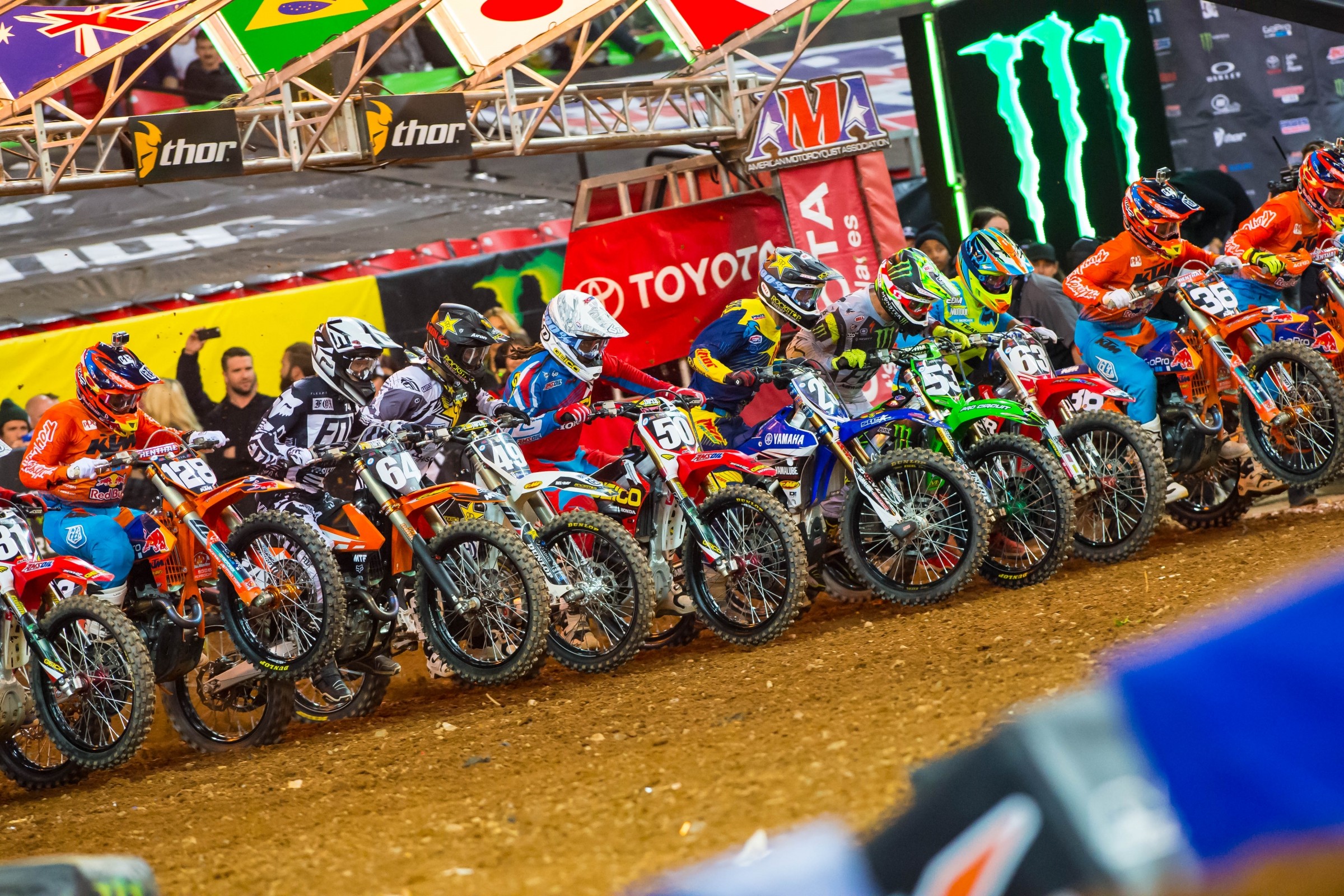 We’re all aghast at the lack of 2017 rides for guys like Dean Wilson, Malcolm Stewart, James Stewart, Jake Weimer, Broc Tickle, and Justin Bogle. Although we expect Tickle and Bogle to be officially announced as members of RCH Suzuki at some point (they’re testing with the team throughout this off-season) it is nearly December and it doesn’t sound like that team is exactly killing it in terms of sponsor dollars. If the RCH team does get out there, it sounds like those two might be riding for free and hoping to collect some gear money.

It’s a rough time for the sport right now and I’m not exactly sure why. We went through a downtime a few years ago in terms of an actual economic recession, but bike sales have rebounded somewhat. The distributors, gear people, and online people I talk to say sales are back to where they were in the heyday. But we’ve got to change some things up in our sport if we want to keep thriving going forward. Actually, in terms of the paddock, it isn’t exactly a graveyard. The pro pits are still big, there are lots of rigs, and lots of good-paying rides.

The problem is, it’s filled with teams racing the wrong class.

The 250SX class has become, in my opinion, part of the problem. The goal should be for any rider to move into the premier class and race the best of the best, but the structure of the 450 class, and the lack of wealth in it for anyone not at the very top, make moving up the worst possible thing for many.

There’s the NASCAR Cup series and then there’s the NASCAR Xfinity series. There’s IndyCar and then there’s Indy Lights. MotoGP is the top series for road racing but they also have Moto2 and Moto3 underneath it. These secondary series are all feeder series; they all have future stars in them or at least dudes that hope to be future stars. The teams in those divisions either don’t have sponsor dollars to play with the premier class but still want to go racing, or they're side units of the big teams that use the feeder series to develop talent.

The catch is that all of these series, be it Xfinity, Moto2, Indy Lights, and others all lack the real big commonly known stars of the sport, and the TV coverage isn’t as good as the premier division. Yet, they (many times) race at the same venues on the same weekend, but they’re there to be support classes. They’re there, they’re talked about, but they’re not celebrated like the big series.

In our sport the 125cc (now 250cc) class started out as a series where you could get your feet wet racing supercross. The promoters (wisely) broke the coasts into different regions to help reduce the costs for the riders. In those early years, you see, 125SX riders really weren’t full factory guys. Cutting the travel costs in half and holding all the races within driving distance was a big help in the 1980s. Also, the class wasn’t featured on TV much, if at all. You’d watch the 250 main event, and maybe see highlights of the 125s. It was all done to help the riders gain experience—no one wanted to see a 16 or 17-year-old thrown in against Rick Johnson, Jeff Ward and company. Those were grown men who would eat them alive!

That’s all changed now. There are 16 spots for factory-level 450 rides right now (three at KTM, two at Honda, two at Kawasaki, two at JGR Suzuki, two at Yamaha, one at MotoConcepts, two at Rocky Mountain KTM, and two at Husqvarna). I’m not putting RCH in there yet because we think they’re having a team but we’re not sure and again, it’s December and they haven’t announced a deal yet. Sixteen spots where the riders are making a good salary, getting expenses paid and having access to terrific parts. What are “terrific parts” you ask? Just trust me, I know.

Now, due to the two regions, there are 21 spots for factory-level 250 riders (four at GEICO, four at Pro Circuit, four at Star Yamaha, four at TLD KTM, two at JGR Suzuki, one at Rocky Mountain KTM, and two at Husqvarna). Plus, GEICO and PC often decide to put a fifth rider on for supercross only (Jimmy Decotis already has that spot for supercross with GEICO, consider that half of a ride since it’s SX-only). All 21 of these full-time riders make a salary near 100K a year, have top-five or top-three bonuses, and race half the supercross races.

Now you tell me, seeing those stats above, is the 250 class a support class or a way of life? Simply put, the 250 class is affecting the premier class, you know, the one with Ryan Dungey, Ken Roczen, and Eli Tomac. The one where, if you win, you’re the undisputed best rider in the world. The one where there are no rides for riders that do what they’re supposed to do and actually, you know, win.

Justin Bogle? BIG mistake trying your hardest and winning the 250SX title a couple of years ago. You don’t even have a ride right now! And what in the heck was Malcolm Stewart THINKING by winning the 250SX East Region last season? He had to move up so he’s a privateer right now. Nice one guys, way to really think this through. (Insert eye rolling emoji here.)

For this, I blame Jeremy McGrath. Oh and also taking a small bite of the blame pie is Ricky Carmichael. You see, these two riders won every single supercross championship for 10 out of 11 years. During that time, the OEMs that fielded premier class teams and spent all this money to go racing could only shrug their shoulders when their bosses asked what happened to their money. One dude dominated for so long (apologies to Jeff Emig, the one man who broke through in 1997) that the OEMs said “Screw it, we’ve got to win something!” just to justify their jobs and racing.

And that’s when you saw a seemingly 40-year old John Dowd get moved down to the 125 class, a move that would’ve been unthinkable years earlier. He won a championship. Or Nathan Ramsey win a 450SX race and then go back down to race 125’s (on a 250F) and win a ton of races. The teams chased championships, no matter what class. To the big bosses, the fact that Dowd, Ramsey, and Grant Langston were like Kramer in the Dojo in that Seinfeld episode (the kids never stood a chance!) didn’t matter. They had their Cycle News win ads!

We’ve got to get rid of the lifers in the 250 class, the highly-paid riders that live there due to injury or ineffectiveness or lack of motivation or—GASP—ACTUAL REAL LIVE TANKING (it happens). These guys have got to move into one class so we will have the best of the best racing. We’ve got to elevate the 450 class to become somewhere everyone wants to go.

But stay with me here, there’s still a place for 250 racing. I’m not advocating ditching them, but we’ve got to make those rides less important than they are now. Back down those salaries, back down the title bonuses to help the 450 class be THE class to race. How do we do this?

It starts with the promoters and the TV package. Look, GEICO, Monster, Rockstar, etc. see virtually no difference in seeing, say, a Zach Osborne on the podium than an Eli Tomac. A third’s a third, right? Well, it’s not and we all know this. Sorry Wacko Zacho but Tomac’s third is amazing while yours is impressive. You’re racing against half your 250 competition (divided by coast) while Tomac is racing the gnarliest dudes. But we feature the 250SX class on TV just like the 450SX class—in fact there’s no difference! Interviews, podiums, accolades up the wazoo, etc, etc. And that’s what we need to change.

(I’m not going to start talking about the rule change that made 250SX class count for national numbers because I do not want to smash my laptop. All I have to say to that is I wish I got paid my full Racer X salary for half the work I do now. That would be awesome.)

If we didn’t feature the 250 class on live TV, made it delayed, or showed just the mains that would make that class less valuable to sponsors, right? I’m not advocating teams close up shop because theoretically with less sponsor money comes less salaries and bonuses. Maybe GEICO pushes to do an all-450 team and we have more support there?

I know the OEMs have 250cc motorcycles they want to sell, but it’s not like amateurs are going to go from 80s to 450s just because that’s what is on live TV. The 250 is still the natural stop after getting off 80s or 85s or 105s or whatever the heck they are now. And riders like Cooper Webb and Justin Barcia will still win races, be featured as stars, and be on TV—they’ll just be on TV less than before and they won’t make nearly as much money as they used to. And maybe we don’t do a full podium for those dudes. Maybe we ditch qualifying races also. Race during the day and qualify for the main that way. I don’t know, I’m spit-balling here.

All I know is that the 250 class is supposed to be a stepping stone and it’s turned into somewhere where there are more rides available than the 450 class. You can make a ton of money and race 10-plus years, but winning a title is a bad thing. Ask Malcolm Stewart, Bogle, or even Tim Ferry back in ’97. Winning the title proved to be a detriment in their careers. We’ve got to fix this so that the 450 class is the place to be and it starts by limiting the exposure and money in the 250 class ASAP.