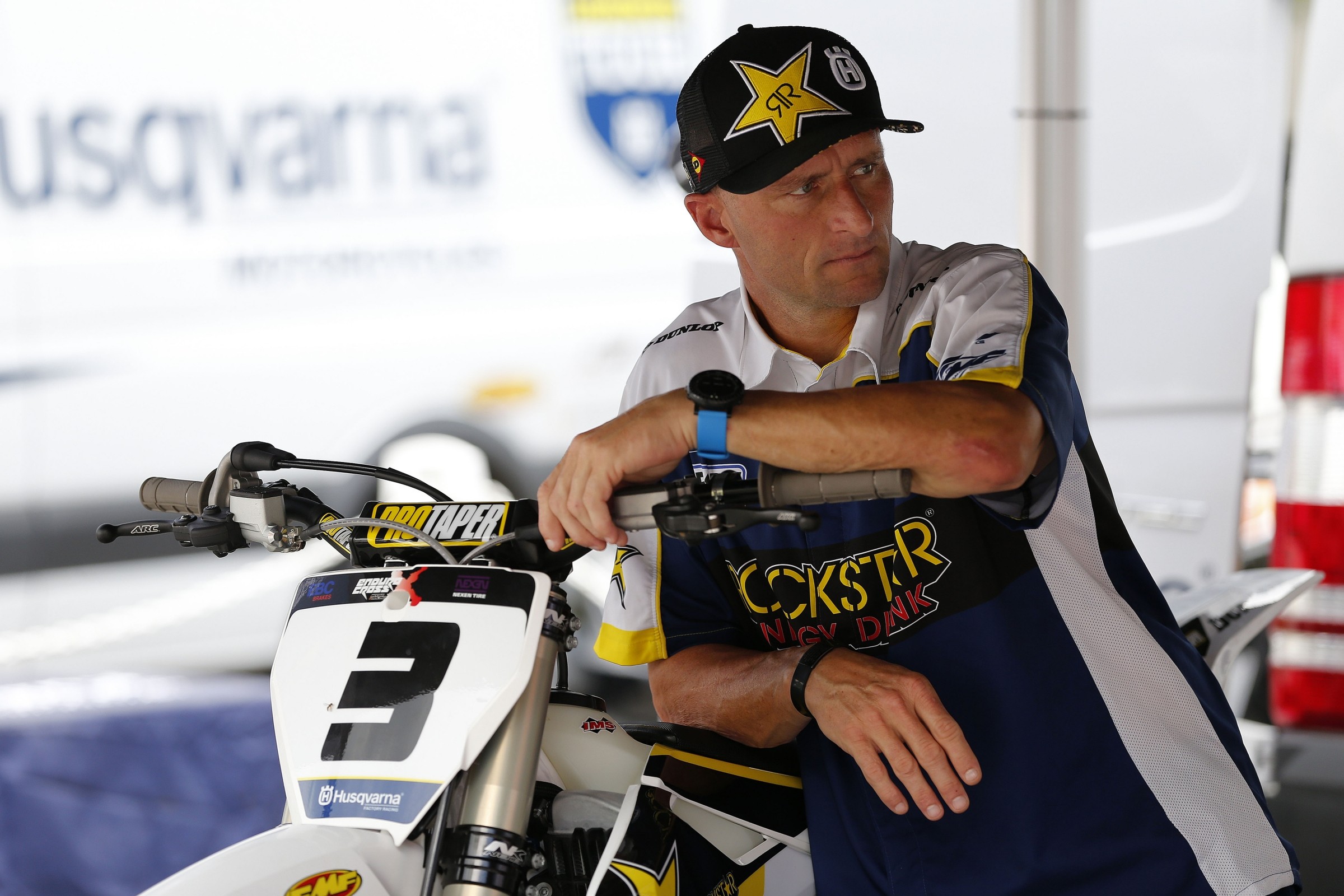 Mike Brown just can’t stop working around two wheels. He no longer has a deal as a full-time factory rider, but as he nears age 45, he still has a love for the sport that goes deeper than most 20 year olds. Brown is now working on a riding facility and has plans to become a trainer and coach, but we at Racer X think that before Mike can finally say that he’s done as a racer, he needs to check one more box: the legend of Tennessee’s Muddy Creek Raceway has somehow never raced the Muddy Creek National in Lucas Oil Pro Motocross. Could this year finally be the year? He would like it to be so. Stay tuned!

Racer X: Mike, what are you doing these days?
Mike Brown: I’m working for Husky still, doing PR, so I do a lot of special events for them. Next week I’ll do the Sea Otter bicycle race, and then I’ll do a girls ride day. We’ll have about 1300 ladies over four days, riding the bikes at Gorman [California]; it’s a big deal, I think. [Note: check out BabesRideOut.com.] I’ve got a thing in Salt Lake City, a demo ride day in May, then I’m coming back out to California in June for another ladies ride day. Just stuff like that. Back home, I’ve got that track—I-81 Motorsports Park. Trying to help out with that and get it back up and running. My main thing is, I’m trying to get my schools up and running. I’d love to be like an Aldon [Baker], but I haven’t had time to really work on it yet and I’ve never really put it out there, because I’ve always been so busy racing, even the last couple of months. I’d love to work with a supercross kid and maybe go to the races, get something like that going. We’ll see where it goes from here. I need to get the schools going, but the riding park, it’s pretty big, it’s 550 acres, they put a lot of races on—we’ll have a Full Gas Sprint Enduro in a few weeks. The park is good, but the guy who runs it has gotten sick and has stepped down, so now I need to keep it going.

This is a place you knew as a rider?
Oh yeah. It’s a place I grew up riding; it was called Dallas Ricker. I raced there in 1989 and 1990, that’s when it first opened, and I would ride there all the time. Kirk from Jim’s Motorcycle Sales, they bought it, now it’s partly mine and I’m running it. We’ll see! It’s a big park, it’s got dirt track car tracks, go-kart tracks, then even had a GNCC there back in like ’95 or something like that. It’s got everything you need; I’m just trying to get it going.

Will you do a lot of your training stuff there, or do you have tracks at your own house?
I can do a lot of it there, but my house, where I live, I’ve got almost 40 acres and I have tracks there. But I would like to do most of it at the park. I would still like to travel, too. I don’t want to just stop. I’d like to maybe have a place kind of like Club MX is now, this place has all of the stuff you need for that, but I just need to figure out what to do. Maybe I have some kids staying there and riding there, but I’d also like to travel still also. I’ve just got my website going now— mxbrownacademy.com—and we have it on all the social media, @mxbrownacademy. I’m just trying to figure it out.

What it sounds like to me is, you’ve been racing for so damned long, you’ve got a big adjustment here.
Oh yeah, and I’m about to go crazy. I really just stopped. I just got back from a month and a half trip—I was in Argentina, I was in Australia, I was in Italy, France—I just got back a week and a half ago, and I think that was my last hurrah, really. I’ve only got a few other races planned, nothing big, now it’s time to settle down and figure out what I’m doing. I’m nervous! I’ve got to be doing something all the time or I start going crazy. I don’t want to go from doing a lot to doing nothing and then to doing too much.

You need to organize it.
Yeah, and I’m not good at that!

You’ve said this before, and is it still true: You once quit racing for a brief time, and then you realized you missed it, and that’s why you can keep this candle burning?
Yeah that’s pretty much it, plus, I started late—I started when I was 13. Maybe that’s helped me go a little longer. I didn’t start when I was 5. I don’t know, to me, I look at it as a fun job. I didn’t quit when I was 30, I kept going, and it’s fun so why would I stop? I always loved what I was doing, it was a job I got paid a lot to do, and I loved traveling. I understand a lot of guys got burned out on it, and I can see that. I can feel what it’s like to be at that point. I’m not on a full factory team anymore so it’s time to move on. The way I see it, if I’m still liking it, why would I stop?

What’s funny about you though, is that you seem to be the most down-home southern guy around, but you also love traveling around the world.
I do. Probably traveling is why I keep doing it. I’ve got a lot of friends over there [Europe]. Way back when I moved over there to race the GPs, I made a lot of friends and that’s probably why I like it; I get to see a lot of people I know. It’s not so foreign to me now. When I first went over there, yeah, I cried my eyes out when I left to go to Italy in 1997. I didn’t know anyone or anything. I wanted to come home. But now I know people everywhere. I see people I knew 20 years ago, so it’s not any different for me to go down to Australia now than it is to drive down the road and go to some city in the U.S.

Are you going to do any high profile races? Maybe an EnduroCross like you had been doing, or a GNCC? They have that Tennessee Knockout Extreme Enduro down by you.
I would like to. I would like to do the Knockout, maybe a few GNCCs or EnduroCross; I just need to see here in a little bit. But the focus is the track and the schools, getting it going before winter time so it will be ready for next year. I’d love to be racing right now, but I need to get this place going, because that’s going to be my future and I need to get it going while my name is still out there a little bit.

Okay, last thing: Any chance of racing the Muddy Creek National? C’mon Mike! You’ve got to do it!
I’d love to. If I could get a bike from the Rockstar Husky team I’d be there, 100 percent. I would need to start training now, and I would do it, I’d start training as hard as I could for it right now. But I won’t go out there and do it on a standard bike. I need to have a good motor and suspension. That would be perfect, that’s where I had my first race and that’s where I could have my last race. I’ve talked to Sam [Gammon, track operator] about having a retirement party there, but I haven’t gotten back to him about it in a while. I need to. But it would be my dream to race it. I’ve probably ridden at that track more than anyone ever has, but I’ve never gotten to race the national there. I would love it, and that’s something I think about inside, that I never got to race a national there. But I’ve never spoken to anyone at Rockstar over there, I would hope they would do it, but I don’t know, I need to ask but I hate calling people and asking for things. I never call and ask for anything, and I know those type of parts are hard to come by.

If Davey [Coombs] has to change the National date right now just so you can be available and race, he’ll do it.
[Laughs] I know! I could probably get them a couple extra spectators there I’m sure! All I want is an answer from the team, if they give me a bike I will do it.