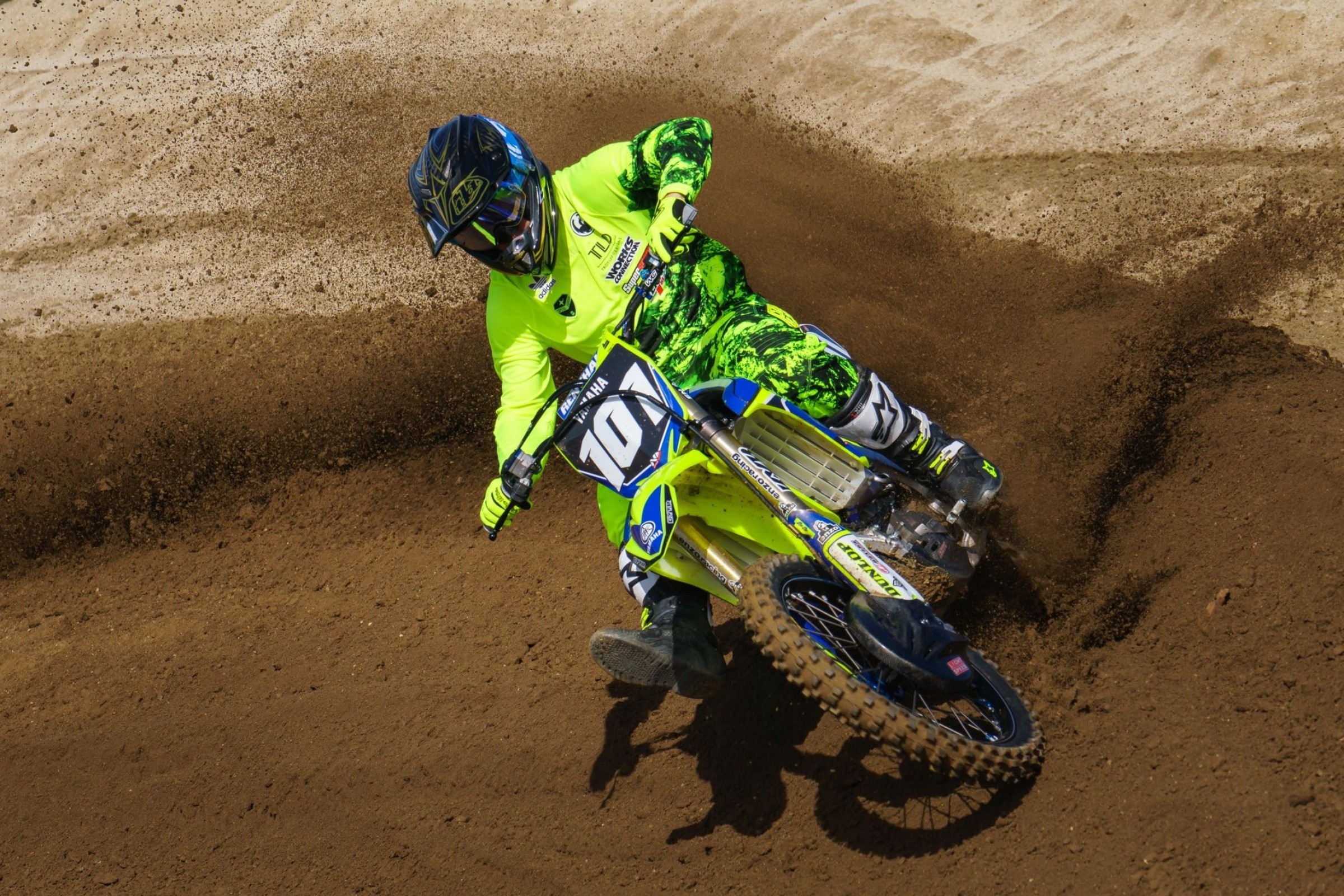 Love the column. I read it every week. I like the perspective you bring to the questions you receive and I was hoping you could give me your take on something that bothers the ever-loving sh*t out of me.

What is the deal with so many pros tucking their ears into their hats? I don't get it. The vast majority of people outside the industry don't do this. Why is it so prevalent in motocross? It looks ridiculous and makes me cringe every time I see it. I tried it with one of my hats and it's wildly uncomfortable. I can only imagine that after some time, your ears would begin to hurt because they're bent/pinched in a way they're not meant to be. Thoughts?

Keep up the good work, sir.

The tucked-in-ears-phenomenon is something I don’t quite get either. Unfortunately, there is a lot of monkey see, monkey do in this industry. From podium speak to fluorescent gear to the cycling craze to tucking your ears into your hat like a five-year-old wearing his dad’s baseball cap. If you look at athletes in any other sport they wear their hats like normal human beings; I don’t know why riders think this is cool. And, honestly, think about the designs and colors in your riding gear. Would you wear those colors or patterns out in public? Maybe if you live in the Bay Area or Miami you could pull it off. Hopefully the trend of wearing hats like that will fade out like mullets of the 1980s, and for the same reason.

I really do not have anything clever or smart to say. Just two questions: It seems as though during the supercross season the on track injuries are much more severe than they have been in years past and especially back in the 70's and 80's. Is this an accurate observation? Also the riders always comment about the ruts that develop as the racing goes through the night. This also happens on the real motocross tracks during the summer. Back in the 1970's at Red Bud and the real Mid-Ohio track, ruts only developed if it rained the day before or on race day. Otherwise, the tracks tended to have some dusty hard packed sections. Some of the tracks would actually get a blue groove in parts were the dirt was so hard. Is it possible to have a balance between dust and ruts? One last question/comment... MXA ran a picture in 1974 of Jimmy Weinert and Tony Distefano. The picture was taken during the 1974 500cc outdoor nationals where Weinert finished 1st in the standings and Distefano finished 2nd. It might help today’s racers to check that photo out. You don't have to take someone out to race close. As you can tell my frame of reference is the 1970's.

This is a pretty common argument in bench racing sessions around the world. It certainly seems like we hear of more severe injuries than we used to. You could point to much faster, heavier bikes that allow riders with less technical ability to go much faster and jump further/higher than ever before. Tracks have gone away from natural terrain and emulated supercross tracks with 60 to 100 foot jumps becoming a standard obstacle at local venues around the world. Jumping that far on a local track was largely unheard of even 20 years ago and gravity is a bitch when falling from those heights. Helmets have just begun to catch up and boots are much better, but the rest of our protective equipment is no safer than it was in the 1990s or earlier.

The other side of the coin is that the internet has shrunk the size of the global racing community. When a rider suffers a spinal cord injury we hear about it later that same day around the world. Are there more injuries with greater severity or just better communication? I think both.

As far as track conditions go, I would much rather deal with some ruts in the track, which slow it down and make it more technical, than squint through the dust for 35 minutes. Track prep was awful back in the 1980s; apparently water trucks and hoses weren’t invented until sometime after that decade.

And I don’t know if this is the photo you were talking about but this was a Racer X Illustrated cover that shows Tony D and the Jammer slugging it out. We all like to remember the past in a candy-coated haze, and I’m sure there was some great racing in that era, but we still have great races. Watch the Seattle round from last weekend if you don’t believe me. Thanks for the questions, Michigan, and keep twisting that throttle.

I'm sure you've had a truckload of questions about the Reed/Dungey kindergarten fight at St. Louis. So I would like to ask two questions that I have in relation to that incident.

First, why can't the AMA/FIM keep anything close to consistent? We've seen Pieck get fined and suspended for two races last year. Jason Anderson DQ'd for the night, and Cristian Craig fined and forced to take the final spot on the gate for the main event this year. We've also seen Alessi, Friese, and Barcia who slammed Alex Ray harder than I've seen anyone in a while not get any kind of fine or penalty. What Chad did was pretty dumb. However he wasn't trying to take Dungey out, he used a smarter tactic to get his point across. A $5000 fine and 5 points lost, a drop in the bucket. Can we just make something consistent so riders and teams are aware of the consequences for their actions?

Second, when did moto get so soft? I've grown up watching SX beginning in the late eighties. Those guys were tough and would put you on the ground or slam you without thinking twice about it. I watched my first race in person at Vegas in 92. That night right in front of us Bradshaw took out Matiasevich and himself in spectacular fashion. And Jeff just got up, told Damon he was #1 and they went about their business. Now days you have guys whining over bump passes. Almost in tears because the sand got them dirty. And always complaining about the tracks breaking down and being rough. You see it locally every weekend as well. I'm curious about your thoughts on this because you were there at a time when the sport was ruled by badasses who would do anything to win.

I’ve definitely beaten that Reed/Dungey topic to death and I think I’ve made my point of view clear. As far as the AMA goes, I’m just happy they are doing something. They are trying to be as consistent as possible, but every incident has a different set of circumstances so it isn’t black and white. They have made it clear that if you throw a punch/slap/jab at another rider you are disqualified for the night, end of story. If you throw a barrage of haymakers at another rider on the track in the middle of a race, shove him over a berm, and generally assault him like a United Airlines security guard maybe you get DQ’d for two rounds. That seems fair. The problem is that these penalties are subjective. Is it a racing incident or a malicious attack? Sometimes it can be a tough call. Personally, I think Craig got off easy in his contact with Martin. It was in practice, not a race, so it was clearly not a racing incident. Barcia and Friese have both made more idiotic pass attempts than Tony Romo, but in the AMA’s eyes they weren’t bad enough to warrant penalties. Because each incident is different and has different circumstances you can’t have a standard rule that covers every infraction. Again, John Gallagher [FIM Race Director] and his team have done a good job of at least enforcing penalties when they are warranted, even if they aren’t the same each time.

Some riders are definitely spoiled these days, but when you are jumping as far as the guys are these days the ruts become a much bigger safety issue than they were back then. I think the bigger/faster bikes are part of the racing problem also. Two strokes were more difficult to ride and that created a larger gap in speed between riders. They also forced more mistakes, which helped racing. Also, because you weren’t going as fast you were more likely to run in and make contact with another rider without going down. I also believe baseball stadiums are bad for racing. The shorter straightaways and 90-degree turns don’t allow riders to pass like the bigger football stadium layouts. Look how much passing went on in Phoenix, Seattle and the other big venues this year. That 1980s and 1990s era of racing was something special, for sure. The sport has changed immensely; some things good and others not so much. But it’s still the best sport there is.