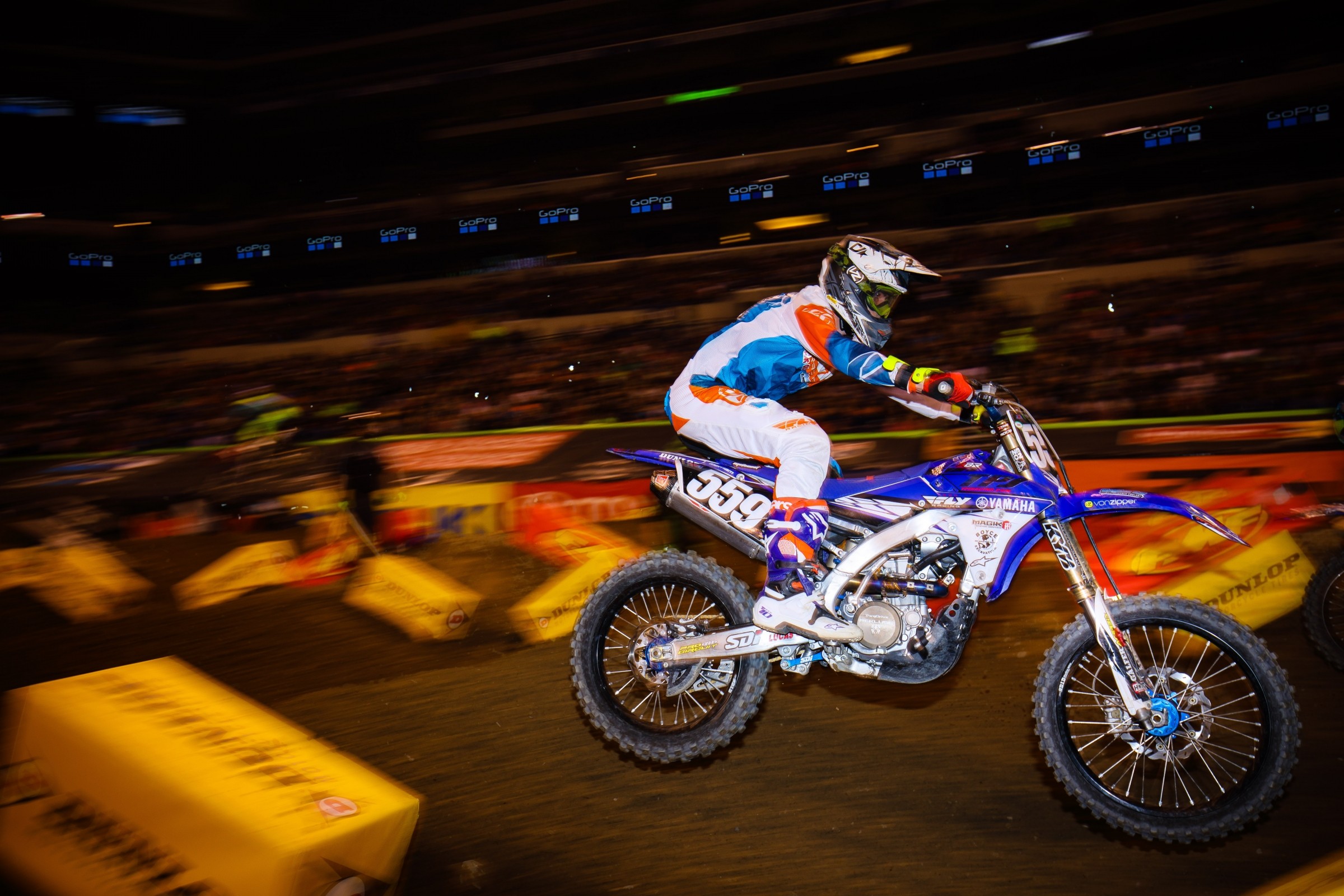 When packing your bag for a supercross race, a corsage, boom box, and some comfy dancing shoes don’t normally make the list. For Dylan Merriam, though, all those items were a necessity as he and The Professional Journey (formerly The Privateer Journey) team hosted a mini prom experience for a lucky fan at the St. Louis Supercross. Like a lot of kids who go to prom, Dylan was pretty unsure about the whole thing, but as you’ll read below, it all worked out fine.

We caught up with the supercross prom king this week to see how the night went, find out who the best dancer under the TPJ tent is, and what the atmosphere is like on Privateer Island.

Racer X: So you had a prom date back in St. Louis. Talk to me about how that all came together.
Dylan Merriam: So basically Sean Brennen, the PR guy [for Feld Motor Sports], he had met this girl the week before and she wanted to ask her prom date to prom on the jumbotron. Well, she asked him [Sean] and he said okay, but she ended up telling him that they couldn’t do it because her friend that she was gonna ask couldn’t go to prom. So Sean kind of thought maybe he could take something from that and make it into something bigger. Kind of draw more attention to the sport and show that we do more than just race. So he kind of wanted to give her something, give her a night all about her and just kind of stoke her out. He basically told me that he was going to get her and her whole family press box tickets for the race and she could get dressed up in her whole dress and everything—makeup and all that. She would get to meet a rider and get to wear a dress all day and all that. But he surprised her with that she was going to go down on the track with me and take pictures and do some video footage and stuff like that. We were supposed to do a dance … I wasn’t quite into the dance thing. [Laughs] I was kind of like, “Uhhh, I don’t know about that.” So we just did a little twirl for the camera. I kind of got put in a spot and I knew it would be … it was kind of a win win for everyone.

What was your reaction when Sean asked you to do it?
When he first asked me to do it, honestly I was like, I don’t think I’m gonna do this. It all sounded really kind of weird, but he explained it to me and he said, “Try to think just more about what you’re doing for her rather than yourself.” It honestly ended up making her night. She was so happy. So it felt good to do something nice for someone else.

And just so it’s clear to everyone, you did not know this girl at all before this.
No, no. And that’s thing, everyone’s hitting me up on Instagram and all this like, “Who is this girl! Is that your girlfriend? What’s this prom thing?” Blah blah blah, like nobody gets it! We did an interview on it and they released it, but on Supercross Live. So if you didn’t watch Supercross Live … everyone still doesn’t know what’s going on. They should have made it pretty clear about what was going on, but I mean, it’s alright. I don’t really care.

It’s all said and done now. What did you think of how it went?
It went good. It was smooth. It was pretty simple. We just had to take some pictures. It helped that the Enticknaps [Adam and Tyler], they jumped in on it too. They’re kind of the life of the party so that helped. It made it a little more fun and easy, stuff like that. It was good.

Who would you say is the best dancer under the TPJ [The Professional Journey], Adam, Tyler, or Ted [Parks, team owner]?
Oh, Ted! Ted hands down. Ted’s got the slow jam down, I don’t know if anyone else has got that. But I actually missed the part where Tyler and Adam danced. I didn’t see that because I went to eat.

So this girl was looking for a prom date and the animals of privateer island were willing to help, @dylan_merriam was the official date, but Texas Teddy Parks swooped in for the slow dancing. Poor girl! Also had @7deucedeuce and @tylerenticknap723 popping and locking to a boombox. This prom was better than yours!

Who had the best dance moves?

Is that kind of standard behavior over there?
I mean, there’s always something going on. We’ve never had anything like what that was. But Tyler and Adam, everybody loves them and there’s always noise around the pits so you can’t miss them.

So on the TPJ website it says if you want to be a part of the team you have to submit an application and Ted will decide if you’re on or not. That’s a pretty unique way to decide who’s a part of the program. Is that how it went down for you?
It is. I’m from California and that’s where I train and live. So I was scheduled to do West Coast Supercross and I broke my wrist three weeks before Anaheim 1. We were put in a situation … I really wanted to have a full series under my belt. You can’t beat the experience. It left me with either having to rush back for Oakland or Dallas and then we had a big break and I was only left with the last two or three [rounds]. Which before we made the decision we were planning on waiting until the last three. But I train with Buddy Antunez and he was like, “Well, what if you could throw something together for the East Coast.” At first I was just like, that’s impossible. There’s no way financially … that’s just a lot. But after talking to my parents about it and stuff, we found out we were looking for people to take bikes to the races and someone told us about Ted’s deal. Once we looked into it, the price almost went out the window. Because what you actually get for the price, you can’t really beat it. It’s a really good deal. So we decided that we were going to do the whole East Coast series and we’re definitely glad that’s the way we went.

What’s it like being a part of that TPJ program? Are you guys all pretty close to each other?
Pretty much. There’s obviously … honestly I’m not saying any names, but there’s probably one or two people on the team that not many people like. But other than that, everyone is super close. The Enticknaps are very brotherly and they kind of bring that family feeling. Ted and his wife cook dinner for us and we all go and we eat together basically before the race and stuff like that. I would say pretty much more of a family type of atmosphere.

And with so many privateers fighting for main event spots underneath one tent, do things ever get tense over there?
Actually, no. It’s really not too bad. There’s only me and two other 250 guys. One of them, John Short, him and I are very close and we’ve actually had one run in before. It was kind of out of both of our control so we were totally cool with it. Everyone under there is very respectful, so there hasn’t really been too much. At times some people don’t want to talk to each other, you know, just in the moment. But at the end of the day everyone’s cool.