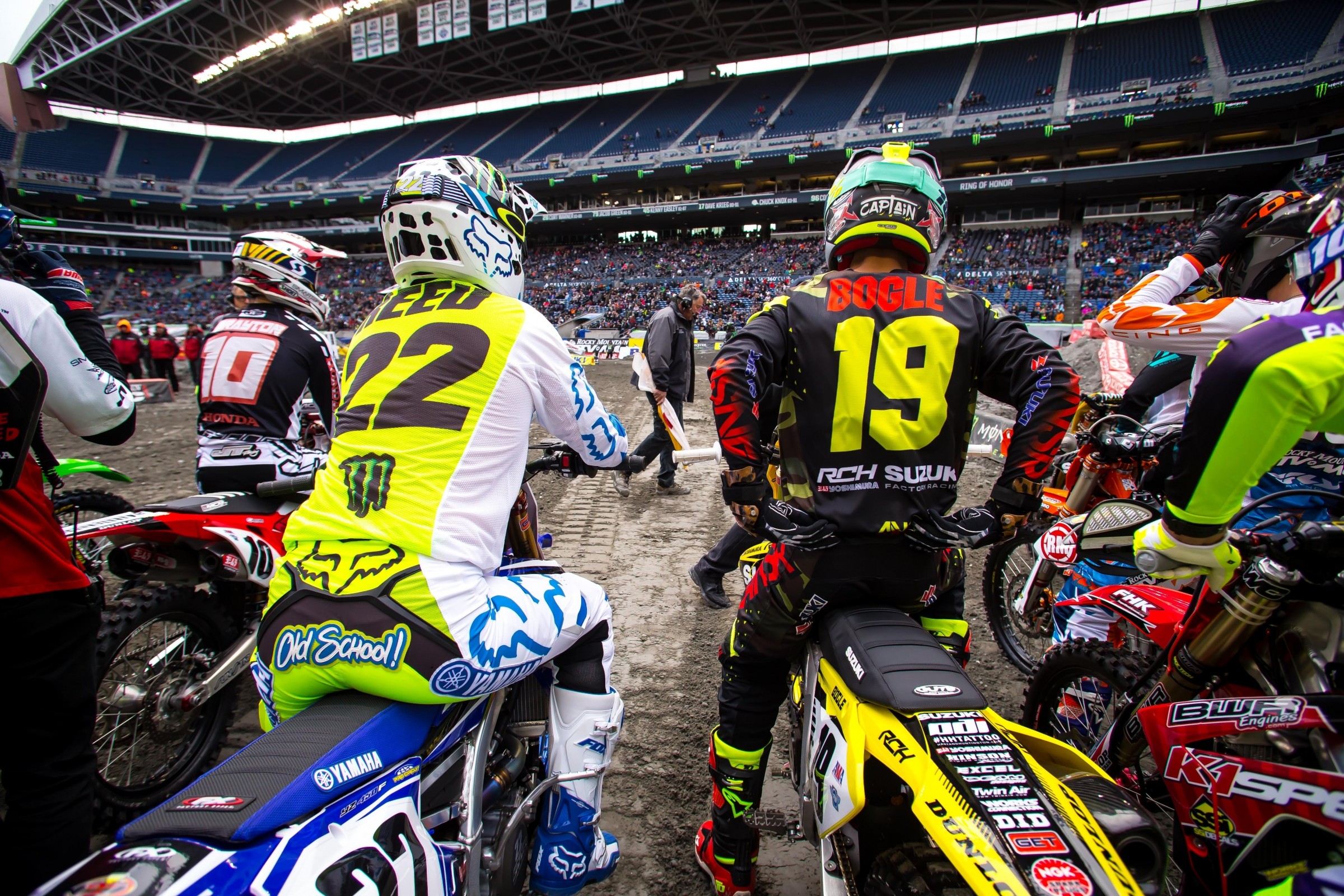 As Jason Thomas mentioned earlier today in his “Breakdown” column, you have to go all the way back to 1992, when Damon Bradshaw lost the title to Jeff Stanton, to find the last time a rider with the most wins didn’t go on to win the title. [Update: It also happened in 2003, 2006 and 2010. Our bad.] That stat doesn’t bode well for Ryan Dungey, who is now tied in points with Eli Tomac following his third fourth place finish of the year. While fourth is Dungey’s worst result of the season thus far, he only has two wins to Tomac’s eight. With three rounds remaining, Dungey can’t catch Tomac on wins, but he still controls his own destiny—as does Tomac.

In Seattle, Dungey put in another brilliant performance, coming from dead last after a first turn crash to capture fourth. Dungey wasn’t part of the post-race press conference, but did issue a statement in a KTM press release following the race.

“Obviously going down in the first turn wasn’t ideal, but from that point forward we just tried to pick as many riders off as we could and tried to gain as many championship points as we could and not make any big mistakes,” he said. “Overall it was a good night—we salvaged what we could. I felt great, the bike felt awesome, and everything was all lined up—we just had a little mishap in the first turn, but that’s just the way it goes.”

RCH/Yoshimura Suzuki debuted a new sponsor at Seattle. Prior to the weekend, RCH announced a deal with tech giant Microsoft, which is headquartered in Redmond, Washington. Although the deal is only for the remainder of supercross, there is hope for a longer deal. Part of the deal is for RCH to “showcase virtual reality, Xbox, and Microsoft Surface devices trackside to the multitude of RCH and supercross fans.”

“The Microsoft/RCH Digital Transformation in the pits in Seattle was an incredible experience,” said RCH co-owner Carey Hart in a team press release. “The environment and experience itself was even better than we expected. Supercross fans of all ages were beyond enthusiastic about the opportunity to experience virtual reality, play Xbox and try the amazing Microsoft Surface products. It’s exciting to see the potential this partnership has for RCH and the industry as a whole.”

On the track, RCH had success as well. Broc Tickle put in his best performance since a podium in Toronto with a sixth on Saturday. “Seattle was obviously a place I was looking forward to,” said Tickle in a statement. “I got my first win there in 2010 in the Lites [250SX] Class. The track always seems to have soft dirt and it gets rutted and tough. I seem to excel in those conditions so I was looking forward to it going in. I was sick all week leading into the race. I didn’t ride. I didn’t train. I didn’t do anything. I kind of felt off a little bit all day. I just wasn’t feeling it and I’m sure that had something to do with being sick all week so I was stoked to come away with a sixth-place finish.”

Justin Bogle was involved in the Ryan Dungey first turn crash and came from 18th (after lap one) to finish 12th. “The start in the main event was a disaster,” said Bogle. “I was in pretty good position, but I got pushed into a Tuff Block going into the first corner and me and a few other guys went down. After that, all I could do was try to make laps and make up for lost time. It’s just kind of par for the course how our season has gone, but there were still a lot of positive takeaways. I’m looking forward to the off weekend and gearing up for the last three.”

Another strong weekend for the Rocky Mountain ATV/MC–WPS-KTM team, with Davi Millsaps holding fourth until the final stages before Ryan Dungey got him. Of course, this will lead to many "Did Davi help a fellow KTM rider for points?" questions that will never be answered, but we do know Davi always rides tough, rutted tracks well, and this was no exception. His teammate Blake Baggett was fast, also, and matched Dungey's pace for quite awhile after Dungey got around him, but then he crashed and went off the track in the rhythm section after the start. The crash didn't cost him any positions, though, and then he gained a spot when Cooper Webb fell, ultimately carding a seventh.

Sitting fourth in the 250 class with three laps to go, GEICO Honda’s Jimmy Decotis made a decision: he was going to get a podium or crash trying. “I wasn’t going to get fourth tonight, I was either going to get third or I was going to crash,” said Decotis in a team statement. “It’s been a long seven weeks of having to think about getting two fourths at the last two races.”

Decotis, who has been one of the few bright spots for the GECIO team this year, said he spent the break riding with Cooper Webb and Seattle 250SX winner Aaron Plessinger and that he was able to battle with them, and that he’s starting to believe in himself.

“During the break, I rode with Coop [Cooper Webb] and AP [Aaron Plessinger] and we had fun. And during the week, I can hang right in there with them if I’m feeling good. So, AP and I had fun battling in the heat race. I’m starting to fight back when I’m up there, because I’m starting to believe in myself now. I was just trying to do my best, I gave it everything I had.”

After Troy Lee Designs/Red Bull KTM’s Mitchell Oldenburg passed Decotis on lap 11 (of 14), he ramped it back up on lap 13, setting his second fastest lap of the night (57.514), but made a mistake and crashed prior to the white flag and finished sixth on the night.

“Mitchell [Oldenburg] passed me [for third] and I thought maybe I was dropping off, but then I saw we were starting to catch back up to [second place rider Justin] Hill. I knew we had two laps to go, so I laid it down and went as fast as I could on the next to last lap. Going to the white flag, I just missed the rut coming up the jump. And if I had hit the finish line jump, it would have been bad. I backed off at the last second, went into a mud hole, and a couple of guys ran into me. It ended up being a sixth, bummed about that, but I did everything I could. I passed a few guys back I put up a lot more fight than I have in the past, and I nailed all of my starts. That’s good progress.”

X-rays taken yesterday revealed that Shane McElrath sustained a stress fracture near the top of his left hip. The injury occurred when Chris Alldredge crashed in qualifying and McElrath, with nowhere to go, ran into him and hit his hip on his handlebars. McElrath toughed out the night to finish fifth. He wrote on Instagram that he is “already taking necessary steps to rest and heal as much as possible this week to get a good week in before Salt Lake as there is nothing needed to fix anything with the bone just a lot of muscle soreness/stiffness/trauma.” Monster Energy Supercross is off this weekend for Easter Sunday, and returns on April 22, in Salt Lake City. We’ll provide on update on his status once more is known.

Pumped for @freckle_28 on his first podium this weekend!!! After getting X-rays yesterday we found out I have a stress fracture near the top of my left hip from hitting the handlebars. Thank the Lord it wasn't worse especially for @chrisalldredge58because of how hard and where I hit him. Glad he is on the road to recovery! We are already taking necessary steps to rest and heal as much as possible this week to get a good week in before Salt Lake as there is nothing needed to fix anything with the bone just a lot of muscle soreness/stiffness/trauma. Felt really good on the bike this weekend just couldn't put my leg out in left handed turns. We will be okay

According to the Barn Pros/Home Depot Yamaha team, Allredge, who sustained a litany of injuries, has already been released by doctors and is at home recovering.

51FIFTY Energy Yamaha’s Hayden Mellross returned prior to the break from a hand injury to finish ninth in Arlington. The Australian was back in form on Saturday, taking a career-high seventh in the main event. "It's great to have a result like that tonight," Mellross mentioned in a post-race interview. "The track was tough, but I upped my riding and training during the break and it's really paying off. I'm bummed to see Noah [McConahy] go down and am hoping the best for him while he's recovering."

In just his third career 250SX main event start, Justin Hoeft finished inside the top 10 for the first time in his career on Saturday night. Hoeft, a former TLD KTM amateur rider, was picked up by the Ryan Hughes managed IBcorp Racing Team mid-way through the season. To learn more about the new team, pick up the June issue of Racer X Illustrated and read “Team Diversity.”