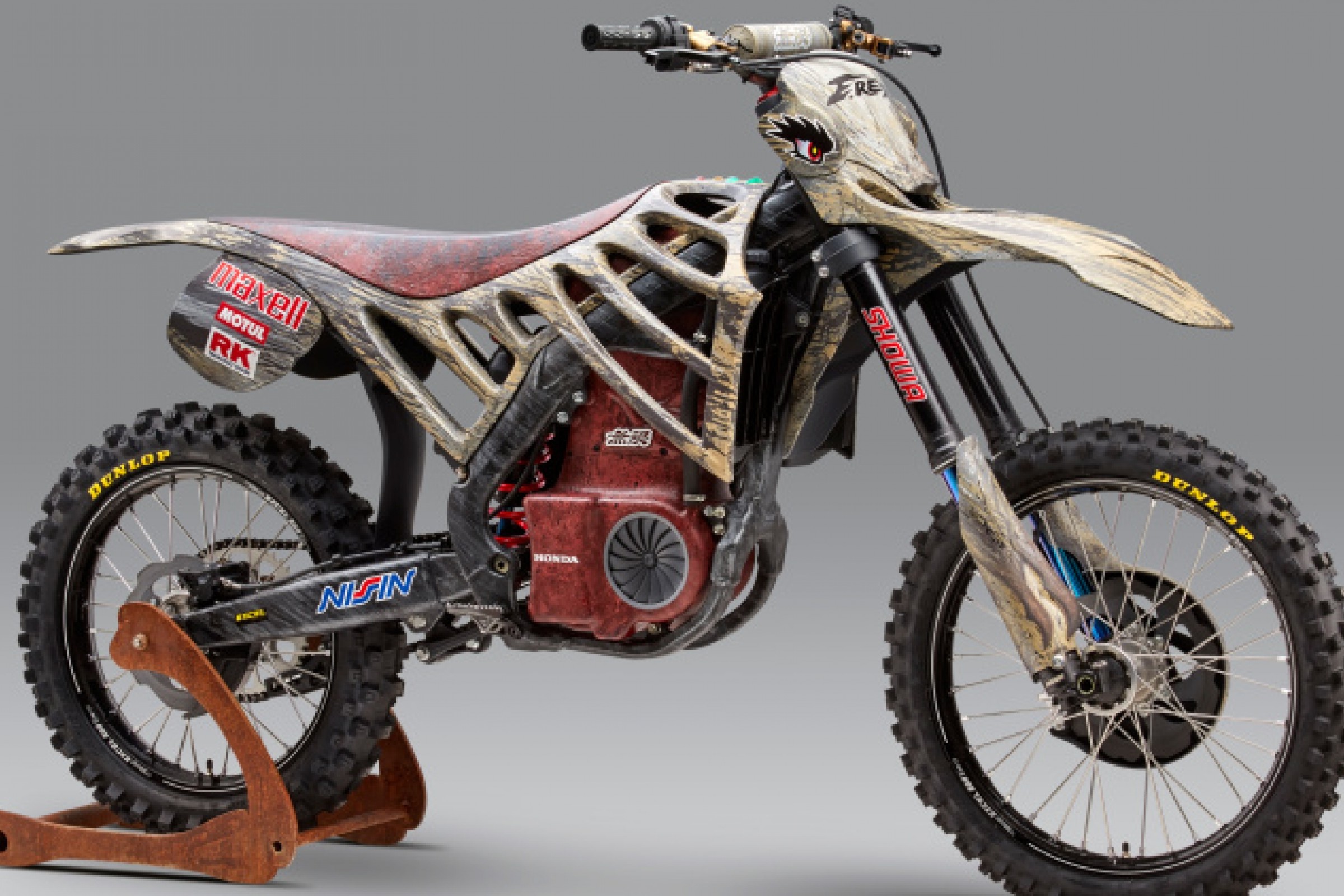 Honda Getting Involved in Electric

We can now include Honda in the group of manufacturers with an eye on electric dirt bikes. At the 44th Tokyo Motorcycle Show, Mugen, best known for designing and distributing aftermarket performance parts for Honda vehicles, debuted E.Rex, their electric concept bike. Mugen isn’t new to the electric game by any stretch. For the past five years, they’ve competed in the TT Zero, and won the last three. They're the favorites again this year, with riders John McGuinness and Guy Martin scheduled to compete for the team. According to Auto Blog, no “technical specifications were released” but in a press release, it was said that Mugen will work together with Honda. "MUGEN and Honda will proceed to work together to explore the future potential around the World for electric motocross machines." More from Autoblog.com.

This marks the official beginning of Honda's active involvement in the program, and seems to indicate that the manufacturing behemoth will take aim at the motocross segment of the market first. That's something of a departure from expectations after its previous electric efforts have been limited to scooters like the EV-Cub concept they've been teasing us with since 2009 (and which might, finally, make it to Japanese streets in 2018), or sportbikes like the RC-E from 2011. We can't help but wonder if there will be a Shinden Nana (seven), or if there is, whether it will be designed for track or trail.

What we do know is that this year's Shinden Roku is a mild evolution of last year's machine rather than the fresh-from-the-ground-up build Mugen have made in the past. While it does have some minor differences in the bodywork fore and aft and weighs in 4.5 pounds lighter at 248 kg (546.7 lbs), the motor appears to be the same unit used in 2016 with output – 120kW (160.9 horsepower) with 210 Nm (154.89 pound-feet) of torque – apparently unchanged.

Dax Shepard is a Gear Head Like the Rest of Us

Lane Splitter has a really cool interview with Dax Shepard, star of the movie Chips, the remake of the 1970s and ‘80s TV show about motorcycle cops in California. Shepard, who grew up in Detroit, is apparently a gear head, and even rode dirt bikes growing up. The entire interview is worth reading, but here are a few snippets, which even include a mention of our friend Dave Castillo.

A: “Have you had any particularly scary moments on the bikes or memorable wipeouts?”

D: “Yes I’ve had many, many many memorable wipeouts. The one that was probably, well the one that got me off motocross was I was riding down a field in northern Michigan and I was in waist-high grass. And I was going pretty fast. I had ridden down that field the day before and someone had cut down like 20 trees and stacked them up and they were just below the grassline.

“So I hit that flying, went way over the handlebars, and I broke all the tendons that hold your clavicle in so I had to have the end of my clavical cut off and they drill a hole in it and there’s a cord that’s pulled through a hole now in my scapula and it’s all like cinched into there. And that blew. That was like, I was out for a year, basically. I couldn’t work out or anything so that’s when I switched to… a cage.”

“I’d also been hit twice in LA by cars, uh, which sucked. Yeah. I haven’t been hit in a long time, knock on… knock on something.”

A: “So how much of the riding in the movie is you and Michael [Peña]? I’m imagining you had some stunt guys for part of that at least.”

D: “Oh god yeah, we had some of the best riders in the world on the movie. This uh, this dude Dave Castillo who’s like a motocross racer who can do absolutely everything I was so jealous of him the whole movie.”

“Yeah it was a bit of a self-esteem bump because Hit And Run I did 100 percent of the driving, because I can do anything in a car…. I can’t do anything on a motorcycle. So I couldn’t jump a hundred feet like they did. I probably couldn’t drive over a car the way Dave Castillo just rips right over a car. But, I wheelied, I did front endos, I did the hill climb, I rode up and down staircases, I dragged a knee, I did, certainly, I think more than... most actors can do.

“And Peña had never ridden, poor guy, he learned to ride four weeks before we started shooting and I just threw him on the 850-pound cop bike, put him on the highway and said ‘alright let’s do this three-page scene.’”

We Need More of This

Shameless plug alert: If you haven’t read Jason Weigandt’s piece on Jason Anderson in the May issue of Racer X Illustrated, I recommend picking it up. It’s a great look at the Rockstar Energy Husqvarna rider. Anyway, you have to love this recent post by Anderson on his Instagram account.

Just When you Thought Red Bull was out of Insane Ideas

They pull you right back in.

I’m totally late to this, but whatever, it’s super cool.

It's Wednesday. Get over that hump. pic.twitter.com/TqEm1Iql9z

@RyanDungey someone in your RB brought me a signed jersey here this weekend @ACSupdates. Thanks! Awesome addition to my collection.

Baz Dude on a Bike

Ahead of the opening round of MotoGP in Qatar, Franck Millet Communication released a sweet video of Ducati rider Loris Baz shredding some ice in preparation for Qatar. These are some amazing skills on a bike we’re witnessing. (By the way: Baz finished 12th last weekend in Qatar.)

I’ll never pretend I know the first thing about fashion. Something tells me t-shirts and jeans aren’t forward thinking enough. The other day, I spotted some photos on my fellow Racer X colleague BJ Smith’s (@wewentfast) Instagram account. It was photos of the latest NY Times Style Magazine (I’m hoping his wife is a subscriber) and it had motorcycles and apparently “motorcycle style?” throughout. The clothing part I don’t get, but man, look at these sweet bikes.