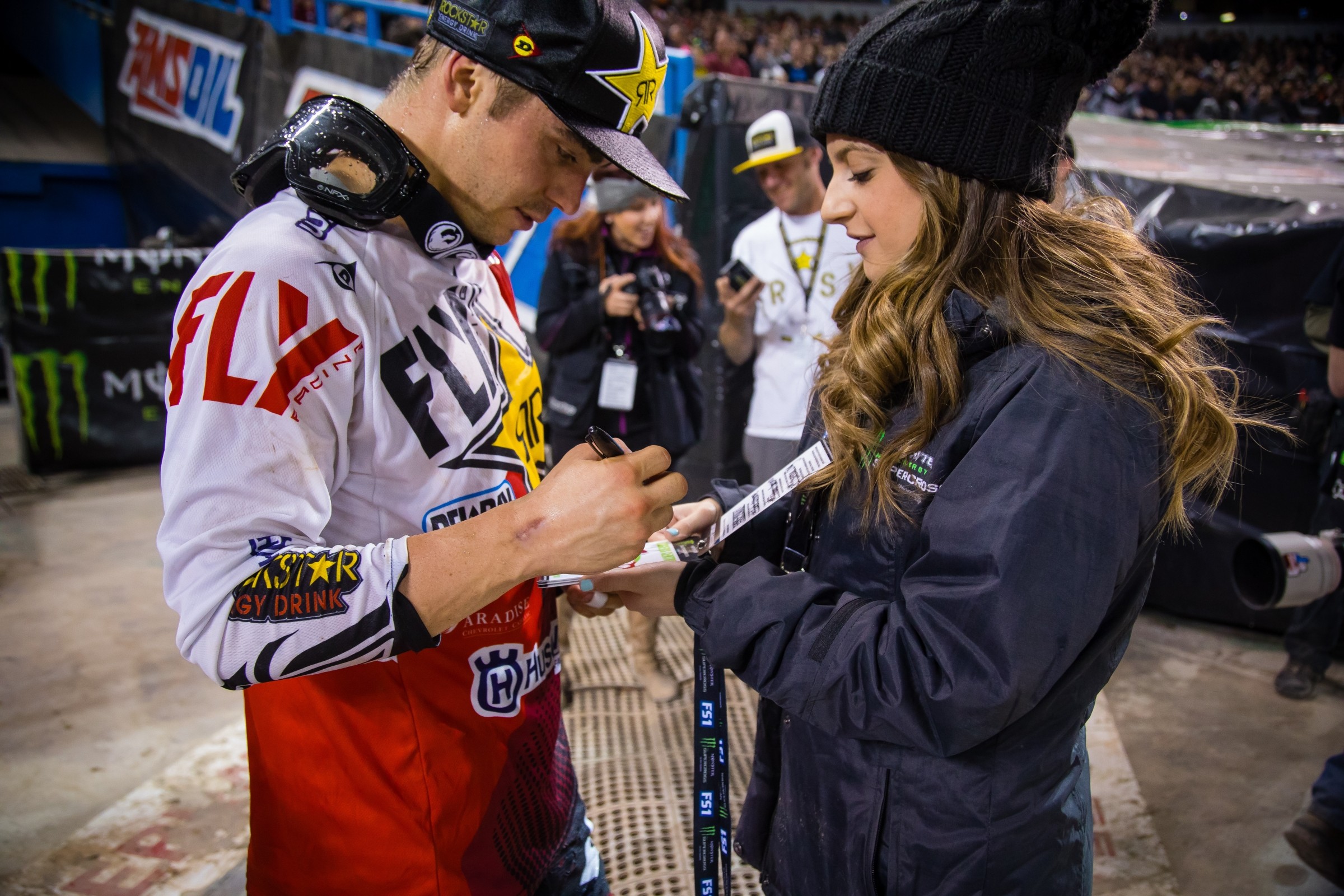 A dirt bike stunt performed in Riverside County has drawn the ire of the California Highway Patrol and Riverside County Sheriff’s Department, who are launching an investigation according to CBS Los Angeles. In the video, Instagram user Kyle Katsandris jumps over the 60 Freeway in Moreno Valley while traffic is passing underneath. While we don’t know Katsandris’ skill level, assuming he’s a good rider (which he appears to be), the stunt, while stupid, isn’t as dangerous as many unfamiliar with the sport probably think it is. Anyway, Katsandris could now be in trouble after posting it on the Internet, when if he just would have kept it to himself would probably be getting away with it. This is a similar to what happened with former racer Topher Ingalls (who is now a real estate agent) last year when he filmed a sick video riding down the highway on his way to work. You can watch Katsandris’ video below and judge for yourself.

The key board warriors were out in full force. Where are you now #katsandrisleap #nolimits

At 44 years old, John McGuinness is still competing at a high-level in road racing. Admittedly, he doesn’t, and hasn’t, ever been a big trainer, but that hasn’t stopped him from racking up 23 wins at the Isle of Man TT. In their recent “A Life Behind the Bars” feature, Honda profiles McGuinness’ childhood, how he made a career in racing, and more. It’s really interesting, even if you don’t like road racing. Personally, I loved this comment about training.

“It’s difficult for me to sit here and say why don’t you train? Well I can’t answer it. Why don’t I train? I should train; it’s not hard. You know, instead of eating two pies, eat one pie. You know, it’s not hard, but I just can’t do it. It does needle away deep down at me. Could I have been faster? Could I have achieved more if I was a little bit lighter and a little bit fitter? But when I try that gym regime, when I try doing that it just takes the fun outta me life. Standing on the podium at 44 and being a bit of a chunker … it does feel sweet.”

Speaking of McGuinness, he and his Honda teammate Guy Martin will ride the Mugen electric-motorcycle at the Isle of Man TT race this year. Mugen has won the past three SES TT Zero races at Isle of Man. More from Ultimate Motorcycling.

McGuinness is no stranger to Mugen machinery; he won the 2015 SES TT Zero race, setting a new lap record that holds today of 119.279mph. McGuinness missed out on victory in 2016 TT Zero due to bike issues; Mugen’s other rider, Bruce Anstey, claimed victory. The only rider who has more TT wins than John McGuinness is the late Joey Dunlop, who has the record at 26.

As for Martin, he took a year off from international road racing, but returns in 2017 with a fresh approach. Martin will chase his first-ever TT win, and both riders will look to break the 120mph barrier in the 2017 SES TT Zero class.

Team Mugen says Both riders will fly to Tokyo in April where they will meet up with their 2017 TT Zero machines, and the dedicated team behind the machine. The Shinden Roku electric motorcycles have been extensively developed from the 2016 race-winning machine, (Shinden-Go) and will be unveiled at the 2017 Tokyo Motorcycle Show at Tokyo Big Sight in March, 2017.

You’ve probably never heard of SWM Motorcycles, but according to Asphalt and Rubber the Italian brand could be coming to the U.S. The Milan based company produces off-road motorcycles, and many of its members are former Husqvarna employees, prior to its sale to KTM. The company also uses pre-BMW Husqvarna engine designs, per the report.

But, with a new production facility, support from the local government and worker unions, along with Chinese financing (from the Shineray Group), SWM Motorcycles has taken on a new life with a promising future.

With 10 models listed on its website, and more planned, this tiny Italian marque is starting to punch above its weight class. As such, SWM Motorcycles is on-track to sell 6,000 units in the 2017 model year.

Most of those machines will be from SWM’s 300cc and 600cc enduro lineup, though the 501cc supermoto certainly has our interest piqued – it helps that it looks suspiciously like a Husqvarna SMR 510 supermoto.

David Emmett of Moto Matters has an interesting piece on how Dorna cultivates talent in MotoGP. The goal for the Spanish-based operation is to find talent all over the world, not just in Spain. In the last 10 years, of the 30 champions, 16 have been Spanish. The movement is more than just the Red Bull Rookies Cup, as Dorna is helping series all over the world, even in the U.S. with MotoAmerica. They’ve also set up a talent series in Asia and the UK, among other places. Moto Matters spoke with the CEO of Dorna, Carmelo Ezpeleta, about finding talent and more.

So it's an investment in the future? Grow the popularity of the sport in Asia, and that means more TV revenue in the future from Asia?
"It's all connected. Obviously, the world championship will be more popular if there are more people from more nationalities. The idea that many people have been talking about, that MotoGP is only about Italy and Spain or whatever, but there was a time when it was completely different. It was just Americans or Australians, etc. What we tried to do is to consolidate everything everywhere. But we need to have a base."

"For example, you mention Australia. We are looking a lot at Australia, but first, for us, it's not easy to do a championship on the other side of the world! But something we have been doing since 2015, in the Asian Talent Cup, we admit also Australians. Then it's something to reach first. Not many of them have been successful, but we will continue doing that."

If you want to read more, check out the full article.

Weirdest broadcast contract yet: MTV to broadcast MotoGP in Finland. What? pic.twitter.com/Q54qnwoiIN

This week, BT outbid Sky to retain the exclusive broadcast rights to the Uefa Champions League and the Europa League. Yes, you don’t care about that. I get it. But, there is something interesting to this announcement. The deal, which will run through 2020/21 season and is reportedly worth £1.82bn, per The Drum, will no longer be shown on free-to-air TV at all. So BT is showing all highlights on social media—for FREE! This is interesting, as some leagues like the NFL for example, are very stringent about content being shown on social. Here is more about the deal from The Drum.

To compensate for the lack of terrestrial coverage, while also catering to the evolving nature of sports viewing habits, BT Sport will make video clips and a weekly highlight show available for free on social media. It will also show the Champions League and Europa League finals free on social media as it did last year.

While no specific platforms have been named for streaming of the finals, BT Sport could partner with YouTube again given it used the viewing data from those fans who watched last year's final on the streaming site to retarget them the following week.

The decision to offer more content, such as clips and highlights, on social media comes in response to a wider shift in viewing habits which has seen audiences increasingly opt to watch highlights on Snapchat and other social platforms over traditional TV broadcast means.

See … what had happened was

This might be the greatest tennis serve I've ever seen! pic.twitter.com/Aeb8h7bvBc

A new original series about Le Mans is coming to Amazon. Held annually since 1923, the race is the world’s longest running sports car race in endurance racing. According to Deadline, the series, titled Le Mans: Racing is Everything, will be released globally. No release date has been announced.

Le Mans: Racing is Everything will offer access to the entire 24 hours of the race, while exploring the storied legacy of Le Mans and the generations of drivers who have braved the course. The series will show as Porsche, Audi, Nissan, Toyota, Aston Martin and Rebellion teams race to build their cars and compete in the single-day sporting event. Among the featured drivers are Australian Formula 1 legend Mark Webber; German three-time Le Mans champion André Lotterer; Nico Prost, son of legendary Formula 1 driver Alain Prost; and English teenage gamer Jann Mardenborough, who at the age of 19 was given a slot on Team Nissan after winning an e-Sports racing competition.

“Fans are consistently thrilled by the excitement and danger that is the annual Le Mans race. Le Mans: Racing is Everything will take that excitement to the next level, giving Prime members behind-the-scenes access to what it takes to win this singular event,” said Conrad Riggs, Head of Unscripted, Amazon Originals.

Per the Sports Business Daily, Facebook and the World Surf League have signed a one-year deal that will see the social media giant carry every event this year. Facebook already has deals to carry 46 Liga MX games and NBA D-League games. Per the report, “The events also will be available via WSL.com and the WSL app. Some local TV stations also will pick up rights to certain events.” More from the report:

We feel Facebook is a natural home for sports content, including live games,” said Facebook Head of Global Sports Partnerships Dan Reed. “Early experiments with these events on Facebook have delivered great results for fans, broadcasters and rights holders.” As part of the WSL deal, the league will make its '17 Champions Tour men’s and women’s events and Big Wave Tour events available live on its Facebook page. All told, Facebook plans to livestream 800 hours of WSL coverage this year, starting next week with the Quiksilver and Roxy Pro Gold Coast from Australia.

Figure 8 Racing is a thing