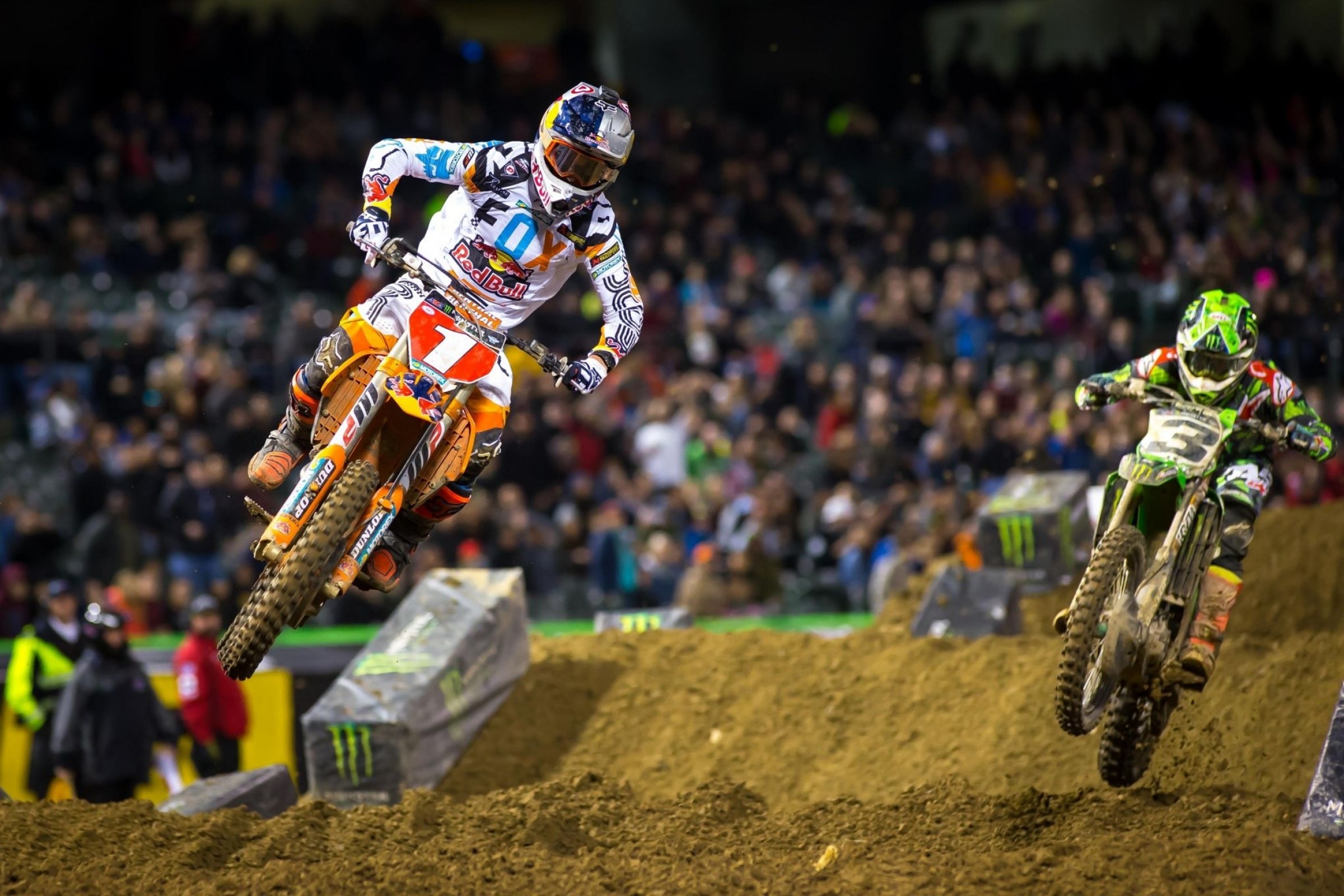 450 Words We Got Ourselves a Series!

A chase playoff style format didn’t come to Monster Energy Supercross this year, and everyone was happy. We live in a world where no one can agree on anything, except for one thing: NO EXISTING SUPERCROSS FAN wanted the Chase format in supercross. Whenever I’ve floated the idea out there, I get universal negative feedback, and universal anything is quite rare these days. (And, for the record, I’m personally fine with a playoff format, but I’m here to tell you what I hear, not what I think.)

As luck would have it, the current non-playoff style format has worked like magic this season. The last five seasons have been totally void of any late-season title drama. But Eli Tomac is on a tear now, so we get to buckle up for a six-race shootout for the championship: Tomac versus Dungey, with a perfect 12-point buffer between them. If they were tied in points right now, Tomac’s recent run would make him a clear championship favorite. But the man with the most speed and wins is working with a 12-point handicap, which creates an absolutely brilliant scenario down the stretch. This could easily go either way, and we need to celebrate that. This is what we dream about in November—two high-end dudes squaring off, with pressure and tension ratcheting up by the week. Since it returned to the schedule in 2014, the East Rutherford round of the series, the next-to-last race, has basically been a title-clinching round. There’s a good chance the points could be tied going into that race this year. Can your heart even take it?

You can see it in the combatants. Dungey shrugged off the pressure and challenges this year, he’s grown comfortable in his own skin and his role as champion. But this weekend finally produced some cracks—it wasn’t 2011 Dunge, but no doubt frustration is starting to mount. I’ll argue to the death that Dungey never “takes a podium” but instead tries to win and sometimes merely finishes on the podium. He is not happy right now.

“I’ve been in his [Tomac’s] position, behind Ryan Villopoto for four years, and I don’t like it,” Dungey said on Saturday night. “It bothered me and it upset me a lot, to the point where I hated the sport. I didn’t like it at all. I wanted to be done. So bringing that back, I work too hard not to get the top result. We all do—myself, the team, the people around me, everybody. It’s a complicated question you’re asking, but it’s very simple as what we want to accomplish.”

Meanwhile, Tomac, the cyborg, the man who stares holes through walls and competitors, is on his game. He is the monster that movie makers create with CGI—go and try your puny human weapons on him, he simply shrugs them off like King Kong eating airplanes. Tomac is back to full beast mode, and that’s scary, but we also know he’s gotten to that level a few times before and ended up throwing it away. Plus, the 12-point hole means he must be nearly perfect down the stretch. He doesn’t have to win every race to win the title, but he has to come close. Finishing a season with 12 wins in the final 14 races, and nine in a row, is very, very, very hard. Plus, one bad result and Dungey is back in control.

Nothing is certain from either side.

Plus, we’ve got spoilers. I’ll knock on wood heavily here and note that this year’s 450 class has been very fortune on the injury front. Did you hear what I just said? This is not one of those years where everyone has gotten hurt. The 450SX field is very healthy. The top 16 spots in Indianapolis were filled by factory-supported riders, and only two of them (Dean Wilson, Jake Weimer) were replacements (Wilson replaced Christophe Pourcel, Weimer replacing Weston Peick). That’s it, people. Ken Roczen, Christophe Pourcel, and Weston Peick are out. Once Cooper Webb returns to competition this weekend in Detroit we will have 15 factory bikes on the track with the exact same riders that were supposed to be on them at Anaheim 1. That’s great!

And this matters because riders like Musquin can steal points from Dungey or Tomac, which further complicates the math. And while Dungey and Tomac can salvage points from way, way back, it’s always more daunting to get through Seely/Anderson/Grant/Millsaps/Baggett/Webb/Reed/Bogle/Tickle et al. than it is against a bunch of fill-ins or hurt dudes. Dungey’s last-lap gasp against Seely at Daytona was heart-stopping. Expect the drama to continue.