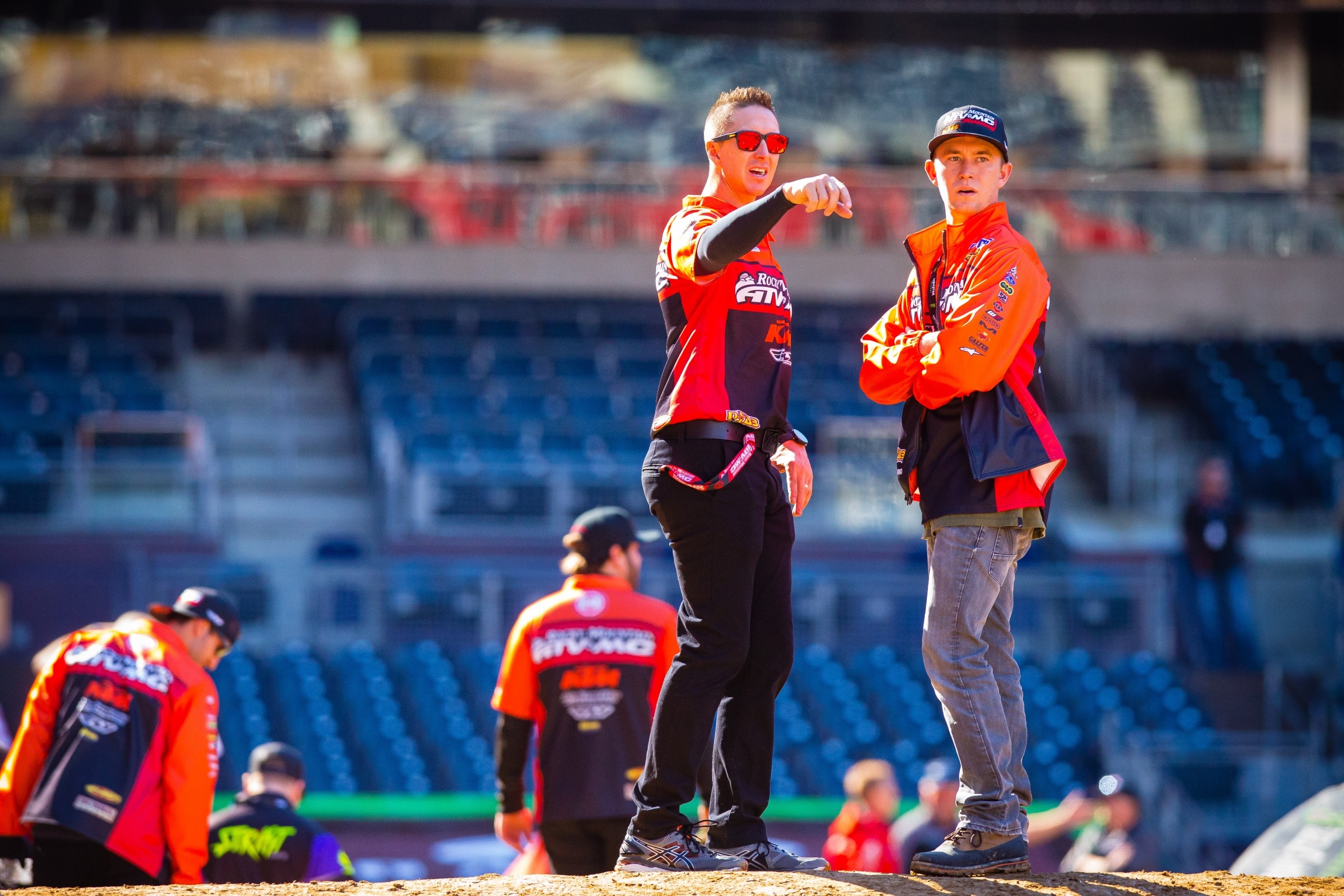 Between the Motos Michael Byrne

Like a lot of teams in the pits, the Rocky Mountain ATV/MC-WPS-KTM squad has an ex-racer helping out. Michael Byrne, who once rode for the team, has signed up for 2017 and beyond to help out owner Forrest Butler with running the team as well as work with riders Davi Millsaps, Blake Baggett, Benny Bloss, and Dakota Alix (who is filling in for Bloss). Always friendly and one of the fastest guys to never win a SX main event or a MX overall in the U.S., I caught up to Michael before the chaos started in Indy.

Racer X: First off, you’re back with the team. You raced for them, helped Chad Reed out, and now you’re back. How’s it been going? Blake Baggett, Millsaps, Bloss, the whole deal.
Michael Byrne: It’s been going good. Obviously my role here is a little bit different to my previous roles with Chad and stuff. It’s more of a management deal but I obviously still get to work with the riders. It’s been fun. It’s been good. Had a few up and down races, but I think all in all we’re doing pretty well.

Baggett’s been fast every weekend. I think he’s a bit of a surprise. What do you think?
We did a lot of work, that’s for sure, in the off-season. He’s great at taking advice and putting it on the track and making it work. We worked on a lot of technique stuff with him, and I think now that he’s picked it up, now it’s just trying to harness that speed, so to speak, and not tip it on the ground.

It’s impressive. He’s on the board almost every practice, and if he gets knocked off or whatever he takes a break and gets back on the board, and I don’t remember Blake Baggett ever doing that during his Suzuki days.
No. His speed has definitely been impressive. It’s been great to watch, that’s for sure. Like I said, now it’s just trying to harness that and have him now be able to control that for 20 minutes and not make a mistake or fall down. Toronto he fell twice and still got fifth. The speed’s definitely there. It’s just him now getting used to that speed, and I think his confidence is starting to show that.

Millsaps is a bit like you, at the end of your career, older guy. Tons of experience. He has podiums and stuff. How is it working with a guy like that? Do you kind of let him go and do his thing, or do you jump in when you need to?
Yeah, my job here on the team is obviously to help the team run, and help Forrest run the team, management-wise. If the guys want my help I’m here for them, but it’s not a necessity. It’s nothing that we’re forcing on them. If they need me or if we feel like they need us, then we step in. Blake came to me straight away and wanted my help and my advice. Davi kind of had his own thing going, so we kind of leave them to do what they want. They get the best of both worlds if they want.

To a certain extent—if they get to where they’re doing their own thing and it’s not working, then we’ll step in. In the end they’re our investment, so we have to make sure that works.

Dakota Alix is new on the team. How’d that deal come together?
I don’t really know the ins and outs of it. That’s obviously Forrest’s side of it. I just met Dakota yesterday. He was in California testing all week. It’s a good opportunity for him to step up onto a factory bike and see how it goes.

I did a story on Andrew Short’s starts a few years ago, third gear, that you helped him with. Have you thrown that out there to these guys?
Blake and I were joking around this week because I said I’m going to get a bike this week and I’m going to come out and we’re going to do starts. As usual they’re all pretty cocky. They’ll say we’ve got you covered. Andrew was definitely unique. His third gear, there was a lot that was involved in that with gearing and stuff. But we worked on the technique and the RPMs and whatnot with that, but that was all just him trying to figure that out. It was good. We’ve been working on starts with Blake. We weren’t really working on them that hard at first because we thought he was doing pretty good, and then he started struggling a little bit so then we started working on it again probably a month ago.

You’re lifelong buddies with Chad Reed. You helped him out the last few years. You’re basically a competitor to Chad now with Millsaps and Baggett. You were involved in Chad’s program inside and out for two years so how’s that?
I don’t know. When the guys go on the track that’s their deal. If Chad’s going to beat them, he’s going to beat them. If they’re going to beat him, whatever. It’s definitely a little bit different. It’s hard. We don’t have the communication that we did because obviously sometimes I guess it’s hard to separate work and friendship.

I think it’s not just you, it’s everybody in these pits. It’s like you’re on this team or this team and forget the friendship which sucks.
Yeah, I feel like a lot of people in this industry have a hard time when you get away from racing they still want to talk about racing instead of just someone’s friendship or whatnot. It’s hard, definitely like you said, in this industry to separate that. It’s been a little bit like that with Chad and myself, but we’re getting through it. It is what it is. It’s just hard. Our life revolves around racing.

How’s fatherhood?
Fatherhood’s been good. It’s definitely a great life-changing experience, especially when being a racer, it’s not about me anymore. It’s all about the little guy. I’m just chopped liver now I guess. It’s just the wife and the baby and me and the dogs are over here in the corner. I’m lucky. I’ve got a great wife and she’s doing a great job with the little guy while I’m away. It’s an awesome experience.

No Loretta’s for you this year?
No, the boss won’t let me. I needed a little help from the Coombs to skip the qualifiers and I wondered if they could just have an ex-pro class at Loretta’s. The whole qualifying thing gets tough because I have to be at Hangtown or Glen Helen I think when my regional is on. Unless I don’t go to work I won’t be able to make it.

But you would do it? You didn’t give up racing or anything?
No, I would like to race it, for sure, honestly. But like right now we’ve been so busy, I haven’t ridden a bike since November which is the longest time in my life. I think I’m going to get a bike next week though. I need some riding therapy.

You’re here and Shorty’s over at Honda helping out. It’s something new where the older riders are coming in and helping out teams and riders individually. You guys have a lot to offer though I think.
Yeah, I think we understand also what the rider’s going through and what he’s thinking and maybe what his mentality is. If he’s feeling something out there that he can’t translate, but maybe I can.

It’s a good idea. Like, if I’m Forrest or any of these team managers, I’m getting a guy that’s been on the box and raced at the highest, highest level to help my guys.
I just feel like there’s more of an understanding there. If you have a gym trainer or something and that’s all he does, he doesn’t really know what you’re feeling. He can think he knows, but unless he’s actually been out there riding the track and know how it develops and how it breaks down or what the bike should feel like…. There’s just so many areas where I think you can guide these younger guys, or anybody really. You can always communicate and make progress. I feel like you’re making better judgments on changes when you have more heads that have actually done it before.

Or you’re not making changes. You’re not freaking out over a bad practice. The opposite is a calm hand when the rider is freaking out, too.
I’ve done that a few times with Blake. He’ll come in if he wasn’t on the board and he’d be like, “Man, I was 10th.” Well, that’s okay. Worry about it later. We’ll download the video. You’re only there because of this. It’s a rollercoaster for sure. I think maybe because I’ve ridden the rollercoaster it helps. It’s not the friendliest rollercoaster all the time so it’s nice that I can probably see it coming before it actually blows into something bigger. Like you said, it can go both ways. You’re trying to control them emotionally, or you’re trying to make things better. So I think it works out pretty well.