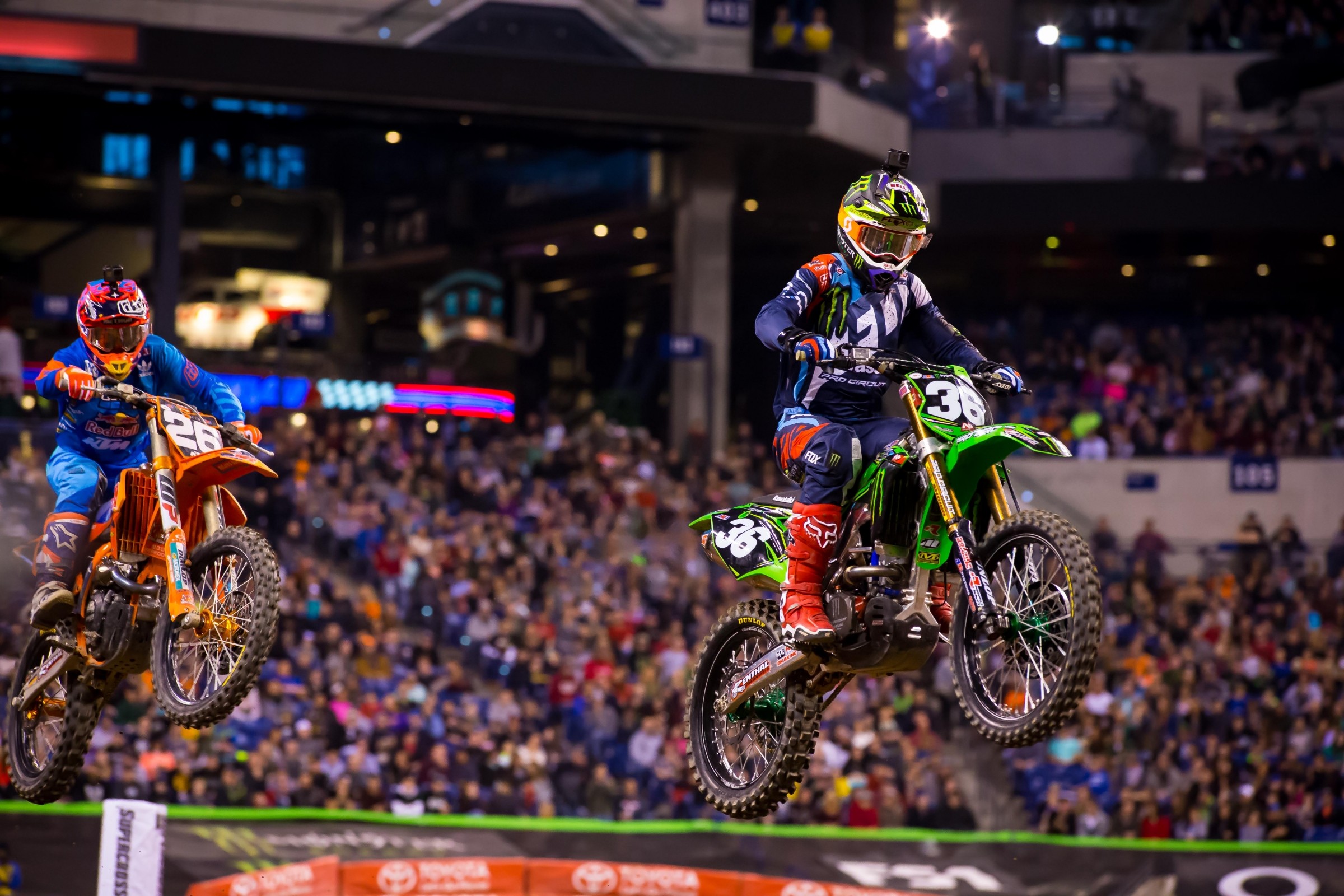 Racer X: What happened there through those rollers? I think I saw Baggett do the same thing in the 450. Was it just something there at the end?
Alex Martin: Yeah, it’s really just a case of maybe not being smart enough out there. Actually in practice I made the same mistake two times in the last practice. I crashed twice in that corner. It’s just because you’re coming off the finish line, you wheel-tap the three and then you go quad with a lot of speed coming into that corner. I don’t know what lap I crashed exactly in the main, but I was just getting a little tired. Arms were a little rubbery, and the front end washed on me. It sucks because I felt like I had third down. Jordon [Smith] was there obviously, but I felt like I could have held that spot. Luckily, fortunately, the Tuff Blocks almost slowed me down. It pitched me pretty quick. I was able to get back up still being fourth, so I was pumped about that. But I had Adam [Cianciarulo] kind of breathing down my neck. So I definitely couldn’t just throw the towel in—I had to keep going to hold that position down. It was a tough main event. We did 20 laps.

Probably the most you guys have ever done.
Yeah. I think Atlanta was 18 or 19, so it’s a PR [personal record].

Does it feel different? It’s still timed main events, but does it feel longer because you’re clicking off laps?
You’re so zoned in so you kind of don’t think about it, but I’d be lying if I told you I don’t think about it at all. Like I’d say probably halfway through I need to tell my mechanic … because I like to see minute-wise where we’re at. You can’t look at the tower anymore to see what lap you’re on. That’s what was nice about having that tower with laps is you could see lap 12, okay I’ve got three left. You can’t really see the time on the finish line. It’s just not in a good spot typically. So sometimes you’re out there and it feels like you’re in no-man’s land. You’re like, what are we doing out here? But overall we’re all fit and we all train, so I’d say top five, it’s not like you can just wait until lap 18 to make a pass. We’re all suffering the same amount.

You mentioned arm pump to [Jason] Weigandt last weekend. Is it because of the timed main events? I don’t think you’ve ever had it before. What would bring this on? What’s leading to it? Do you even know?
It has been a career-long problem for me. I don’t really publicly complain about it too much. But in Daytona Weigandt just caught me after the race and I was heated. I have been struggling with it worse than normal this year. I cut quite a bit of things out of my diet this week, and just therapy, trying to work the arms. Last resort I guess I can always get arm pump surgery, but I’d like to avoid that if I could. It’s been frustrating but I think it’s not just one thing, whether it’s supplements, eating, training, and bike setup. There are just a lot of things that you can factor in. Confidence, obviously. But when you have a guy that’s like we’re all as fit as we are and you get it in like four or five laps, then you’re like, ah … it’s frustrating. At Daytona I think I got it on lap six or seven. I was just like, what’s going on here?

It’s not like it’s with setup or something you can focus in on one problem. Arm pump, most people don’t even know, and you’ve got to go through a bunch of different things to maybe figure it out. Does that get frustrating where you’re like, “I’ve changed everything. I’ve changed this, I’ve changed this,” and none of it’s working? Does that get frustrating?
Yeah, for sure. Especially in the moment when you get it. In outdoors it’s nice because I’ll typically get it in the first motos, but you have 35 minutes and for me I kind of blow it out a little bit. Then second motos I’ve really rarely gotten arm pump. So it’s just one of those things you kind of learn to deal with and you learn to ride with it. I can tell you I’ve gotten pretty damn good with forearms just fully locked solid.

Does it happen in testing and stuff to where you can kind of figure out how to ride through it, or is it just when you’re coming out here?
No, and that’s the thing … you could easily say it’s mental, because I really don’t get it ever in practice. So it’s maybe a couple things. The intensity is not high enough in practice, or the tracks just aren’t as tough. I’m sure there’s times in the main event where I probably don’t breathe for three minutes. So there’s a lot of things. You can’t just point the finger at anyone really than me. It’s something I can work on.

Racer X: How’s the knee first of all?
Adam Cianciarulo: After the practice Zach [Osborne] and I got into it there, both sides. It really wasn’t that bad. I just kind of jumped off the track and I planted my leg a little bit and hyperextended it. Man, it stung for a minute. It was God-awful pain. Even like the first 30 minutes after it I was like, “Man, there’s no way I’m going to be able to do it tonight.” But luckily we were able to get decent enough for the practice to throw down an okay lap. I think I was ninth or 10th or something like that. Felt decent in the heat race, got a start. The knee started to loosen up at the end. I actually felt better at the end. I was happy with third. The main event, too. I didn’t get a great start and got stuck behind [Dylan] Ferrandis there in the beginning. Those guys kind of gapped me, but I’m not too bummed on my ride to be honest with you. For what we were dealing with with the knee, I think if I would have had a camera following me all day and seeing the knee, people would be like giving me hugs right now. It was pretty terrible. Just to get this one over with felt like I rode good for what I had, to get a fifth. We’re 18 down. That sucks, but this thing’s going to go all the way down to Vegas. The knee should be good after a week.

Obviously you haven’t had an MRI. Do they fear structural damage or anything?
No. I haven’t really got any indication. I didn’t even really want to know. If I could ride, I was going to ride. There’s no question about it. If I could ride tonight I definitely can ride next week. I might not do too much riding this week, but I should be ready to fight for a win by next weekend.

So when this happens are you just like, “Man, again?” Does that cross your mind at all?
Not at all, no. I don’t want my quality of life to go down because I’ve been hurt. Shit happens. Shit is always going to happen. No matter if I’m bagging groceries at Publix or racing supercross. This isn’t going to be the last time I tweak a knee or twist an ankle or something. When stuff like that happens to me I just look at it as something I’ve got to overcome. I think everything happens for a reason. I think I’ve been through plenty worse than what I had to go through tonight. I’m proud of myself to fight through the pain and kind of see where we were after that practice to where we are now. It’s pretty good.

Take me through what happened there in practice [with Osborne] from your point of view.
So I thought right there in the beginning, Zach is known to be an aggressive rider and that’s cool. I think we were going through that little rhythm section there on the side and he just kind of jumped … I looked at some footage. I saw an Instagram and it didn’t even look like he hit me. But just from my point of view, to be honest, he’s kind of already on probation in my mind of somebody that’s kind of sketchy and a little bit not scared to run it in. So he came close to me there and I was like, yeah, I’m not about to let this guy just run me for the rest of the season. So I wanted to come in aggressive on him. I didn’t torpedo him or anything. I crossed over into his rut and bumped him. He had every right to retaliate. I guess I should have saw it coming. He got a really good drive through the whoops, we saw on tape. I think he definitely took it up a couple notches with the pass, for sure. But I’m not going to cry about it at all. I don’t want anybody to think I’m whining or anything. It’s an aggressive sport. I know we both got warnings from the AMA on it, and I think going forward we should be able to leave that stuff for the race. But I’m not scared of a little rubbing. Of course it didn’t turn out great for me, but just more so because I jumped off the track and kind of hit my knee, and it wasn’t caused by the hit. So I’m not too bummed on it.