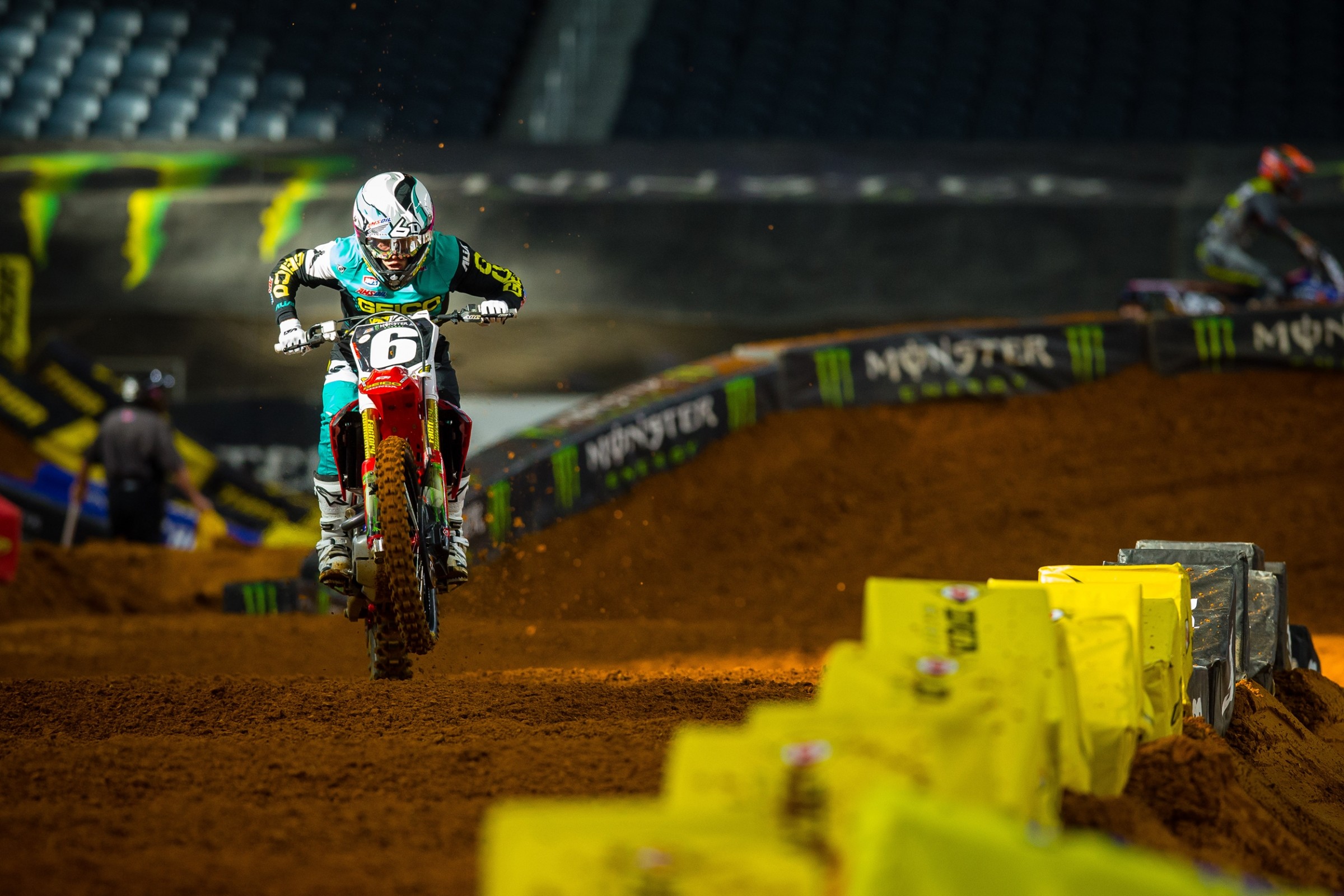 GEICO Honda swooping up Jeremy Martin from Yamalube/Star Racing Yamaha (or, perhaps it’s more accurate to say Jeremy wanted to leave Star) was the biggest coup of the off-season in the 250 class—but it hasn’t paid dividends yet, as J-Mart’s supercross season has been a wash with bad starts, crashes, and two missed races with injury.

He’s ready to hit the reset button starting with a one-off 450 ride this weekend at Daytona, on Ken Roczen’s CRF450R. How will it go? And what about the rest of 250SX? We rang up Jeremy yesterday to find out.

Racer X: Okay, Jeremy, of the zillion private tracks in Florida which one are you riding?
Jeremy Martin: I’m riding at The Nest.

Okay, the Nest. That was [Grant] Langston’s, then it was [Ryan] Villopoto’s, now who runs it? How’s it going there?
You know last year I spent a lot of my time in California, and California is California. I wanted to get on the East Coast in 2017, so I approached [Mike] Grondahl and his crew and they let me ride there. But now I believe Jason Baker is working on buying it.

Such a fun productive day today with the whole @honda_powersports_us crew. Track was prime time thanks to @dreamtraxx #ridered

Have you ridden there a lot in the off-season?
A little bit, but honestly I’ve been out in California most of the time, I had to test and get the setting on the bike, and then I’ve raced the West Coast series. Definitely not as much East Coast as I want! And actually after Daytona I’ve got to fly back out to California and do some work on the 250. I’ll be out there for about of week, then I’ll do some more riding to get ready for outdoors and some more work on supercross.

You back to Florida for the summer?
Oh no, I’ll be back in Minnesota! Just like last year. Minnesota will be there for me forever.

So how long has this 450 deal been in the works?
My agent, I think he had been working on it for a while. I was just worried about working on the 250 program to get that GEICO Honda on the box. But Lucas [Myrtle, agent] was working on it slowly in the background. But it was always just going to be for one round, at Daytona.

You’ve got some history at Daytona. You won last year and that was also your first podium.
Yup, first podium and then I won it last year. So I’ve had some good memories from that track.

Is this just saying that this type of track works for you?
You know, I think so, but I just like it because it’s a mix. You get some high-speed sections and you still get the technical jumps. Maybe it’s not as supercross-y as a regular supercross, but I just like it because it’s different. I like it myself, and I bet the guys who are racing the 450s all season, they really can’t wait to get out there a break it up a bit. We’ve all been riding supercross for a really long time now.

It would seem to me that Daytona is actually more challenging than every other race. It’s rough and tiring like a motocross race, but you still have to be precise and do supercross obstacles like on-offs and triples and rhythm sections.
Daytona is not an easy race at all. First of all, it’s hard to see some of the lines sometimes, it’s that deep, black sand, so it gets hard to see in the dark. And there are twice as many bumps and the bumps are twice the size. Then like you said, you have the technical supercross jumps, too. It’s not easy.

So how do you feel on the 450? Do you have any idea at all how you will do?
I feel pretty good on it, but I’ve only ridden it about five times. It’s just a fun one-off deal. I was actually pretty bummed I was going to miss Daytona, so getting this chance is pretty bad ass. I have to thank Honda for that opportunity. It’s just going to be fun. So I just want to mix it up with the front-runners and see what I’ve got.

Are you riding with some 450 main event guys? Does that give you an idea of where you might stack up?
Well, I’ve ridden with Cole [Seely] a little bit, and I’ve ridden at Milestone on the public track and there were a couple of good guys out there. Those guys are definitely fast, that’s for sure!

Okay, I’m going to ask you a hard question. Are you ready?
Yeah.

Okay, here it comes. People are going to say, “Oh, J-Mart, he’s too short to ride a 450 well.” Can you speak your peace on this?
Well, people said I was too short to ride supercross, like I’d never win supercross races, or I’d never be able to skim through supercross whoops. But I’m just fine in them. So you can’t really use that. Hey, Ricky [Carmichael] was a shorter guy, too. We’ve ridden some pretty big whoops down here at the Nest and I hit them just fine.

Okay, good answer. So are you working out of the factory Honda truck this weekend?
Yeah, I think so. I’m pretty sure I am.

Wait, you’re not even sure? You don’t worry about those things?
No, not really. I let other people handle that stuff and I just roll in.

I think you like the work part of this job. You like the riding and the training part. You don’t care about the other stuff.
Yeah, I just work on my part and I let everyone else do the other things.

Can we talk 250 West for a bit here? Maybe you’d rather not—it hasn’t worked out well at all.
Yeah, that’s a tough pill to swallow. I put a lot of time into what I do, and so does the whole GEICO Honda team. They put in a lot of work, too, and I can’t say enough good things about that team. I learned a lot about the Honda in the off-season, but then I learned even more when we went racing as well. So I’m doing the 450 deal right now, but when I go back to California to test again on the 250, I think it’s going to be like a fresh start, because I really learned a lot about just the Honda itself. I’m out of the championship, no question about it, but I’ve still got three weekends left to try to go for the win, and that’s huge. I want to get one bad.

That’s good to hear. Because it would seem like you could easily just have the wind out of the sails for these last three and be fully focused on outdoors. But you have some unfinished business.
I’m a racer, and anyone who is competitive, anytime you go to the line, there’s an opportunity to go for the win. Anytime I go to the line, I want to go for the win. Some people might say I’m better at motocross, but I’m a damned good supercross racer, too. You do notice some guys do ride one better than the other. But I feel like I’m good at both, and I’m able to win races and contend for championships in both.

Is it just the starts that need to be fixed here? Are there other things you’ve found you need to work on during this break?
The biggest thing about supercross is there’s just no time. You’ve got to get the starts consistently, and it’s hard to do that. The ruts don’t really develop behind the gate, and I’m a shorter guy so it’s sometimes hard to grip the bike to get a good grip on it out of the gate. It’s just little stuff that we’ve got to work on.

Bad starts alone would be one thing, but then it also seemed like you were down in the first turn or first lap a lot, just dumb stuff was happening, and then one time you got hit in the face by a bike just careening into you. At one point where you just like “Come on, man!”
Oh yeah! [Laughs] For sure. Everything. Hitting the gate, going down in the first turn, all that stuff just sucks. But when I got KO’d by Tyler Bowers’ bike, that’s when I was just like “This is ridiculous.”

So when the West resumes, we can consider you the spoiler.
I’m always a spoiler, Weege!

Hey, you know there’s some history of 250 guys jumping on a 450 at Daytona and going fast—Dean Wilson, Ken Roczen, even Jason Lawrence.
Yeah, I think it’s going to be cool. These guys are gnarly. They’re on their 10th round and haven’t had a week off. I’ve had a break so I guess you could say I’m coming in all full of piss and vinegar.

And next year, 450 deal is still locked in?
Yeah, 450 for GEICO Honda is locked in for next year.

Okay cool. We’ll see you at press day on Friday.
Yeah I’ll be there. Stop by the truck and say hi.

Well yeah but we just need to figure out which truck! I love how you don’t even care about that stuff. You’re not all bragging because you get to work out of the Team Honda rig.
[Laughs] Yeah, I just like doing the work. I get my pride out of my riding and my results.