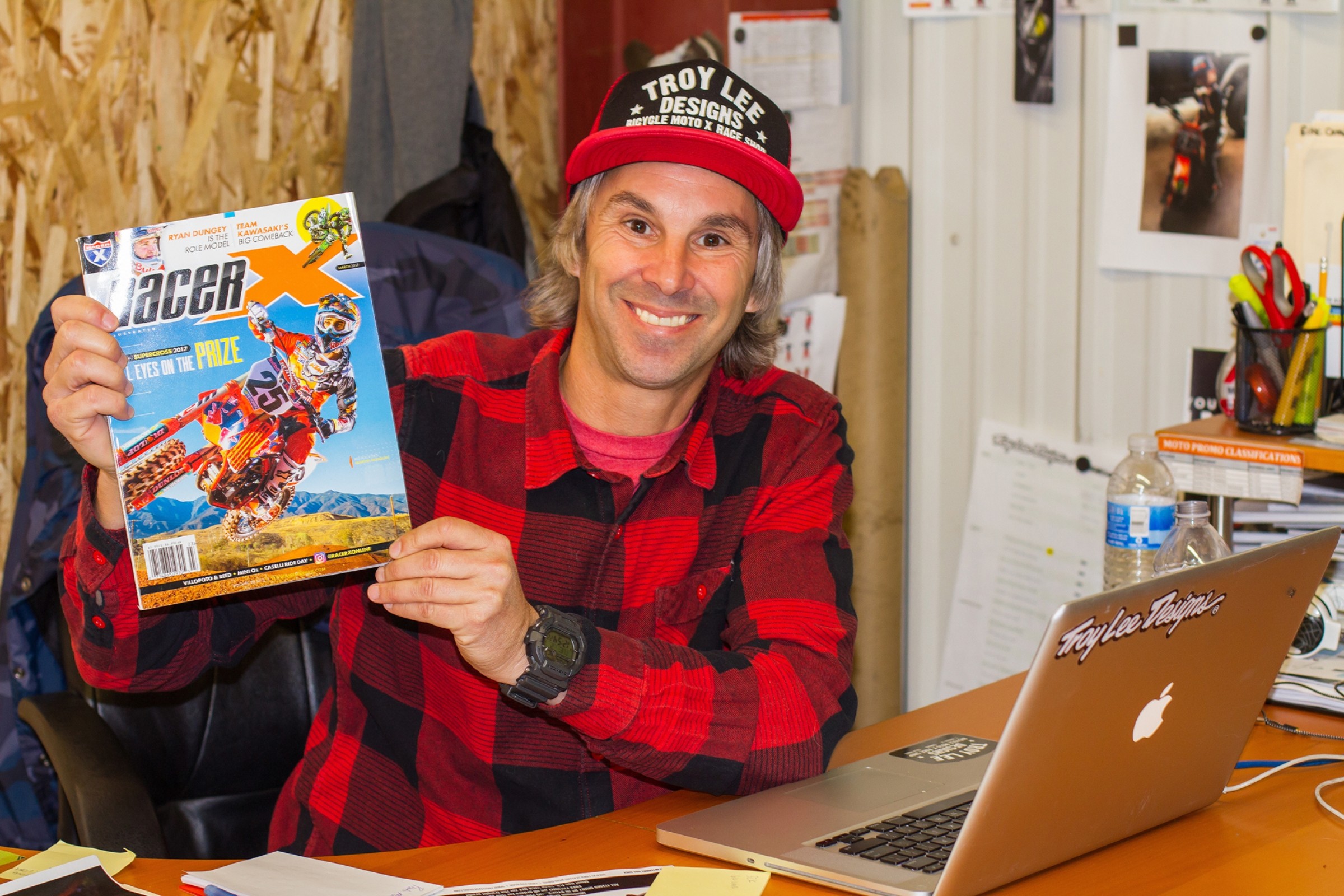 Dave Casella is the marketing manager at Troy Lee Designs and is one of the raddest dudes you’ll meet. Like many of us, the moto bug caught Dave when he was young. He grew up a few minutes outside of Boston, Massachusetts, and as a grom he delivered newspapers on his XR75 before ripping the local trails—I’m sure the neighbors loved that before their morning cup of joe. He always dreamed of living in California so after college Dave packed everything he could in a car and drove to Huntington Beach where he still resides today. After selling his mountain bike apparel company DV8 in 2000 he began working in the motocross industry at Alloy MX.

Between working at Alloy and Troy Lee, Dave spent a decade working with MSR, ANSR, and Pro Taper as off-road director where he’s had success in growing those brands and recruiting athletes. I spent some time with Dave to talk more about his time in the industry and what it’s like working at Troy Lee.

Racer X: How has it been working with all these different brands?
Dave Casella: I’ve loved it. Just in the beginning working hand-in-hand with Malcolm Smith (MSR) was incredible. He really was on board with re-facing the brand and re-imaging it and modernizing it. So he really had my back on a lot of bold moves that we made there. That’s when we out and hired Nick Wey to be the face of the brand on the racing side. That led to getting Kevin Windham. We really built an all-American brand with Wey and Windham as the faces of the brand. It was just the greatest time. Then as I kind of transferred a bunch of my time and effort into ANSR, that’s when we went after James Stewart and brought James onto the ANSR brand and started re-facing the ANSR brand.

Were you part of the whole name change with ANSR too?
Yeah. That’s when we went to the ANSR [from Answer], which started as just on James Stewart’s gear. ANSR was having a lot of identity problems at the time and we really had to do something with the brand. I know a lot of people weren’t really keen with it, but we decided to make the change to ANSR full-time to the logo. That’s where we were seeing all the sales in the re-facing of the brand. So we went down that road with it. I’ve got to say I was really proud of the gear at the end [of my time there]. It had really come a long way. Then I also led Pro Taper during that time period. Pro Taper was strictly a handlebar brand and had just started venturing into foot pegs. Foot pegs were like the second thing they had really ventured off into. That’s when we really took a hard look at it and said Pro Taper should be all things control. That meant let’s purchase brake levers and all that great stuff that Pro Taper started developing. Now it seems like they’re doing better in all those markets.

When did you transition over to TLD?
So then in 2015 I left Tucker Rocky [parent company of ANSR and Pro Taper]. I started a consulting business and was consulting for numerous companies within the industry. I was doing some work for TLD and it just seemed like the greatest fit. I went from a real corporate-style company with Tucker Rocky to a family division with TLD. Just having interaction with Troy [Lee] every day … I just really, really loved it. I knew this was going to be a great spot to be at. So I was fortunate enough that they wanted me to come on full-time and run the marketing department, so I took the leap about two years ago.

How has that transition been?
It’s been interesting. It’s been a lot of fun. Like I said, the creativity level at Troy Lee is just through the roof. The attention to detail that we have here … I have the greatest marketing department that I’ve ever worked with. These guys are just so on point. It’s inspiring coming here every day. You’ve been here at the building and seen what it’s like. You come in and you’ve got the whole museum up front and the retail store, so there’s always super fans around buying stuff. Then we have the paint shop right there. You can watch the guys actually hand-painting and pin-striping the helmets. You’ve got Troy running around, athletes in and out. I love our marketing department out in the shed. The vibe in there is just fantastic.

What’s it like working with Troy?
Working with Troy is great, man. He’s got so much enthusiasm. You would think after 35 years he’d slow down a little bit, but he can’t get enough. His son Max is racing a lot now. Max is here every day. It’s just awesome. It’s just inspiring to sit with Troy. He can either talk business with you or he can talk racing or design. It’s very rare that you find somebody at that level where he’s so in touch with the market and still one of the best designers in the world out there.

Do you get much riding in these days?
My eight-year-old son Skylar is riding a lot now, so it’s inspired me to start riding more. It’s funny how that works. There was a time there were I just couldn’t find the time to get the track or get out to the desert and now with Sky-man riding all the time I can’t get enough of riding with him. I’d rather go spin laps with him or go out to Mojave with him and ride. It’s really brought my interest back on that end of things.

How is it working in the industry?
I’m really fortunate. Every day I just can’t believe the dream I’m living. To grow up in the middle of nowhere in New England and now to be immersed in this industry is crazy. The guys that I grew up idolizing are now people that I work with on a daily basis. It’s crazy when I think about it. Just to put it all in perspective, it’s just nuts. Jeff Ward is here all the time. I was the biggest Ward fan. Now Nick Wey is one of my best friends. It’s just weird. It’s great.