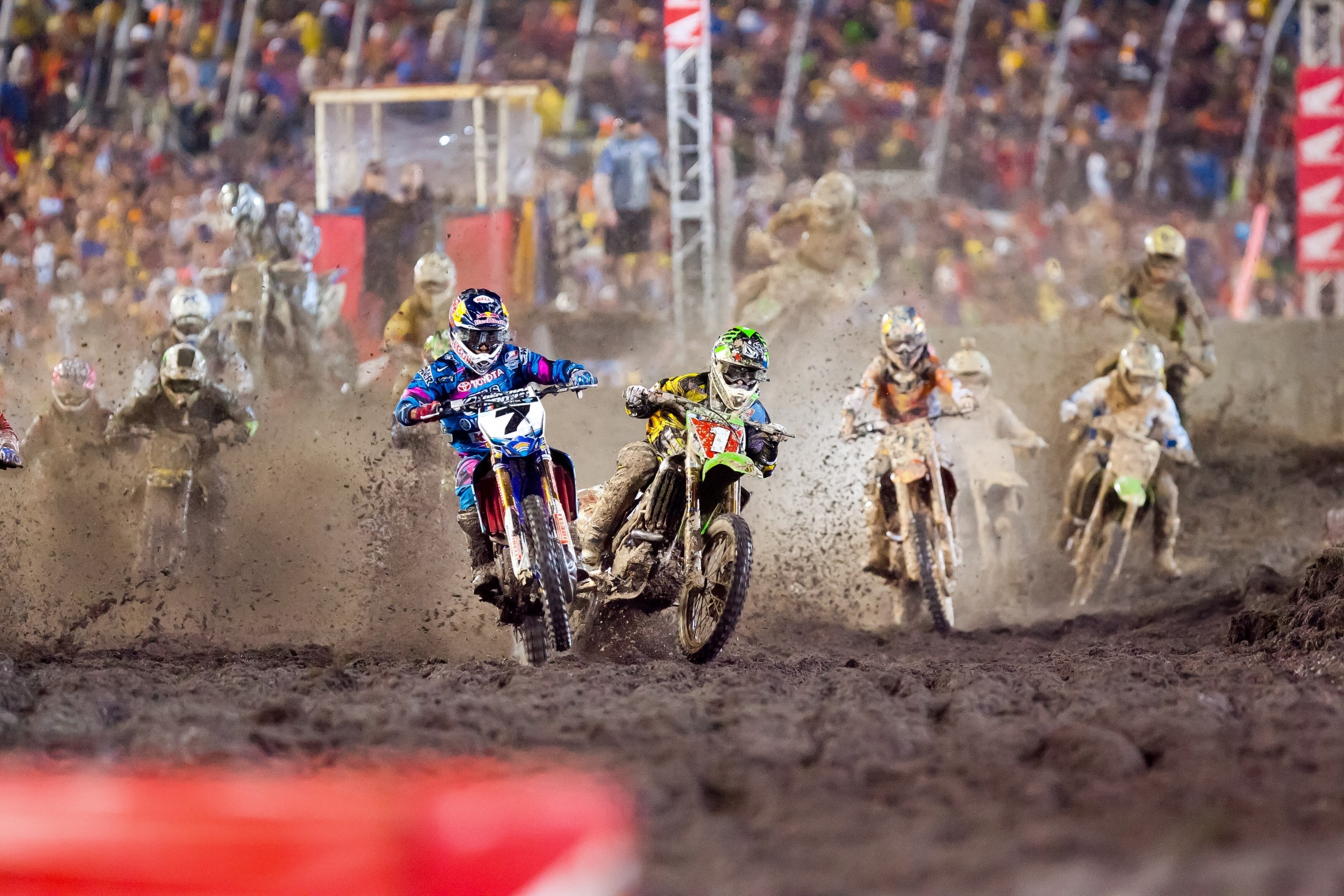 Daytona is Daytona. There is no other race on the schedule like it, and that’s why a win there really sticks out. For example, when Ryan Dungey won it for the first time in 2015, it rang out with a significant “Wow, crazy that Dungey had never won it before,” which is not something you say about any other race. When a multi-time winner like Chad Reed adds to his Daytona total, people notice. Rarely does a rider get recognized for how many St. Louis Supercross wins he gets. At Daytona, they do.

For The List this week, let’s run through the last decade of the Daytona Supercross by Honda.

Lots of hype for this one as it would mark James Stewart’s first-ever Daytona on a big bike, and of course his fellow Floridian Ricky Carmichael and all-time rival Chad Reed stood as the adversaries. Stewart jetted off to the early lead over Carmichael and crashed huge while leading—the Tuff Block softened the blow but made his gymnastic flip look even worse. Carmichael won.

[Note: There are going to be lots of James Stewart stories in this List.]

Stewart got it this time, holding Carmichael at a safe distance the entire way.

The mudder of mudders. It rained all day and then it started raining even HARDER for the night show, and eventually the track was underwater. Chad Reed and Kevin Windham battled hard but Reedy had control by the last lap, when his bike had finally sucked in too much water and blew up. Windham rolled past to his first and only Daytona win—a huge one due to the weather, and also since Honda is the event’s big sponsor.

Almost the upset of upsets—who knows, this one would have ranked right up there with Rick Ryan’s privateer Daytona win in 1987. Jason Lawrence was the 2008 Supercross Lites West Region Champion, but his Yamaha of Troy ride and his career started to fizzle, and his 2009 season quickly became a disaster. He resurfaced on a 450 in the East, and lo and behold when James Stewart kicked off a massive first-turn crash, Lawrence snuck his privateer YZ450F, ahem, way inside (of some of the hay bales, even) and got to the front. After passing Mike Alessi for the lead, Lawrence took off, showing his considerable talent and the sand skills formed in the pits of New Jersey.

For about 13 laps, Lawrence looked like a winner. Then he started to tire and Reed, coming from behind, began to close quickly. With three to go, an exhausted Lawrence pretty much let Reed by for the win. He still held on for second, though.

Bonus! Go to 41:55 and watch Davi Millsaps take out Alessi for the final podium spot.

Outside of Windham’s mudder win on the last lap in ’08, the combo of Carmichael, Reed, and Stewart held a stranglehold on Daytona wins from 2000-2009. Is that crazy or what? Two thousand ten represented the real changing of the guard in this sport in many ways, as Stewart and Reed both did not compete with injury, and the Ryans, Villopoto and Dungey, chased each other around the whole way. Villopoto got the edge at Daytona.

Stewart was back in 2011 to make the headlines again—his jumping of the un-jumpable Gator Pit and then later his crash, his remount when he was all dinged up, and then he re-jumping of the Gator Pit while coming from the back are legend. Guaranteed: you will hear someone talk about Stewart and the Gator Pit at Daytona this weekend.

Oh, meanwhile Villopoto did his usual quiet, effective thing, and won. Stewart got the highlight clips but RV got the trophy.

Stewart’s revenge. James’ time with JGR Yamaha wasn’t great, but for one night at NASCAR’s most famous venue the team with NASCAR roots had its best night ever. On a muddy track, Stewart won and his JGR teammate Millsaps took second. It’s the team’s only 1-2 and, amazingly, still the most recent 450SX victory for a Yamaha.

Personally, I was announcing this race from the sidelines and hopped into the side-by-side cart they use to track the riders down the big straight with TV cameras. The cart maxed out at 59 MPH. Even at that speed, we were still unable to keep up with Stewart or Millsaps while they were jumping rutted triples in the rain.

That Daytona win seemed to put Stewart and JGR back on track, but the next weekend he crashed just moments into his heat race and got banged up. His Yamaha days were numbered after that.

This was Millsaps’ season to shine, as he led the points through the early stages of supercross, a magical run for a Rockstar Energy Racing team running without factory support. It began to come unraveled here, though, as Davi crashed early and could only come back to 10th, handing the points lead to Villopoto, who won again. Later, it would be revealed Millsaps was riding with a bum knee.

Another highlight of this race was 250 rider Ken Roczen, on a KTM 350, getting a start and leading for a bit before fading back to seventh.

The Villopoto guy wins again. He was just as quietly effective at Daytona as he was winning championships, with four wins at the place in a five-year span. Dean Wilson played the “Wow look at that guy!” role run by Lawrence and Roczen in year’s past, filling in on Chad Reed’s TwoTwo Motorsports Kawasaki and taking the fastest qualifying time, winning his heat race, and running second for most of the main before a big fade.

Not much action in the battle for the win here, so let’s go to what everyone wanted to talk about: Mookie versus Barcia!

Hard to believe that it took Ryan Dungey, he of such great fitness and stamina, six attempts to finally win Daytona, but by 2015 everything was falling into place for him. He had a big battle on his hands from fellow KTM man Andrew Short and Honda’s Cole Seely, who rode well early. Later in the race, Eli Tomac charged up to second—this one to be continued next year.

This time Tomac got a better start and he and Dungey battled pretty good early, until Tomac started to get away. That makes Eli the defending Daytona SX Champion heading into this weekend. Are we in for Dungey v. Eli Part III? What if Reed finds that old Daytona magic? What if James shows up???