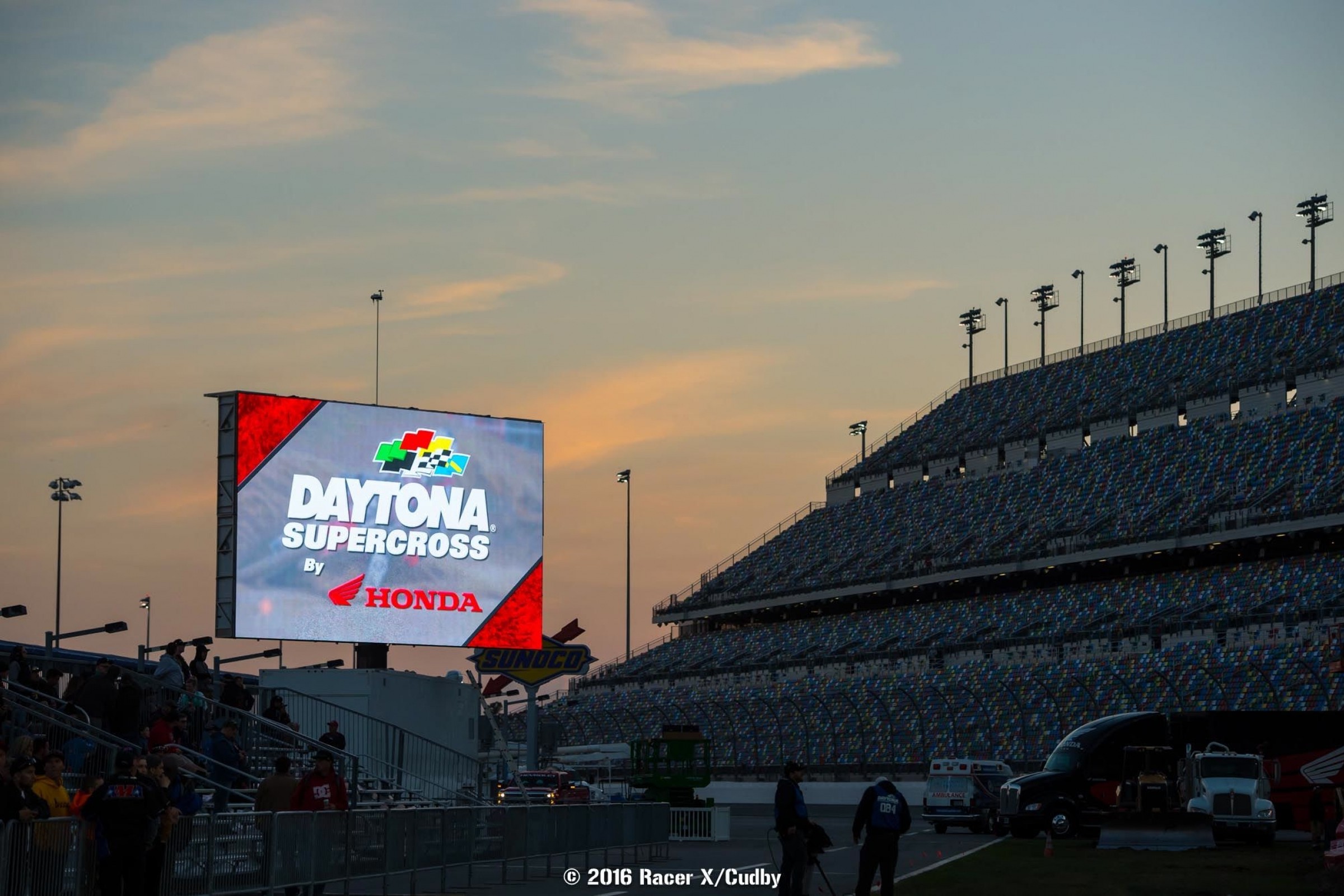 Welcome to sunny Florida! As this is being posted, I am on a plane headed down to my home state for a week of racing. Saturday kicks off with the Daytona Supercross by Honda, Sunday and Monday is the Ricky Carmichael Daytona Amateur Supercross, and Tuesday wraps things up with FLY Racing ATV SX. It’s a whirlwind of racing featuring all skill levels on both two and four wheel equipment. The biggest conversation will of course surround Saturday’s events as Ryan Dungey rolls into town with a 24 point lead. Eli Tomac could make a strong case for the rider with the most momentum but until he can get within striking distance, Dungey will be content to keep clicking these races off at nearly a full race advantage. Daytona has been good to Eli so this may be an opportunity to bring the number down if Ryan has any trouble with the black Florida sand.

The track in Daytona is always a tough one. Ricky Carmichael has taken over design duties in recent years and if anyone knows Daytona, it’s RC. The track has undergone changes in the last decade or two, moving more towards a typical supercross track. In those earlier years, the base was all black sand and limestone was used for the jumps. The jumps broke down badly and wherever the sand met the jump, a huge hole formed, creating a “G-out”. That transition was brutal on riders’ wrists and caused more than a few crashes. That situation has been mostly rectified these days as orange clay makes up most of the base and all of the jumps. It has changed the overall feel of the race, but for the riders it’s an improvement for the most part.

Another change was the length of the track. This track has seen lap times of 1:30 or more, but nowadays it seems closer to a minute. Last year was 1:04 in the main event so I would assume it will be similar this year. With the new timed main events, it won’t matter as much but it really affected the racing in years’ past. The difference between a 32-minute main event and a 22-minute main event seems like a lifetime for the racers.

This year’s track has a little bit of everything. There are several switchbacks to slow things down but there are also some pretty fast sections. Lap times will be impacted by how steep these jumps are and how difficult the whoops are built. They haven’t been too tough recently so I look for that trend to continue. The clay also brings the lap time down versus sand and stays smoother, too. The start is fairly short but that’s been the trend for Daytona. It was in the middle of the track in the past couple of years but has been moved back towards turn 4 for 2017. It loops back into a bunch of randomly placed bumps before crossing back over the start. This was similar to the start design in 2009, but hopefully everyone can avoid the carnage this time.

There is a dragon’s back to single section before a standard supercross triple. The triple is commonly placed in this exact spot followed by a chicane and a couple of doubles into a right hand turn. This is very similar to the 2010 track layout. The next sections are a bit unique and will be interesting to see how they play out. They look a bit easy and a bit fast, leading all the way to the east end of the stadium, or turn 1 of the speedway. A wide 180 leads to several single jumps that will be put together and then what looks to be another supercross triple before a 90-degree left. Several short straightaways bounce in between 180-degree turns. I don’t see much action happening here as the insides will be too fast to make a move. There is a short whoop section in the midst of this that could play a role as the track breaks down, but the length could prevent much action. After that, the lap is finished by a long, fast straight heading back towards the mechanics. This looks to be the best opportunity to get alongside someone and make a pass. Daytona’s straights get rougher and rougher as the day grows long, and rougher sections make passing more viable.

How will Jeremy Martin stack up against the 450 mainstays?

Will anyone be able to fight off the Osborne onslaught?

Which Chad Reed will we see in Daytoner?

Wacko Zacho is en fuego, winning two out of three and comes to Daytona with a 12 point lead.

Adam Cianciarulo enters his hometown race coming off of a second place finish in Toronto.

This guy. This guy is hot.

Marvin Musquin went to Canada trailing his teammate by 25 points, but was sitting second overall in the championship. He left down 39 and lost the second spot to Eli Tomac.

Joey Savatgy won the opener but has had two tough weekends in succession, putting him 12 points out of the red plate.

RJ Hampshire suffered a broken leg and will be out until Hangtown at the earliest.

Similarly to Toronto, Dylan Ferrandis gets aggressive on his way to an autograph signing, knocking down a few Bike Week bikers. The Harley faithful then welcome the Frenchman to Daytona in their own special way.

Justin Barcia holeshots his heat race and sets a new record by taking out the entire field in six laps.