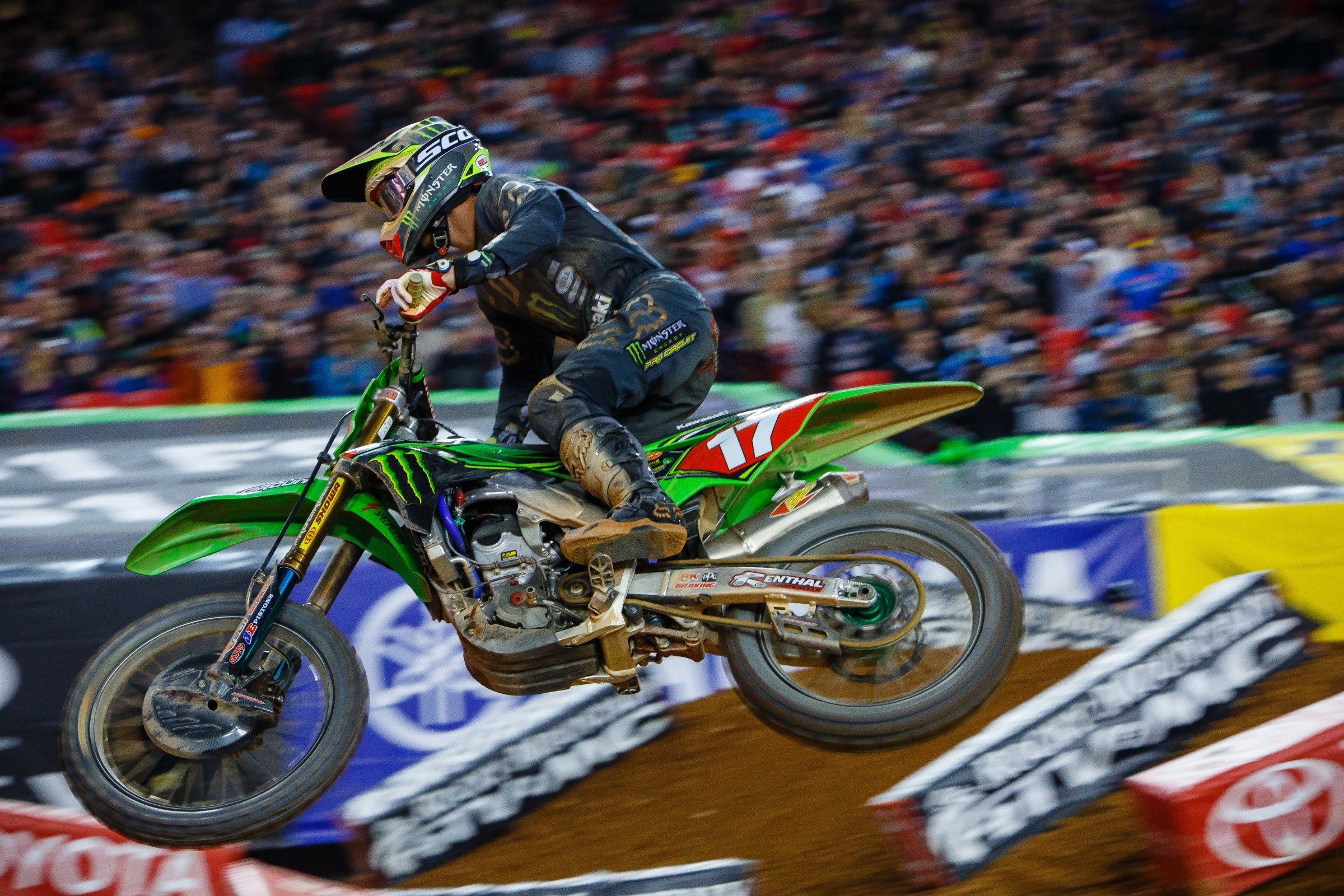 Racer X: You were pretty far back there. Where do you find places to pass?
Jason Anderson: My passes were all pretty good for the most part. Reedy [Chad Reed] fell at the end of the whoops, that was the only one where I didn’t have to actually make the pass. It was tough. There were a couple times when you were going into the sand section where you would kind of double over that knuckle they built, and if they cased it you could downside it and get through.

What happened on the last lap with Baggett?
I came up on him, and I knew it was for third. We know what’s going on, you can look at the board and everything. So last lap, I knew he was going outside after the finish, it was about the same speed, but I knew I could go inside [and try for a pass]. But he read me like a book, man, and he went inside. I knew after that I only had one more chance, that off-camber, and I went for it, and it was too dry, and I couldn’t turn and I slid out.

So he was going outside and you were going inside?
No, he read me like a book there, too! He went on-off, and that’s cool, because, he was smart about it, same thing I would have tried to do. I don’t know, I feel like I should have maybe waited a little bit and tried to BMX the rhythm section and then the triple and maybe try to make something happen there. That would have been my best chance, because the whoops, they were gone. You just had that one line.

Baggett said you gave him the “hey good race” after the finish. Was that just respect for him finding those insides to stop you?
Yeah, yeah. He rode freaking good. At the end of the day, I’m not always a fan of him. But at the same time, you respect what people can do on a dirt bike and the process it takes to get there, because it ain’t easy. It’s cool to see a dude who hasn’t had the best go at it, and that happened to him. You know, I’ve been lucky. Yeah, I want to do better, but I’ve had a pretty good go at it on a 450. I understand how it is to be on the other end of the spectrum, too. – Jason Weigandt

Racer X: With your start, I guess you’ll take this finish?
Joey Savatgy: Yeah, like you said, not a very good start. My fault, no one to blame but me. Not in the points lead anymore but we’re only a few points back, and from where we were the first lap to where we finished, we salvaged. Definitely wasn’t handed to us. So we’ve got to go back to the Farm [Ricky Carmichael’s track] to work on a few things, but the goal is to be here every round. I’ll take it. If tonight’s a rough night or bad night or bad start night, I’ll take it by any means. – Steve Matthes

Racer X: Were you freaking out after you and Alex [Martin, teammate] came together? Or are you okay with it?
Jordon Smith: [Laughs] No, I feel like it was more of a racing incident. If I wanted to avoid that situation I should just ride better than that before it happened. I feel like I had the speed for him not to catch me tonight, and then once I got back by him there, I made that mistake in the corner, and that’s what let him get next to me there. I’m still getting used to it because I haven’t been up there like that a lot. That’s not things we can practice at home. Once we got together, it was just a racing thing and I should have been more aware, maybe tried to square him up or something. We still had a couple of laps left, and we were all getting pretty tired, and the track was getting pretty gnarly. Same turn that Ryan [Dungey] was talking about, we were down to the concrete. So, you know, it was tough out there. But it was a good night, could have been a little better, but we’re only seven points down in the championship and if I keep getting these good starts and can figure out how to keep it together the whole race we should be good.

Does it sting a little more now because you got second last week, you’re in the championship hunt, and every point counts?
Yeah a little bit, but for me it’s not so much about the championship this year—I mean, obviously I would love to win it—but it’s more about just learning to be consistent. I knew that I had the speed to run up there, and I was more bummed at myself because I rode the first four or five laps pretty good, and then I just got tight and kind of cautious. I mean, Zach [Osborne] was riding really good tonight and so was Alex, but I feel like I could have hung onto Zach a little better and not had to worry about anyone behind me. – Weigandt

Racer X: Roger, all of us are talking about what’s wrong with Ryan Dungey, maybe nothing? Tonight was a good ride, holeshot, took off for the win, and a much-needed win at that.
Roger Decoster: Yeah, we needed the win because there was starting to be some doubt. He was finishing on the podium, but it was not Dungey from last year. I feel like today he’s starting to turn things around, it was good to open up the gap a little bit again.

With the timed main events the tracks haven’t been holding up so great, and Dunge mentioned that in the press conference, that’s one thing he’s had to deal with this year.
Yeah the tracks, they’re the same for everybody. But they definitely have not been easy. Today the start was fine, but the last few races the starts were quite dangerous. You know, there’s a fine balance between staying aggressive and being too aggressive and staying in the championship. It’s not been easy, but it’s good to see him win again. I feel like our equipment is working good. We just need to keep working.

I felt today was the best we’ve seen Trey Canard. Bad start in the main and maybe tough to move forward, but I thought tonight was the best we’ve seen him.
Yeah, you know he will tell you he’s not quite there with his fitness, he’s not been able to do so much racing, but he’s definitely moving in the right direction. He’s happy with his bike setting now, and to get a good setting you have to have the speed to get a good balance. He’s a good person to be on the team. He’s a good person and a happy person. Although he missed some races, I’m happy to have him on the team, and he helps to have another person to compare settings with. He’s a cool guy. Also, Marvin [Musquin] has been good this year. Today a horrible start and he came back to fifth place. He still wasn’t happy of course, but he’s hanging in there and it’s only his second season on the big bike also. We could see it coming in testing and practice [during the off-season]. He had speed. What he mostly needed to work on was on a bad day limit the damage, so that the valleys aren’t as deep. Because we know he has the ability.  — Matthes