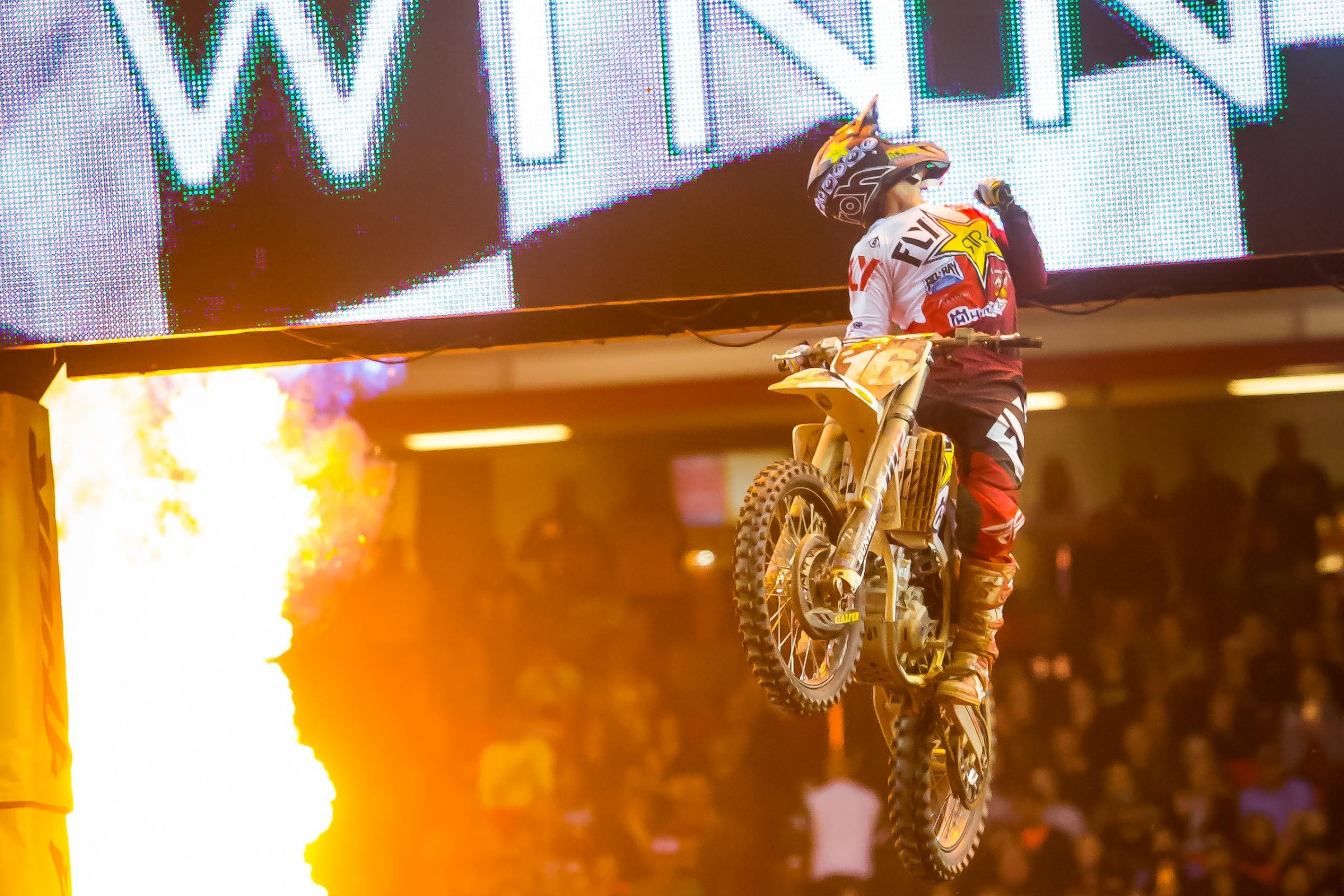 “Yeah, my whole life is kind of like that, sort of like Forrest Gump,” said Zach Osborne after taking his first professional win in the United States, at Budds Creek last August. Budds already had a lot of history with Osborne, as 10 years earlier, as a rookie, he led the first moto for 20 minutes only to pull one of the all-time fades in the sport’s history, wilting all the way back to 18th at the finish.

To finally get his first AMA National win at the same track, 10 years later, was a weird full-circle situation not lost on Osborne. “My mom compares me to Forrest Gump all the time. Just irony everywhere. So to win here 10 years later, it’s gratifying. It’s ironic. It’s a lot of things. It’s really cool. I told my parents, I feel like I need to win at Budds Creek before I can win anywhere else. Get the monkey off my back. Made it happen.”

With the monkey off the back outdoors, the door was open for another milestone, finally getting that first career supercross win. He was fast enough last week in Minneapolis, he was close at other times through the years, but maybe, like getting it done outdoors at Budds Creek, he needed to rip the supercross band aid off in Atlanta. You see, nearly 20 years ago, Osborne won the KTM Jr Supercross Challenge in the Georgia Dome (on a 50). This was the last Georgia Dome supercross. He needed to get it done now, and he did.

“It’s amazing to come here. I won the KJSC here in 1998,” he explained. “It’s been a dream of mine ever since to win this race, and for it to be the last race in the Georgia Dome … I could go on for an hour but it’s unreal. I’m grateful to be in this position to have this opportunity and just be where I’m at. It’s unreal.”

As a pro, Osborne had only raced in the Georgia Dome one other time, in 2007, which was his first supercross inside an actual stadium (he tried Daytona the year before).

Yeah, it’s taken a lot of years for Zach to get here but it’s key to remember his U.S. career took a three-year detour through Europe and the FIM World Motocross Championship. Osborne was a hot amateur prospect here, but his early years as a pro weren’t good, featuring just two top-10 finishes in his first three seasons. Over in Europe, he finally found himself (and even took that elusive first career pro win at the Grand Prix of Istanbul in 2009). The Virginia-born racer always kept an eye on returning to the U.S., and in yet another full-circle situation, he nearly had a ride to do it, on the same Rockstar Energy Racing team he rides for now.

“At the end of 2011 I actually had a deal lined up with Rockstar Suzuki at the time, which is the same team that I’ve ended up on now,” he explained. “But I told my boss [in England] I want to eventually go back to America and this is a perfect opportunity. It’s a good team. I told him I have to take it. He was super bummed obviously. We came to the agreement that if I would stay and do one more year in the Grand Prix that he would bring me for four races to kind of showcase my skills and then we could go back and race Grand Prix.”

So Osborne had four races to show his supercross stuff to the industry, and, oh by the way, he hadn’t actually raced supercross in four years and even back when he did, he was hard pressed to even get top 10s. Oh, and he was on a GP team, so he had to figure out a way to build a bike for supercross.

“Looking back, yeah, it was a bigger gamble than what I had realized at the time. It could have gone bad easily,” he explained now. “I was on a completely private bike that we built in my garage in South Carolina. It could have easily gone the other way. Looking back now, it was a big gamble. Honestly at that time I didn’t even consider it a gamble. I just knew we were going racing and that’s what I wanted to do. Maybe young and dumb in that situation.”

Amazing, despite four years away, Osborne was fast immediately. He was third overall in 250SX qualifying at the first two races that year, right in the mix with riders like Cole Seely, Jason Anderson, Dean Wilson, Ryan Sipes, and more. He was on the podium at rounds three and four. He bet on himself and he came through. There was interest from a variety of teams, but GEICO Honda won out, signing him to a deal for 2013 and 2014. He switched to the Rockstar Husqvarna outfit for 2015.

Osborne in America 2.0 has been good, but he needed to find that one last step to start winning races and contending for titles. Enter Husqvarna and KTM’s alliance with Aldon Baker. Osborne got the nod to take the Baker’s Factory 250 slot, and clearly he’s done great things with it. He looks leaner and meaner this year, but the physical side isn’t even the point. Osborne told me that while the training is hard, he’s actually worked even harder in some past years, “Because I’m a meathead like that.”

The real difference is getting to ride every day with fast 450 riders Ryan Dungey, Marvin Musquin, and Jason Anderson. They push each other, but especially Zach, who has to lock horns with them daily on a 250. “And they will bang bars with you when they have to pass you,” he says.

We’ve heard about the Baker “everyone riding together” program ad nauseam, so we don’t need to go too far down that path. But the real question is, if simply riding with other fast riders is the biggest key, why doesn’t that seem to work as effectively anywhere else?

“Because there aren’t many riders at the level of Ryan, Marvin, and Jason, who will just check their ego at the door and ride together every day,” says Osborne. “There are a few, but not many.”

Over 10 years into his professional career, Osborne is well past the point of ego, as well. He’ll take the bar banging from those guys if it makes him better. Plus, he’s already been through much worse. For the moment, going full circle has finally gotten him out front.