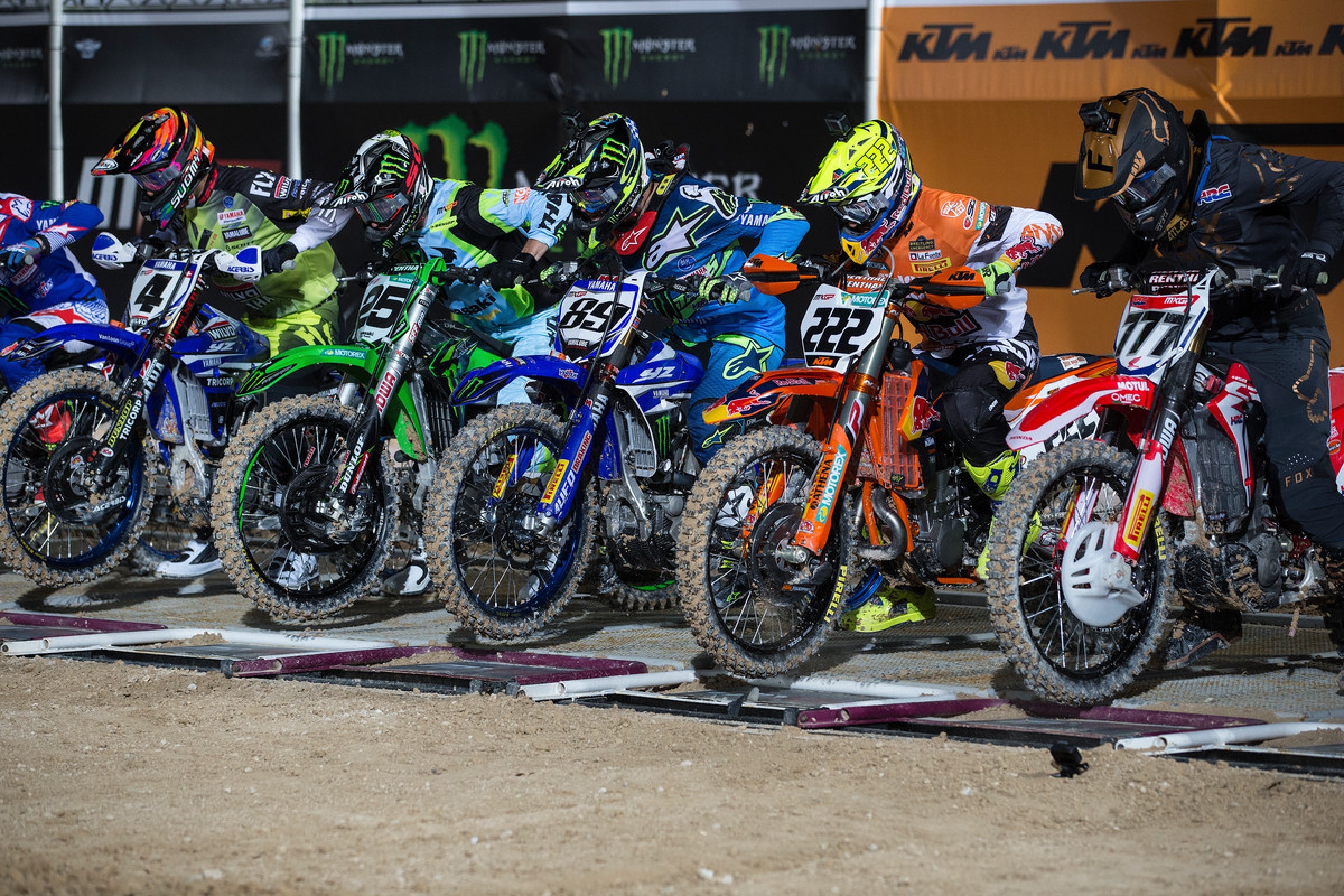 Red Bull KTM could not have been more emphatic in the opener of 19 dates in the 2017 Grand Prix season as both Antonio Cairoli (going 1-1 for the first time since last May for his 73rd career success and ensuring a 13th season streak of at least one win per year) and Pauls Jonass (in contrast, a career first for the 20-year-old with his 1-1 and a piece of history for Latvia also) conquered the night in Qatar.

MXGP opened in the Middle East and in the confines of the pristine and accommodating Losail circuit for the fifth year in a row and—if paddock talk is to be believed—the last time in the small nation of Qatar. If there was a slightly subdued vibe about the event and its place in the FIM World Championship landscape, then the sporting side was plum with the usual hype and speculation as to what could be served.

The premier class boasted just enough riders to fill the scoring chart, but was at last a full picture of Youthstream’s vision of having the best-of-the-best on show. Eight of the riders from 11th to 21st in the second moto had Grand Prix winning experience.

“We didn't have many riders but they are all good ones,” Cairoli said after the race. “I think this is the most competitive MXGP class for I-don't-know-how-many years. It will mix up the points this season.”

There was little hyperbole about the Sicilian’s words; the pedigree on display was clear to see and the similar lap-times among the entire group indicated that starts were absolutely golden for designs on the upper echelons of the classification.

Mistakes were also costly as Romain Febvre (two in the first moto), Glenn Coldenhoff (first moto brace of errors), Shaun Simpson, Arnaud Tonus, and others discovered. Of course, the perils of a short but stellar cast is when injury strikes and attrition becomes important. Suzuki already lost Arminas Jasikonis to visa problems at the border. Red Bull KTM’s Jeffrey Herlings—a rider than had won every MX2 Grand Prix in Qatar—came to the race with a swollen right hand courtesy of a broken fourth metacarpal bone and plate inserted only 10 days before the race. It was not the debut that the MX2 world champion envisioned, but brave outings with pain, arm-pump, and rustiness delivered 13 precious points. The #84 learned how each digit can really count come the season-end the hard way during his years in MX2.

Oddly, rainfall in the build-up to the Grand Prix and again on Saturday evening meant Qatar was not the usual desert-type experience. The watering served to soften a track that had been refined and quashed of its stony content, but offered a bizarre test of slick hard-pack, loamy grip, and immense ruts; the second MXGP in particular looked especially brutal.

On this stage Cairoli carried a degree of swagger. Fresh off of dominating the Italian Championship and finally in full sync with the works 450SX-F and his health (the left arm nerve damage that unbalanced his riding in 2016 now all but gone) he came into a race that he has never won as a hot favorite. He kept cool behind world champion Tim Gajser (who was suffering from a cold) on Friday night's qualifying race, but blasted away with a holeshot in the first moto on Saturday. His window reached 13 seconds over Monster Energy Kawasaki’s Clement Desalle at one point, and he tailed it down to almost nine by the flag, which was still the largest margin of victory in any MXGP moto at Losail.

According to several riders the course provided one racing line and, combined with the competitive speed of the class, it meant a bouts of follow my leader in the running. Cairoli made a slight mockery of that dynamic in the second moto. On the new CRF450RW Gajser stole away like some expert Ninja (his distinctive and outlandish black and copper Fox gear gaining deserved attention) and Cairoli remained in tow. At one point the KTM man gave up two seconds in one lap to the defending number one, but Cairoli later explained that brief contact between the pair on the rhythm section led to a crunching noise and the #222 believed he had a broken front wheel. Some laps and examination to reveal it was only a stone affecting the front disc—or so he claimed—Cairoli decided to turn up the gas, banish a four second deficit to nothing with some inventive choices and blew a lagging Gasjer to the reeds with less than two laps to go.

“I was destroyed in those last two,” said an ailing Slovenian who could offer zero resistance.

“He made a gap but I had some energy, changed some lines and rode a bit better in some places,” Cairoli described. “I could come closer again and make the pass.”

It was a throwback to the Cairoli of 2009-2014. He came to Qatar in 2015 slightly irked by the overblown fuss about his role against Ryan Villopoto and arrived in Losail in 2016 out of shape, unsure, and unconfident. This performance made up for lost time and it was somehow fitting that he added Qatar to his canon. Cairoli’s press officer Lorenzo Resta informed the media that #222 lost the red plate as series leader at Qatar in 2015 and gained it back for the first time last weekend. A fitting omen perhaps.

Gajser, who admitted he was feeling the pressure of his status prior to the GP, showed enough on the gorgeous Honda that he will have plenty to say again in 2017. In spite of his illness he was the only athlete to draw close to Cairoli’s authority. Febvre was a much better third place in the second moto, Gautier Paulin made a solid if unpolished debut on the Rockstar Energy IceOne Husqvarna, Jeremy Van Horebeek was his normal, reliable top five-six presence and Evgeny Bobryshev was also typically resilient.

In MX2, Pauls Jonass rode flawlessly despite intense pressure from predicted championship rival, Kemea Yamaha’s Benoit Paturel. Just over a second split the racers at the flag in both motos; Paturel cutting a figure that was content with his best ever moto scorecard, but also dismayed to be within grasping distance of victory also. Jonass celebrated with coach and mentor Marc de Reuver by the podium as the pair were also joined in the winner’s circle by Julien Lieber. Now operating out of his own JLT team with a sticker-less KTM and guided by Yves Demaria, the Belgian returned from being the forgotten man of the class to be another strong element of the young and green MX2 pack.

Suzuki’s Jeremy Seewer (12-5) could not get the starts on the RM-Z250 to be competitive, but his Australian teammate Hunter Lawrence was watchable with his style and sixth place in the second sprint.

Thomas Covington, the only rider in the class at Qatar with GP winning experience, rued a front end slip that cost him positions in the first moto and was desperately unlucky not to post a top five result in the second due to a technical problem with his FC250. Brylyakov’s teammate Darian Sanayei hovered around the top 10 for his maiden Grand Prix as a full-time member of the MX2 pack.

Thailand makes way for Indonesia and the first trip to the country for Grand Prix in 20 years as MXGP continues east for the second flyaway out of four that open the 19 round calendar. A new facility in Pangkal Pinang is bound to welcome attention and a wealth of public normally feverish for motorcycle racing. MXGP will also head to Argentina and Mexico before the European stint of the schedule begins in April.