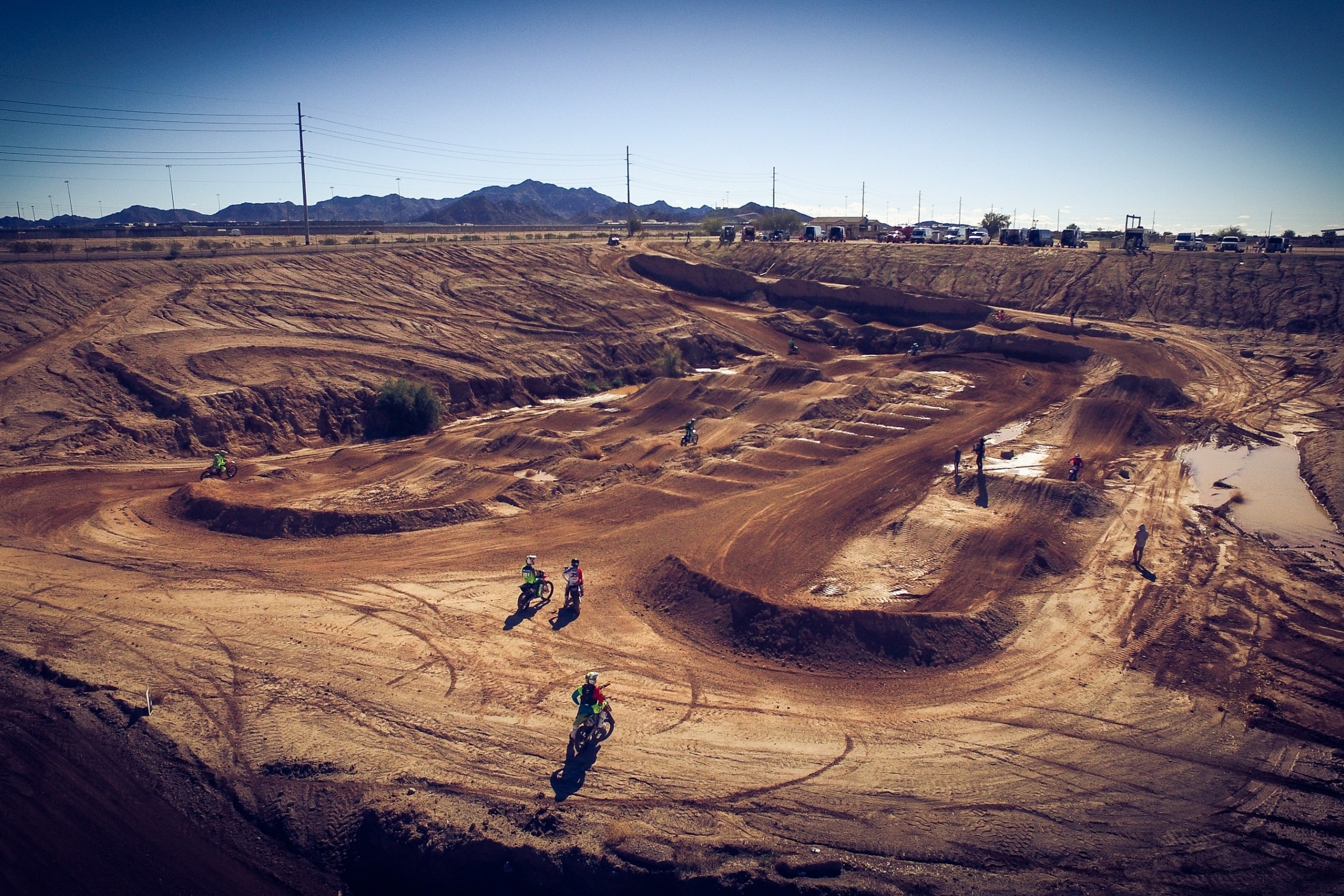 Eli Tomac needed a change, and he was going to get one, like it or not. There was too much rain to ride in California, so he headed all the way out to Arizona Cycle Park to get some riding in. The Monster Energy Kawasaki team says they only made the trek from California to Arizona to avoid the rain, but they might have stumbled onto something else. The new environment might have helped break them out of the mold. Instead of a perfect, manicured, groomed and pristine factory track, Tomac and company found a track that had multiple race lines built in, and bumps that more closely resembled a real SX race track late in the main. In fact, Austin White, whose parents own the track, tells us he was about to jump in the bobcat and fix a corner, and Tomac told him not to, because the ruts and lines in the corners felt more like racing lines.

Monster Energy Kawasaki team manager Dan Fahey told me the move to Arizona for the week was first made strictly due to weather, but it might have turned out for the best for other reasons anyway. Tomac and the team made big bike changes for round four, and all of those changes wrapped up to a dominant victory on Saturday night.

White told us that Weston Peick was the first of the top riders to hit ACP during the California rain a few weeks ago. When more rain came, the track promoted things a bit, and the crowd grew.

“The first day we had 15 guys, it was like [Shane] McElrath and [Austin] Forkner, it was pretty good,” says White. “But then the next day everyone was hitting me up. The second day was out of control; it was like 22 guys. Everyone showed up—GEICO, Kawi—I guess that’s when it went all crazy. Then on Thursday, my dad said there were like 30 guys out there! But I guess that’s kind of like a regular race day, anyway.”

What’s crazy is that while all these guys were busting out laps at Arizona Cycle Park, a second track in the state, Motoland, also did some hosting. Justin Brayton was the ring leader for that group, and he, like Tomac, thinks jumping on a different track helped him make better decisions on bike setup.

“Honestly, some of the time at the test track, we do so many laps on that, they could throw us a setting that is totally [out of] left field and we ride it okay because we know the track so well,” Brayton says. “We know exactly where this hole is or that hole is. We know exactly how to hit this rhythm.”

After Anaheim 1, Brayton, Ken Roczen, and Cole Seely flew out to Arizona to ride Motoland, while Honda HRC’s Lars Lindstrom and Andrew Short drove some bikes out for them (and Shorty hopped on and did some testing, too).

Brayton described the Arizona runs with Seely and Roczen as a “guy’s trip,” complete with some training, riding, and rounds of Top Golf when it was over.

“It was really, really fun,” he says.

When it rained again before Phoenix, Brayton asked Seely if he wanted to do it again (sadly, Roczen wasn’t going to be making the trip this time), and they decided to go for it since they had to go to Arizona for the race anyway.

“If we didn’t have to race in Arizona, we might have gone to the Alessi’s track in the high desert in California, but since we had to be there it made sense. We played Top Golf again and had a good time.”

Brayton first made the Arizona trek way back in 2007, when he had just joined the MDK KTM team. He drove out there with Tyler Keefe, today the team manager for Troy Lee Designs/Red Bull KTM, but back then a privateer racer.

“Troy let me borrow a box van to drive out there,” says Keefe. “I ran that box van out of gas! And I scraped the roof at a gas station!”

“I’m pretty sure from what I’ve heard Ted Campbell back in the day had this track built,” said Brayton. “So it’s an older track for sure but it’s been redone a couple times and groomed a little bit here and there. But it’s the exact same layout as when I came over with Tyler Keefe in ’07. It’s actually really good. There were holes in this track. The whoops were super nasty. So it’s kind of like the race, honestly.

“With longer main events like tonight if you went and looked there’s holes and the whoops get kind of nasty,” he continued. “So it’s actually better. Sometimes it’s nice to go to the test track and pound out your laps and get out of there. But for me I love riding different places. I think you get more of a feel for your bike and your body reacts a little bit different. It could be a little bit tougher. You hang on a little bit tighter. You just don’t know it as well, and that’s a good thing.”