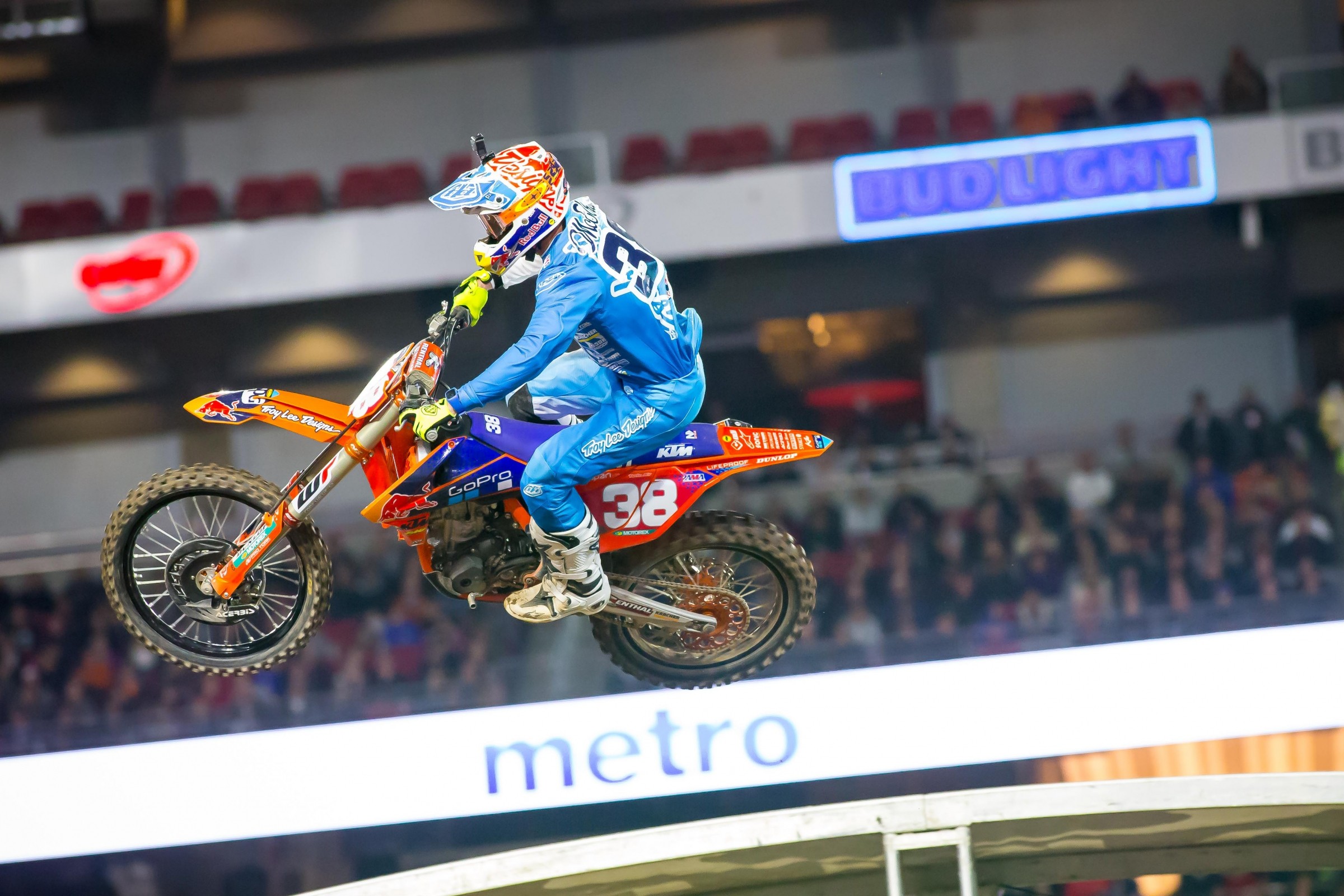 A big stadium with a roof in Phoenix allowed the Dirt Wurx crew to build a track with wide turns, long straights, and big rhythms without any reason to tame things down due to weather concerns . The track allowed for some great racing at the front of the pack in the 250 class and everywhere except the front in the 450 class. Eli Tomac laid down a blistering pace at the beginning of the race to stretch out his lead as Cole Seely, Ryan Dungey, and Chad Reed shuffled around behind him. Tomac was the only rider to break the one-minute barrier and he did so four times in the main event.

Eli Tomac struggled to maintain his pace in the first three rounds. After Anaheim 1, he admitted that he succumbed to the evils of arm pump after the opening laps. In San Diego, he again faded late in the race but didn’t comment on the cause and it was a similar situation at Anaheim 2. In an effort to see just how much he was fading, we compiled Tomac’s average lap time for the first half and second half of three races this season (Anaheim 2 was excluded, as lap times were skewed due to a long red cross period for Ken Roczen).

You can see Tomac made major strides forward in being able to maintain his race pace for the entire 20 minute plus one lap main event in Phoenix, dropping his difference down to 1.2 seconds. There are a lot of reasons a rider’s lap time can increase throughout a race—such as lappers or track deterioration—but when you compare Tomac to the current 450SX points leader Dungey at San Diego, it’s clear that Tomac was struggling. In San Diego, The difference between Dungey’s first and second half averages was .932 seconds compared to Tomac’s 2.00 seconds. When you consider San Diego’s main event ran 24 laps, a 1 second per lap difference in average times in the second half of the race equates to a 12-second gap right there. Tomac hasn’t denied his struggles and is relieved to have found himself at the front of the pack once again. “These past three weekends have been pretty embarrassing for myself and as a racer, so I feel like at least I’m back to some fighting form,” he said after Phoenix.

Keeping with the consistency theme, let’s analyze Dungey’s Phoenix performance in the first two rhythm sections after the finish line. Take a look at the segment times for Dungey, Tomac, and Reed in the second segment of the track which stretched from the start of the first rhythm to the ski jump back onto the start straight (the section in red here).

Dungey was noticeably slower than second and first place through this segment mostly due to the first two rhythms. In the first rhythm, he couldn’t seem to find a line that he was comfortable with. He tried everything from going 3-3-3 to 1-2-3-3 and even went 2-2-2-2-1 at one point. The next rhythm is where Dungey really lost time. Tomac and Reed were able to consistently nail a 3-4-3-2 rhythm while Dungey struggled to cleanly triple in, which killed any chance of nailing the quad. Whether it was a bike setup issue or just an off night, it’s pretty obvious that these rhythms kept him from staying latched onto Reed. “I knew I was losing a lot of time in that one rhythm lane, but overall just tried to tow in with him [Reed],” said Dungey. “His bike was hooking up good and he just had it down.”

While Tomac pulled a huge gap on the rest of the field, Cooper Webb and Marvin Musquin were glued to each other from the second lap all the way until the end of the race.  Musquin would eventually give Webb some breathing room at the end of the race as he dropped off the pace just slightly. Take a look at their near mirror image lap times for all 20 laps.

Webb had this to say about the battle: “Me and Marv actually battled the whole race. I ended up getting him with like three to go, but we passed each other at least four times each. It was pretty fun.”

In the 250 class we saw yet another good race that extended past last year’s 15-lap limit. Austin Forkner jumped out into the lead early after grabbing the holeshot, but was quickly put back a position by Shane McElrath who led for most of the race.

While McElrath led for most of the race, Justin Hill slowly chipped away at his lead and made the pass on the second to last lap. Hill couldn’t have won in a more different way than he did at Anaheim 2 where he led every single lap. In Phoenix, the results sheet will show him as the leader for the last two laps but he really only made the pass with a lap and a quarter to go. Hill made the pass at the end of the whoops by pinching McElrath into a lapper which prevented him from getting the drive back out onto the start straight. This cost McElrath 1.2 seconds through that segment and prevented him from repassing Hill in the next corner before the mechanic’s area, which we saw several riders do throughout the night. McElrath had this to say about the lapped riders: “Yeah, that’s all I had. It wasn’t anything on my part, just ran into lappers like you said. I just knew this guy [Hill] was back there laughing at me trying to zig-zag in and out of people.”